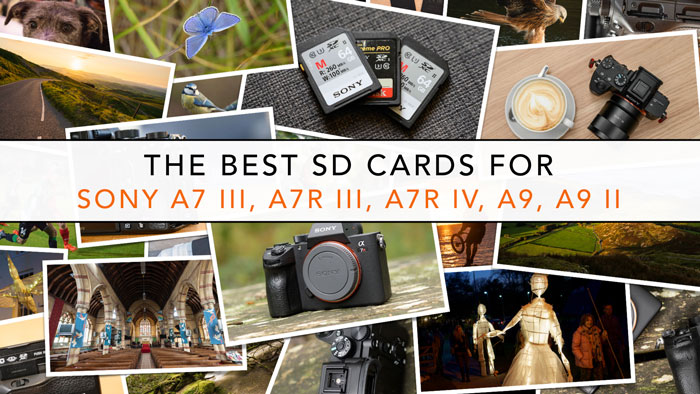 Memory cards are the most important accessory you can buy for your camera for a simple reason: they save all the photos you record. This means that having a little bit of knowledge about memory cards is not a bad idea.

SD cards come with a lot of specifications and there is often confusion surrounding them. The truth is that you don’t always need the most powerful or fastest SD card on the market to get the best performance from your cameras.

In this article I’m going to point out the important things you need to know in order to decide which memory card for your Sony A7 III or other A7 / A9 models suits your needs best.

Ethics statement: We own the A7 III and A7R III models, and we’ve tested many other Sony cameras and used countless of memory cards over the years. We were not asked to write anything about this product, nor were we provided with any sort of compensation. Within the article, there are affiliate links. If you buy something after clicking the link, we will receive a small commission. To know more about our ethics, you can visit our full disclosure page. Thank you!

1. Card Requirements
2. The Best Memory Cards for your A7 camera
3. The Best SD Cards for Video

The A7 and A9 Alpha cameras are compatible with SD, SDHC and SDXC memory cards. Mini SD cards can be used with a SD to Mini SD adapter case.

The main difference between the three types is the maximum capacity. SD goes up to 2GB, SDHC up to 32GB and SDXC up to 2TB. The SD units (the first to be released) are now discontinued. If you have an old card at home, it can work for still shooting but the writing speed might be too slow.

Note: you can also use Sony’s Memory Stick Pro cards but they don’t have the same fast writing speed, and the capacity goes up to 32GB. Sony will probably discontinue them at some point. So unless there is one lying around at home that you want to use, get an SD card for your Sony A7 III or any other model.

There are different terms related to the speed of the card: Class, U, UHS, V30 to V90 as well as the maximum write and read speed. In most cases, you’ll want a card with the following specs:

About the need for speed
As I mentioned in the introduction, I don’t believe that you need the fastest card on the market for your A7 camera. Granted, a faster speed can give you peace of mind, can help the camera clear the buffer more quickly, or can shorten the amount of time needed to transfer your files to your computer (assuming you have a fast card reader. But in my experience, not having the fastest card on earth never turned out to be a significant limitation. Of course there can be some cases where it will help, and I will elaborate on this further down.

Then we have the capacity. Most of the time I use 64GB cards as this amount of space is the sweet sport for my work. I’d consider a larger card for large files such as the RAW files of the A7R IV or if I’m going to record a lot of video.

A 32GB card will cost a bit less of course, especially if you want to buy two. However consider that 64GB versions are not much more expensive, so if you want peace of mind about space, get a 64GB card, it is plenty for most applications.

Below are two tables that show you the approximate number of images and video you can record for each A7 camera on a 64GB card (the data is taken from Sony’s support website).

The A7 III numbers are valid for the A9 series, A7 and A7 II models, whereas the A7R III is valid for the A7 II as well. I haven’t included the A7S series, but given its 12MP of resolution, all you need to know is that it can save a huge amount of images in a 64GB card.

The Best Memory Cards for the Sony A7 III, A7R III, A9

Trying to understand, analyse and choose a card based on all the technical terms and classifications will give you a headache. Fortunately there is a simple truth that will guide you:

An SD card with optimal specifications, that allows you to record images and 4K video at the maximum quality, can be found for very little money.

By little money I mean that they start from about $12. So rather than worrying about what’s good enough or wondering if you really need more space, let’s analyse the real case studies.

I recommend the Sandisk Extreme Pro 64GB (black) that I have been using for ages. It has has a writing speed of approximately 90MB/s and the new version has a read speed of 170MB/s. The 32GB version costs less.

For occasional video recording these cards will deliver good performance on all cameras. For continuous shooting, they’ll do fine on the A7 III and A7R III, whereas they might slow down a little with the higher resolution of the A7R IV, or the 20fps burst speed of the A9 series.

Get a UHS-II card.

The faster writing speed of the card will clear the buffer more quickly when shooting in continuous mode. The card I’m using is the Sony M series (64GB), which has been updated with a faster writing/reading speed (150MB/s and 277MB/s).

Sony A7 I and A7 II series are compatible with UHS-II.

If continuous shooting is part of your daily workflow and you use a camera with high resolution such as the A7R III / IV, or very fast burst speeds like the A9, it might be worth investing in a UHS-II card with even better performance such as the Sony Tough series or the Sandisk Extreme Pro UHS-II that reaches writing speed of 260MB/s or more.

Depending on how long your working day is, also consider a card with more capacity than 64GB.

Whether you’re planning to record 4K video at the maximum quality or Full HD at 50p, get a UHS-I U3 Class 10 card with 64GB, 128GB or 256GB of storage. The writing speed will be more than enough, and you can save some money for a second card or one with larger storage.

Why am I not recommending faster cards for video?
The highest quality of video recording is XAVC S 4K at 100Mbps (megabits per second). The memory card write speed is indicated in megabytes per second, which is different from megabit.

1 byte equals 8 bits. So recording 4K at 100Mbps (megabit) means you’re recording at 12.5MB/s (megabytes). A UHS-I card with a writing speed of 90Mb/s like the one I recommend is more than enough, even if the card doesn’t always reach its maximum speed.

If you want to know more about the Sony A7 III, A7R III and the other full frame mirrorless cameras from the brand, check out the articles below (yes, there are a lot of them!).