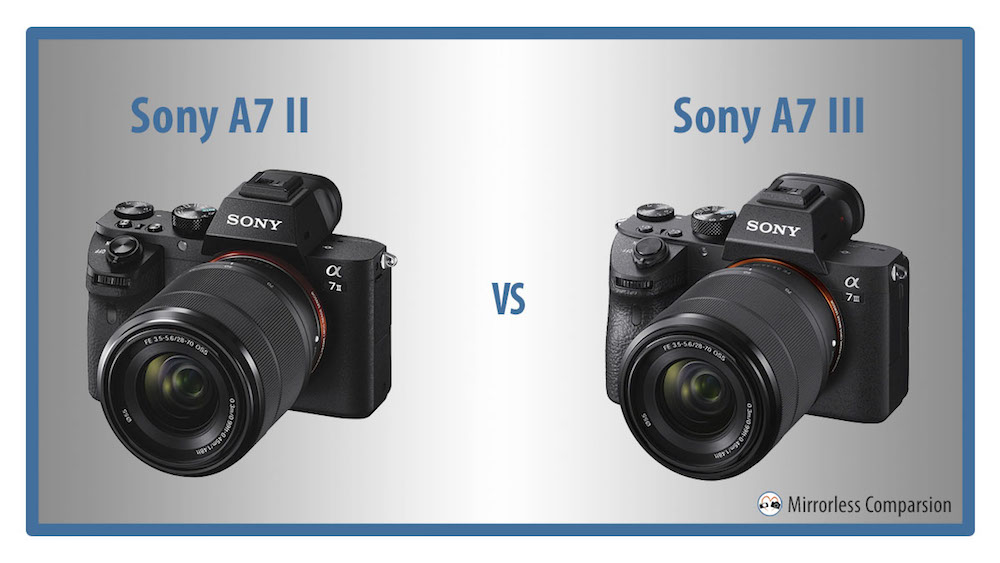 Sony took its time announcing the successor to the A7 II, a camera that despite having been released over five years ago, remains popular. In the meantime, with the A9 and A7r III the company showed us the kind of performance they are capable of, then distilled some of this technology into a more affordable package: the Sony A7 III.

By grabbing some of the most appealing features of the two flagship models, Sony has created one of its most well-balanced and complete offering to date – an attractive camera for amateurs and enthusiasts who don’t have the budget for the high-end products but wish to gain access to the world of full-frame photography. But how does it compare to its predecessor? Let’s find out now!

Ethics statement: The information supplied in this article is based on official specifications and our personal experience with the two Sony Alpha series cameras. We were not asked to write anything about these cameras, nor were we provided with any sort of compensation. Within the article, there are affiliate links. If you decided to buy something after clicking the link, we will receive a small commission. To know more about our ethics, you can visit our full disclosure page. Thank you!

If you want to find out the most important differences in less than a minute, check out the video below.

Are you reading from your mobile phone? Want to see a quick overview of what this article is about? Check out the R6 vs A7 III web story!

Although the resolution remains roughly the same (24.3MP vs. 24.2MP), the A7 III features a newly developed Exmor R CMOS sensor with BSI (Back-Illuminated) technology. The latter allows for more light collection and Sony claims 15 stops of dynamic range at low sensitivities, which is more than a 1-stop improvement over the A7 II if we measure it against the DXO rating of 13.6.

Furthermore, the new sensor of the A7 mark III has a front-end LSI chip that – just like on the A7R III – doubles the readout speed and increases the processing speed by approximately 1.8x in comparison to the A7 II, with the help of the updated BIONZ X image processor.

According to Sony, the updated image processor should improve colour reproduction of skin tones and nature/landscape images, amongst other things.

After using and testing the A7 III for several months now, we can confirm that it has one of the best full frame sensors on the market. We were surprised to see how well it compares to the more expensive A7R III when it comes to dynamic range and indeed, we noticed that the JPG files have a better colour palette, especially in Portrait model as the dominant yellow tint is gone.

Both cameras can record 14-bit RAW in uncompressed or compressed format.

Guide:
Low Light Settings for Sony A7 / A9

The A7 III gains a significant update to its autofocus, with some features taken from the flagship A9, which is the best mirrorless camera we’ve ever tested when it comes to AF tracking and performance. You can read more about this in our complete A7r III vs A9 comparison and birds in flight round-up.

While it may not have the same processing speed as the flagship, the A7 III share the same amount of AF points. More specifically, the new camera features 693 phase detection points that cover 93% of the sensor area, and 425 contrast detection points. The system includes Sony’s 4D Focus which tracks a subject while predicting its movements based on its speed and position in a three-dimensional space.

The A7 II by comparison has a less advanced AF system with 117 phase and 25 contrast detection points. The minimum sensitivity has also been improved from -1Ev to -3Ev.

According to Sony, the A7 III offers twice the focusing speed in low light and twice the tracking speed. Furthermore, you can take advantage of the AF Track Sensitivity setting to make the autofocus more or less responsive depending on the subject being photographed. In our tests, the A7 III did very well with birds in flight, football and various events, proving to be more precise and reliable that its predecessor.

Eye AF now works in AF-S, AF-C and with A-mount lenses, unlike the A7 II with which you could only use it in AF-S and with native E-mount lenses. Furthermore, the A7 III received various updates via firmware, including Eye AF for Animals which works really well.

You’ll also find that AF is available in Focus Magnifier mode on the new camera.

Guide:
Portrait and Eye AF Settings for Sony A7 / A9

The A7 III doesn’t inherit the same speed capabilities as the A9 but it does offer a significant update over the A7 II.

First, the mark III now has an electronic/silent shutter option. Second, the continuous shooting speed has been increased from 5fps to 10fps with AF/AE tracking. This speed is available with either the mechanical or electronic shutter but note that the RAW bit depth decreases to 12.

The buffer has improved as well, saving up to 177 JPGs, 89 compressed RAW or 40 uncompressed RAW files. By comparison, the A7 II can shoot at full speed for approximately 50 frames in JPG or 20 frames in RAW (compressed).

Up to 8fps, the A7 III gives you live view with blackouts while at 10fps, the last image taken is displayed instead. The latter is the same method used by the A7 II at 5fps so there is no live view.

Another improvement concerns the overall usability when shooting in continuous mode: unlike the A7 II, the mark III model allows you to operate the main menu, FN menu and other parameters while the images are being written to the memory card.

In scenes that present fluorescent and other types of artificial light, the A7 III can activate an Anti-Flicker option. It detects the frequency of the lights (between 100Hz and 120HZ only) and times the shutter to minimise colour anomalies or variations in exposure between frames. Note that the burst speed can decrease as a result and this function is not available with the e-shutter or in movie mode.

Guide:
Sony A7 / A9 Settings for Sports

Both cameras feature 5-axis sensor stabilisation. The A7 II was the first camera to feature this technology in the E-mount series and the A7 III brings a minor improvement to the performance.

By CIPA standards the new camera can compensate up to 5Ev when shooting hand-held while the A7 II tops out at 4.5Ev. In our real world tests however, this difference is rarely relevant, especially for stills: the slow shutter speeds I was able to use with the A7 II are more or less identical to those I can manage with the mark III version.

The video capabilities of the A7 II are average but nothing exciting by today’s standards. It can record in Full HD up to 50/60p and 50Mbps. Despite the implementation of dedicated picture profiles and S-Log2, the quality isn’t the best, in part due to visible aliasing.

The A7 III brings many improvements in comparison to its predecessor. It can record 4K video with no sensor crop in 24/25fps while performing full pixel readout, which means it captures 6K of information that is then downscaled to 4K for added sharpness and details. At 30p, there is a slight crop of 1.2x as the camera uses 5K of information instead.

Picture Profiles are available as well with a few additions including S-Log3 and HLG (Hybrid Log Gamma) which works with HDR compatible TVs.

Below: an official 4K video from the Sony Youtube channel

You’ll find extra things on the A7 III such as Zebra pattern, Gamma Display assist (for S-Log2/S-Log2) and proxy recording.

Both cameras feature a mic input and headphone output, record internally with 8-bit 4:2:0 and can output a 8-bit 4:2:2 signal via HDMI.

A significant improvement you will experience on the A7 III is the new battery (NP-FZ100). It is the same used for the flagships A7r III and A9 and is one of the best you can find for a mirrorless camera.

In fact, Sony claims that the new camera can record 710 shots (or 610 with the EVF) which is the highest of all mirrorless cameras by CIPA standards.

The A7 II uses the old NP-FW50 which has never been famous for its endurance (2.2x less capacity in comparison to the FZ100) and has a 350 shot rating.

Note that Sony continues its tradition of not including a battery charger with this particular series, so you’ll have to charge the cameras via USB or buy an optional charger.

Lots of users like the option of a touch screen on their camera, so you’ll probably be happy to hear that the A7 III now has one. You can use it to move the focus point, even when composing with the EVF.

The two monitors have the same size but the resolution is different and surprisingly, it is the new camera that has been downgraded from 1,288k dots to 922k.

The electronic viewfinder is the same OLED panel with 2.3M dots. However Sony has updated the optical design to proved a higher magnification of 0.78x over the 0.71x magnification used for the A7 II viewfinder.

Both cameras are dust and moisture resistant and have a magnesium alloy chassis. We can notice that the A7 III has a more robust mount that is attached with six screws rather than four.

The mark III model inherits all the little design and button upgrades seen on the A9 and A7r III. For example you’ll find an AF Joystick and additional AF On button on the rear, and the movie recording button has been moved near the EVF.

The A7 III has two SD card slots, with the first one offering UHS-II compatibility, whereas the A7 II only has one UHS-I slot.

Concerning connections, the A7 III has a faster USB 3 port (type C). Wireless capabilities include NFC and Wifi, but the new camera also gets Bluetooth to geotag your images.

Finally, the new camera inherits a more well-organised menu system that offers more customisation options, including the My Menu page where you can save up to 30 settings and 11 custom buttons (the A7 II has 10) with 81 assignable functions. You can also rate your images in playback mode, or edit the first 3 characters in the file name.

One advantage the older camera has is compatibility with PlayMemories Camera Apps, which means you can down many extra features such as time-lapse or Sky filter to your camera. (Unfortunately some of them aren’t free.) The A7 III lacks support for these apps just like the A9 and A7r III.

Guide:
Menu and Button Setup for Sony A7 / A9

Note that prices are as of early January 2021.

When there are attractive deals on the A7 mark II, they make the camera a tantalising proposition for those who want to enter to the world of full frame/35mm format without breaking the bank.

The A7 III on the other hand is everything we could have hoped for from the A7 II’s successor: it grabs features from the flagships A9 and A7r III, including the improved design, interface and 4K video, and has a much improved autofocus system. Granted, it is more expensive than the A7 II, but the price remains more than reasonable considering the features on offer. We’re not surprised that it has already become a best-seller.