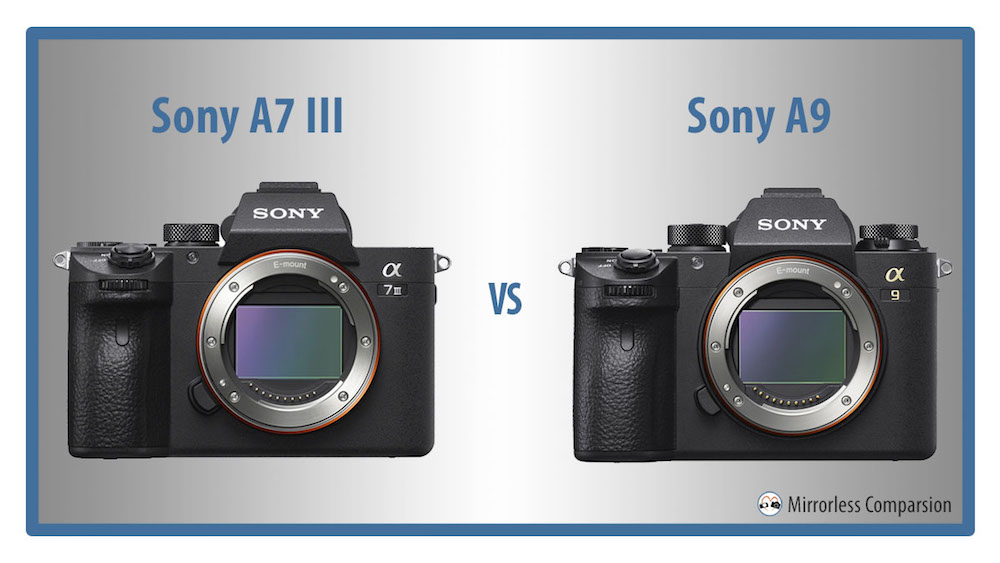 In the first half of 2017, Sony took everybody by surprise when it announced the A9, a flagship model with a 24MP full-frame sensor, outstanding autofocus, unprecedented burst capabilities and a hefty price tag to match. Sony’s decision to release this powerful camera was – at least in part – a way of demonstrating its prowess, not just within the mirrorless segment but the digital camera market as a whole. Those hoping for a mid-range A7 model with the latest features were forced sit tight, but now the wait is finally over.

The A7 mark III is the successor to the A7 mark II and incorporates some features from the flagships A7R III and A9. Curious to know how the A7 III and A9 compare? Then let’s begin!

Ethics statement: The information supplied in this article is based on the official specifications found on the Sony website and our experience with Sony mirrorless cameras. We were not asked to write anything about these cameras, nor were we provided with any sort of compensation. Within the article, there are affiliate links. If you decided to buy something after clicking the link, we will receive a small commission. To know more about our ethics, you can visit our full disclosure page. Thank you!

I’ll say it upfront: the following three points are the main reason you’d want to consider the A9 over the A7 III: its sensor technology allows the electronic shutter to perform like never before on a mirrorless camera, and that brings several improvements as we’re going to see in a moment.

First of all, both cameras feature a 24MP full frame sensor with back-sided illuminated technology, which allows the individual pixels to be closer to the sensor surface and gather more light than a traditional structure. The A7 III chip includes a front-end LSI that doubles the speed of the camera, but that is nothing compared to the A9.

The flagship E-Mount camera uses a stacked Exmor RS sensor which includes an integral memory that makes its sensor readout and processing speed ten times faster than the A7 III.

This results in faster burst speeds, shutter speeds and live view. It also minimises distortion and banding caused by the electronic shutter and we can confirm this after our experience with the A9. The A7 III displays more distortion when panning slowly or quickly.

The new camera doesn’t take advantage of the electronic shutter to the same extent as the A9, so its main purpose is for silent shooting. (Even the shutter speed stays at 1/8000s with the e-shutter, while on the A9, it goes up to 1/32000s.)

The stacked sensor of the A9 elevates the continuous shooting speed to 20fps with AE and AF Tracking. With the mechanical shutter, the performance is 5fps.

The A7 III can shoot up to 10fps with the mechanical shutter.

Another advantage of the A9 concerns the buffer memory: it can record up to 362 JPGs and 241 compressed RAW files in a burst. The A7 III defends itself well with 177 frames in JPG format and 89 in RAW, but we must not forget that the burst speed is slower which gives you a idea of how good the A9 really is.

The aspect I appreciated the most about the A9 was the possibility to record at 10fps or 20fps without any lag or blackouts in the EVF or on the LCD screen. Thanks to the powerful sensor and processor, the camera is capable of maintaining an uninterrupted live view feed while recording the images, and because it uses the electronic shutter (so no mechanical curtain involved), there aren’t any blackouts either.

You can notice the difference when shooting very fast action: there isn’t any lag or brief interruption when you start to record, and the live view displays as smoothly as when you are composing or half pressing the shutter button. You can read more information about this in our in-depth article here.

The A7 III can give you live view with blackouts up to 8fps, while at 10fps you see the last image taken.

According to Sony, the AF algorithm of the A9 has been optimised for the A7 III, and since they share the same number of phase detection points, it would be easy to assume that the new camera performs at the same level as the flagship model. However the A9 has a faster processing speed (the AF is calculated up to 60 times per second), so a difference – however small – remains. In our experience with the A7 III, we can confirm that the performance is really close which makes both cameras the best you can find in the mirrorless market as of now.

Once we get the whole electronic shutter topic out of the way, there is little left to talk about save a few subtle differences.

There is a rear 3.0″ tilting LCD screen with touch capabilities on both the A9 gets more resolution with 1,440k versus the 921k dots found on the A7 mk3.

The A9 has promising video capabilities but unfortunately Sony ditched the picture profiles designed for video, which was an odd decision as you can find them on most E-Mount and RX cameras. They are important because they give you better highlight preservation and more details in the shadows than the Creative Styles for stills, and they include profiles like S-Log2 and S-Log3.

Thankfully, the A7 III has the picture profiles including S-Logs and HLG (Hybrid Log Gamma) so you can take full advantage of the sensor capabilities.

As mentioned in the introduction, the two cameras are nearly identical when it comes to design and button layout but there is one exception: the drive dial of the A9 which also features an embedded focus mode lever. It is located on the top left side of the camera.

It is handy to use and features two unlock buttons to operate. It would be useful to have it on all A7 cameras quite frankly.

The A9 has a few extra connectors designed for professional use. The first is an Ethernet port that allows you to transfer images to an FTP server. The second is a flash sync port that can be used with studio strobes.

Although they use the same battery, the A7 III consumes less power than the A9, which hints that the stacked sensor on the latter as well as the EVF’s higher resolution do affect the battery life.

The new E-mount camera can record up to 710 images (or 610 when using the EVF) versus the 650/450 shots of the A9. However it’s worth remembering that these are CIPA ratings. In our experience with the A9, one single charged lasted way longer than that and in normal use it can easily last for more than a day.

Given the large difference in price between the two cameras, there is no doubt that many people will opt for the A7 III. After all, the camera gives you almost everything you could possibly need: a promising 24MP full-frame sensor, good ISO performance, 4K video, an advanced autofocus system, a large battery and lots of controls in a compact package.

The A9 has all this but really stands out thanks to two characteristics no other camera has: the live view feed with no blackouts and the fast burst speeds. Perhaps only avid sports and wildlife photographer can truly appreciate this but believe me, once you’ve tried it, it’s hard to go back!