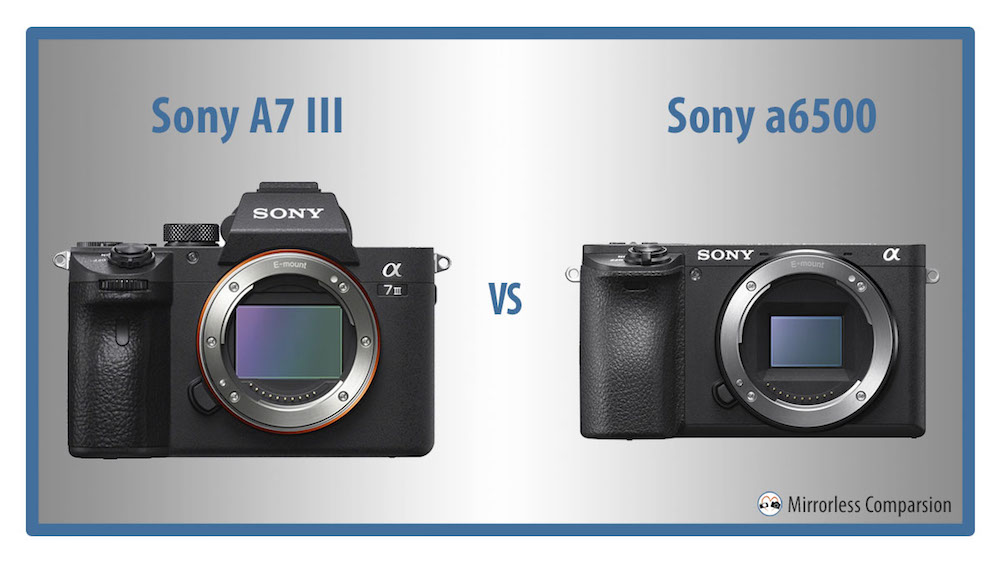 The full-frame Sony A7 III is the brand’s latest full-frame E-mount model and also the most well-rounded in the range thanks to its brand new 24MP sensor, impressive number autofocus points, 5-axis in-body stabilisation and 4K video with full pixel readout. In fact, some are already calling it the “Mini A9” for the photographer on a budget.

But what about the a6500, the flagship camera of Sony’s APS-C range? It too can be called an all-rounder, as it incorporates many similar specifications to the A7 III – albeit inside a flat-topped body – so it is only natural to wonder how the two compare.

In the following comparison preview, we’re going to be answering this very question by looking at the ten main differences between the new A7 III and a6500. Let’s get started!

Ethics statement:The information supplied in this article is based on the official specifications found on the Sony website and our personal experience with both cameras. If we get the chance to test the two cameras side-by-side for an extended period, we will publish a full comparison complete with sample images. We were not asked to write anything about these cameras, nor were we provided with any sort of compensation. Within the article, there are affiliate links. If you decided to buy something after clicking the link, we will receive a small commission. To know more about our ethics, you can visit our full disclosure page. Thank you!

As we mentioned in the introduction, the a6500 is immediately recognisable due to the flat-topped design it inherited from previous APS-C models. Unlike the A7 III whose electronic viewfinder is found inside a protruding hump at the centre, the a6500’s viewfinder is found on the left side of the body.

Although both cameras feature a prominent grip out front, that of the A7 III is a little larger. However they both feel somewhat small when used with heavy lenses such as the FE 100-400mm.

The viewfinder and larger grip contribute to the extra size and weight of the A7 III, with the official measurements being as follows:

Looking more closely at the body, it becomes clear that the A7 III has more physical controls and buttons than the a6500.

In addition to having two control dials instead of just one, it also comes with an AF-ON button and an AF joystick on the rear. A closer look at the mode dial on top also reveals that the Panorama shortcut has been replaced by the Slow & Quick mode.

A welcome addition to the A7 III is the dual SD card slot. One slot is standard UHS-I while the other is UHS-II compatible. The a6500 only has a single UHS-I compliant slot, making less capable of higher write speeds than the A7 III.

Found on both models is a 3.5mm microphone terminal but only the A7 III comes with a headphone output.

Both are dust and moisture resistant but lack freeze proofing.

Although both cameras have a 3-inch tilting LCD screen with the same 921k-dot resolution, the A7 III offers a little more flexibility in that it tilts up 107 degrees and down 41 degrees instead of 90 degrees and 45 degrees. Usefully, touch sensitivity has been given to both screens, although its only purpose is to change the AF point on-screen.

Approximately 24.2MP is the shared resolution of both the A7 III and a6500 but this is where the similarities begin and end.

The A7 III is equipped with a brand new BSI full-frame CMOS sensor which allow for better light collection than its predecessor. In fact, Sony claims 15 stops of dynamic range at low sensitivities.

This new sensor, combined with the latest BIONZ X image processor, gives the A7 III lots of flexibility in low light situations. It has a base range of 100 to 51200 ISO and can be expanded down to 50 or up to 204800. Note that the extended values only go up to 102400 for video.

Both sensors feature a front-end LSI chip that improves the processing speed capabilities.

The A7 III is the latest model to feature Sony’s fast hybrid AF system. It features an impressive 693 phase detection and 425 contrast detection points across 93% of the frame.

The a6500 uses fewer points (425 phase detection and 169 contrast detection). These numbers are still very impressive though, if you consider that in APS-C crop mode, the A7 III is limited to 299 points with FE lenses or 221 points with APS-C lenses.

The minimum focus sensitivity range starts from -3Ev on the A7 III while the a6500 has a minimum -1Ev sensitivity.

The A7 III also comes with the AF Area Recognition mode that allows frequently used focus point settings to be memorised and assigned to custom buttons for fast recall, as well as the AF Track Sensor that allows you to adjust the responsiveness in continuous mode. Both feature EyeAF and Face Detection.

We’ve tested the a6500 intensively and its autofocus system is definitely excellent. The A7 III is one of the best camera you can find and its AF is based on that of the flagship A9, which is the best we’ve tested so far in the mirrorless world.

A smaller yet potentially significant difference for sports and wildlife photographers is the buffer capacity of the two cameras.

The A7 III can record 177 frames in JPG format and 89 in RAW format in a single burst whereas the a6500 is capable of recording 233 JPGs or 107 RAW frames. Usefully, you can operate the Fn and menu buttons on the A7 III immediately after finishing a continuous burst, even while data writing is in progress.

Of course, we mustn’t forget that performance is also dependant on the SD card, lens and continuous shooting speed.

The A7 III and a6500 both use an electronically controlled, vertical-traverse focal plane type shutter that is supposed to produce fewer vibrations than previous shutters.

The main difference between them is their maximum shutter speed. Whereas the A7 III can reach 1/8000s, the a6500 is capped at 1/4000s. (Note that those speeds don’t change when you switch to the electronic shutter.)

Interestingly, the A7 III also comes with a new flicker reduction mode that minimises flickering in still images caused by fluorescent and other artificial lighting. It is useful at high shutter speeds and for continuous shots but does not work during silent shooting, bulb exposure, or movie recording. 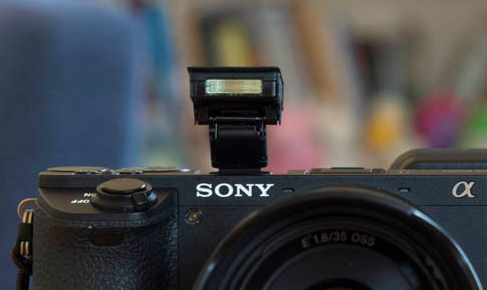 The A7 III doesn’t feature a built-in flash, which is anything but unusual given that other cameras in this series don’t have one either. An external flash unit or a trigger for remote units can be attached to the hotshoe on top.

There used to be one bugbear that pretty much all Sony owners had: the poor battery life of the original NP-FW50 battery.

This is why all third generation A7 cameras – including the A7 III – use the new NP-FZ100 battery. On one full charge, the A7 III can manage an average of 710 photos with the LCD monitor or 610 shots with the EVF, which is approximately 2.2x the capacity of the NP-FW50. 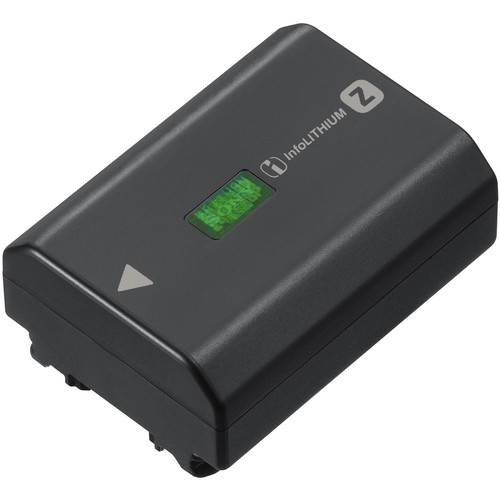 Unfortunately the a6500 uses the older battery and is listed as being able to take around 310 shots with the viewfinder or 350 shots with the LCD. In our experience, you can usually get through a day of moderate shooting on one charge as long as you avoid using power-hungry features such as 4K video or burst shooting. 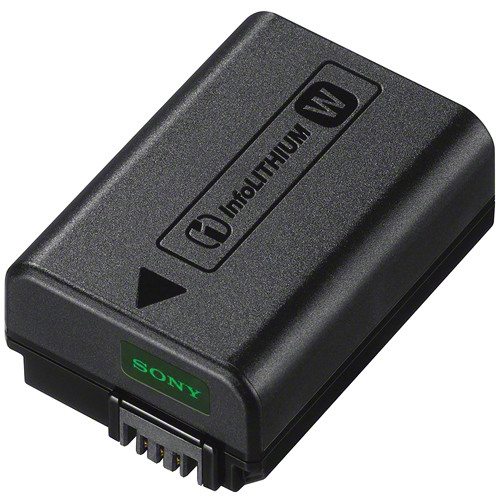 Usefully, both cameras can be charged via the USB port but neither comes bundled with a separate wall charger.

The battery life of the NP-FZ100 is excellent on its own, but those who require even more juice for long shooting sessions will certainly want to consider the VG-C3EM vertical battery grip for the A7 series.

It holds two additional NP-FZ100 batteries and benefits not only from weather-sealing and an extended grip for vertical shooting, but also a second shutter release button and an AF joystick identical to the one on the body. There is also a USB port to charge the grip via the camera body. 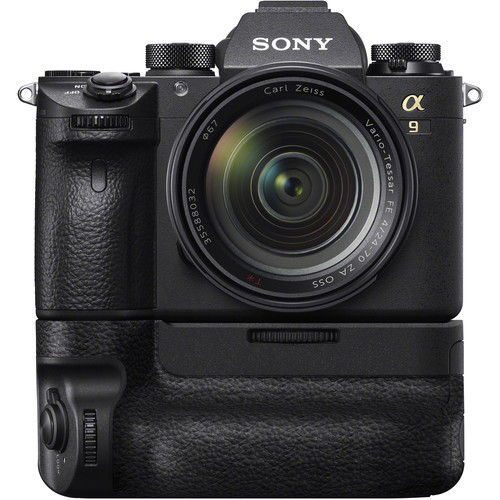 Unfortunately Sony didn’t develop an official vertical battery grip for the a6500 but there is the option of a third-party grip from Meike called the MK A6500pro. (Check out our a6500 accessory list to find out more!)

Although both cameras are capable of 4K recording up to 30fps and 100Mbps, and Full HD up to 120fps, there are a few small differences worth highlighting.

They both record in 4K with full pixel readout using the entire width of the sensor, which means they collect roughly 6K of data that is then sub-sampled to 4K to increase details and sharpness. However the A7 III applies a 1.2x crop when recording at 30fps, which means it collects slightly less data (5K).

You’ll find the picture profiles for video including S-Log2/3 but only the A7 III has HLG (Hybrid Log Gamma).

Finally, on the A7 III, you can record in both full frame and APS-C format.

A final point you might want to consider is the lens catalog for each camera.

Although both use the Sony E-mount, the A7 III is primarily intended for use with full-frame (FE) lenses whereas the a6500, being a smaller body, is physically a better match for the more compact range of APS-C (E) lenses.

At the moment, there are more high quality FE lenses than E lenses, not only from Sony itself but also Zeiss and affordable third-party brands such as Sigma and Tamron to name a few. (In fact, Sigma recently announced nine lenses for the FE system, two of which are brand new and seven of which are existing ART lenses.) For this reason, a full-frame Sony camera may turn out to be a better long-term investment than an APS-C camera like the a6500.

Finally, the phase detection AF points of the two cameras allow them to perform well with DSLR lenses via a compatible adapter, although once again the lightweight design of the a6500 isn’t ideal for this purpose.

In most ways that count, the performance of the Sony A7 III and a6500 is similar, owing mostly to their excellent hybrid AF systems and video capabilities. But given the price difference of around $600, some justification is needed for the additional cost of the full-frame camera.

The first is just that: the fact that it offers a larger sensor, and a brand new one at that. Indeed, it could easily become one of the best on the market if the specifications are any indication.

Second is the A9-inspired AF system and its additional phase detection points, which together provide great results for action-packed genres like sports and wildlife.

Finally there are the smaller details that make the shooting experience more enjoyable, from the larger battery and EVF to the AF joystick and the dual SD card slot.

That said, there is one aspect in the a6500’s favour that can’t be underestimated, and that is compactness, especially if your goal is to move from a heavy camera system to something lighter.

Check price of the Sony A7 III on