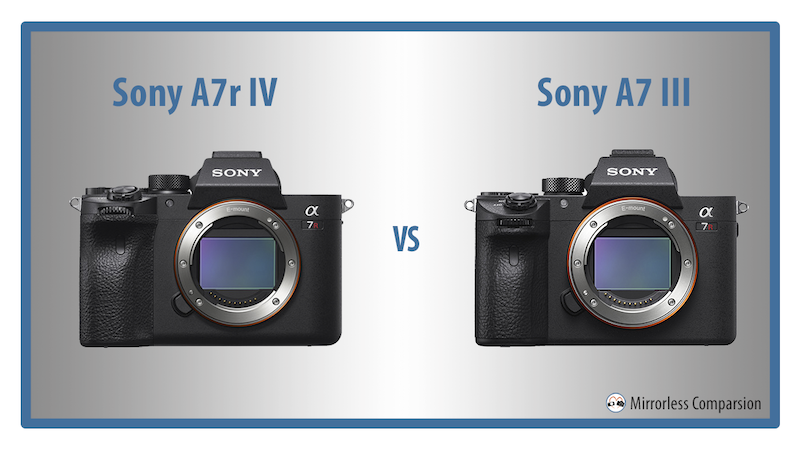 Over a year had elapsed since Sony last announced a full-frame Alpha series model, the incredibly popular A7 III. Last week, that all changed with the arrival of the fourth generation model in the high resolution A7R series, the A7R IV.

Despite the significant age gap, the A7R IV and A7 III are the two most recent full-frame models from Sony, so many users will naturally be wondering how their specifications compare – and more important, whether Sony has made a leap forward in terms of imaging technology. In this preview, we hope to provide you with all the answers!

The A7R series is well-known for its high resolution chips, and has always offered more resolution than the less expensive A7 series, so it should come as no surprise that this is where the first big difference can be found.

Accompanying the image sensors of both cameras is the BIONZ X image processing engine. On the new model, it has been further enhanced to faithfully reproduce details and colours while reducing noise significantly, especially in the standard ISO sensitivity range up to ISO 32000.

Unlike the A7 III, the A7R IV features a handy mode called Pixel Shift Multi Shooting. Relying on the camera’s image stabilisation, this feature precisely shifts the sensor in half-pixel increments four times, and again in one-pixel increments four times alternatively, to produce 240.8MP composites made up of 16 pixel-shifted images. Because of the time required to produce the composite, this mode is only effective when used on a tripod for static scenes such as still life or architecture.

This mode first made an appearance on the A7R III but all it did was sample information about the four colour channels at each pixel location rather than increase the resolution.

Note that these pixel shift images must be assembled in the Sony Imaging Edge desktop software.

Because the A7R IV has the latest version of the Bionz X processor, it has received real-time tracking, a feature previously seen on the A9 and the A6400. Essentially it allows you to pinpoint a subject in the frame and the camera will keep it in focus by analysing the body, face, eyes, patterns (brightness), colour and depth.

The A7 III probably won’t receive real-time tracking due to hardware (or perhaps marketing) limitations.

The A7 III offers 93% phase detection point coverage across the image area in full frame mode whereas thee A7R IV covers 99.7% of the height and 74% of the width.

With the release of firmware 3.0 in April 2019, the A7 III received an important update: enhanced ‘real-time’ Eye AF. This allowed Eye AF to be used in AF-C mode by either half-pressing the shutter button or pressing the AF-On button. (Before you had to assign it to a function button.) An equally important addition was the Eye AF mode designed specifically for animals. (You can read our detailed article about Eye AF for animals here.)

Both of these modes are available by default on the new A7R IV but Sony has pushed the boundaries one step further by offering Eye AF with C-AF in movie mode.

The sensor isn’t the only aspect of the A7R IV to receive a boost in resolution. The new UXGA OLED viewfinder now boasts 5,760K of resolution compared to just 2,359K on the A7 III. The size remains the same however at 0.5-inches, as does the magnification at 0.78x. The maximum refresh rate is higher on the A7R IV (100fps PAL or 120fps NTSC) than on the A7 III (about 60Hz).

Both cameras boast a 3-inch monitor that tilts up and down. However the resolution is slightly higher on the A7R IV at 1440k dots versus 921k dots on the A7 III. Both are touch sensitive, which means that you can easily change the AF point on the fly.

Although both cameras can shoot at a maximum speed of 10fps with continuous autofocus, the A7 III has a deeper buffer than the A7R IV due to the smaller size of its files. It can manage 163 Extra Fine JPG frames in a burst or 89 RAW frames, whereas the A7R IV is limited to 68 frames regardless of whether you shoot RAW or JPG.

Both cameras can record 4K up to 30p with full pixel readout in Super35 mode (APS-C). Because the A7R IV works with far more megapixels than the A7 III, we suspect it can deliver better sharpness.

In full frame mode, the A7R IV has to perform line skipping due to the high resolution whereas on the A7 III, you get full pixel readout once again.

The A7R IV has an updated hybrid autofocus system for video, touch tracking AF like the a6400, and as mentioned above, it introduces Eye AF for movie recording mode.

In response to feedback from photographers, Sony has improved the ergonomics of the A7R IV grip to make it more comfortable to hold for long periods of time. We haven’t had the opportunity to hold the new model as of yet, but it looks like an improvement over the third generation design that the A7 III employs. Note that a new battery grip (VG-C4EM) with an updated design was announced to accompany the A7R IV.

But that’s not all that’s been updated. The new model is ever so slightly larger and heavier and sealing against dust and moisture has been improved.

Sony has also made a few changes to the control layout. The multi-selector is larger and features a new surface texture that enhances the response, while the AF-ON button, which now has a new location, has been enlarged and features a clicking mechanism to make it more precise.

The exposure compensation dial has a lock/unlock button to prevent you from accidentally turning it, and the rear dial has been re-designed and re-positioned.

Finally, there is a new Multi Interface Shoe on the A7R IV that can now work with the digital signal of the new ECM-B1M Shotgun Microphone and XLR-K3M XLR Adaptor Kit. It is supposed to deliver better audio quality than your standard analog signal.

Tethering works via USB on both cameras but with the A7R IV it can now work wirelessly too. The new model supports 2.4 and 5GHz to remotely control or transfer photos while shooting.

The FTP functionality has been improved with support for background transferring. This means you can send files to a remote FTP server even as you continue to take pictures.

Using the mobile app, the A7R IV can transfer images to a smart device even when turned off.

Given the unceasing popularity of the A7 III model, we will be very curious to see whether the A7R IV attracts as many users as its predecessor did. Those who don’t care about high resolution might just end up waiting for the A7 IV, as it will surely have nearly all the other new features of the A7R IV including the updated construction, real-time tracking and Eye AF for movies.

That said, the A7R IV is very competitively priced for a full-frame camera with such a high resolution sensor, so if the megapixel count is what floats your boat, it could well be worth considering.

Check price of the Sony A7 III on: