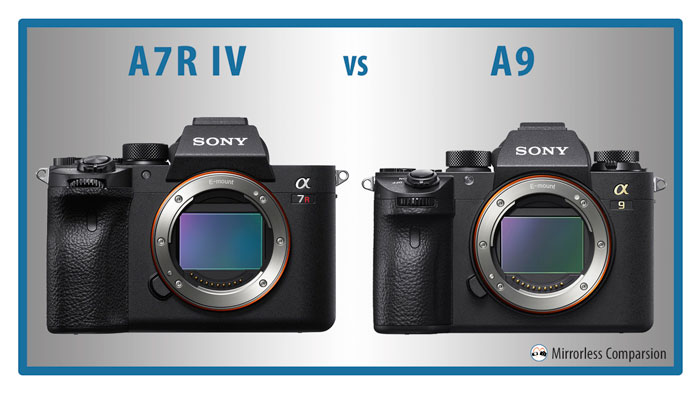 The 61MP sensor of the new A7r IV is a first for the A7 series, and for full-frame cameras in general. Despite the impressive number of pixels the camera has to deal with, it maintains excellent speed capabilities that are only too familiar to A7 users.

But if we have to talk about speed, we can’t ignore the A9. The flagship has set a benchmark that has not yet been challenged in the full frame segment.

These two cameras differ in many ways, but there are also other aspects that are quite similar. If you’re curious to know more, then keep on reading!

Ethics statement: This article is based on official specifications and our personal experience with the A9. We were not asked to write anything about these cameras, nor were we provided with any sort of compensation. Within the article, there are affiliate links. If you decided to buy something after clicking the link, we will receive a small commission. To know more about our ethics, you can visit our full disclosure page. Thank you!

The A7R IV and A9 feature a 35mm format sensor, but the technology behind these two chips is quite different.

The A7R IV introduces the highest resolution seen on a full frame camera with an impressive 61MP count. The sensor is back-illuminated and lacks the anti-aliasing filter to maximise details.

The A9 has 24MP but features a unique “stacked” sensor which includes an integral memory chip behind the back illuminated panel. The memory allows the camera to process more data simultaneously and makes the A9 the E-mount camera with the fastest processing speed.

Another point to make about the high resolution of the A7R IV is that you can use it in APS-C mode and still capture images with 26MP. The 1.5x crop can be useful for wildlife photographers but often the resolution is much lower (it’s 10MP on the A9 for example) so the A7R IV offers some extra versatility thanks to its resolution.

Thanks to the lower resolution, the A9 has a wider sensitivity range that starts from ISO 100 and goes up to ISO 51200. Extended values push the performance up to ISO 204800.

Both cameras can shoot in compressed or uncompressed RAW (14-bit).

The stacked sensor and processing speed allow the A9 to push the performance of the electronic shutter to levels never seen before. In fact, two years on there is still no other full frame cameras on the market capable of doing what the Sony flagship can do.

First the A9 burst speed can go as fast as 20fps with continuous AF and AE tracking. The A7R IV maximum speed is exactly half of that at 10fps (mechanical or electronic), which is still impressive given the higher megapixel count. As you can imagine, the buffer capabilities are far superior on the A9 for multiple reasons (processing speed and resolution mainly).

Second, and my favourite aspect, the A9 maintains a blackout-free live view while shooting at 10fps or 20fps with the electronic shutter. This specific aspect is unprecedented and has only been matched by the Fuji X-T3 (APS-C camera) so far.

The blackout-free live view is something you need to experience to really appreciate the difference. You start taking pictures and nothing happens in the LCD or EVF: the live view remains the same and if you don’t activate the fake shutter sound, you might not even notice you’re taking pictures.

Having a continuous live view without any sort of interruption is a blessing when following fast and erratic subjects such as birds in flight, but it can be useful in many other situations too.

Finally, the faster sensor readout of the A9 minimises distortion and banding that are common with other cameras when the electronic shutter is activated (rolling shutter).

Guide:
Wildlife and Birds with Sony A7 / A9

The mark IV model inherits the latest technology called real time tracking where the camera can analyse various types of data to follow the subject more precisely. It also works with face and eye detection. The same algorithm and AI technology has been introduced to the A9 via firmware update.

The advantage of the A9 is once again the processing speed. The camera can work at 60 times per second to calculate autofocus. It is currently the only Sony camera capable of such speed.

In addition to Eye AF for humans, the A7R IV can track the eyes of animals too. We tested this function on other Sony cameras such as the a6400 and A7 III and we were impressed by the performance. We’re sure that the mark IV will do well and the A9 will soon get the same feature via firmware.

Guide:
Portrait and Eye AF Settings for Sony A7 / A9

The two cameras feature 5-axis image stabilisation: the sensor shift mechanism corrects Yaw, Pitch, Roll, X and Y. It can be enabled for stills and video. It works with any lens that has electronic contacts and can transmit exif data.

Without electronic contacts, 3 axes can still be used. If you attach a lens with optical stabilisation, the camera combines the OS with 3 axes on the sensor.

The shutter unit has been re-designed on the A7R IV to suppress any subtle camera shake, while an updated stabilisation algorithm allows the camera to maintain the same rating of 5.5Ev (CIPA).

The A9 capabilities are sligthly lower than the A7R IV (5 stops of compensation) so on paper it should perform slightly worse. However this remains to be seen in real world use. In my experience so far, I found most A7 cameras to perform at the same level when it comes hand-held work.

The Pixel Shift Multi Shooting mode was first introduced on the A7R mark III, and has been updated with new capabilities on the mark IV model.

The mechanism used is the same for the image stabilisation. The sensor moves by half a pixel or one pixel while the camera takes a series of continuous frames. With the Sony Imagine Edge software, you can then combine those shots to create a final image with more colour resolution, and in the case of the A7R IV, more megapixels too (a whopping 240MP).

The camera takes time to capture all the frames so this mode must be used on a tripod with no moving elements inside the composition for optimal results.

Despite having the same technology, the A9 doesn’t have the pixel shift mode, nor do any of the other Sony models.

Because of the high megapixel count, the A7R IV does line skipping when recording in full frame mode. With the Super35 mode, it performs full pixel readout so the best quality comes with the 1.5x crop, which means less aliasing and less noise at high ISOs.

The A9 can do full pixel readout in full frame mode, so the quality is already at its best when using the entire width of the sensor. Note that when recording in 30p, the camera crops about 1.2x. A Super35 mode is available as well.

Another big difference is that only the A7R IV has the Picture Profiles, which are designed for video and feature lots of advanced settings including profiles such as S-Log2, S-Log3 and HLG. On the A9, you can only use the Creative Styles which are designed for stills (JPGs) and have less dynamic range (highlights in particular can be clipped much more easily).

They both us a fast hybrid autofocus system with touch tracking capabilities. The A7R IV has one extra possibility: enabling Eye AF for video for the first time ever on a Sony camera.

With the A7R IV, Sony introduces the third major change in the body design. The company has been listening to feedback received from its users and has added interesting changes without sacrificing the compact design that defines the A7/A9 series.

Regarding dimensions and weight, the A7R IV is larger and heavier by a small amount. They are both weather sealed (dust and moisture).

The first improvement is the grip, something we had criticised many times and Sony seems more determined to address this now. The grip on the new camera looks taller, more pronounced and the distance from the lens mount has increased as well.

Of course I have yet to try it to see how much of an improvement it brings, but hopefully it’s a good one. Nikon has already proven that you can have camera with similar dimensions without sacrificing the grip (Z6 and Z7) so I’m sure Sony can do it as well.

There are changes to the button layout too. For example the AF Joystick and the AF-ON button are larger, the exposure compensation dial has a lock/unlock button and the rear dial has been relocated and made taller for easier access.

The A9 retains one exclusive control: the drive and focus modes dials on the top left.

Both cameras feature two SD card slots. They are both UHS-II compliant on the mark IV model, whereas only one is on the A9.

The A7R IV is the first Sony camera to sport an electronic viewfinder with a 5.76 million dot OLED panel. The A9 EVF uses an excellent 3.6M dot OLED screen, which I find really good but I can’t wait to see how much better the one on the new camera is going to be.

Apart from the difference in resolution, the two viewfinders share all the other specs including a magnification of 0.78x, a refresh rate of 120fps (100fps in PAL) and a 23mm eyepoint.

The two cameras have a lot of things in common when it comes too connectivity. They both feature:

They both have wireless capabilities but the A7R IV can work at 5Ghz whereas the A9 has a 2.4GHz band. Only the A9 has a LAN terminal to connect an ethernet cable.

Tethering is available with Imaging Edge and Capture One, and the A7R IV can work wirelessly. The mark IV model has an additional USB C port which provides more speed for wired transfers.

The two products can connect to a FTP server and transfer images in the background. With the mobile app, the mark IV can transfer images to a smartphone even when turned off.

Finally, the A7R IV has an updated Multi Interface Shoe that can work with a digital signal. You’ll need a compatible digital microphone such as the new ECM-B1M or the updated XLR-K3M XLR Adaptor Kit.

The A9 can now be found for less than its original price of $4500 and depending on the offers available, can cost as little as the R model.

The A7R IV and the A9 target two different types of photographers.

The former boasts impressive capabilities for landscapes and studio work, but has enough speed and an advanced enough autofocus to work well in other situations. It’s more versatile than the resolution suggests.

Of course if speed is a priority for the work you do, then I can’t recommend the A9 highly enough given its impressive processing speeds and electronic shutter capabilities.

In a way the A7r IV and A9 complement each other very well, so I could almost envision some photographers using both.

Check price of the Sony A9 on