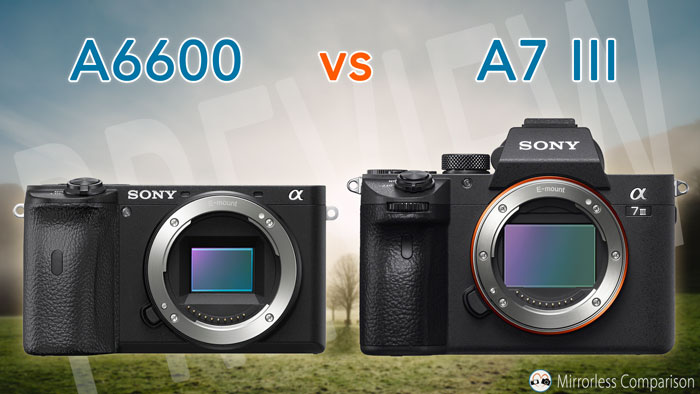 The A6600 is the most advanced APS-C camera in the E-mount series, and although it doesn’t necessarily have all the characteristics of a true flagship, it certainly deserves the title of “high-end model” in the line-up.

The A7 III is not at the top of the class in the A7 series, but it is by far the most popular. If you’re torn between a full frame or APS-C body, you’ll likely come across these two products. Here is how they compare!

Ethics statement:The information supplied in this article is based on the official press release for the A6600 and our direct experience with Sony cameras. We were not asked to write anything about these cameras, nor were we provided with any sort of compensation. Within the article, there are affiliate links. If you decided to buy something after clicking the link, we will receive a small commission. To know more about our ethics, you can visit our full disclosure page. Thank you!

Although both cameras give you an output of 24MP (6000×4000), the sensor found inside their bodies is different.

The A7 III sensor has a BSI structure (back-illuminated) whereas the A6600 chip features a copper wiring layer to improve transmission. Both have a front-end LSI chip to increase the processing speed.

RAW output is 14-bit on both cameras but only the A7 III allows you to choose between compressed and uncompressed.

The A7 III features a vast array of focus areas: 693 phase detection and 425 contrast detection points that cover 93% of the frame. Although not as fast as the flagship A9, the A7 III has proven to be an excellent performer in our tests which include sports, birds in flight and low-light events. The tracking capabilities are also very good, even in challenging light conditions.

The a6600 has 425 phase and contrast detection points that cover 84% of the sensor’s surface. More important, the camera features real time tracking which is Sony’s latest autofocus marvel. It works by analysing colours, patterns, faces, eyes and depth when tracking the subject. AI and machine learning technology is added to the mix to make the performance faster and more accurate. We tested this on the A6400 and it’s safe to say it is the best tracking system we’ve experienced to date. It works for stills and video.

The A7 III has a bit of an advantage in low light because the minimum sensitivity is -3Ev versus -2Ev on the A6500 (both with an f2 aperture).

Both cameras feature Face Detection and Eye AF. The latter works in real-time and is available for humans and animals (you need firmware 3.0 on the A7 III). It works really well and is very handy when photographing all sorts of animals, although I couldn’t make it work for birds.

One thing that only the A6600 has is Eye AF for video. The A7 III can only use face detection when working in movie mode.

The A6600 has a slightly faster maximum burst speed of 11fps, whereas the A7 III stops at 10fps. At 8fps, they both display a live view with blackouts. With the electronic shutter, the APS-C model goes up to 8fps whereas the A7 can use its full speed.

Both models include a first electronic curtain and a full electronic (silent) mode.

The A7 III also has an anti-flicker mode that reduces flickering when shooting still images, which can be caused by fluorescent lights.

The A6600 and A7 III share most of the same video specifications including 4K video recording with full pixel readout, S-Log2, S-Log3, HLPG profiles and much more.

But one thing the A6600 does that the A7 III does not is lift the limitation of 30 minutes per clip usually found on this kind of product. It is the second Sony camera after the A6400 to do so.

The most noticeable difference when it comes to design is the viewfinder. The one on the A6600 sits inside the body on the left side (rear view), whereas the one on the full frame camera protrudes from the top.

Sony has updated the design of the front grip on the APS-C camera so that it looks similar in size to the one of the A7 III.

The A7 III is the largest of the two, albeit not by much, and is also heavier:

The A7 III has more physical controls like the AF Joystick on the rear, the exposure compensation dial on top and the extra dial on the front which makes exposure control somewhat easier than on the A6600.

The two products have a built-in electronic viewfinder with 2,359k dots of resolution (OLED panel).

On the rear, you’ll find a touch LCD screen on both cameras. The touch capabilities are mainly related to the focus area, with the possibility of activating tracking on the A6600.

The APS-C camera has an advantage with regards to the tilting mechanism: it rotates up 180˚ and down 74˚, whereas the A7 III monitor tilts 90˚ and 45˚ respectively.

The A6600 has one SD card slot, which can be accessed from the battery compartment at the bottom. Despite being released in late 2019, it is still not compatible with the faster UHS-II standard.

The A7 III on the other hand not only has a dedicated memory card compartment, but also offers two slots with the first being UHS-II compliant.

Concerning the physical connections, both have a mic input, headphone output, micro HDMI output and a micro USB 2.0 port. The A7 III has an additional USB C port.

The A6600 uses the same battery pack as the A7 III, the NP-FZ100, which has a larger capacity than the previous battery. There is a difference however in the battery life rating.

The A6600 can record about 800 frames (720 shots when using the viewfinder only, or 810 shots with the rear monitor). The A7 III can do 610/710 frames which means it is a bit more power-hungry. Keep in mind that these figures don’t reflect real world conditions. I’ve managed to capture more than 1,500 shots with my A7 III in a day with just one battery.

Both cameras can be charged via USB port and come with a separate wall charger in the box.

If you want to extend the battery life further, you can use the official VG-C3EM vertical battery grip for the A7 series. There isn’t one for the A6600 at the moment but it might come via third party brands in the near future.

Now while the possibility of having interchangeable lenses from different formats is a welcome option, it is worth dedicating a few paragraphs to the APS-C and 35mm lens selection.

Sony has developed an impressive array of full frame lenses over the past five years, and A7 owners can also count on products from Zeiss, Samyang, Sigma and Tamron. All these lenses will work flawlessly on the A6600 but some of them might be a bit too large (or expensive) for such a camera.

If you want to keep your set up as small and compact as possible, then you can turn to the APS-C range but it is not as well furnished as the full frame range.

Sony recently announced a 16-55mm f/2.8 zoom, which is the first 2.8 zoom in the series for APS-C, and you can find fast 1.8 and 1.4 primes (thanks to Sigma in particular). There is an overwhelming number of slow telephoto zooms however, including the recently announced 70-350mm.

These prices are for the body only. Special offers and instant rebates might reduce the price for a limited time in certain countries (especially for the A7 III which is an older model).

For some, the difference in sensor size will be the sole determining factor in making the decision between the two. For others, the disparity in price will be enough.

The popularity of the A7 III has reached levels never before seen in the mirrorless world, and it is entirely justified. The quality you get at this price is hard to beat at the moment. If you’re looking for a great full frame camera, this is one of the very best.

The A6600 is no less interesting in my opinion. It brings interesting improvements to the APS-C series (battery life to name one), offers outstanding autofocus performance, and remains compact and light despite its larger grip.

Perhaps it lacks a few extra specifications that would make it more appealing, such as a significantly faster burst shooting speed or updated video specifications. But if you want a more compact body and to spend less, it’s hard to go wrong with the A6600.