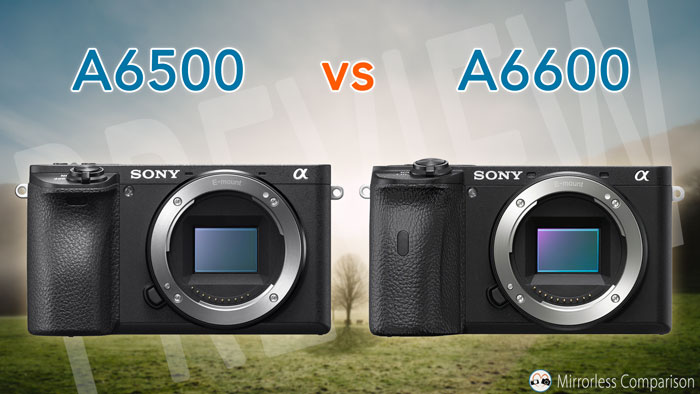 The A6500 was announced in October 2016 and was the first APS-C camera in the E-mount range to feature 5-axis stabilisation. That, coupled with its impressive buffer capabilities, was enough to promote it to flagship status within Sony’s APS-C range.

Almost three years later we meet the A6600, the A6500’s natural successor. It retains most of the characteristics of its predecessor but brings the latest software tweaks in addition to real life shooting improvements such as the grip and battery life.

Let’s see how they compare, but first a quick summary of the many characteristics they share:

Ethics statement: The following is based on our personal experience with the a6500 and official information released by Sony. We were not asked to write anything about these products, nor were we provided with any sort of compensation. Within the article, there are affiliate links. If you buy something after clicking the link, we will receive a small commission. To know more about our ethics, you can visit our full disclosure page. Thank you!

The A6600 is identical to the A6500 in terms of dimensions, but there is one major difference: the grip is substantially larger on the new camera. This means that the handling should improve when using large lenses.

The A6500 grip is a good compromise given the small size of the camera, but I’m curious to see how much of an improvement the new design on the A6600 will bring.

It would be reasonable to think that the only reason Sony made the grip larger was to improve the ergonomics, but there is actually another reason the brand changed the design: to house a larger battery!

The A6600 uses the same NP-FZ100 battery as the full frame A9 and third generation A7 cameras. This gives the E-mount APS-C series a better battery life than ever before. Sony has given the A6600 a rating of 800 shots per charge, which means of course that in real life you can get even better results.

The A6500 uses the older NP-FW50 which has a much smaller capacity per charge. The official rating is 310/350 shots and in our experience, it drops pretty quickly when recording 4K video or shooting in continuous mode.

Both cameras feature a rear LCD screen than can be tilted up and down, but the one on the A6500 doesn’t go further than 90˚ up or 45˚ down.

The monitor on the A6600 on the other hand can tilt up 180˚, which is useful for selfies or vlogging, and down approximately 74˚.

The A6500 uses a hybrid system which includes 425 phase and 169 contrast detection points. It features Sony’s 4D Focus technology and in our tests it proved fast and reliable, even for sports and challenging subjects such as birds in flight.

The A6600 has the same number of phase detection points but the contrast areas have also been increased to 425. Furthermore, the new camera includes the latest software algorithm that Sony has been developing over the past few years.

This includes for example real time tracking with AI where the camera analyses the subject on multiple levels (colours, brightness, depth, face) to increase precision and accuracy. We’ve tested this on the A6400 and it is indeed one of the most impressive tracking AF systems we’ve seen on a mirrorless camera.

Focus acquisition is also faster according to Sony, with the A6600 locking in 0.02s versus 0.05s on the A6500. The minimum sensitivity if -2Ev for the new camera and -1Ev for the older model (f2 aperture).

The star of Sony’s autofocus system is the eye detection mode. On the A6500 you can enable it in single or continuous autofocus. It works well and I find it reliable in most situations.

Once again the A6600 has received the latest software updates. This means that Eye AF works in real time when half pressing the shutter button, or using the back focus button. You don’t have to assign the function to a custom button like on the A6500.

Another relevant difference is that the A6600 can use Eye AF for animals. We tested this on the A6400 and it works surprisingly well, with a similar speed and accuracy to eye AF for humans.

Finally, the A6600 is Sony’s first APS-C camera to include Eye AF for video recording.

Although the sensor is the same, the updated BionZ X image engine allows the A6600 to have a slightly larger ISO range.

Here is something curious. In the press release, Sony states that the processing speed of the A6600 is 1.8x faster than the A6500 thanks to the new image processor and the front-end LSI chip (which to be fair the A6500 also has).

The A6600 does 115 frames with JPGs or 46 frames with RAW, which is less than half of what the other camera is capable of.

In early 2019, Sony surprised everybody by ditching the 30 minute recording limit per clip on the a6400. It’s not something that Sony has explicitly promoted, but when we tested the camera later on we were able to confirm the unlimited recording capabilities as many other reviewers and users did.

Again, Sony has not promoted this feature but according to initial feedback, the A6600 has the same capacity to record for an unlimited time (or until the card or battery runs out if you prefer!).

For video, the two cameras share the same settings except that the A6600 also includes the HDR profiles (HLG, HLG1, HLG2 and HLG3).

The latter can be used with compatible HDR TVs or if you work with other cameras in an HDR workflow. These profiles can also be used on their own and colour graded in post.

Both cameras have a microphone input (3.5mm jack) but the A6600 also gains a headphone output (3.5mm too) so that you can monitor audio more precisely with your headphones. It is the first APS-C E-mount camera to feature audio in and out connectors.

The a6500 features a built-in flash, although the guide number is rather low (6GN at ISO 100) as is often the case on this kind of product.

On the A6600, Sony has ditched the built-in flash so you’ll have to rely on Sony’s own speed light offerings or third party products.

Although many characteristics are similar, if not equal, the A6600 feels like a more complete product, or should I say a more mature camera.

The better battery life, larger grip, 180˚ tilting screen, headphone port and unlimited recording in video mode are all details that can make a big difference when shooting.

The improved autofocus system may not be a revolution but we’ve reached a point where Sony cameras have become so reliable that you can afford to keep a large area mode and trust tracking and Eye AF to focus correctly in all sorts of situations.

Of course the A6500 remains a very good performer. It delivers the same image quality, has very good autofocus and the video quality is excellent. Perhaps it will become more interesting once the price drops even further.