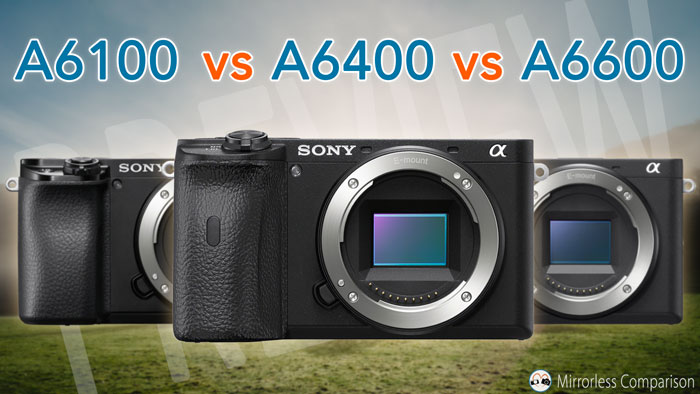 Now “replace” might not be the exact term we’re looking for. Knowing Sony, they will likely keep the older models on the market so as to capture some extra sales by knocking the prices down.

This means that there are currently six Sony APS-C cameras on the market to choose between, and they all greatly resemble one another – not to mention that the naming is quite confusing to say the least!

So, to help clear up the mess, let’s start by analysing the three most recent cameras, all announced in 2019, that feature the most recent technology on offer from the brand.

We have the A6100, which we can comfortably label the entry-level model. The A6400 is the mid-range model and the A6600 is the flagship/more advanced model of the three. Let’s see how they compare!

Ethics statement: The following is based on our personal experience with the a6400 and official information found on the Sony website. We were not asked to write anything about these products, nor were we provided with any sort of compensation. Within the article, there are affiliate links. If you buy something after clicking the link, we will receive a small commission. To know more about our ethics, you can visit our full disclosure page. Thank you!

I usually make a quick bullet list of the things cameras have in common, but this time, I thought I would say a bit more to help those who aren’t familiar with Sony cameras.

The first thing I want to mention is that the three models share the same hybrid autofocus system with 425 phase and 425 contrast detection points distributed across 84% of the sensor’s surface. They have a very fast focus acquisition time of 0.02s and an advanced software algorithm that includes AI and machine learning technology.

In other words, they have one of the most reliable autofocus systems of all mirrorless systems and I can attest to this since we’ve already tested the A6400. The tracking capabilities are impressive for both stills and video, and they have the most advanced eye detection technology which works with humans and animals (you can read more about this in our dedicated article).

Then we have the sensor. They all feature an Exmor CMOS chip with 24.2MP, an anti-aliasing filter and a front-end LSI component to increase the processing power. The image quality should be on par with the A6400 that we tested and found to be very good indeed.

Another important point: they all record 4K video up to 30fps and 100Mbps. You get full pixel readout and no pixel binning, and up to 25p, the entire width of the sensor is used which means the field of view is not altered (there is a 1.2x crop at 30p). In Full HD, they go up to 120fps. There are some differences when it comes to video settings which we will discuss further down.

Here is a complete list of all the things these three cameras have in common:

Now, let’s get on with the differences!

It is safe to say that Sony hasn’t changed much about the design of the two new cameras. In fact the entire a6000 series looks very similar but as always, there are a few differences worth pointing out.

The most important is the front grip, which is significantly more prominent on the A6600 (about 1cm larger). This is to improve handling and accommodate the larger battery. It has also been made more rigid.

The other big difference is that only the A6100 lacks a magnesium alloy body and weather sealing, whereas the other two are protected against dust and moisture.

Concerning the button layout, the A6600 has two custom buttons on top, whereas the other two models have one which is located closer to the shutter release button.

The flagship has 11 custom buttons whereas the other two models have 8 function buttons.

The three cameras share the latest version of Sony’s menu system which includes the My Menu page where up to 30 items can be saved.

Finally, the A6400 and A6600 have a highly durable shutter that has been designed to withstand approximately 200,000 shutter cycles.

The three cameras feature a built-in viewfinder with a 0.39-inch OLED panel, an optical design with 0.70x magnification and a 23mm eye-point.

3. Image stabilisation: only the A6600 has IBIS

The a6600 becomes the second APS-C camera from Sony to feature 5-axis stabilisation on the sensor, with a compensation rating of 5 stops (CIPA standard).

The system can work with any lens, including adapted vintage lenses (3 axes are used if the lens doesn’t have electronic contacts). The camera can also combine 3 axes on the sensor with optical stabilisation.

My experience with the 5-axis stabilisation of the A6500 hasn’t been totally positive, especially in video mode due to lots of jittering and a lack of smoothness. I’m curious to see if Sony has improved the performance on the new camera.

The A6100 and A6400 don’t have IBIS so they must rely on lenses with OSS, or third-party gimbals and supports.

As explained in the introduction, the three cameras use the same 24.2MP APS-C sensor.

Another small difference found on the A6400 and A6600 is a function called Shutter AWB Lock: it allows you to lock and unlock the white balance.

The three cameras can record 4K video but the A6100 lacks the Picture Profiles, Sony’s dedicated picture settings for movie recording that include important profiles such as S-Log2, S-Log3 and HLG (HDR).

The Picture Profiles give you more dynamic range by default (less highlight clipping) than the Creative Styles which are designed for JPG stills.

Another difference worth to point out is that the A6400 and the A6600 don’t have the usual 30 minute recording limit per clip. I couldn’t find any information concerning the A6100, but given that it is less video oriented than the other two models, I wouldn’t be surprised if it has the limitation.

Sony’s Eye AF is known as the most reliable eye detection system of all mirrorless brands. They recently introduced the same technology for video recording, first on the A7R IV, then on the RX100 VII. Now it is the A6600’s turn to receive the same update.

As you can imagine, the A6100 and A6400 don’t have Eye AF for video but they can still rely on face detection and the excellent tracking mode.

The three cameras share the same maximum continuous shooting speed of 11fps, or 8fps with live view, but there is a difference when it comes to buffer capabilities.

The three cameras feature a 3.5mm input which allows you to connect an external microphone.

The A6600 has a 3.5mm output as well, which is useful to connect headphones and monitor the audio recording more precisely.

Note that optional accessories such as the XLR adapter can be used on the three cameras via Sony’s special hot-shoe.

One of the most important differences between these three cameras regards the battery.

The three cameras can be charged via USB but note that none come with a separate battery charger.

Sony doesn’t produce an official battery grip for the APS-C line-up, but you can find third-party solutions such as the Meike battery grip (find out more about it in our accessory article).

The A6100, A6400 and A6600 have many things in common and I am sure that when it comes to image quality and autofocus, they deliver the same level of performance.

The A6100 is the most affordable model and a few things have been sacrificed as a result: less resolution for the viewfinder and the lack of Picture Profiles/S-Log curves for video make it a more beginner-oriented solution.

With a more flexible budget, you can get the A6400 which gives you more EVF resolution, a better buffer and more settings for video.

The A6600 distinguishes itself from the group with its larger grip, bigger battery and 5-axis stabilisation. It is certainly the most attractive offering of the three, but it comes at a cost.