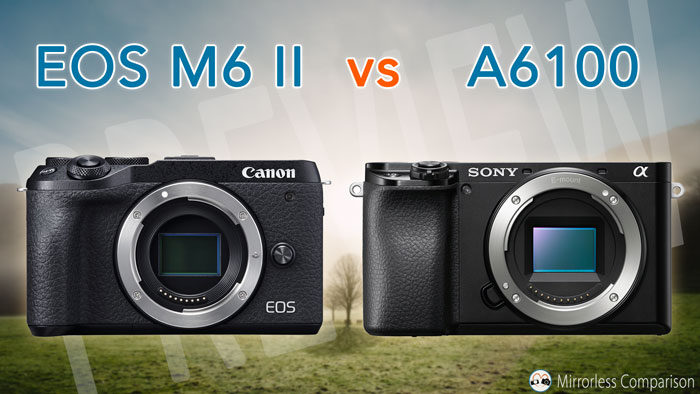 The Canon EOS M6 II and Sony a6100 were released on the same date in 2019. Both target an enthusiast audience with their APS-C sized sensors, phase detection AF systems, 4K video capabilities, and fast burst speeds.

Despite having a number of characteristics in common, there is also an equal number of ways in which these two models differ. Let’s take a look at them now!

The two cameras are fairly similar in length and depth but the M6 II is a little taller while the a6100 is lighter. Both have a fairly substantial grip out front.

Although both sport a 3-inch touch sensitive LCD monitor that tilts up 180 degrees, that of the Sony can tilt down a bit further (74 vs 45 degrees). That said, it offers slightly less resolution (921k vs 1040k dots).

The two cameras have a fairly similar array of controls and features including a control wheel on the rear, a number of customisable function buttons, a pop-up flash, a dedicated movie record button, a control dial on top, a hot shoe for accessories and a mode dial. However only the Canon has an AF/MF switch on the rear.

Neither camera has any sort of weather sealing.

One significant advantage the a6100 has over the Canon model is the built-in electronic viewfinder located on the left-hand side of the camera. Being a 0.39 inch type, it isn’t as big as other EVFs on the market but it has a decent magnification of 0.7x, a resolution of 1440k dots, 100% field coverage and a 23mm eye-point.

The M6 II has a hot shoe to which you can attach an external EVF such as the EVF-DC2 but this will set you back an extra $200 US. It does have more resolution however (2,359k dots).

Both cameras house an APS-C sized sensor but the Canon’s is slightly smaller and has more resolution (32.5MP vs 24.2MP). The A6100’s sensor benefits from a front-end LSI chip that increases the processing capabilities.

Each camera sports its respective brand’s hybrid autofocus system and in our experience, both work extremely well for moving subjects.

The Canon uses Dual Pixel CMOS AF with a maximum of 143 or 99 points, up to 5481 AF positions and up to 88 x 100% coverage depending on the lens used. It boasts an excellent AF working range of EV -5 to 18 (with an f/1.4 lens) and benefits from Face and Eye detection in all modes, no matter which settings you select.

The A6100 has 425 phase and contrast detection points that cover 84% of the sensor’s surface. It benefits from Real Time Tracking, where the camera uses AI and machine learning technology to analyse the subject, as well as Real Time Eye AF which is effective for both humans and animals. It has an excellent focus acquisition time of just 0.02s and an AF working range of EV -2 to 20 with an f/2 lens.

Overall there aren’t many differences in the video department. Both can shoot in 4K resolution up to 25fps without cropping the frame. The A6100 applies a slight 1.2x crop at 30fps.

Both cameras allow you to use phase detection autofocus while recording, which means that the AF is fast and reliable even with moving subjects.

The Sony offers full pixel readout and downscales from the equivalent of 6K resolution to obtain the information needed for 4K. It also has a high bit rate of 100Mbps. Sadly it lacks the picture profiles and S-Log shooting found on other Sony cameras.

Both cameras offer Full HD up to 120fps but unlike the Sony camera, this produces a crop on the Canon and causes the footage to lose both sound and autofocus. On the A6100, you can either choose to record at 120fps in normal mode or use the S&Q mode where the footage is conformed in camera to produce a slow motion result.

The EOS M6 II is the faster camera, offering 14fps continuous shooting with continuous autofocus for up to 54 frames in JPEG, 23 frames in RAW or 36 frames in C-RAW. It also come with a new RAW Burst mode at 30fps, along with a Pre-Burst mode that captures images before you fully depress the shutter button. Both work with C-AF enabled.

The a6100 isn’t quite as fast, managing speeds up to 11fps with continuous AF for up to 76 frames in JPEG or 33 frames in RAW. It can maintain a live view of the scene (with short blackouts) up to 8fps whereas at 11fps, it shows you the last image taken.

Another difference is that the Canon accepts an UHS-II memory card whereas the Sony only works with UHS-I cards.

The Sony also comes with an electronic front curtain shutter option which helps to eliminate camera shake (or “shutter shock”) originating from the shutter mechanism.

Neither camera offers on-sensor image stabilisation in the traditional sense but the Canon does feature something called Dual Sensing IS, which is a combination of lens and software stabilisation. With it enabled, you can suppress a wide range of vibrations. However it only works with the following optics:

The Sony has a marginally better battery life than the Canon despite using the old NP-FW50 pack. It can take an average of 380 shots with the EVF or 420 with the rear LCD. The Canon is more limited, offering 305 shots in normal mode or 410 shots in Eco mode.

Both cameras can be charged over USB. Note that the Canon uses the more recent USB Type C port whereas the Sony uses the older Micro USB terminal.

On paper, the EOS M6 II and a6100 appear to be equally matched in most areas. The Canon may have a little more sensor resolution and better burst speeds while the Sony has the advantage of a built-in viewfinder, but overall, there isn’t much that separates these two mirrorless models.

The biggest difference is that the Sony is around $100 less expensive than the Canon if you consider the body on its own or $250 less expensive with the kit lens. I wouldn’t be surprised if this price gap were enough to push most budget conscious users in the direction of the Sony model.

Check price of the Canon EOS M50 on B&H Photo