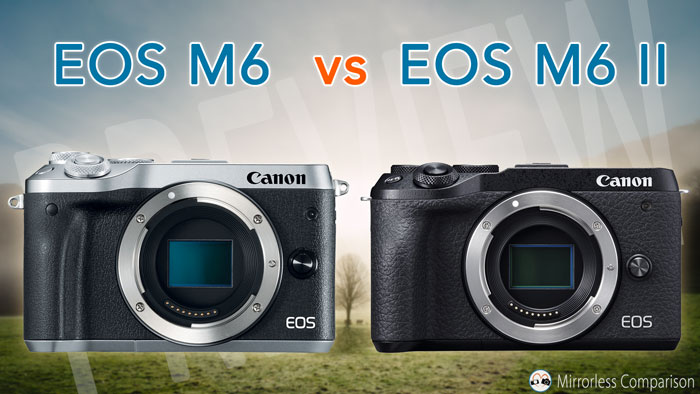 The EOS M6 mark II is the most recent model in Canon’s range of compact mirrorless cameras with an APS-C sized sensor. It blends features from both the previous flagship model, the EOS M5, and its official predecessor, the EOS M6.

In this comparison preview, we’re going to be looking at all the main ways in which it compares to the original M6!

Let’s begin with a couple of the most significant updates: the sensor and processor.

The new EOS M6 II sports the highest resolution APS-C sensor on the market with an impressive 32.5MP. The original M6, with its 24.2MP sensor, offers the same resolution as many other current crop sensor cameras from Canon’s competitors.

Combined with the new DIGIC 8 processor, the M6 II boasts improved low-light shooting, with an extended ISO value of 51200 in addition to its native range of 100 to 25600.

The M6 is equipped with the same native range but lacks the extended value. It uses the older DIGIC 7 processor which isn’t as powerful.

Although the appearance of the two cameras is quite similar, the new model features a handful updates that make it more user-friendly.

In addition to having a deeper grip than the M6, it is also slightly larger and heavier:

The exposure compensation button on the M6 has been replaced by the Dial Function button of the M5 and a new AF/MF switch with an AF-On button in the middle can now be found on the rear.

Unfortunately the M6 II didn’t inherit the built-in viewfinder of the M5 but as with the M6, you can still attach an external viewfinder to the hot shoe. Both offer the same 1040k dot touch sensitive LCD monitor which can be tilted up 180 degrees and down 45 degrees.

The M6 II’s interface includes a USB 3.0 port with Type-C connector whereas the previous model relies on a Micro USB 2.0 connector. Both have a 3.5mm microphone jack but no headphone output.

Despite both cameras being equipped with Canon’s much-loved Dual Pixel CMOS AF system, the M6 II boasts a more advanced version that should make it an excellent companion for sports and wildlife.

Whereas the M6 only had face detection, the M6 II boasts both face and eye detection. It is effective for stills in both single shot and burst shooting modes with tracking, as well as movie shooting.

Speaking of continuous shooting speeds, it’s worth pointing out that the M6 II is a much faster camera than its predecessor, capable of shooting at speeds up to 14fps with AF tracking. By comparison, the M6 was only able to manage 7fps with AF tracking or 9fps with fixed AF.

Electronic shutters are commonplace on most of today’s modern mirrorless cameras so it is encouraging to see the M6 II receive this update. With the e-shutter activated, it can shoot at speeds up to 1/16000s.

The M6 II also brings some big and somewhat surprising updates to the video department. Unlike the M6, which was limited to Full HD at up to 60fps, the new camera is capable of shooting 4K video at 25 or 30fps and Full HD up to 120fps. There are also two new 4K modes: time-lapse and 4K frame-grab.

Also interesting is the lack of a crop in 4K – an issue that has plagued all of Canon’s 4K capable cameras up until now.

Dual Pixel CMOS AF works in video mode on both cameras, but only the M6 II enables face and eye detection while recording video.

While both cameras continue to offer WiFi connectivity, the M6 II has dispensed with the M6’s NFC technology in favour of Bluetooth connectivity. It allows you to share images and movies via the Canon Camera Connect app, perform remote shooting, and automatically sync images to your smart device.

Although both cameras utilise the same LP-E17 battery, the M6 II allows you to take more shots on a single charge than the M6 (305 vs 295) – a surprising fact given that the M6 II is the more power-hungry model.

Only the M6 II can be charged over USB. To charge the M6 battery, you must pop it inside the folding plug charger that comes with the camera.

There are a couple of extra features on the new camera that don’t really belong anywhere else.

One is focus bracketing which allows you to take a series of shots with different focus points. These shots can then be assembled in post production to create a final image with a deeper depth of field.

Second is the Creative Assist mode which helps newcomers to photography adjust important settings such as brightness, contrast, and saturation before taking a shot.

We can see very clearly from the specifications just how substantial an update the M6 II is compared to its two year old predecessor. It offers everything you could ever want from a modern mirrorless camera: a great sensor, fast burst speeds, an advanced autofocus system, 4K video capabilities, an electronic shutter and much more.

If you are eager to keep up-to-date with the latest mirrorless technology and prefer Canon to all other brands, the M6 II is by far the best choice. If you are a beginner, on the other hand, and would be happy with a straightforward camera that offers good image quality and performance at a reasonable price, the M6 is still a worthy contender.

The only glaring omission on both models is, of course, the built-in electronic viewfinder but there is always the option to purchase the external EVF-DC2 if the LCD screen isn’t enough for your needs.

Check price of the Canon EOS M6 on B&H Photo