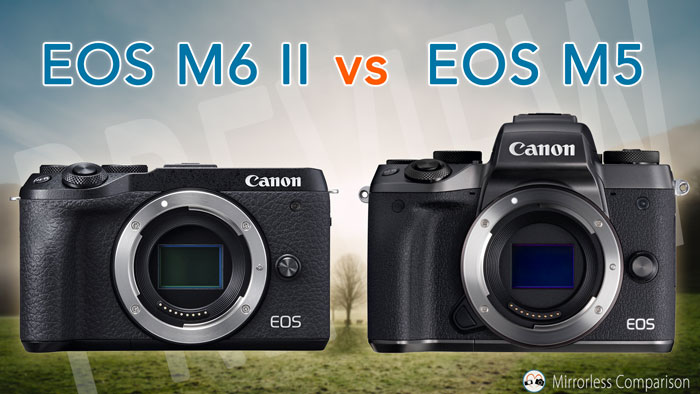 Until today, the Canon EOS M5 was the flagship model in the EOS M series of mirrorless cameras. The new EOS M6 II supplants not only its predecessor, the EOS M6, but also the M5 – yet in some ways, it isn’t quite as advanced as the former flagship as we’ll discover below!

Ethics statement: The information found in this article is based on official specifications and our experience with the EOS M5. We were not asked to write anything about these cameras, nor were we provided any compensation of any kind. Within the article, there are affiliate links. If you decided to buy something after clicking the link, we will receive a small commission. To know more about our ethics, you can visit our full disclosure page. Thank you!

Let’s start this preview with a couple of the most interesting updates: the sensor and processor.

The EOS M6 II houses a brand new 32.5MP APS-C sensor, making it the mirrorless model with the highest resolution sensor on the market amongst APS-C models. The M5 offers a more modest 24.2MP, which is the resolution you can expect from most modern APS-C cameras from Canon, Sony and Fujifilm.

Thanks to the new DIGIC 8 processor, the M6 II delivers improved low-light performance, with an extended ISO value of 51200 in addition to its native range of 100 to 25600. The M5, which uses the older DIGIC 7 processor, has the same native ISO range but lacks the extended value.

What becomes obvious the minute you set your eyes on both models is that the M5 is the only one with a built-in electronic viewfinder. It is a 0.39-type OLED finder with approximately 2360k dots of resolution, 100% coverage and a 22mm eye-point.

The absence of a viewfinder on the M6 II is the one thing that could cause many potential users to pause for thought before settling on the new model. That said, if you find yourself desperately in need of an EVF for the M6 II, there is the option to attach an external viewfinder to the hotshoe such as the EVF-DC2 which has the same specifications as the M5’s finder. This finder will obviously reduce the camera’s compactness if left attached.

Both cameras are equipped with a tilting touch sensitive LCD screen but their specifications are quite different.

Besides the absence of an electronic viewfinder on the M6 II, there are a few other physical differences worth mentioning.

To start with, the M5 is slightly larger and heavier than the M6 II. This is mostly due to the protrusion on top that houses the viewfinder and the pop-up flash.

The M6 II comes with a brand new AF/MF switch on the rear, complete with an AF-On button at the centre, whereas the M5 has a dedicated exposure compensation dial on top.

Turning to the interface, we find a USB 2.0 port with Type-C connector on the M6 II whereas the M5 relies on a Micro USB connector. Both have a pop-up flash on top – albeit in different positions – and a 3.5mm microphone jack. Sadly neither comes with a headphone jack.

Whereas the M5 only offers face detection, the M6 II boasts both face and eye detection. It is effective even when tracking a subject in burst shooting mode and when recording movies.

Accompanying the M6 II’s advanced autofocus algorithm are some pretty impressive continuous shooting speeds. It is capable of shooting as fast as 14fps with AF tracking, which is ideal for fast action and wildlife.

The M5, by comparison, is capped at 7fps with AF tracking or 9fps with the AF fixed on the first frame.

We should also be able to expect better buffer performance from the M6 II since it accepts UHS-II memory cards.

A surprising omission from the M5 was the electronic shutter so it is encouraging to see that the M6 II has received this long overdue update. With the e-shutter activated, it can shoot at speeds up to 1/16000s, but be aware that rolling shutter can occur when dealing with fast moving subjects. With the mechanical shutter, both cameras are limited to 1/4000s.

The electronic shutter also enables a new RAW Burst mode on the M6 II. With it activated, you can shoot 18MP RAW files at 30fps with continuous focusing. There is also a new Pre-shot option that allows you to capture the action before fully pressing the shutter button.

Video is another area where the M6 II excels compared to the M5. Whereas the flagship model is limited to 1080p at up to 60fps, the M6 II is capable of shooting 4K video at 25 or 30fps and Full HD up to 120fps. There are also two new 4K modes: time-lapse and 4K frame-grab.

We were also delighted to discover that the M6 II doesn’t crop the frame when filming in 4K. This is a big departure from other 4K-capable models from Canon, all of which perform a disappointingly large crop at this resolution.

Dual Pixel CMOS AF works in video mode on both cameras, but only the M6 II enables face and eye detection while recording video.

Now let’s take a look at a couple of extra features found on the M6 II that don’t really fit in elsewhere.

The first is focus bracketing which allows you to take a series of shots with different focus points. By merging these shots in post production, you can create a final image with a deeper depth of field.

Another long overdue addition is the possibility to charge the M6 II over USB. With the M5, you have to use a separate charger which isn’t as convenient as being able to charge the camera directly.

Although prices vary depending on the retailer and discounts offered by the manufacturer, the M5 can usually be found for an average of $679 US (body only) or $799 US with the same kit lens.

The time has come for the ageing EOS M5 to relinquish its flagship title, and the EOS M6 II is certainly a worthy successor if we can ignore the lack of a built-in viewfinder. It has everything a budding photographer might want from a portable mirrorless camera including a top-of-the-line sensor, great autofocus performance, excellent video capabilities, fast burst shooting, and much more.

That being said, the M5 is still a valid option, especially if you are more interested in still photography than video. There is also a higher chance you’ll find it at a bargain price these days now that the M6 II has been released.