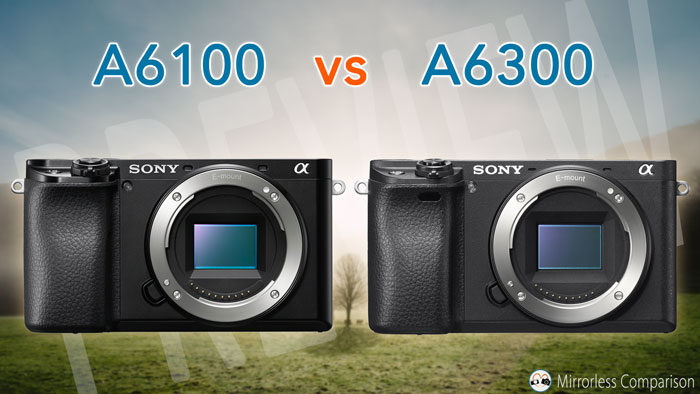 The A6300, which was announced more than three years ago, is being discontinued now that Sony has revealed three new APS-C models: the a6100, a6400 and a6600. However, you can still find the camera in many stores and on the second-hand market.

You may be wondering if the recent A6100 is the better choice given that they share a near-identical design and are similarly priced. Here you can find out the most important differences between the two E-mount cameras.

Ethics statement: the following is based on official press releases and our direct experience with the a6300. Within the article, there are affiliate links. If you buy something after clicking one of these links, we will receive a small commission. To know more about our ethics, you can visit our full disclosure page. Thank you!

The design of these two cameras is nearly identical, but there is an important difference concerning the rear monitor.

The A6100 features a rear screen that is touch sensitive and can be tilted up 180˚. You can move the focus point or activate real time tracking, as well as shoot V-logs or selfies with ease.

The a6300, being an older model, lacks touch sensitivity and the monitor can only be tilted up to about 90˚.

The size and resolution of the LCD panel is the same: 3-inches with 921k dots.

The rest of the specifications are the same: 0.39-in large, 0.7x magnification and 23mm eye point.

Unlike the A6100, the A6300 is sealed against dust and moisture, and the body is made of magnesium alloy.

The minimum sensitivity in low light is -2Ev for the A6100 and one stop less effective on the A6300 (-1Ev, both measured with an f2 aperture).

Specifications and numbers aside, one of the main differences between these two cameras is the autofocus algorithm. The a6100 inherits the latest version that gives a significant boost to the tracking capabilities: it now works in real time and analyses the subject on different levels such as colours, patterns (brightness), distance, faces and eyes to be more precise.

Sony’s leading Eye AF technology is available on both cameras and works in single and continuous modes. Here as well the one found on the A6100 is more advanced: it works in real time and with animals in addition to human beings.

We tested the latest AF capabilities on the A6400 and we can confirm that the tracking capabilities and eye detection are truly excellent.

The two cameras can shoot up to 11fps. Live view is available up to 8fps (with blackouts), whereas the last image taken is shown with the fastest burst.

With the electronic shutter, the A6100 can shoot up to 8fps, whereas the a6300 doesn’t go faster than 3fps.

Concerning sensitivity, the updated image engine allows the a6100 to receive a small increase. It goes from 100 to 32000 ISO with push values up to 51200 ISO.

Both cameras can record 4K video up to 30fps with full pixel readout (6K of information is used and downscaled to 4K for extra sharpness). Internal recording is 8-bit 4:2:0 while an 8-bit 4:2:2 signal is available via HDMI. There is a mic input but no headphone port. In Full HD, you can record up to 120fps.

There is one important thing missing from the A6100: the Picture Profiles. These settings, designed specifically for video use, allow you to adjust many parameters as well as choose gamma curves such as S-Log2 and S-Log3. Your only option on the 6100 is the Creative Styles which give you less dynamic range and can clip highlights much more easily.

The a6100 has built-in time-lapse capabilities and you can create a time-lapse video with the Imaging Edge software (freeware).

The a6300 doesn’t feature this function built in. You have to download the app from the Playmemories store, and it won’t come for free. The good news at least is that there are other interesting apps to buy from the store if you want to increase the extra features on your camera. The A6100 is not compatible with these apps.

The a6300 has an old version of the main menu. It is more disorganised and you’ll find yourself going back and forth between pages to pinpoint the setting you’re looking for.

The a6100 has the latest version which is not only better organised, but also features the My Menu page where you can save your most used settings.

Customisable buttons are available on both cameras.

Unlike the A6300, the A6100 features Bluetooth which is useful for geo-tagging your images. You’ll need to connect the camera to your smartphone in order to do that.

The a6300 is an older model but was launched at a higher price two years ago. You can now find it for about the same price.

Note that the A6300 is being discontinued but you may still be able to find it bundled with a lens, or with special offers.

For the same price, I would say that the A6100 is the better choice if you want a taste of the best autofocus performance on the mirrorless market – something that will seamlessly allow you to capture pictures of your kids and pets without much effort.

The A6300 does retain a few advantages however: the higher resolution of the viewfinder along with the picture profiles for video make it a more complete package. But if you don’t care about these things, then you’re probably better off with the new model – unless of course you can find the a6300 at a bargain price.