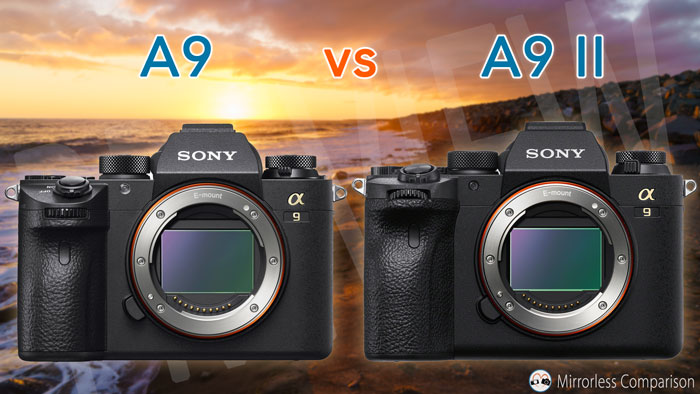 Two years following the Sony A9’s breakthrough into the mirrorless world, Sony has announced it successor: the A9 mark II. Unlike the original model, the II version doesn’t bring anything revolutionary. Rather it refines certain aspects based on feedback from professional photographers. Here is how the two models differ!

Ethics statement: The following is based on our personal experience with the A9 and official information from Sony. We were not asked to write anything about these products, nor were we provided with any sort of compensation. Within the article, there are affiliate links. If you buy something after clicking the link, we will receive a small commission. To know more about our ethics, you can visit our full disclosure page. Thank you!

The A9 mark II inherits the same design upgrades seen on the A7R mark IV. It is slightly larger than the original A9:

Most notably, it receives a larger grip in comparison to the A9 that improves handling and comfort. We tested this first hand with the A7R IV and we’re happy to say that Sony is finally on the right track.

The buttons and dials have been improved. They are thicker and offer better tactile feedback. The AF-ON button is larger, the AF Joystick has a new texture, the rear top dial has more surface to grab onto, and the exposure compensation dial can be locked. The drive dial on top is the same and remains unique to the A9 series for now.

Sony states that the weather sealing has been improved on the A9 II with strong sealing across the entire body, as well as the battery and memory card compartments.

Some tweaks have been made to the menu system as well, such as the visual graphics when customising the function buttons and the possibility to configure the Fn menu for stills and video separately, just like on the A7R IV.

2. Drive speed with the mechanical shutter

Both cameras can shoot at 20fps with the electronic shutter, but the A9 can only go up to 5fps with the mechanical shutter. The A9 II doubles this performance to 10fps.

Sony has said that the shutter mechanism of the new camera has been re-designed. It features an internal damper structure to reduce shutter vibration and noise, and the durability as been tested up to 500,000 cycles.

Missing from the original A9 was the anti-flicker shoot mode that allows the camera to detect and adjust the exposure when fluorescent lights are present in the scene.

The A9 II has this function but keep in mind that it doesn’t work in video more or when using the electronic shutter.

Guide:
Sony A7 / A9 Settings for Sports

The most interesting improvement in the AF department is Eye AF for video. It is the second full frame camera after the A7R IV to get this option. We tested it on the mark IV model and it works really well. It adds both precision and reactivity when using fast apertures especially.

Sony claims an optimised algorithm for the autofocus of the new camera that improves precision and performance, as well as the possibility of tracking at apertures smaller than f/16 when the Aperture Drive in AF option is set to Focus Priority. Note that this is only compatible with select lenses (FE 200-600mm, FE 35mm f1.8, FE 400mm f2.8 GM and FE 600mm f4 GM). The A9 is already the best mirrorless cameras when it comes to AF performance, but even the smallest improvements are welcome.

Another tidbit: you can move the AF point from one side of the screen to the other with a dedicated setting.

Both cameras feature 5-axis in-body stabilisation (IBIS). The A9 has an official rating of 5Ev whereas the A9 II gets a small upgrade with a rating of 5.5Ev.

Of course we have yet to see how much of an improvement it brings to the image stabilisation performance in the real world.

Our experience with the A9 was fine but as with most Sony cameras, it isn’t the most impressive stabilisation system out there. Let’s wait and see what the A9 II can do.

Sony has insisted in their press release that the A9 II is the result of countless conversations with professional photographers and photography agencies. One of the most important improvements concerns wireless and wired connectivity.

Both cameras have a LAN terminal and support background transfer to FTP serves, but the A9 II can now do this over SSL and TLS encryptions (FTPS) for added security. FTP settings can be sent to the camera via Bluetooth from the Imaging Edge App on your mobile device.

The wireless is faster on the A9 II and supports 5Ghz instead of just 2.4Ghz on the A9.

The USB Type C port also has faster transfer speed thanks to the upgrade to the 3.2 Gen 1 socket.

Finally, Sony says that tethering has been improved with a reduced time lag for transfer and in the live view in the ‘Remote Camera Tool’ desktop software.

Something I’ve seen photo-journalists do a lot with their DSLRs is record a quick memo after taking a series of shots. For example, at an award ceremony where lots of prizes are given, it can be useful to vocally record the name of each person after taking their picture to make sure you don’t mix up the images when sending them to the photo editor.

Sony has listened to that too and the A9 mark II gets a new Voice Memo option. The sound data can be sent right with the images to an editor even via FTP.

Furthermore, the audio data can be converted to text and included in the IPTC metadata of the JPG images when transferring the photos to a mobile device using the Imaging Edge software.

Both cameras feature two SD card slots, but on the A9, only the first slot is compatible with the faster UHS-II cards.

On the A9 mark II, both slots are UHS-II compatible.

Like the A7R IV, the Multi-Interface shoe on top is compatible with digital audio and the new ECM-B1M microphone.

The A9 II might feel like a disappointing update if you were hoping for a new sensor or other advanced specifications. The truth is, it’s not on the inside that the camera needed some refreshments. The new grip is a welcome upgrade, as are the various refinements to the buttons and the stronger weather sealing.

Then we have improvements that target specific users, the ones that spend most of their time shooting sports or social events where sharing pictures right away is paramount.

In short, it may not be as exciting as other announcements, but it shows Sony’s will to reinforce its presence in the professional environment.

Check price of the Sony A9 II on
B&H Photo