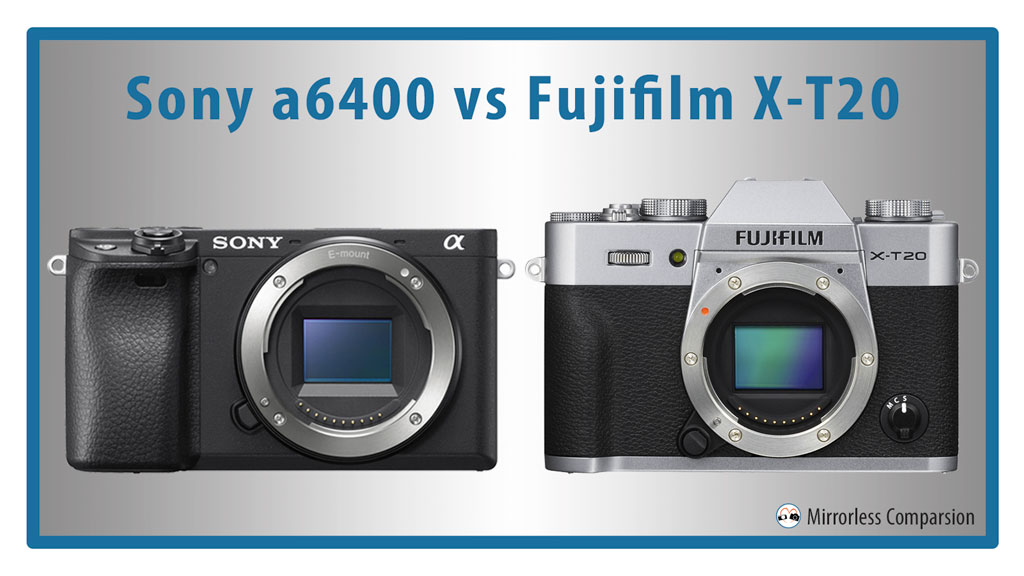 Sony has been rather quiet on the APS-C front for the past two years, preferring to concentrate on developing its extremely successful full-frame A7 series. By contrast, Fujifilm’s APS-C family of cameras, the X-series, has grown by leaps and bounds in the same period of time thanks to powerful models such as the X-T2 and X-T3, as well as mid-range products such as the X-T20 which pack the same technology as the high-end models at a more affordable price.

In early 2019, Sony finally released a new addition to its APS-C line-up: the mid-range a6400. So what better mirrorless camera to compare it to than the Fujifilm X-T20?

Ethics statement: the following is based on the official press release and our personal experience with the Fuji X-T20. Within the article, there are affiliate links. If you buy something after clicking one of these links, we will receive a small commission. To know more about our ethics, you can visit our full disclosure page. Thank you!

The a6400 has a rangefinder type design with the electronic viewfinder located on the side. In comparison to the Fuji model, the front grip is larger which helps when handling big lenses.

The X-T20’s viewfinder is placed at the centre. It sticks out from the top to mimic the classic pentaprism design of SLRs.

The Sony model is slightly larger (2mm or so) but obviously not as tall due to the EVF solution. The X-T20 is lighter by approximately 20g. Needless to say, these are two compact and lightweight mirrorless cameras.

The a6400 features a more robust construction with a magnesium alloy body, as well as dust and moisture resistance.

They are available in two colours (black and silver). They feature a built-in flash and can be charged via USB. The battery life has a similar rating with 360 shots for the Sony and 350 for the X-T20 (CIPA standards).

The a6400 has a tilting mechanism that allows you to move the screen up 180° which becomes useful for selfies or video logs. Concerning the latter, it’s a shame that Sony didn’t opt for a multi-angle solution as that would have freed up the hot-shoe for various accessories such as a microphone. The monitor can also be tilted down by approximately 74°. 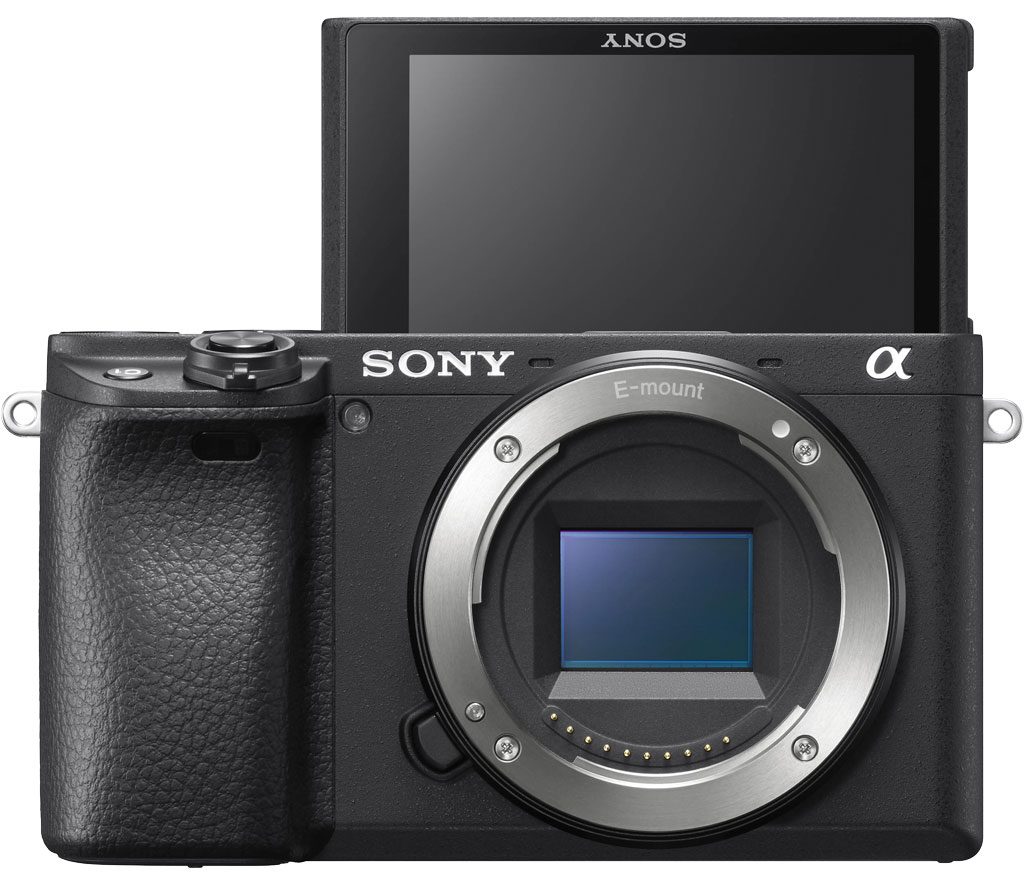 Both panels are touch sensitive. On the a6400, it can be used to move the focus point or start tracking a subject. On the Fuji model, you can also use it to take a picture.

The a6400 shares the same button interface as the a6300 and a6500. There is a PSAM dial and exposure dial on top, a control wheel on the rear and a good number of custom buttons with more than 80 options to choose from.

The X-T20 has more intuitive dials such as shutter speed, drive and exposure compensation. There are seven function buttons and a focus mode selector on the front.

Both have a quick menu that can be customised and a My Menu page that allows you to save your favourite settings for quicker access.

As for the menu system, I personally prefer the Fuji design as it is better organised.

The a6400 features an advanced hybrid autofocus system with 425 phase and 425 contrast detection points. Focus acquisition is rated at 0.02s which is the world’s fastest.

The Sony is the first E-mount camera to feature the new autofocus algorithm that the brand calls Real-Time Tracking. It can analyse colour, patterns (brightness), distance, and face and eye information to track the subject faster and more accurately.

The renowned EyeAF has been improved as well. You can now prioritise the left or right eye or leave it to auto. It can be activated automatically when half-pressing the shutter button (no need to assign it to a function button). Even more interesting is that a future firmware update will enable EyeAF for animals!

The X-T20 also utilises a hybrid autofocus system but it has just 91 points. 49 of them are phase detection points and are found at the centre. These AF points can be subdivided into a 13×25 grid (325 in total) depending on the settings used. The algorithm has received some tweaks via firmware update to improve the performance.

Fujifilm hasn’t disclosed the minimum sensitivity in low light whereas we know the a6400 is rated at -2Ev (f2 lens).

Overall the Fuji camera performed very well in our tests, but its face and eye detection is not as reliable as the one we used on many Sony products.

Both cameras offer the possibility to tweak the autofocus behaviour to make it more or less responsive. The X-T20 offers more choice in this regard with five presets designed for different type of subjects.

The a6400 can shoot in continuous mode at up to 11fps. Up to 8fps, live view (with short blackouts) is available. With the electronic shutter, the maximum speed is also 8fps.

The X-T20 has a maximum burst speed of 8fps, or 5fps if you want live view. With the electronic shutter however, it goes up to a whopping 14fps. Note that all the speeds mentioned here are available with Single and Continuous autofocus.

The Sony camera has a better buffer, being capable of capturing 99 JPGs or 46 RAW files at the maximum shooting speed. The X-T20’s rating is 62 JPGs and 25 RAW files at 8fps.

Both cameras can shoot at a maximum of 1/4000s with the mechanical shutter.

A small yet interesting option in favour of the X-T20 is that it can raise that speed to 1/32000s with the electronic shutter, something the a6400 can’t do.

Both cameras feature an APS-C format sensor with 24 megapixels (24.2MP for the Sony, 24.3MP for the Fuji to be precise).

One of the the main differences in sensor technology is the pixel arrangement. The a6400 uses a standard bayer array where each line has two out of three RGB colours (either blue and green or red and green). The X-T20 has a proprietary X-Trans pattern that ensures the presence of at least one R G B pixel in every horizontal and vertical row. 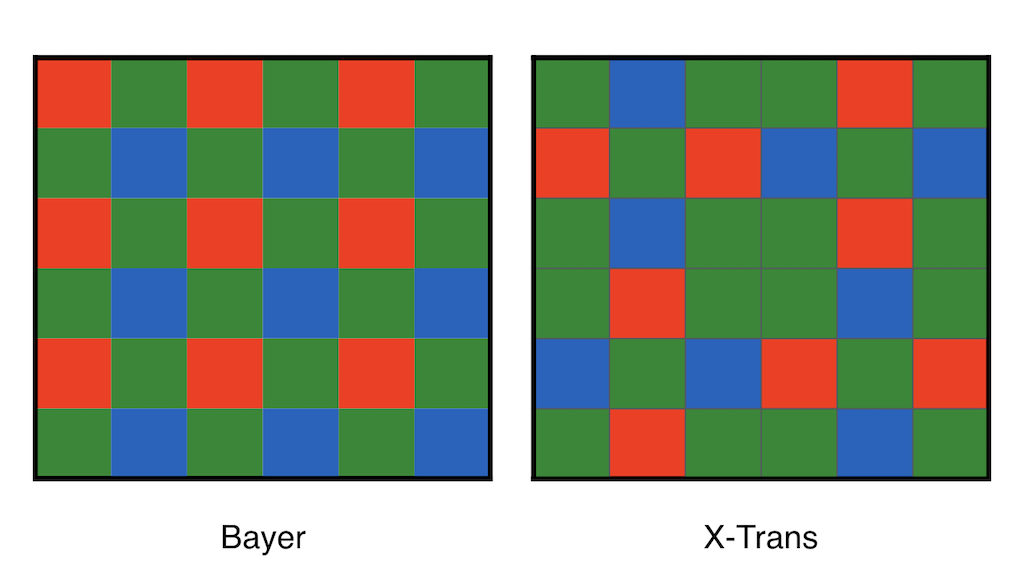 Fujifilm claims that the X-Trans sensor offers better colour accuracy and sharpness despite not having an AA filter to reduce moiré. However the RAW files have often been at the centre of controversy because some software (Lightroom notably) are worse than others at demosaicing the files. While recognising and analysing this in many of our comparisons, I’ve personally never considered it to be a big issue.

There is also something interesting about the a6400’s sensor structure: it has a front-end LSI chip that helps the camera process data faster and according to Sony, improves the image quality a little (though we’ve never found a relevant difference in our tests with the a6300/a6500).

Both cameras can record 4K video up to 30fps / 100Mbps but there are some differences if we dig deeper below the surface.

First, both use the entire width of the sensor (so no crop in field of view) but unlike the X-T20, the a6400 can do so with full pixel readout which means it doesn’t skip any pixels and uses a larger amount of information (6K equivalent) to produce the 4K footage. This results in better details and no aliasing.

The Sony model offers more settings to control the image output, including two Log and one HDR profile. The X-T20 uses the same film simulation modes available for stills.

The recording time is another key point: in 4K the X-T20 can’t go past 10 minutes per clip, or 15 minutes in Full HD. The a6400, according to the first hands-on reports, seems capable of recording past the usual 30-minute cap we’ve seen on many mirrorless cameras.

The lens selection for the E-mount has expanded considerably since the release of the full frame series. However this also means that the development of smaller APS-C lenses has slowed down. In fact, Sony has only released one APS-C zoom in the past four years.

Many of the lenses available are slow non-constant aperture zooms. Sony has a small selection of fast single focal lengths and thankfully Sigma has built a good series of f1.4 primes that offer great optical quality at an affordable price. There are also options from third-party brands – mostly manual focus lenses. Obviously you can mount Sony’s full frame E-mount lenses on the a6400 but many of these are rather large and heavy for such a small camera, and they are often on the expensive side.

In the past seven years Fujifilm has produced a vast selection of lenses for its APS-C series. There are professional lenses as well as more affordable options and a good number of fast primes too. As of early 2019, you can find 25 lenses plus accessories such as teleconverters, extenders and even two Cine Zooms. What’s lacking is more options from third-party brands. Except for Samyang and a few others, no one else has invested in the X-mount and there aren’t any AF option besides those in the Fujinon catalogue.

The X-T20 is older and can now be found for around $700 / £700 / €650 body only. Those looking to save some money will definitely find the Fuji option more interesting.

The a6400 is an interesting addition to the APS-C E-mount series but doesn’t revolutionise it in any way. Quite the contrary actually. Sony has kept the same design and despite gimmicks such as the 180° tilting screen, the only real improvement I am curious to try is the new AF algorithm that will also come to high-end full-frame cameras later on this year.

In a way, the a6400 offers us a good preview of what this new autofocus system can do. I personally can’t wait to see how Eye AF for animals performs.

When compared to the X-T20, the Sony certainly has many advantages including a vaster ISO range, more settings for video and so on. The Fuji model remains an attractive option however, not only because of its more intuitive interface and lower price, but also because it packs the same sensor and autofocus system as the X-T2 (minus a few software tweaks), which is a very positive thing.

Check price of the Fujifilm X-T20 on B&H Photo