If you’re wondering how to differentiate these three models, the first thing you can do is to simply follow the numbers. The higher the number, the more advanced the camera, although this new entry brings some features none of the others have.

The a6400 bears a strong resemblance to its siblings if we exclude the a6000 (the oldest) and concentrate on the two cameras released in 2016: the a6300 and a6500. The question is: what can this new model bring that the other two don’t already provide? Let’s have a look in this three-way comparison preview!

Ethics statement: the following is based on official press releases and our direct experience with the a6300 and a6500. Within the article, there are affiliate links. If you buy something after clicking one of these links, we will receive a small commission. To know more about our ethics, you can visit our full disclosure page. Thank you!

The a6400 benefits from a new algorithm that improves subject motion tracking: it can detect the subject according to its colour, pattern (brightness), distance, face and eye information.

The minimum sensitivity in low light is one stop more effective on the new camera in comparison to the other two models (-2Ev vs -1Ev with an f2 aperture).

The three cameras feature EyeAF which uses a single phase detection point on the eye of the subject (stills only). It works in single and continuous autofocus. 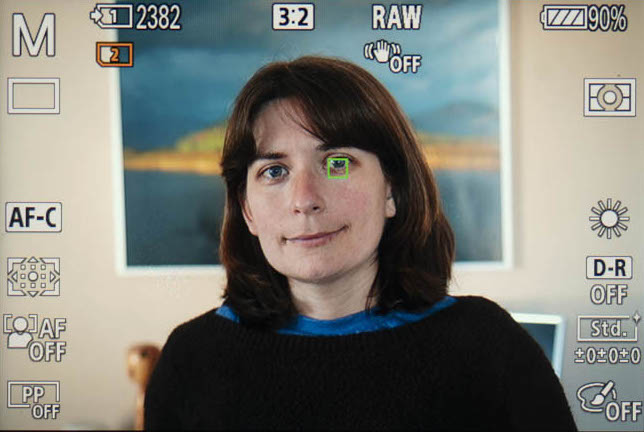 The a6400 receives some interesting improvements: EyeAF now works when you half-press the shutter button (no need to assign it to a custom button). You can prioritise the left or right eye, or leave it on Auto.

A future firmware update (ETA summer 2019) will bring Eye AF for animals. This, combined with the new AF algorithm and 11fps burst speed, could make the a6400 an interesting budget camera for wildlife photography.

2. In-body stabilisation: exclusive to the a6500

The main feature that sets the a6500 apart from the other two models is in-body stabilisation. The sensor shift mechanism works on 5 axes (roll, pitch, yaw, X and Y) and gives your image shake correction with all lenses.

IBIS can be combined with OSS lenses (3 axes on the sensor plus Pitch/Yaw on the lens) and also works with lenses that lack electronic contacts, although only 3 axes are used.

In our extensive test with the a6500, we didn’t find the 5-axis system to be class-leading and it doesn’t provide a significant advantage over optical stabilisation alone. Jittering can be visible during video recording as well. The possibility to get decent results with non-stabilised lenses is therefore the only real advantage.

The a6300 and a6400 lack in-body stabilisation so you must rely on lenses with optical stabilisation, or gimbals for stable video recording.

Out of the three, the a6300 is the model that has the least: no touch capabilities and a standard up/down tilting mechanism.

The a6500 has the same tilting capabilities but comes with a touch panel that can be used to move the AF point and focus (even when composing with the EVF).

The a6400 not only gets enhanced touch capabilities but it is also the only model out of the three that allows you to rotate the screen up 180° which facilitates selfies and V-log work. One criticism however is that any accessory attached to the hot-shoe will make the screen unusable in that position. Perhaps a multi-angle solution with the screen flipped to the side would have been a better choice.

The monitor has the same characteristics on the three cameras: it is 3-inches in size and has 921k dots of resolution.

4. Continuous shooting speeds and buffer: the a6500 has the edge

All three cameras can shoot at 11fps with the mechanical shutter. Up to 8fps, live view with short blackouts is available, whereas at the highest speed you see the last image taken.

The a6400 receives an improvement when using the electronic shutter: burst is available up to 8fps, whereas with the a6300/a6500, only the lowest 3fps speed can be used.

The a6500 has a higher score when it comes to buffer depth. It can record 233 Extra Fine JPGs or 107 RAW frames at full speed.

I have to say I’m a bit surprised that the a6400 doesn’t share the same buffer capabilities as the a6500 since they both have the same sensor structure with a front-end LSI chip that is supposed to boost the processing speed among other things.

The three cameras are based around the same 24.2MP APS-C Exmor CMOS sensor. One thing the a6300 doesn’t share with the other two models is the LSI chip that increases the processing capabilities as mentioned in the chapter above. 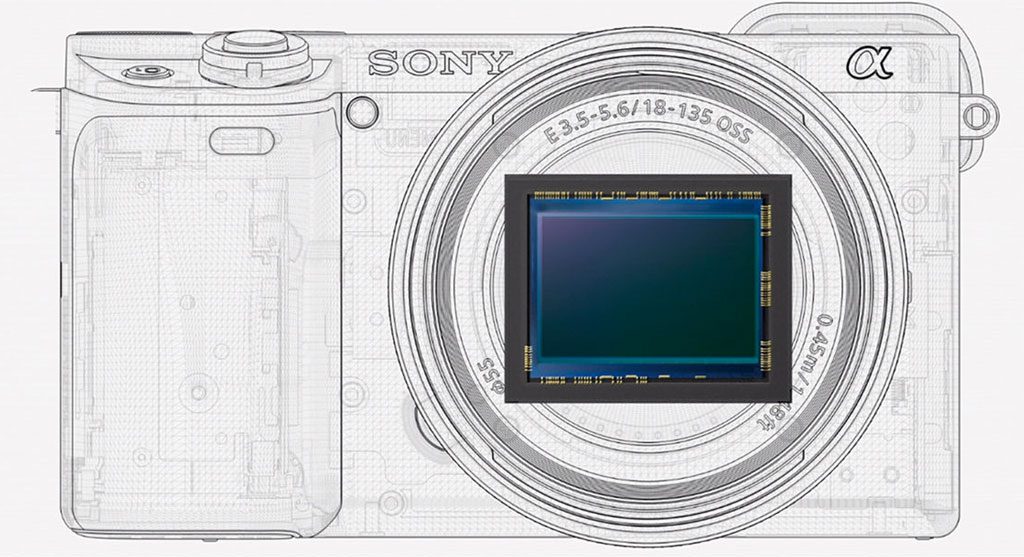 Despite Sony claiming better performance on the a6500 model, the only thing we found in our full comparison was slightly less noise with NR set to Normal for the JPG files.

The a6400 receives a small enhancement to the normal range. It now reaches 32000 ISO while the push values go up to 102400 ISO. We have yet to see how much of a difference this will make in the real world, but it’s reasonable to think that there won’t be a huge improvement (of course we’re always happy to be proven wrong!).

Note that in video mode, the push values are not available.

6. Time-lapse: you can get it one way or the other

Owners of the a6300 and a6500 can benefit from the PlayMemories Camera Apps store. There are lots of interesting adds-on for your camera including Digital Filter, Sky HDR, etc. The bad news is that many of these apps don’t come for free, and amongst those is the Time-Lapse app (the cameras don’t have a built-in intervalometer).

In the last two years, Sony seems to have removed compatibility with the PlayMemories apps on its latest products such as the third-generation A7 series, which mean that the only option to have time-lapse on these products is to buy an external intervalometer.

The a6400 signals the return of time-lapse capabilities in-camera and this time it is built-in by default. You also get the option of creating a time-lapse movie with the Imaging Edge desktop suite (freeware). Hopefully this new version will come to other cameras via firmware update.

The three cameras can record 4K video up to 30fps using the entire width of the sensor and performing full pixel readout (6K of information is used and downscaled to 4K for extra sharpness).

A clean 4:2:2 8-bit signal is available via HDMI and there is a 3.5mm mic input but no headphone output.

In 1080p, they can record up to 120fps and you can choose to have slow motion directly conformed in camera (HFR mode on the a6300), or record as normal and slow down the footage in post production. On the a6400 and a6500, the Quick&Slow mode allows you to choose frame rates from 1fps to 120fps which means you can also create quick motion videos.

All three cameras come with dedicated Picture Profiles that can be customised, and this is where you also find the S-Log2 and S-Log3 gamma modes to record more dynamic range and colour grade in post. The a6400 gets HLG profiles (HDR) to be used with compatible devices.

Another interesting thing discovered by Jordan Drake of DPreview TV is that the a6400 seems to have ditched the 30 minute limitation per clip (at least on the US model).

The a6300 lacks an extra option: the possibility to extract 8MP still JPGs from 4K footage.

The a6300 and a6400 are nearly identical in terms of dimensions, weight and design. The viewfinder is the same: it features a 0.39-in OLED panel with 2.6M dots and a magnification of 0.7x.

The a6500 resembles the other two models a lot and you need to pay attention to the details to spot some differences.

For example, the grip has slightly different design that makes it a bit more prominent.

On top you can notice two custom buttons instead of one, as well as slightly larger On/Off switch and shutter button. The texture of the exposure dial is different as well (see below images from our a6300 vs a6500 article to get an idea).

The choice to keep the design relatively similar certainly provides a sense of familiarity, but it will most likely bring some limitations to ergonomics and ease of use, as we saw with the other two models.

Last but not least we have the battery life. The three cameras all use the small NP-FW50 battery. The CIPA ratings are quite similar with the a6500 being the worst.

9. Menu system and other tidbits

The a6300 has the old version of the menu system, which is the opposite of user-friendly. The a6500 gets a minor update where the various options are better organised and each page has a title to help you understand which settings you’re looking at. We’re still far from optimal.

The a6400 seems to have received the latest interface seen on the third generation A7, which is another step in the right direction. It also has a My Menu page where you can shortcut your favourite options.

There are other minor differences worth highlighting, in no particular order, starting with a few exclusive to the a6400:

Then we have features only the a6300 lacks, such as:

Note: the prices are retail for body only. Instant rebates, special deals and cash backs throughout the year can vary.

The simplest way to summarise these three cameras is as follows:

Although we have yet to test the new camera, image and video quality should be very similar except for a small improvement to high ISO performance, and that probably won’t be a killer feature.

Certainly when we analyse all the specifications, the a6400 appears to be the most attractive option: it has a competitive price tag, a more advanced AF system, good burst speeds and a 180° tilting touch screen. Only 5-axis stabilisation is missing, which is a shame since vloggers could definitely benefit from it.

If you’re happy not to have the latest improvements, the a6300 is still a valid choice and I suspect its price will go down even further this year.

As for the a6500, I often discard it in favour of the a6300 given the price gap, and now that the a6400 has entered the game, I might put it in the corner for good since its 5-axis IBIS never impressed me.