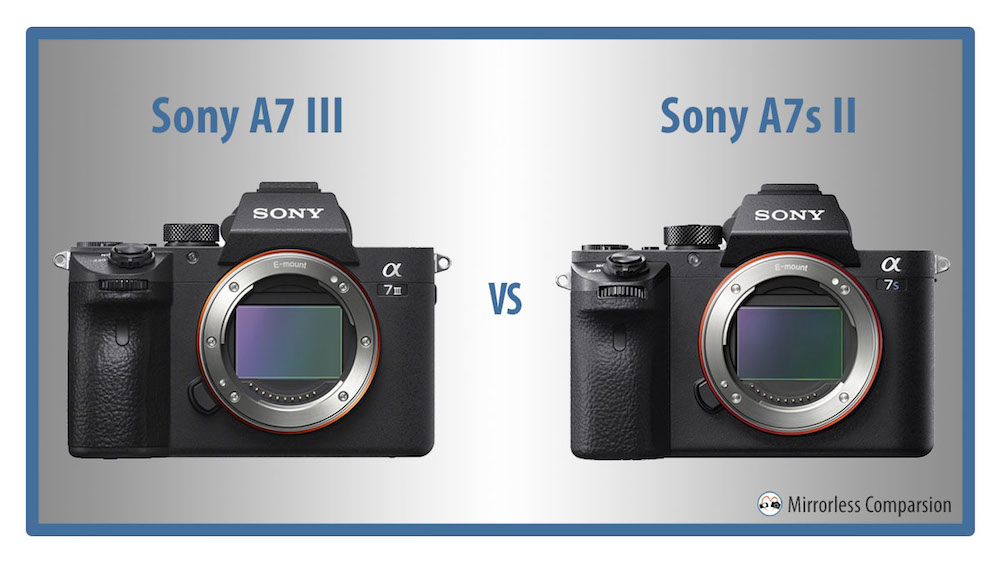 If you are interested in video, the choice from Sony can be quite overwhelming. Most of its mirrorless interchangeable lens cameras feature high quality 4K video, lots of image control and excellent performance in terms of dynamic range and high ISOs.

The most video-centric camera in the A7 range is without a doubt the A7s II. Despite being more than two years old, it is still the weapon of choice of professional productions, especially those that wish to take advantage of its impressive low-light capabilities. So how does the camera stand up against the latest arrival in the full-frame E-mount range, the A7 III? Here is a preview to give you a better idea!

Ethics statement: The information supplied in this article is based on the official specifications found on the official website and our separate experience with the A7S II and A7 III. We were not asked to write anything about these cameras, nor were we provided with any sort of compensation. Within the article, there are affiliate links. If you decided to buy something after clicking the link, we will receive a small commission. To know more about our ethics, you can visit our full disclosure page. Thank you!

Before we delve into this particular topic, it is important to mention that the sensors found inside these two cameras have been engineered for different purposes.

The A7S II features a full-frame sensor with 12.4MP. This resolution may sound low by today’s standards but it brings one important advantage: because the pixels are larger, they allow the camera to have a wider sensitivity range that starts from 100 and goes up to 102400, or 409600 with the extended values. This is valid for stills and video, the latter being the main target of this camera.

We had the chance to test the camera a few years ago and the quality it delivers up to 25600 ISO is certainly impressive. Below you can watch a video we made at a Halloween event.

The A7 III has a newly developed 24MP Back Illuminated sensor. It offers a good balance in terms of resolution in that it has enough megapixels for stills without being too excessive for video. Sony claims this new sensor has 15 stops of dynamic range, which is better than the 13.3Ev of the A7s II as measured by DXO. In our test with the camera we find it to be really good when using the picture profiles or the S-Log2/S-log3 gamma curves.

Both cameras can record in 4K up to 30fps using the XAVC S codec, which works at 100Mbps.

They both use the entire width of the sensor to perform full pixel readout without pixel binning, meaning that all the pixel are used to create the video files. Here the A7 III could have a small advantage in terms of sharpness because it uses more pixels (6K of resolution) that is then downscaled to 4K. However when recording at 30p, it performs a small crop on the sensor (1.2x) unlike the A7S II.

Below: a 4K video sample from Sony on YouTube

You’ll find picture profiles including S-Log2 and S-Log3 on both cameras, but the A7 III has an additional Hybrid Log Gamma curve, which is compatible with HDR televisions.

Both cameras can record at a maximum of 100fps (PAL) or 120fps (NTSC) in 1080p, giving you pleasant slow motion footage. However the A7s II crops the sensor by a heavy 2.2x so the field of view of the lens will change significantly.

On the A7 III, you also have the option of conforming slow motion in camera with the Q&S mode, which allows you to undercrank down to 1fps.

Another big difference between the two cameras concerns with the autofocus system.

The AF of the A7 III is based on the flagship A9 and inherits the same phase detection points (693) and an optimised algorithm. It also has 425 contrast detection points, -3Ev sensitivity and a few extra settings such as AF Track Sensor that controls the reactivity of the AF in continuous mode. Phase detection makes the camera more accurate with fast moving subjects. Our experience with the A9 was excellent (in fact, we consider it the best mirrorless when it comes to AF) and we found the A7 III performance to be very close.

The A7S II only works with contrast detection and features 169 points (25 plus the nine central that are divided into 16 segments). The minimum sensitivity is one stop darker at -4Ev. In our tests, we found the camera slower than those that use Sony’s hybrid AF – even in low light – despite the better sensitivity.

The A7 III can shoot up to 10fps with continuous AF. Up to 8fps, it shows you live view with blackouts.

The A7s II is much slower. It can reach a maximum of 5fps with AF locked on the first frame, and a slower 2.5fps with AE/AF Tracking. Clearly the camera is not designed for action photography.

Both cameras feature 5-axis sensor stabilisation but the A7 III has a more advanced hardware that increases the compensation to 5.0Ev in comparison to the 4.5Ev rating of the A7S II (CIPA standards).

The LCD of the A7s II has slightly more resolution (1,228k vs 921k dots) but the A7 III’s screen is touch sensitive and can be used to move the focus point, even when composing with the viewfinder. It works during video recording and can be useful to produce smooth transitions between focus areas, especially when you tweak the AF Track Sensor and AF Drive Sens settings in the menu.

If you don’t fancy using the touch operation, the A7 III gives you another option to move the focus point: the handy joystick found on the rear.

The A7 III inherits the same improvements given to the A7R III. In addition to the aforementioned AF joystick, you also get a redesigned wheel and buttons with an improved tactile feel.

The mount is attached with six screws rather than four.

The menu system is more well-organised on the new camera, and there are more customisation options including the My Menu page where you can save up to 30 settings.

Finally, the A7 III has two memory card slots, with the first of which is UHS-II compliant. The A7S II has just the one slot (UHS-I).

A significant improvement on the A7 mark III concerns the battery life. The camera uses the NP-FZ100 introduced on the A9 and shared with the A7R III. It more than doubles the endurance in comparison to the NP-FW50 used for the A7s II.

This becomes an advantage for stills and video. The new camera can record for approximately 115 minutes (or 125 min by using the LCD screen instead of the EVF) by CIPA standards. By comparison, the A7s II can manage 55/60 minutes.

A battery grip is available for either camera and both can be charged via USB.

Sony supplies the A7s II with one charger and two batteries, whereas the A7 III comes with a single battery and no charger.

We simply can’t publish an article like this without mentioning the price, can we?

Note that these prices can vary according to country, not to mention that you’ll often come across special discounts from time to time. It is also worth remembering that you can find the A7s II second-hand more easily because of its age.

In a way, the A7 III is an interesting product for video: the camera has a faster autofocus that is reliable in movie mode as it is for stills, includes a few extra settings such as Hybrid Log Gamma and doesn’t have the annoying 2.2x crop when recording in 1080p/120fps. Dynamic range and high ISO performance are excellent. The improved battery life is another nice addition, as is the touch screen which can be very useful to produce smooth focus point transitions.

That being said, the A7s II remains a reference when it comes to low light performance, and this is why it is used worldwide for many productions, including the recent BBC Planet Earth and Blue Planet II. However we feel that the gap is not as strong as it used to be with the previous generation of A7 cameras.