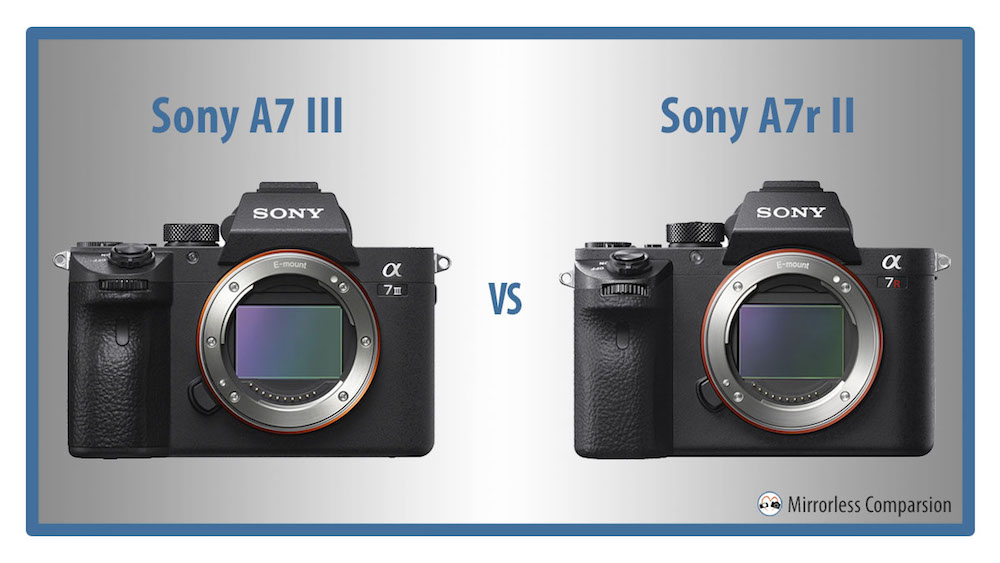 Sony has announced the second camera in its third-generation A7 series, the Sony A7 III. A mid-range model like the previous A7 II, it borrows a number of features from the two current flagships, the A9 and A7r III, making it the perfect full-frame solution for photographers on a restricted budget.

The A7r II, which was released nearly three years earlier, belongs to the second generation of A7 cameras. Having lost its flagship title to its successor, the A7r II, it is now significantly more affordable than before. Even so, it retains many desirable features, not least one of the best full-frame sensors on the market.

If you are torn between the latest mid-range model and the older flagship, you’ve come to the right place. In this article, we have laid out all the most important differences between the two cameras, from obvious topics such as the sensor resolution and autofocus algorithm, to the little details that could easily be missed without a deeper look at the specifications.

Ethics statement: The information supplied in this article is based on the official specifications found on the Sony website and our separate experience with the two E-mount cameras. We were not asked to write anything about these cameras, nor were we provided with any sort of compensation. Within the article, there are affiliate links. If you decided to buy something after clicking the link, we will receive a small commission. To know more about our ethics, you can visit our full disclosure page. Thank you!

Although both cameras use a full-frame sensor with BSI technology, the A7r II has approximately twice the number of megapixels as the A7 III (42.2MP vs 24.2MP). Despite its age, it remains one of the most highly rated full-frame chips in terms of dynamic range and resolution.

The A7 III’s sensor is newly developed and Sony promises 15 stops of dynamic range, which would put it in front of the 42MP chip which has a rating of 13.9Ev according to DXO Mark. In our comparison with the A7R III (same sensor as the A7R II), we found it to deliver the same performance.

The new camera has received some hardware and software updates as well. For example, it features a front-end LSI chip that doubles the readout speed. Coupled with the updated BIONZ X image processor, the camera processes more data at a higher speed than the A7r II.

The A7 III becomes the second camera after the A9 to feature 693 phase detection points that cover 93% of the sensor surface. It also has 425 contrast detection points, making it the model with the highest number of autofocus points of any mirrorless camera.

The A7r II has fewer points by comparison: 399 phase and 25 contrast detection points to be precise.

In addition to the extra points, the autofocus speed is faster. Eye AF and face detection have been improved and the low-light performance is extended to -3EV minimum sensitivity at f/2 versus -2EV on the A7r II.

Phase detection autofocus can operate on either camera even when an A-mount or DSLR lens is mounted via compatible adapters such as the LA-EA3. Sony claims that the performance has been improved on the third generation A7 cameras.

On the A7 III, you will also find AF in magnification mode, which is useful for macro shooting, and the AF Track Sens setting to control the responsiveness of the autofocus in continuous mode.

We found the A7 III to perform really well in the field. Its AF algorithm is based on that of the A9 and the performance is close to the flagship model. The A7r II is good too but definitely struggles more for genres involving very fast action.

The A7r II doesn’t offer very impressive burst speeds by today’s standards, with a maximum of 5fps with AE/AF tracking and no live view in the EVF or LCD screen.

The A7 III brings a great improvement in speed with a maximum of 10fps with AE/AF tracking. Up to 8fps, it is possible to have live view with blackouts.

Both cameras have mechanical, electronic first curtain and electronic shutter modes with a maximum shutter speed of 1/8000s. The A7 III has an additional anti-flicker mode which should reduce the strobing and banding effect of certain artificial lights.

Also found on the A7 III is a new shutter mechanism that promises reduced vibrations compared to the second generation models.

Unlike the A7r II, the function buttons, playback mode and menu system all remain accessible even while files are being written to the SD card.

Both the A7 III and A7r II can record in 4K up to 30fps and 100Mbps with the XAVC S codec. You can select between full-frame or Super35/APS-C mode on either camera, but the results are different as we’ll see below.

The A7 III reads out the entire width of the sensor and down-samples the information to produce sharp 4K footage without moiré and aliasing. However, it performs a slight sensor crop of 1.2x when recording at 30fps, meaning that it downsamples from 5K rather than 6K of information.

The A7r II gives you the best results in Super35 mode, where it performs full pixel readout on a smaller area (18MP). The results are much better in terms of sharpness and low light performance in comparison to the full frame mode, where the camera has to perform line skipping due to the higher resolution.

The A7 III offers a maximum frame rate of 120fps in Full HD while the A7r II can only record at this speed in HD resolution (720p).

As for the picture profiles, both have the S-Log2 gamma curve but the A7 III comes with the added bonus of S-Log3 and a new HLG (Hybrid Log-Gamma) profile. Other features you won’t find on the older model include XAVC-S Proxy and Slow & Quick motion.

Below you can see our 4K video compilation taken with the A7r II:

Both cameras feature a tilting LCD monitor but there are a couple of differences between them.

Second is the addition of touch capabilities on the A7 III, which make it possible to move the focus point while taking a shot or recording a movie, even when looking through the EVF.

The A7 III inherits a few handy features from the A9 and A7r III, one of which is the AF joystick that lets you change the autofocus point on the fly. There are also two memory card slots, one of which is UHS-II compliant.

You won’t find either of these features on the A7r II.

Other improvements include the relocation of the movie recording button beside the EVF, the addition of an AF-ON button, more customisation options and the new menu system seen on the flagships A9 and A7r III.

The A7 III uses a USB 3.1 Type C port for faster image transferring in comparison to the Micro USB 2.0 port of the A7r II. The new Sony imaging software suite improves tethering with USB and wireless options when connecting to a computer or FTP server.

Both cameras have a 3.5mm microphone input and headphone output, as well as a Micro HDMI port with 4:2:2 8-bit clean signal.

In addition to WiFi and NFC, the A7 III also has Bluetooth to record location information. Using these methods, you can connect either camera to the PlayMemories app and remotely control them. However, unlike the A7r II, the A7 III no longer supports the downloadable apps in the PlayMemories store.

To inaugurate the third generation of full-frame Alpha cameras, Sony also announced a larger, more powerful battery called the NP-FZ100. It is used by three cameras at the moment: the A9, A7r III and now the A7 III.

The A7r II uses the older NP-FW50 battery which was infamous for its poor lifespan.

To give you a rough idea, the A7 III can record around twice the number of images on a single charge (290 versus 610 shots with the EVF) and twice the amount of video (115 versus 50 min in 4K with the EVF) according to official CIPA standards.

The primary difference between the A7 and A7r series has always been the same, even if we think back to the first generation: the former offers a more well-balanced package at a lower price whereas the latter is all about the high resolution sensor.

In our opinion, Sony played its cards extremely well with the A7 III. By first showcasing its best features on the A9 and A7r III, the brand managed to provoke discussion and anticipation surrounding which of these technologies would make it onto the A7 III. And when the new model finally did arrive, it ticked every box – from the advanced AF system based on that of the A9, to the updated body, 4K video capabilities and brand new 24MP sensor.

This is why, for most photographers, the A7 III will likely be the way to go. It’s simply a more well-rounded package. The only exception is those who require lots of resolution, such as landscape or still life photographers who sell large prints. In their case, the A7r II could be the better choice.