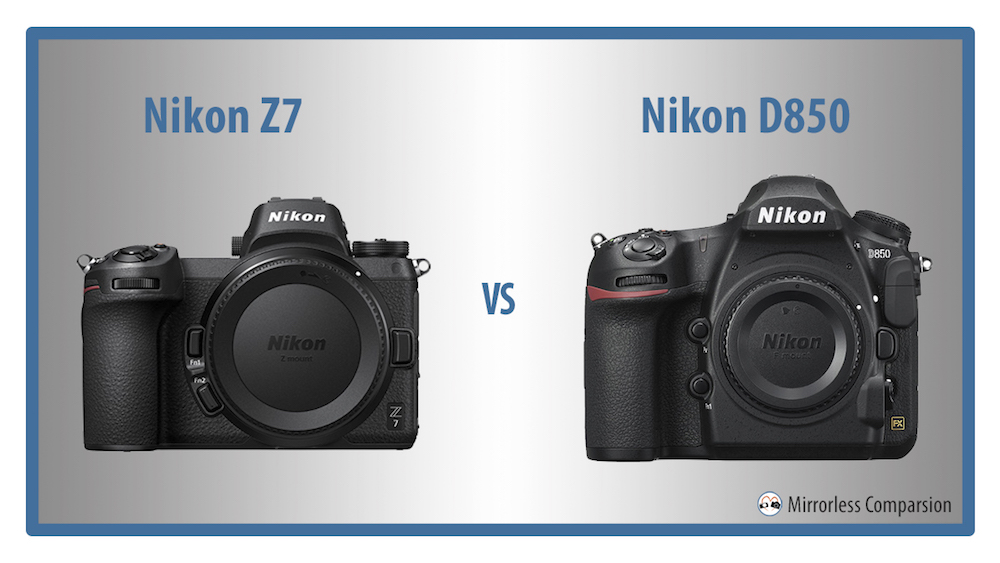 When mirrorless cameras from Sony, Fujifilm, Olympus and Panasonic first began to seriously threaten the DSLR market share a few years ago, the obvious question was how long it would take for the two heavy-hitters in the industry – Nikon and Canon – to jump onto the mirrorless bandwagon.*

Well, one of the two giants has finally made the leap by introducing two high-end mirrorless models: the Nikon Z6 and Z7. The former is a jack-of-all-trades whereas the latter, with its 45.7MP sensor, is designed to deliver the best resolution possible.

In this comparison preview, we’re going to be looking at all the ways the Nikon Z7 model compares to one of its main DSLR rivals, Nikon’s own D850. Despite housing an high-resolution back-illuminated sensor, there are multiple differences that could push you in the direction of one or the other. Let’s take a look at them now.

*Note: Nikon started its mirrorless journey seven years ago with the 1 system which uses a 1 inch sensor. It is now discontinued.

Ethics statement: The information supplied in this article is based on official specifications and our personal experience with the Nikon Z7. We were not asked to write anything about these cameras, nor were we provided with any sort of compensation. Within the article, there are affiliate links. If you decided to buy something after clicking the link, we will receive a small commission. To know more about our ethics, you can visit our full disclosure page. Thank you!

We already touched upon this first difference in the introduction but given that it is one of the main characteristics that sets the Z7 and D850 apart, it is worth briefly reiterating the differences between the two systems.

DSLRs, which is short for digital single-lens reflex cameras, have been the standard for professional photography ever since the early 2000s when digital largely replaced film and the popular SLRs. Featuring an interchangeable lens design, they use a mirror to direct the light that travels through the lens to the finder and autofocus sensor.

Mirrorless cameras feature an interchangeable lens mount just as DSLRs do, but as the name clearly suggests, they don’t feature the same elaborate internal mirror system, nor do the vast majority have an optical viewfinder. This means that it is easier for the manufacturers to make them smaller, lighter, more silent and mechanically speaking, less complex than DSLRs. Unlike DSLRs, mirrorless cameras allow light to pass directly through the lens onto the image sensor. The image is then displayed on the screen of the rear monitor and/or electronic viewfinder.

Advantages of mirrorless systems include live view through the EVF, on-chip phase detection autofocus for video recording, a larger array of AF points, and faster shutter speeds with the electronic shutter (though not on every model). DSLRs on the other hand still reign supreme when it comes to lens/accessory selection and battery life, in addition to having a viewfinder with zero lag time.

As we mentioned above, the new Z7 features a built-in electronic viewfinder whereas the D850 has a traditional optical viewfinder.

The Z7 finder has an electronic OLED panel with 3.69 million dots of resolution, 0.8x magnification, a 21mm eyepoint and 100% field of view. Our impressions are very positive: it is large, bright and very enjoyable to use. 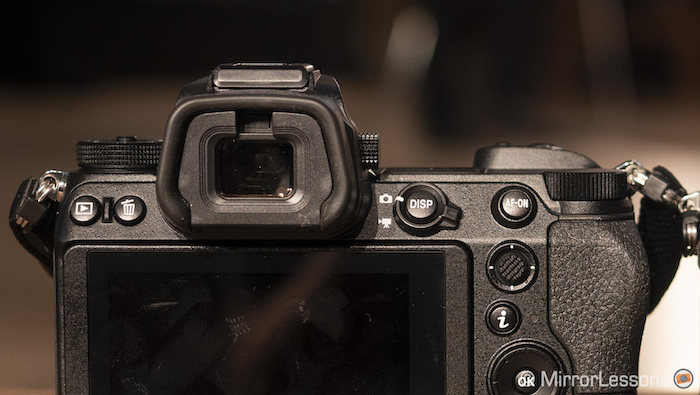 One of the most interesting features of the Z series is the larger mount. The diameter is 55mm which is quite a bit larger than the 44mm mount of the D850’s F-mount. 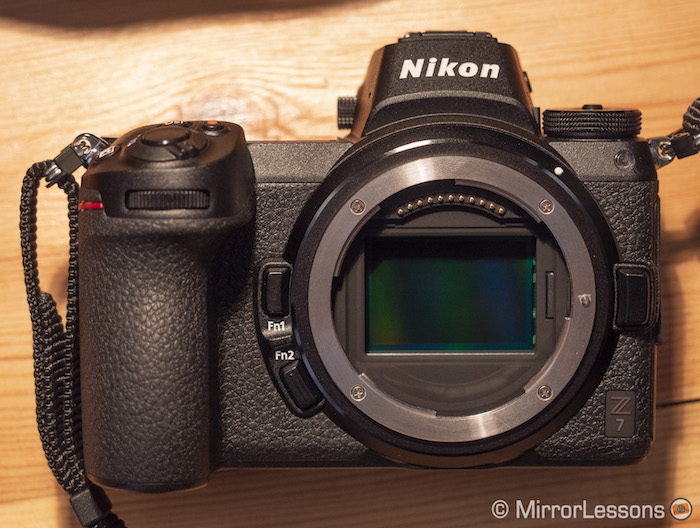 According to Nikon, the larger mount is there to accommodate high quality glass such as the upcoming f/0.95 series of lenses, the first of which will be the 58mm f/0.95 Z-Noct prime. Thanks to the close flange-to-sensor distance of just 16mm, Nikon should be able to keep the lenses relatively compact without compromising on higher performance.

In a way, you could say that Nikon is future-proofing its mirrorless range by placing such a strong emphasis on optical quality. If the upcoming Z lenses really are as good as promised, we could see many photographers embrace the Z system before long (you can check our 35mm comparison feature the Z 35mm f1.8).

Something that came as a surprise to us all was the lack of a dual memory card slot on the Z7 and its sibling the Z6. For years users campaigned for dual card slots on high-end mirrorless bodies, and now that we’ve got them, it seems strange for Nikon to ignore this key detail on their flagship mirrorless product. The single slot it does have is an XQD type (with future support for the CFexpress standard). 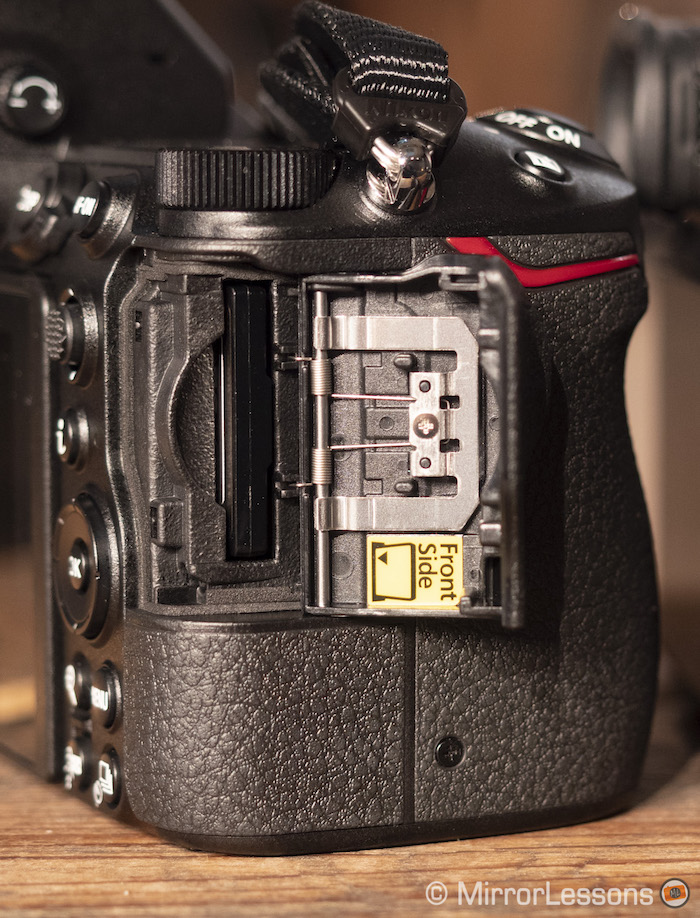 The D850 has two slots: an XQD slot and a standard SD slot that is UHS-II compliant. Either slot can be used for primary or back-up storage, or for separate storage of RAW (NEF) and JPG files. Images can also be copied between cards.

Adding to what we’ve already mentioned, there are also a number of other physical differences between the two cameras.

Most obvious are the size and weight. The D850 is built like a tank, with a magnesium alloy chassis, full weather-sealing and a bulky design. If there was one camera I’d choose to drop from a tall building and bet on its survival, this would be it!

The Z7 also has a magnesium alloy construction with full weather sealing, as well as fluorine coating on the EVF to help repel dust, but it is much lighter and more compact than its DSLR counterpart. You can see the exact differences in their measurements below:

Whereas the D850 has a number of buttons on top for various settings, the Z7 has a traditional mode dial.

The two cameras share an AF joystick to move the autofocus point, a screen on top that displays the settings in use, twin command dials, a circular control pad, a hot shoe, various buttons around the body including the I button, audio input/output ports and a Type C HDMI connector.

Only the D850 has a ten-pin remote terminal for remote control and high speed USB and micro USB connectors. The Z7 by contrast has a SuperSpeed USB connector (Type C).

A feature that has become commonplace on nearly all high-end mirrorless cameras is in-body stabilisation, usually on 5 axes. The Z7 doesn’t disappoint in this regard: it offers 5-axis stabilisation with 5 stops of compensation with native lenses, and 3 axis stabilisation with adapted lenses. It also works for video. What’s more, you can lock the sensor in place when cleaning or transporting the camera.

The stabilisation performed quite well in our test, even when put in comparison to other mirrorless systems such as the Sony E-mount series.

The D850 relies entirely on the optical stabilisation of F-mount lenses. These lenses can be identified by the VR (vibration reduction) label on the side of the barrel.

The Z7 features on-sensor phase detection with 493 points that cover approximately 90% of the sensor. It has more points than the D850 which features 153 phase detection points (including 99 cross-type sensors) of which 55 are available for selection.

The Z7 has left us with a very good impression when it comes us to autofocus speed and reactivity, and it performed well with difficult subjects such as bird in flight. We’ve never tried the D850 ourselves but most reviewers are extremely positive about its performance.

Also worth mentioning is that Nikon has developed its own FTZ adapter meant for use with the existing range of Nikkor lenses. It offers full compatibility with autofocus for 93 lenses and partial compatibility for more than 300 lenses. We were pleased to see that the level of reactivity with the lenses we tested was similar to the native Z lenses.

Both cameras can detect faces but the D850 lacks an eye detection mode. (note: Eye AF will come to the Z7 with a future firmware update)

The Z7 has a slight advantage when it comes to continuous burst shooting. It has a maximum speed of 9fps – albeit with just 12-bit RAW and no AE – whereas the D850 can only reach 9fps with the MB-D18 battery grip. Without the grip, it can go up to 7fps with AE and 14-bit RAW.

By reducing the speed to 5.5fps on the Z7, you can access live view with blackouts and 14-bit RAW.

As for the buffer, the D850 averages 51 RAW shots in a burst in FX mode (or unlimited shooting in DX crop or JPG mode) whereas the Z7’s official buffer depth is unknown. In our test, the camera slows down quickly after not even 3 seconds when shooting at 9fps (RAW and JPGs).

The video specifications of the two cameras aren’t all that different but there are a few points worth mentioning.

The Z7 offers 4:2:2 10-bit recording via HDMI and has the new N-Log super flat profile, whereas the D850 is limited to 8-bit and lacks the video-specific profile. A soon to be released firmware update will give the Z7 the possibility to record Prores RAW to an external recorder such as the Atomos Ninja V.

While the Z7 allows for focus peaking for video in 4K and Full HD, it is only possible to use it in Full HD on the D850.

Both cameras allow you to film 4K time-lapses in camera.

Most DSLRs generally offer a long lasting battery life and the D850 is no exception. It has a CIPA rating of 1840, although you should be able to achieve more than that out in the field.

The Z7 by comparison has a rating of 330 shots per charge, which is the result of power-hungry features such as in-body stabilisation, EVF and live view eating through the battery life more rapidly. In our test, the camera proved to be less power-hungry that what these specs suggest but it doesn’t go near the capabilities of Nikon’s DSLR.

The Z7 and D850 are equally-matched flagships cameras within the Nikon range that have been designed for two different kinds of users.

The D850 is ideal for those seeking a reliable and rugged body that will never let them down in the field regardless of the conditions. It’s weather-sealed construction is top-notch, it has an excellent battery life even without a battery grip, the OVF is large and bright, and it doesn’t require an adapter to use Nikon’s wide selection of lenses.

The Z7 on the other hand is an exciting step into uncharted territory for Nikon. It includes many of the innovative technologies already seen on other mirrorless cameras including a bright high resolution EVF, in-body stabilisation on 5 axes and 4K/30p recording, as well as one of the largest mounts ever seen on an interchangeable lens body. But perhaps the most exciting thing about this camera, and the Z series in general, is what it promises in terms of the future of optics. If the f/0.95 series of lenses really is as sharp as Nikon claims, many users who require fast apertures for their work, such as portrait or wedding photographers, may decide to transition over from their current system in the future.

Check price of the Nikon Z7 on

Check price of the Nikon D850 on