You are here: Home / Preview / The 10 Main Differences Between the Fujifilm X-E3 and X100F 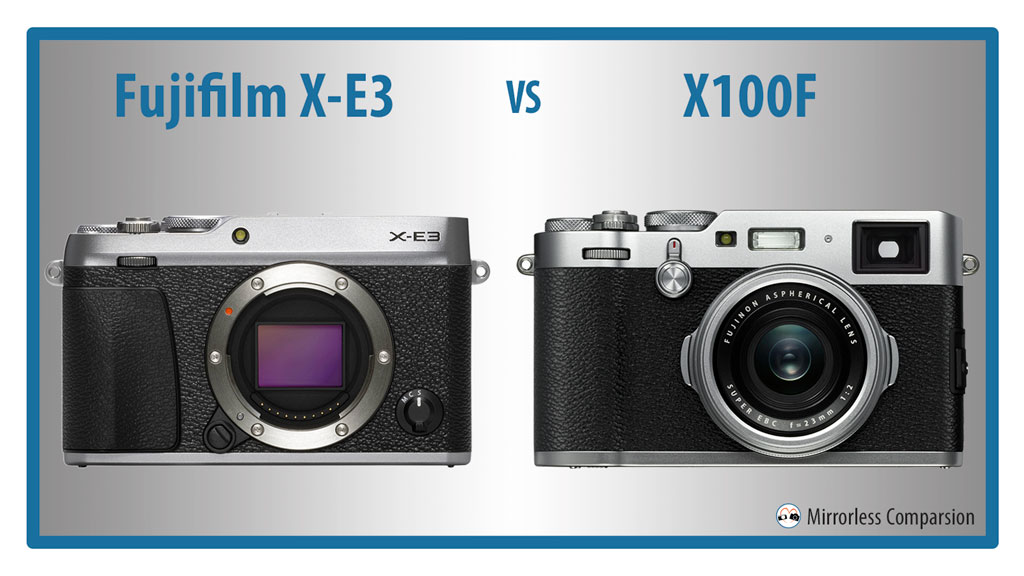 The X-E3, being the latest camera to join Fujifilm’s family of third-generation X-series cameras, shares many key components with other recent models from the brand but perhaps the least obvious point of comparison is the X100F. The two cameras share a similar rangefinder philosophy, the same 24MP sensor and the same image processor but differ in many other ways starting with the lens system and viewfinder technology.

The truth is that you could be quite satisfied owning both cameras since the X100 series serves as the perfect sidekick to the interchangeable lens system. But if you are thinking about using the X-E3 with only a few primes and your favourite field of view is close to the classic 35mm lens (full frame equivalent), then you may be curious to understand how the two products differ. Let’s begin, shall we?

Ethics statement: The information supplied in this article is based on official specifications and our personal experience with the Fujifilm X-Series. If we get the chance to test the two cameras side-by-side, we will publish a full comparison. We were not asked to write anything about these cameras, nor were we provided with any sort of compensation. Within the article, there are affiliate links. If you decided to buy something after clicking the link, we will receive a small commission. To know more about our ethics, you can visit our full disclosure page. Thank you!

Let’s start by looking at the lens system: the X-E3 is an interchangeable-lens camera, meaning you can mount it with the entire range of Fujinon XF lenses and some third party products or adapt lenses from other systems such as old SLR lenses thanks to the short flange of the X-mount, an advantage shared by all mirrorless cameras. Some lenses are small and compact like the f/2 prime series and options like the 27mm pancake make the camera as compact – if not more compact – than the X100F, but faster primes or zooms will do the opposite. 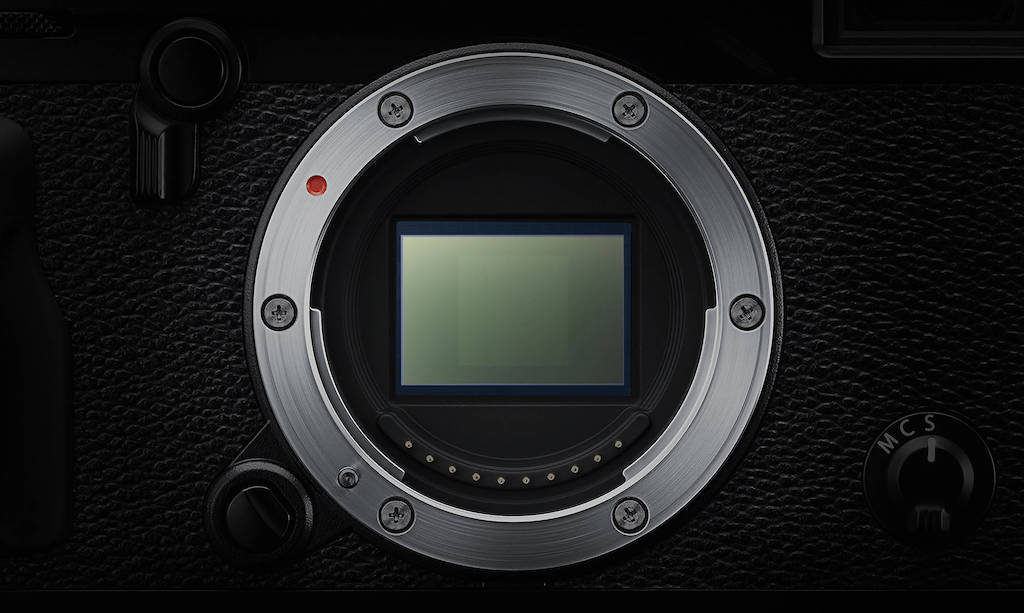 The X100F is a fixed-lens camera meaning that its 23mm f/2 prime is directly built into the camera and thus cannot be removed. Having only one focal length may sound limiting but you’d be surprised at how versatile this camera can be thanks to the equivalent 35mm field of view. Granted, you won’t be able to catch subjects at a distance or emphasise the geometry of a building as you can with super wide-angle lenses, but for many genres including reportage, street and travel, it can be a great companion. Two converters are available as well, one wide that gives you a 28mm equivalent field of view, and a tele converter that gives you a 50mm equivalent angle of view.

The optical quality of the X100F is excellent with sharp results across the frame from f/2. The bokeh is pleasant, though not outstanding, and flare resistance is good too. The only weak point is sharpness at the closest focus distance, where you need to close down to f/4 for decent results. If you are curious to see how it compares to the XF 23mm f/2 prime that you can mount onto the X-E3, you can check out our comparison here. 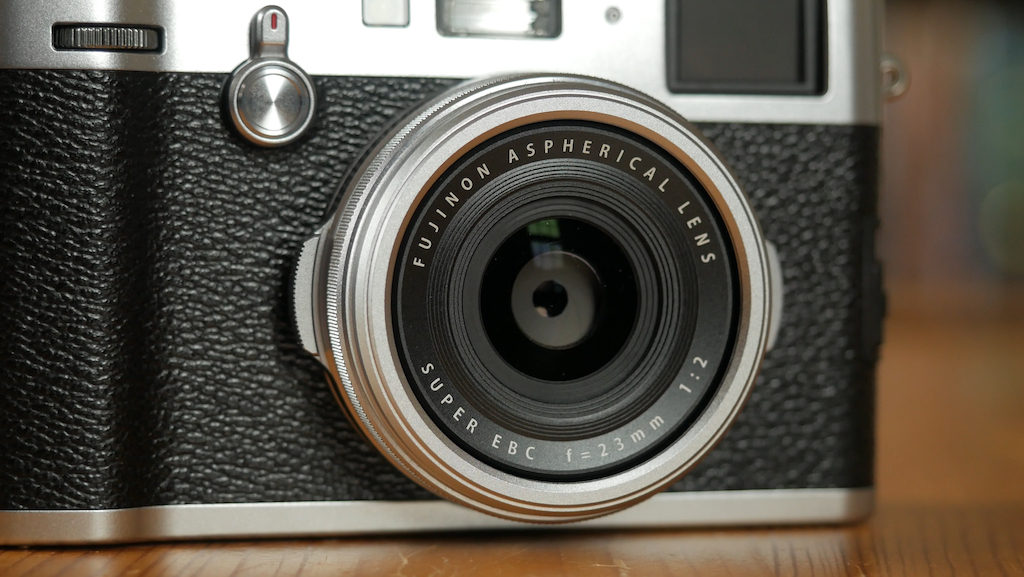 The X-E3 body is slightly smaller and lighter than that of the X100F but of course the overall weight and size will depend on the lens you mount. Neither camera is weather sealed but the X100F benefits from a magnesium alloy construction, while the X-E3 uses the same material for the top and bottom plates only. Each is available in black or silver.

The two products distinguish themselves with their timeless retro design that has been a characteristic of the X series since the beginning. The X100F is definitely the one that resembles a classic rangefinder camera the most thanks to its optical viewfinder. I’ve used many versions of the X100 series over the years and more than once someone asked me on the street if I was using a Leica camera!

The retro style of the two cameras is enhanced by the exposure dials. The X100F features the same twin ISO/shutter speed dial seen on the X-Pro2 (you turn it to change the exposure duration, you lift and turn it to change the ISO). The X-E3 has a dedicated shutter speed dial and you can find an exposure compensation dial on both. The X100F has an aperture ring on the lens and this characteristic is found on many XF lenses as well.

On the rear you can see an autofocus joystick on both products. Curiously Fujifilm decided to get rid of the 4-way directional pad that is found on the X100F and all other interchangeable X series cameras. This means that the fixed lens camera has more physical function buttons but you can recover the 4-way pad on the X-E3 with special touch screen functionalities (more on this below).

One of the features that could push you towards the X100F is the hybrid viewfinder, a feature the camera shares with the flagship X-Pro series (comparison here). You can choose to use an optical or electronic finder simply by toggling the front lever. The latter also allows you to use the ERF (Electronic Rangefinder), a small electronic screen that appears at the bottom right corner of the optical VF to help you fine-tune your focus point, amongst other things. 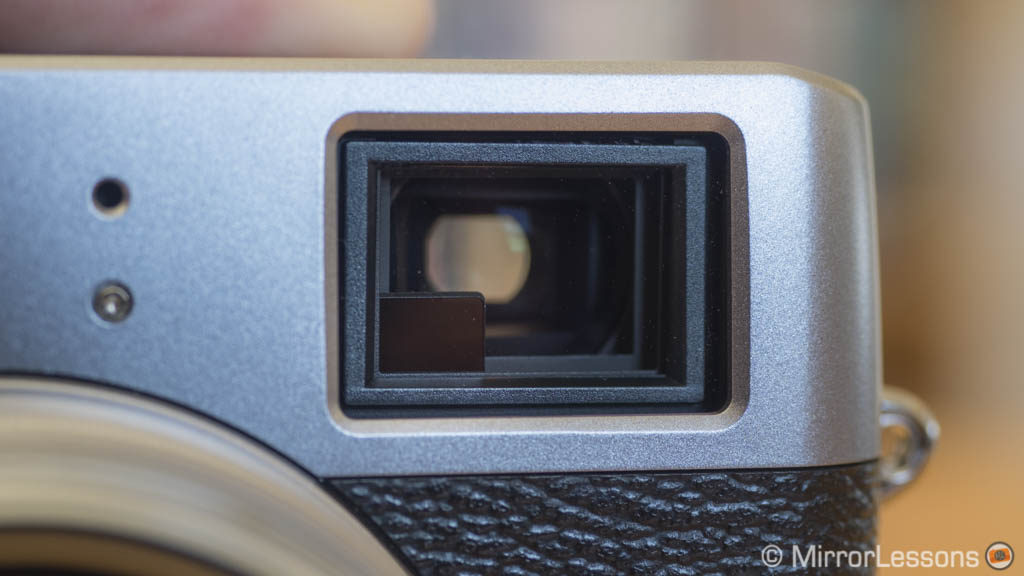 The optical part is a Reverse Galilean type with 92% field coverage and 0.5x magnification. The electronic bright frame as well as the real time parallax correction help you with the composition and focus.

The two cameras have a fixed 3-inch rear monitor with the same resolution of 1.04 million dots, but on the X-E3 you can take advantage of touch sensitivity.

You can use the screen to move the focus point (even when composing with the EVF), focus, take a shot and select four different functions by swiping your finger up, down, left or right. You can choose which function to activate in the menu just as you would with a Fn button.

The X-E3 can record video in Ultra HD 4K at 24, 25 and 30fps with an average bitrate of 100Mbps. It does so without cropping the sensor meaning that it applies line skipping just like the X-T20. For this reason, the results are not as sharp as those from the X-T2.

In 1080p, the camera can record up to 60fps just like the X100F. The latter, despite sharing the same sensor and image processor, doesn’t have 4K capabilities.

The two cameras have the same autofocus system with 91 or 325 points and the same AF area options, as well as most other related settings. The X-E3 keeps two things for itself though.

The first is the new AF algorithm that makes the cameras capable of tracking subjects that are twice as fast and twice as small in comparison to the X100F. The second is the AF-C Custom Settings that allow you to change the AF reactivity and speed depending on the behaviour of the subject being photographed.

Another point worth mentioning is that the built-in lens of the X100F doesn’t have a very fast AF motor. Personally I find it to be the only weak point of the camera in terms of its autofocus performance. The main reason for this is that Fuji hasn’t changed the lens design since the original X100 that was introduced in 2011. With the X-E3 however, you can take advantage of recent lenses that have a faster and quieter internal mechanism, including many primes like the 23mm f/2.

The X-E3 has a standard focal plane shutter that moves up and down in front of the sensor. You can achieve speeds as fast as 1/8000s or as slow as 15 minutes with the T mode.

The X100F has a leaf shutter mechanism which opens and closes via a series of overlapping metal blades. It is quieter and allows you to sync with flash at any speed, the maximum being 1/4000s. One limitation concerns the fastest apertures of the lens (f/2 and f/2.8): at the fastest shutter speeds, the shutter can’t cover the large aperture fast enough which results in an unpleasant blurred background. Thankfully the camera has a built-in ND filter to bypass the problem. 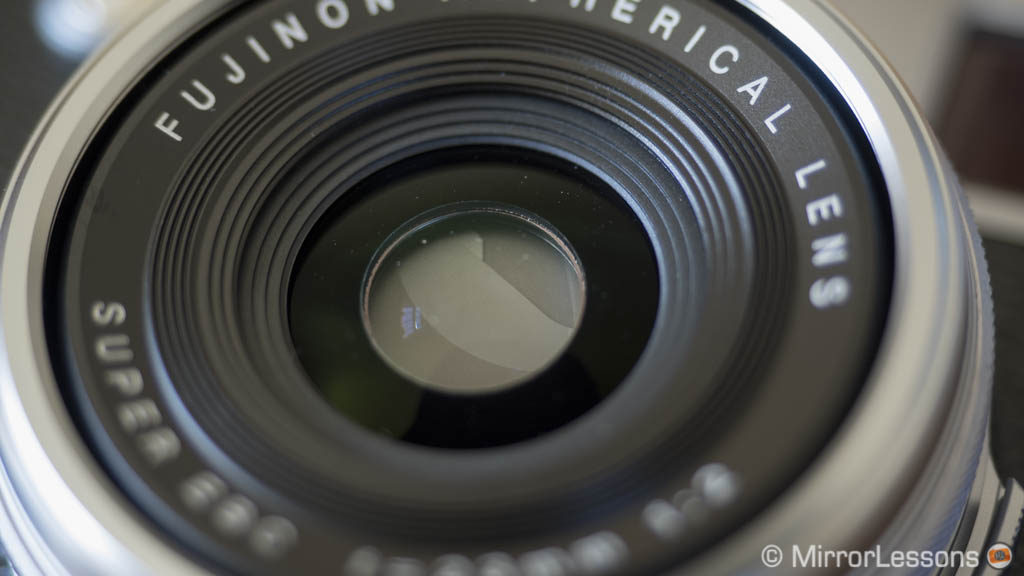 Both cameras have an electronic shutter option that increases the shutter speed to 1/32,000s and allows you to shoot in complete silence. On the X100F, it’s an alternative to the ND filter solution when shooting wide open at fast speeds.

As mentioned above, the X100F can sync at any speed while the X-E3 stops at 1/180s. However it is compatible with the latest Fujifilm flashes that allow for the use of HSS.

Both products have Wifi to remotely control the cameras or transfer images to a mobile device via the proprietary app. The X-E3 has an additional protocol, Bluetooth, which can maintain a constant connection between the camera and the phone and automatically transfer images when the app is open.

If I personally had to choose one camera in the Fujifilm X range, it would be one of the X100 series models – and the X100F is the best iteration yet. It can easily become an inseparable companion if you like the idea of working with one focal length. Not everything is perfect but it has a charm of its own that is difficult to find on other cameras in this price range.

With the X-E3, you get the latest technology and the versatility of changing lenses, which isn’t something to underestimate, especially if you want to try out different genres and take advantage of the excellent XF lens line-up.

Last but not least, there is always the option of buying both cameras, and if you choose your lens arsenal carefully, you may even be able to fit the X100F inside the same bag as as a second body.

Check price of the Fujifilm X100F on

You may also be interested in the following articles: