If we exclude the X-E2s, it took Fujifilm close to four years to provide the X-E series with a relevant update. Why exclude the X-E2s from this equation, you might ask? Well, simply because the “s” version brought nothing more than a slightly re-designed front grip and an Auto mode.

The X-E3 feels like a true successor by comparison. It incorporates the latest technology found on the X-Pro2, X-T2 and X-T20 including the advanced hybrid autofocus system, the 3rd generation X-Trans sensor and 4K video among other things. Fujifilm even decided to include some minor features that are yet to be seen on other X-series models.

So if are you wondering how the X-E3 and its predecessor(s) compare, you’ve come to the right place! Here are the ten main differences between these two (three) Fujifilm mirrorless cameras!

Note: to improve the readability of this article, I refer to the two previous cameras under the umbrella term “X-E2” unless a difference specific to the X-E2s arises.

Ethics statement: The information supplied in this article is based on official specifications and our personal experience with Fujifilm cameras. If we get the chance to test the two cameras side-by-side, we will publish a full comparison. We were not asked to write anything about these cameras, nor were we provided with any sort of compensation. Within the article, there are affiliate links. If you decided to buy something after clicking the link, we will receive a small commission. To know more about our ethics, you can visit our full disclosure page. Thank you!

The X-E3 is the fourth Fujifilm camera to inherit the “not so brand new anymore” X-Trans III APS-C sensor. In comparison to the sensor of the X-E2, it has more resolution (24MP versus 16MP), and a larger native sensitivity range of 200 to 12800 ISO whereas the X-E2 stops at 6400 ISO. There are more extended pull options for the new camera (ISO 100/125/160) while the push values are the same (up to ISO 51200). Furthermore, the entire ISO range including the extended values are available in RAW and JPG, unlike the X-E2 where RAW stops at ISO 6400. 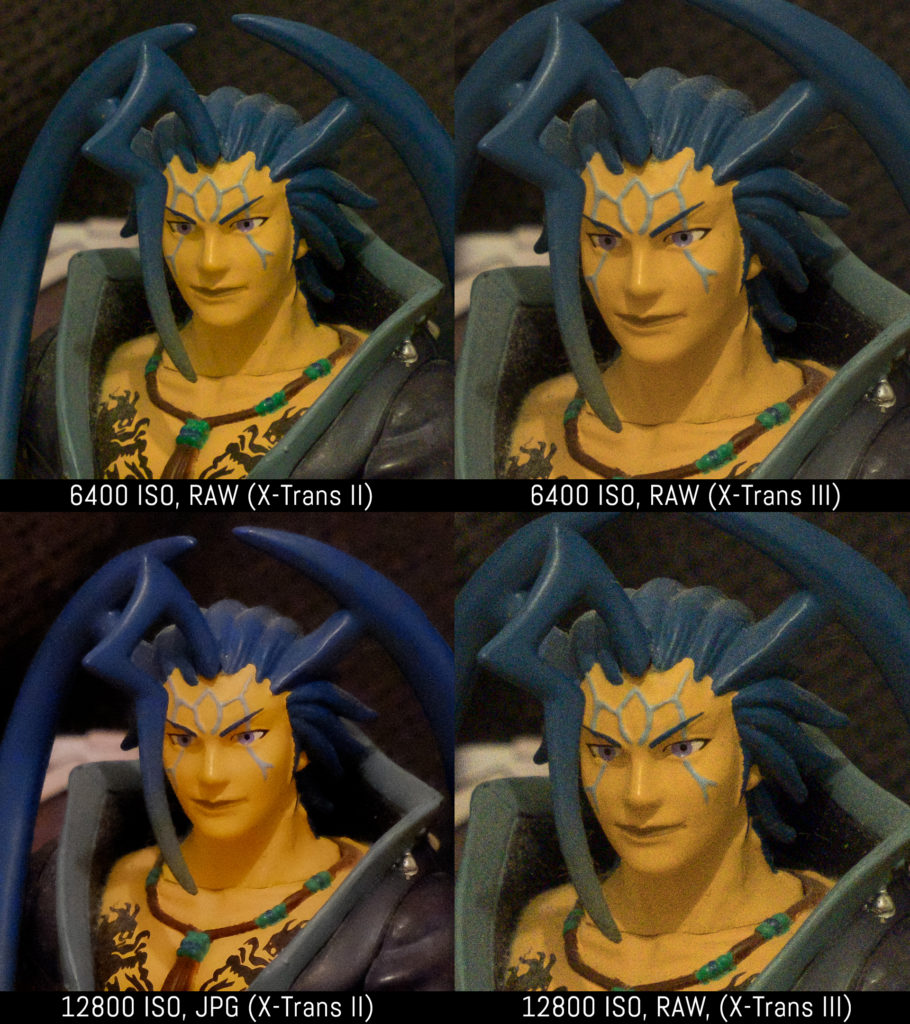 The improvements in image quality also affect the dynamic range – particularly highlight recovery – but the difference is often negligible. The X-E3 features the more recent X-Processor Pro engine and inherits the latest Film Simulation Mode: the black and white ACROS profile that provides more contrast in comparison to the standard monochrome style.

A similar trend applies to the autofocus system. The X-E3 features the same areas as the flagship cameras with 91 hybrid points. 49 of these are phase detection and the rest are contrast detection areas. These points can be subdivided into a 325 grid (13 x25) in certain focus modes.

The X-E2 features Fujifilm’s old system with 49 points, 9 of which are phase detection. Depending on the settings, these areas can be subdivided into a 7×11 grid for more accurate focusing.

The AF area modes are more flexible on the X-E3 with a choice of single point (six sizes available), Zone AF with three different options (3×3, 5×5 or 7×7 grids), Wide Tracking and ALL (change the area modes by rotating the rear command dial). On the X-E2 the single points has 5 sizes. Zone AF works on a 5×5 grid but when using continuous AF and the high burst mode, you are limited to a 3×5 area.

Face and Eye detection is found on both cameras. It works with the phase detection sensors for more accurate results on the X-E3 while the X-E2 only uses contrast detection. On the new camera you will also find the AF-C Custom Settings: 5 sets are available depending on the type of subject you are tracking.

Having tested and compared the new and old autofocus systems for my in-depth X-T1 and X-T2 comparison (visit the article here), I can already say that the X-E3 will provide more versatility and accuracy thanks to the higher number of points and area modes. Furthermore, the AF algorithm is the most advanced to date which means that the gap could be even more relevant. That being said, the old system of the X-E2 is not bad, especially if you mount the most recent lenses from the brand that feature a fast inner focus mechanism.

Thanks to the faster processing speed, the X-E3 gains better continuous shooting speeds and buffer capabilities. It can record up to 8fps with the mechanical shutter or up to 14fps with the electronic shutter. In both cases, Continuous AF is available. If you choose the Low mode, the speed goes down to 5fps but you get live view with blackouts.

The X-E2 can record up to 7fps in High mode and 3fps in Low mode. The buffer capabilities are also inferior (18 vs 62 JPGs in a burst).

Both cameras feature an electronic shutter option with a silent mode and an increased shutter speed of up to 1/32000s (the default is 1/4000s on both). The faster sensor readout of the X-E3 should ensure less rolling shutter than its predecessor.

Another nice improvement on the X-E3 is the possibility to shoot up to 15 minutes with the T mode instead of Bulb where you have to keep pressing the shutter button until the exposure is done.

Following the X-T2 and X-T20, the X-E3 becomes the third 4K capable camera in the Fujifilm family. It can record up to 30fps with an average bitrate of 100mbps. The process is the same as that of the X-T20: the camera doesn’t crop the sensor but does line skipping. The quality at 1080p is improved as well but the maximum frame rate of 60fps remains unchanged.

The X-E2, being part of the old generation, has less quality with more aliasing and moiré and a maximum resolution of 1080p.

There are fewer settings and options available on the previous camera. The minimum ISO for the X-E2 in video mode is 400 while the X-E3 can use the entire native sensitivity range. The new camera also allows you to control highlights/shadows and has a dedicated video mode accessible from the Drive button.

The recording limitations haven’t changed unfortunately. It’s a maximum of 14 minutes for 1080p or 10 minutes for the X-E3 when recording 4K.

Neither camera has a tilting LCD screen but on the X-E3, there is the welcome addition of touch sensitivity. You can use it to take a picture, move the focus point or swipe through your images in playback mode. A new option called Touch Function allows you to recall presets by swiping in four different directions, which is a virtual substitute for the physical 4-way pad. You can also move the focus point while composing with the EVF and choose if you want touch sensitivity across the entire screen or just on the left or right side. 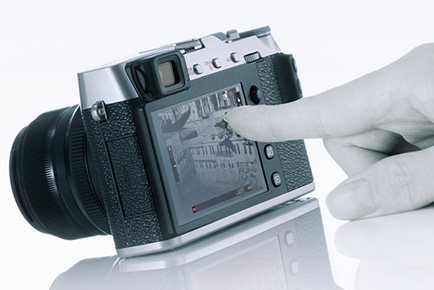 Fujifilm likes to design small and compact cameras. Even with all the technical improvements, the X-E3 is smaller than its predecessor by almost 8mm (width) and becomes the most compact interchangeable lens camera with a viewfinder from the brand. It gains something in depth, however, due to the grip (plus 5mm).

The X-E3 weighs just a little less than the X-E2 (350g vs 337g including the battery and memory card). Another change is the re-profiled handgrip which is now a little deeper and features a simpler shape.

Both cameras lack weather sealing which is a shame given that many X series lenses are fully weather resistant. The top and bottom plates are made of magnesium alloy and the top dials are metallic.

There are some interesting updates concerning the button and dial layout of the new camera, especially on the rear where we see the welcome addition of an AF Joystick but surprisingly the omission of the classic 4-way directional pad. The touch screen can be used to activate functions while the joystick has taken over the menu navigation.

There aren’t any buttons to the left of the rear screen anymore and a few other buttons have been re-positioned.

On top we find an Auto Mode lever that replaces the Auto button on the X-E2s, and the additional “C” step on the exposure compensation dial to raise compensation up to ±5 stops. On the front there is a second command dial on the new camera.

Unsurprisingly the X-E3 also received the new menu system found on all third-generation Fujifilm cameras, which is more well-organised and includes the useful My Menu page. There is a new setting in the screen set-up that allows you to activate a highlight warning in live view mode.

Fujifilm removed the built-in flash from the new model but the small EF-X8 unit is provided in the box along with the camera. It is the same one provided with the X-T1 and X-T2.

Both cameras have a maximum sync speed of 1/180s. The X-E3 is fully compatible with Fujifilm’s updated flash system and recent products such as the EF-X500 including wireless capabilities and high speed sync. On the X-E2, some of the functions are not available.

If you enjoy connecting your camera to your iOS or Android mobile device to transfer, share or edit your images, you’ll be happy to know that the X-E3 is the first Fujifilm camera to feature a Bluetooth option in addition to WiFi. It can be used to transfer images automatically without consuming as much battery power as with WiFi. The X-E2, by contrast, only has a WiFi option. 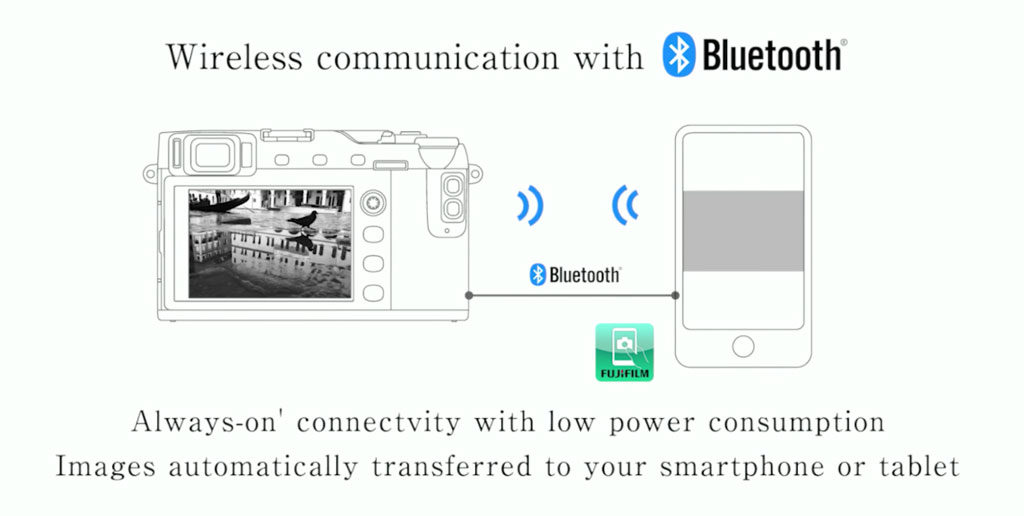 As we’ve seen throughout this article, nearly every aspect of the X-E3 has been reimagined from the bottom up in comparison to the X-E2/s. In addition to the new sensor and autofocus system, the new camera boasts improved video specifications, increased continuous shooting speed and remapped button layout, not to mention a touch sensitive screen and Bluetooth connectivity.

It is obviously a relevant upgrade which makes perfect sense given the age gap between the two cameras. The only reason you shouldn’t consider the new X-E3 – the cost aside of course – is if you are completely satisfied with every aspect of your X-E2/X-E2s. After all its 16MP sensor is still capable of producing excellent results and so is its autofocus system. Saving money by skipping the latest model can allow you to turn your attention to lenses, which are often a more essential part of the image making process anyway.

If you are considering your first Fujifilm camera, however, and want the best technology the company has to offer, then the X-E3 is certainly a serious contender but keep in mind that it’s not the only mid-range model that might appeal to you. The X-T20 is also an attractive choice (check out our comparison preview) and it comes at a very similar price.

Check the price of the Fujifilm X-E2s on

Check the price of the Fujifilm X-E2 on