You are here: Home / Preview / The 10 Main Differences Between the Fujifilm X-E3 and X-T2 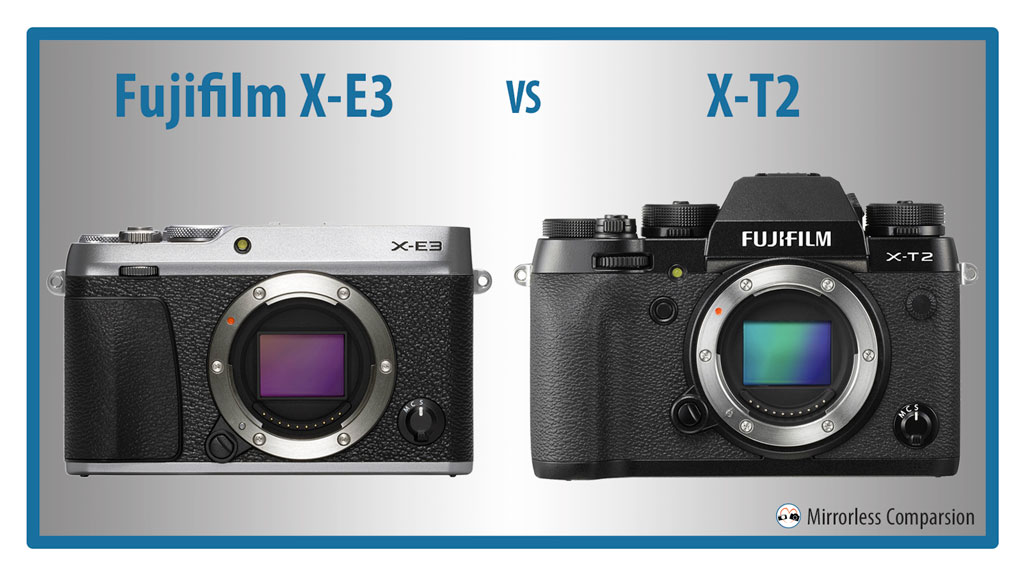 The X-E3 is the latest addition to Fujifilm’s popular APS-C range of mirrorless cameras and inherits all the latest technology the brand introduced with the flagship X-Pro2 and X-T2 back in 2016. More specifically they share the same:

Given the price gap however, there are of course some important differences to point out.

The X-E3 is a camera designed with enthusiasts and amateurs in mind while the X-T2 is a flagship model with many features professional photographers can enjoy. Let’s have a look at the ten main differences between the two X series cameras now.

Note: the X-E3 has an updated AF algorithm that allows the camera to track a subject that is twice as fast and twice as small. This software improvement will come to the X-T2 with the next scheduled firmware release (version 3.0 coming late November).

The obvious “SLR versus rangefinder” difference aside, it’s the build quality that really sets these two cameras apart. The X-T2 is completely weather-sealed against dust and moisture and is freeze proof down to -10°C. Its entire body is made of tough magnesium alloy whereas the X-E3 only has top and bottom magnesium plates.

The advantage of the X-E3 is certainly the smaller and lighter body. Actually it is the most compact interchangeable lens Fuji X series camera with a viewfinder. The X-T2 on the other hand has a more prominent grip out front which helps when using larger lenses.

The X-E3 is available in black and silver while the X-T2 can be found in black or Graphite Silver which is more expensive.

The larger and more professional body of the X-T2 gives you more control as well. On top we immediately notice a dedicated ISO dial. Both ISO and shutter dials have a lock/unlock button and a sub-dial beneath to control Drive and Metering modes.

On the rear both cameras feature an AF Joystick while the 4-way directional buttons are no longer present on the X-E3. They have instead been replaced with touch gestures on the screen (more on this later). The X-T2 also has an additional Fn button on the front.

A feature professional photographers often rely on is a dual SD card slot and the X-T2 won’t let you down in this regard: you can use two UHS-II cards and have different options to back up and separate JPGs/RAW files/ video files or duplicate the pictures you save. The faster writing speed of UHS-II cards also allows the camera to have a better buffer. 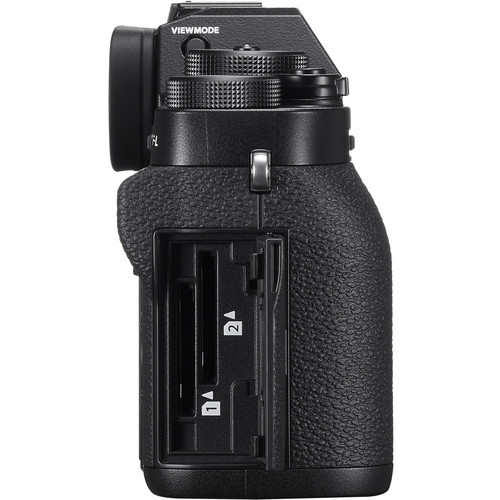 The X-E3 comes with one slot and it supports the UHS-I standard. The access point is also different as the card slot is inside the battery compartment while the X-T2 has its own separate compartment on the side.

The X-T2 features a larger 0.5-inch OLED viewfinder with 2360k dots of resolution, a 23mm eyepoint, 0.77x magnification and a refresh rate of 100fps in Boost mode. The larger size allows for additional manual focus assist options such as Dual View.

The X-E3 has a smaller EVF (0.39in) with the same resolution but a shorter eye point and less magnification (17.5mm and 0.62x respectively) as well as a slower frame rate of approximately 55fps.

The X-E3 sports a fixed touch sensitive screen. Even without articulation, the touchscreen remains useful as it allows you to move the focus point (even when composing with the EVF), take a shot, look at your images in playback mode, use the Q menu and recall functions just as you would with a traditional 4-way physical pad.

The X-T2 lacks touch sensitivity but its rear monitor has a unique 3-way tilting mechanism that allows you to rotate it up when composing in vertical mode. 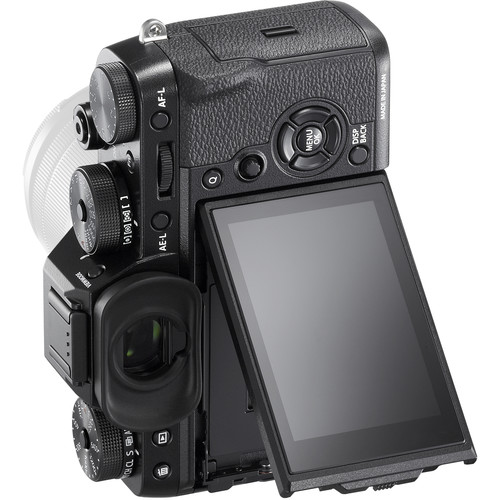 Both cameras record 4K video up to 30fps and 100mbps but the process is different. The X-E3 doesn’t crop the sensor so you maintain the original field of view of your lens. As a result, it doesn’t perform full pixel readout so detail rendering is inferior and the noise at high ISOs is accentuated.

The X-T2 on the other hand slightly crops the sensor which allows the camera to use all the pixels and render better sharpness and low light performance. You can see a direct example by watching our X-T2 vs X-T20 comparison video below since the X-E3 and X-T20 share the exact same 4K capabilities.

The 1080p quality is much more similar but the X-T2 has more settings including an optional F-Log gamma profile available via the HDMI output and a 3.5mm standard microphone input (the X-E3 has a 2.5mm socket).

The X-T2 comes with pro features such as USB and Wifi Tethering. The fastest USB 3.0 port is ideal to transfer RAW images while shooting. You need a Lightroom plugin or the Fujifilm X Acquire software in order for it to work.

Then we have the new Fujifilm X RAW Studio software: once the camera is connected via USB, you can develop your RAW images by using the camera’s image processor rather than your computer’s CPU. Batch processing will be supported as well. It will be interesting to see if the software can handle detail rendering better than Adobe’s programs, as well as how it will compare to more capable software such as Iridient Developer. As of now the X-E3 is not compatible despite sharing the same X Processor Pro engine.

A first for a Fujifilm camera, the X-E3 can transfer images automatically via Bluetooth to reduce power consumption. It works with mobile devices only (Android and iOS) and the dedicated app. Once the two devices are paired, the connection will remain active.

Both cameras offer remote control and the ability to transfer images with the regular WiFi connection.

The optional battery grip for the Fujifilm X-T2 is an interesting accessory for different reasons. Obviously it extends the battery life due to the presence of two additional NP-W126s batteries but it also boosts the continuous shooting speed with the mechanical shutter up to 11fps and extends 4K recording time up to 30 minutes. It can be used as a dual battery charger too. As of now, there isn’t a battery grip for the X-E3. 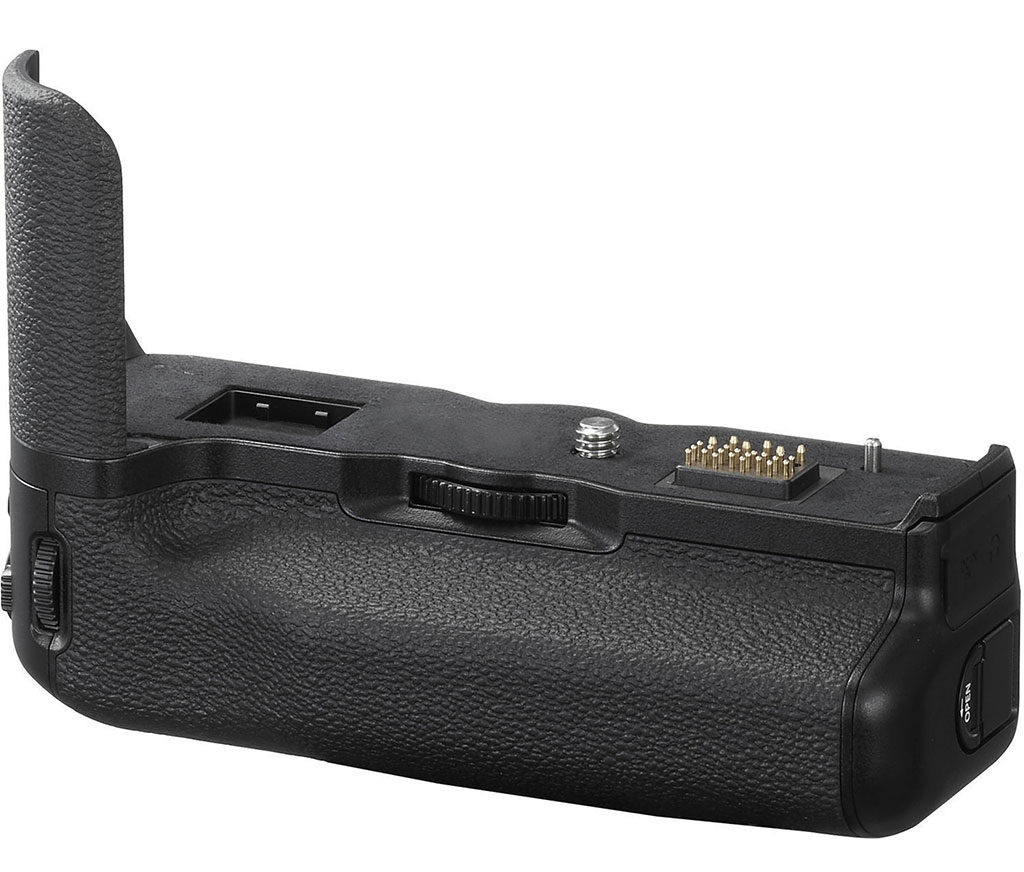 The Fujifilm X-T2 is certainly the more advanced camera of the two if we consider the weather-sealed body, the larger viewfinder, the dual SD card slot, additional features such as tethering and better video quality in 4K. The optional battery grip can be a big plus for extensive shooting as well.

That said, because the sensor and autofocus are the same as the X-T2, the X-E3 is anything but inferior as far as image quality and overall performance are concerned. The compact nature of the camera could be a decisive factor for many and the touchscreen is a nice addition that didn’t make its way onto the flagship camera.

In short, unless you have professional needs, it is probably best to listen to your wallet and go with the X-E3 since it is $700 less expensive. As for the X-T2, it is a worthwhile investment for someone who takes photography very seriously or works as a professional.