The X-T20 is an extremely popular camera, not least because it provides the best Fujifilm has to offer in terms of image quality and autofocus performance at an attractive price. Now there is a second Fujifilm camera that can fit into this category: the brand new X-E3.

Update: our X-E3 vs X-T20 full comparison is now online.

The two cameras are more or less identical twins when it comes to their technology:

The debate can easily be settled by focusing on the design, the position of the viewfinder and the characteristics of the rear LCD screen. But is there anything else worth mentioning? Let’s find out!

The first and perhaps most important difference between these two cameras is their design and the positioning of the electronic viewfinder. The X-E3 has the flat top of a rangefinder, while the X-T20 is slightly larger and definitely taller because of the EVF hump. They are similar in terms of weight, though we could nitpick by pointing out that the X-E3 is approximately 50g lighter.

There are a few differences concerning the dial and button layout. The most relevant is the lack of a physical D-Pad on the rear of the X-E3. It has been replaced by an AF joystick which is missing on the X-T20.

The X-T20 has a drive dial on top to select the different shooting modes while on the X-E3 you can access the same options with the dedicated button on the rear.

Both cameras use the same menu system, Q menu and My Menu. On the X-E3 there is a new option called Live View Highlight Alert. Once enabled in the screen set-up, it will warn you of any highlight clipping in the EVF or LCD screen.

Another difference that often triggers heated debates on forums is the rear monitor. Fujifilm has opted to keep the fixed monitor on its rangefinder series while on the X-T20, you can tilt it up and down. 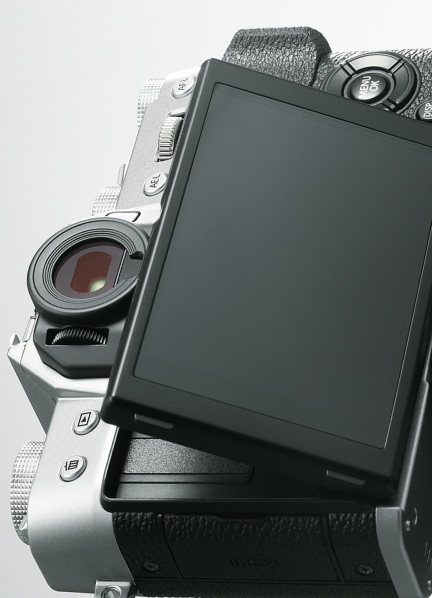 Both monitors share the same resolution and are touch sensitive.

There are lots of things you can do with the touchscreens of the two cameras such as move the focus point, take a picture or browse through your images in playback mode.

However the X-E3 is the only one to benefit from a new mode called “Touch Function”. It allows you to activate up to four different settings by swiping left, right, up or down and can be considered a virtual replacement for the D-Pad. You can also move the focus point with the touchscreen while composing with the EVF and choose which area of the touch screen you want to be sensitive (left, right or all). You can also use touch sensitivity with the Q Menu.

The X-T20 won’t remain inferior to its mid-range sibling for long. Fujifilm will release a firmware update for the camera in late November (version 2.0) that will allow you to use the screen while framing with the viewfinder as well. As for the Touch Function, it will likely remain exclusive to the X-E3 for now.

Here we have a minor difference concerning the image quality settings: on the X-E3 you have three different values – 100, 125 and 160 ISO – for the extended “low” sensitivity option, whereas on the X-T20 you can only choose ISO 100.

While both cameras share most of the same options including the AF-C Custom settings, the X-E3 gains an additional feature called “Store AF by Orientation”: it will store different positions for the focus area depending on the orientation of the camera (horizontal or vertical). With the single point, you can choose between six different sizes on the X-E3 and five on the X-T20. The new camera has an ALL setting where you can switch between the different area modes by rotating the rear command dial.

Another interesting upgrade on the X-E3 concerns the autofocus algorithm: according to the official press release, it can track moving subjects that twice as fast and half the size in comparison to previous models with X-Trans III and X-Processor Pro technology. Perhaps a future firmware update will implement this improvement on the X-T20 as well (it’s already planned for the X-T2 and X-Pro2).

The X-E3 can shoot as long as 15 minutes with the T mode while the X-T20 can’t go for more than 30 seconds unless you use the classic Bulb mode. The advantage of the T mode is that you don’t need to keep your finger on the shutter button until the exposure is complete.

If the X-T20 can shoot a maximum of 3 shots and ±2Ev, the X-E3 can record up to 9 frames at ±3Ev, giving you more flexibility for your HDR workflow.

The X-E3 loses the built-in flash of its predecessor but the small EF-X8 is provided in the box, which gives you a little more power in comparison to the built-in one of the X-T20.

Both cameras share a maximum sync speed of 1/180s and are fully compatible with the latest flash products and options such as the EF-X500 unit, HSS and wireless capabilities.

New and as of now exclusive to the X-E3 is Bluetooth communication. In addition to the Wifi capabilities shared with the X-T20, the X-E3 can connect to a smart device and automatically transfer images while shooting using the lower power consumption of Bluetooth technology.

Check out our X-E3 vs X-T20 full comparison here.

The only thing that piqued my curiosity is the updated autofocus algorithm which on paper makes the X-E3 the fastest Fujifilm camera available. Fujifilm is already planning to bring this improvement to the X-T2 and X-Pro2 so let’s hope that they will do the same for the X-T20 later on.

Other details such as the arrangement of the external controls could push you in one direction or the other as well. We like the AF joystick on the X-E3 but I am not yet sure whether the replacement of the classic 4-way arrow pad with more touch gestures on-screen is a good thing or not. Why not have both and let the user decide? And while we’re at it, why not give the camera a tilting screen since it goes hand-in-hand with touch sensitivity? There’s always this feeling of “I’ll give you this but I’ll take away that”. At least the kit offering with the 23mm f/2 is attractive and could indeed be a decisive factor for some.