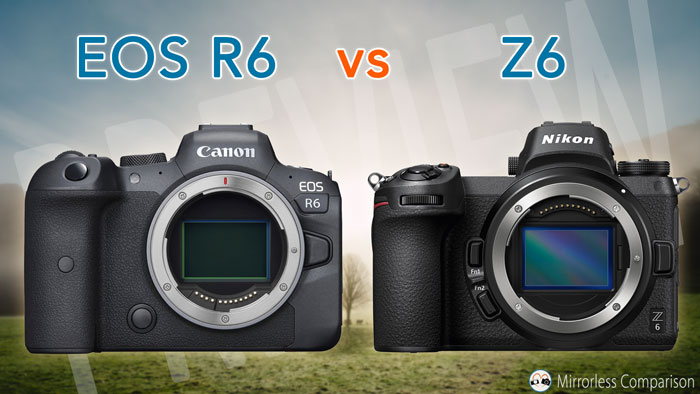 Nikon and Canon have been competing for years in the DSLR segment without any serious threat from third party brands. In the mirrorless sector, they have been much slower to evolve, giving time to competitors such as Sony to make a name for themselves.

In the last two years however, Nikon and Canon have become more serious about mirrorless. Canon especially, with its latest announcement (the R5 and R6), has scaled new heights. We’ve already covered how the new R6 compares against the Sony A7 III, so now let’s see how it stands up against its other direct competitor, the Nikon Z6.

Ethics statement: the following is based on information found on the Canon website (unless otherwise stated) and our direct experience with the Nikon Z6. We were not asked to write anything about these products, nor were we provided with any sort of compensation. Within the article, there are affiliate links. If you buy something after clicking one of these links, we will receive a small commission. To know more about our ethics, you can visit our full disclosure page. Thank you!

The Canon EOS R6 features a full frame CMOS sensor with 20.1MP whereas the Nikon Z6 sensor has 24.5 megapixels. An optical low pass filter is present on both. Furthermore, the Nikon sensor is a BSI type (back-illuminated).

Like many Nikon cameras, the Z6 offers a lot of options when it comes to image files: you can shoot in 12-bit or 14-bit RAW (compressed, lossless compressed or uncompressed), JPG and Tiff.

Canon and Nikon use on-sensor phase detection for the autofocus. Each focus point is composed of two tiny sensors that read the incoming light from two different points of view (left and right), creating two parallax images that are analysed by the camera’s software. If the images are different, the subject is out of focus. If the images are the same, the picture is in focus.

The EOS R6 uses Canon’s Dual Pixel CMOS AF and more precisely version II. With this technology, each pixel on the sensor is made up of two photodiodes. They are used together to create the image and separately to calculate the phase difference.

Canon’s technology allows the R6 to have a 100% AF coverage on the sensor when using the tracking modes (Face/Eye detection or Tracking AF). With other focus modes, it’s close with 100% height and 90% width coverage. With Canon EF DSLR lenses, it’s 80%. When using the single AF area, there are an impressive 6072 points to choose from!

The Z6 uses 273 phase detection points that are distributed across a large area of the sensor (90%). Unlike the Canon, these points are used for the autofocus only.

Concerning low light sensitivity, the EOS R6 can focus down to -6.5Ev with an f/1.2 lens (or -5 at f/2) whereas the Z6 can do -4Ev with an f/2 lens. Note that the latter is valid only if you activate the Low Light AF mode, which is more precise but slower. (In normal AF mode it is -2Ev.)

Both cameras feature face and eye detection. The Z6 has received various updates via firmware to improve the performance and can now even focus on the eyes of cats and dogs. The R6 can also focus on animals including birds thanks to deep learning technology. (It detects not only the eyes but also the body and face.)

The EOS R6 features excellent continuous shooting speeds: it can work at 12fps with the mechanical shutter, or up to 20fps with the electronic shutter. The Z6 can shoot up to 12fps when 12-bit RAW is selected, or 9fps with 14-bit RAW. All these speeds are available with AF and AE tracking.

The EOS R6 has good buffer capabilities too, at least judging from the official specifications. It can record 240 RAW files or 1000 JPG files at 12fps. This means approximately 20s shooting at full speed before slowing down with RAW, or more than 1 minute and 20s with JPGs.

Nikon hasn’t revealed the buffer specs for the Z6. In our test against the A7 III, it lasted for about 4s at 12fps with either 12-bit RAW or JPG Fine before slowing down.

The EOS R6 features 5-axis in-body stabilisation (a first for Canon) with an official rating that goes up to 8 stops of compensation, the highest ever given to a camera with this technology. Note that the rating can decrease depending on the lens used. (Check our full list in our R5 vs R6 article.)

The Z6 also includes internal sensor shift: like the Canon, the sensor moves on five axes to compensate for camera shakes, but has a lower rating of 5.0Ev.

Both systems can work for stills and video, and in conjunction with stabilised lenses. In that case three axes are used on the sensor of the EOS R6 (roll, x and y), and 1 axe on the Z6 sensor (roll). It also works with adapted DSLR lenses: the Z6 uses three axes only, whereas it is still unclear how the Canon system behaves with EF lenses.

Both cameras can add electronic stabilisation when recording video mode, which reduces the field of view but improves the result in certain scenarios.

The EOS R6 can record 4K video up to 60 frames per second with full pixel readout (oversampling) and a small crop on the sensor (1.07x). The bitrate goes up to 340Mbps with an IPB compression.

The Z6 also records 4K video with full pixel readout and no sensor crop, but at a maximum of 30p and a bitrate up to 100Mbps (IPB once again).

In Full HD, they can both go up to 120fps with the High Speed mode.

The ISO sensitivity changes a little on the EOS R6 when recording video: the maximum normal value is 25600 instead of 51200. The extended values remain available (up to 204800). The Z6 shares the same ISO range for video and still photography.

One advantage of the R6 is the possibility of recording 10-bit 4:2:2 video internally with either the C-Log or HDR PQ profiles. On the Z6, a log profile with 10-bit is available (N-Log) but you need to use the HDMI port connected to an external recorder. Furthermore, the same output can give you 12-Bit RAW when paired with the Atomos Ninja V. Note that this is a paid upgrade and you need to send the camera to Nikon’s technical service.

Both the EOS R6 and Nikon Z6 have a microphone input and headphone output.

Both cameras feature an electronic viewfinder with partially identical characteristics: 3.69 million dots (OLED) and an eyepoint of 23mm. The refresh rate is higher on the Canon (120Hz vs 60Hz) whereas the magnification is larger on the Nikon (0.8x vs 0.76x)

Both cameras have touch screen capabilities that are well-integrated and easy to use. You can do different things including navigating the menu which I find very useful sometimes.

The main difference is the moving mechanism: the screen on the Z6 titles up and down only, whereas the one on the R6 can be opened to the side and rotated 180˚.

The EOS R6 is a slightly bigger and has a larger front grip, but the Nikon is a bit taller. Overall we can say that neither the size nor the weight is dissimilar.

I can say that I really like the design of Canon and Nikon cameras: they are reasonably compact yet with a good front grip and great ergonomics.

Both cameras are weather-sealed and use a magnesium alloy chassis.

The button and dial layout is also very good. The EOS R6 has more custom buttons but I really like the still / video mode switch on the back of the Z6. There is an AF joystick on both, but only the Nikon has a top LCD screen to check settings on the fly.

Concerning physical connections, they both have a USB Type C port (which allows USB charging) and audio in and out (3.5mm). The Canon has a Micro HDMI port whereas the Z6 uses a Mini HDMI port which is a bit larger.

Wireless and bluetooth are included as well.

The Z6 has only one slot that fits the XQD / CF Express card. These cards are thicker and more robust than SD cards, and can be faster too, but Nikon’s decision to choose this standard and more important, to have just one slot, has been criticised a lot.

Both companies inaugurated their full frame mirrorless system at the same time: Nikon with the Z-mount and Canon with the RF mount.

At the time of publishing this article, Canon has released 15 lenses, including the constant f/2.8 trinity zoom lenses (15-35mm, 24-70mm and 70-200mm), two very fast primes (50mm 1.2 and 85mm 1.2), a few all-purpose and standard zooms and three super telephoto lenses. Many of these lenses are expensive but hopefully more affordable lenses will see the light of day. Canon has distinguished itself with the design of some lenses, like the 28-70mm f2 and the 70-200mm 2.8 which is smaller than usual, and the compact 600mm and 800mm f/11.

In both cases, you can use DSLR lenses (Nikkor F and Canon EF) with adapters and both companies have designed one that is often bundled with the camera.

Finally, a curious decision from Canon was to keep its full frame and APS-C mirrorless systems separate by not using the same mount, so lenses are not cross compatible. Nikon uses the same mount for the DX and FX systems, just like with its DSLRs.

Note these prices are as of July 2020, and that the US price doesn’t include tax.

The EOS R6 looks like a very promising camera that could tick all the boxes (at least on paper): impressive stabilisation, state of the art autofocus, fast burst speeds, excellent video capabilities, an ergonomic design, two card slots and weather sealing. The sensor is the same as the 1DX III which we haven’t tested, but since we’ve already pre-ordered our R6, we will know how it performs soon enough.

The Nikon Z6 is a camera that we currently own and really like when it comes to ergonomics: it is comfortable and easy to use, with all the buttons in the right place. The image quality is also rally good, the autofocus is better than many have suggested, and the image stabilisation a step above most in the full frame segment. The video quality is good but doesn’t have all the extra settings that an advanced filmmaker would like to see, although it does allow you to record RAW video (with a paid upgrade and the Ninja V external recorder).

Obviously the Nikon costs less which can be a major selling point. We’re curious to put them side-by-side for some serious testing.

Check price of the Canon EOS R6 on:
B&H Photo