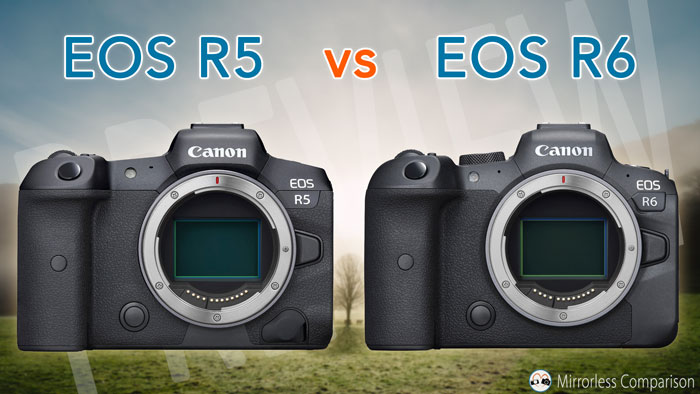 Canon has been in the mirrorless market since 2012, starting with the launch of the original EOS M APS-C camera. In 2018, they introduced the full-frame mirrorless EOS R with a different mount, but it is fair to say that none of these products pushed the boundaries in the same way as competitors such as Sony, Fujifilm or Panasonic.

In 2020, Canon decided to catch up for good with the introduction of the EOS R5 and EOS R6. There is a new sensor, 8K video, autofocus with deep learning AI, 20fps, 5-axis stabilisation with 8 stops of compensation and more. These are specifications that surpass even the competition. We’re excited to see Canon finally shaking the mirrorless market more seriously.

The two cameras were announced at the same time, so let’s see how they compare.

Ethics statement: the following is based on official information released by Canon concerning the R5 and R6, as well as feedback collected from other websites such as Dpreview. We were not asked to write anything about these products, nor were we provided with any sort of compensation. Within the article, there are affiliate links. If you buy something after clicking the link, we will receive a small commission. To know more about our ethics, you can visit our full disclosure page. Thank you!

EOS R5 vs R6: What they have in common

Usually I write a quick bullet list to highlight the shared specifications found on the two cameras, but since these products are brand new, it is worth digging a bit more into some of the new technology they have.

The new Canon phase detection system offers 100% coverage across the entire sensor surface when an automatic selection AF mode is used (Face/Eye detection or Tracking AF), with a maximum of 1,053 points (39x27 grid). For video, the zones used are 819 (39x21 grid).

Note that with older EF lenses or Extender type I and II, the area covered is 80%.

If you select an AF position manually (single point), the area covered is approximately 90% horizontal and 100% vertical, and there are no fewer than 6072 positions on the R6 or 5940 areas on the R5 to choose from (4968 for video)!

Focus acquisition is fast and measured at 0.05s.

Face and eye detection for humans is available, but the new addition is animal detection with deep learning technology. The R5 and R6 can track the body, face and eyes of cats, dogs and birds even when they are flying.

Canon is the last brand in the mirrorless sector to introduce 5-axis stabilisation, but it looks like the wait was worth it.

The R5 and R6 can provide up to 8 stops of compensation (CIPA rating) with select IS and non-IS lenses. IBIS can work on its own, or in conjunction with optical stabilisation.

The 8 stop rating is not available with every lens. Below you can how much compensation each RF lens gets:

The stabilisation system works for video as well, to which you can also add Digital IS (electronic stabilisation) with two levels (On and Enhanced).

Despite the difference in resolution, the two cameras share the same burst speeds: 12fps with the mechanical shutter, or 20fps with the electronic shutter. Continuous AF, as well as Auto Exposure, works at all speeds.

We should expect a difference in buffer performance given that the R5 has more resolution than the R6, and as a consequence larger files.

The R5 can record 180 RAW files before it starts to slow down, whereas the R6 should save 240 RAW files (measured at 12fps).

The first difference concerns the two full-frame image sensor. The EOS R5 has a brand new 45MP chip which was developed, among other things, to allow the camera to record 8K video (more on this further down).

The EOS R6 uses a variation of the 20.1MP sensor found inside the 1DX mark III flagship DSLR. Both the R5 and R6 have a low pass filter but the one on the R6 is not as advanced as the 1DX III – hence the slight difference between the two sensors.

The two cameras are the first to use the new DIGIC X Image Processor which has more high speed processing capabilities. The sensor readout speed has been improved which means that rolling shutter should be minor when using the electronic shutter or recording video.

In addition to RAW, C-RAW and JPG, the two cameras can record 10-bit HDR photos in the HEIF format. Already seen in the Panasonic S1 and S1R, these files contain more dynamic range and can be viewed on compatible HDR monitors. If you convert HEIF files in camera and save them as JPGs, you’ll get more details in the highlights and shadows in comparison to a standard JPG.

The specification that made the news more than any other since Canon started to tease the launch of the EOS R5 was the possibility to record 8K video. Now that we know all the specs, let’s see exactly what these two cameras are capable of.

The R5 can record 8K up to 30fps, and 4K up to 120fps. It is the first mirrorless camera to have these characteristics. What’s more, the camera can record DCI 8K RAW video with a 12-bit colour depth.

8K and 4K are recorded without a sensor crop. 8K and 4K up to 30p are oversampled (full pixel readout) whereas 4K at 60p or 120p is recorded with line skipping. Note that 4K at 100/120p can be accessed with the High Frame Rate mode which means you get the slow motion effect in camera.

Curiously, the maximum frame rate of the R5 in Full HD is 60p. I would have hoped for something like 240fps since it can do 120fps in 4K.

On the R5 you can choose between ALL-Intra and IPB compression, whereas only IPB is available on the R6 (maximum bitrate is 340Mbps).

All-intra on the EOS R5 gives you the following bitrates:

Dual Pixel CMOS autofocus remains active with all the resolution and frame rates of both cameras. The recording limit is the usual 30 minutes per clip (including 8K on the R5).

Both products can record 10-bit 4:2:2 internally (H.265 codec) with either the Canon Log or HDR PQ profiles. HDR PQ is more sophisticated in comparison to HLG and follows the Dolby Vision and HDR10 standards. 10-bit 4:2:2 is also available via the HDMI output.

Both cameras have a microphone input and headphone output, as well as extra settings such as Zebra, focus peaking Focus Guide and a 4K Time-Lapse mode.

Introduced with the 5D mark IV DSLR, the Dual Pixel RAW mode uses the technology of the Dual Pixel CMOS AF system to record a special RAW file that contains the depth information analysed by the phase detection pixels. This allows you to change a few things in post production such as focus, bokeh and flare, using Canon’s Digital Photo Professional software.

The adjustments you can make are really tiny, but it looks like Canon has improved this on the EOS R5. You can now also adjust background clarity and the light on a person’s face. I’m curious to find out more about this.

The EOS R5 and R6 look very similar when it comes to shape and button layout. The dimensions are basically the same but the R5 is a bit heavier.

The two cameras have a magnesium alloy chassis and a tempered front panel to improve internal rigidity. Gordon Laing says that the R6 has a polycarbonate exterior whereas the R5 has magnesium on the outside too. They are completely weather-sealed and the weather sealing on the R5 is supposed to be the same as the 5D IV DSLR. The R5 has a shutter unit rated at 500,000 actuations, whereas it is 300,000 for the R6.

The button layout is the same on the front and rear. On the top however, the R5 has a small LCD screen to check information at a glance instead of the classic shooting mode dial found on the R6. To change modes on the R5, you press the M button in combination with the front or rear dial, the touch screen or the rear wheel.

The R5 has an electronic viewfinder with 5.76 million dots, whereas the one on the R6 has 3.69M dots. The other characteristics are the same:

To the delight of many, the EOS R5 and R6 have two memory card slots.

The R6 uses the SD standard on both and is compatible with UHS-II.

The R5 has one CF express and one SD UHS-II slot. The CF express is type B which makes it compatible with the XQD standard you find on the Nikon Z6 and Z7, as well as the Lumix S1R.

Note that you can’t record 8K video on an SD card on the R5, you need to use a CFexpress card.

In addition to the 2.4Ghz Wifi that is also present on the R6, the EOS R5 has the faster 5.0GHz protocol that enables more features: you can connect to an FTP server or send images to a mobile device much faster.

Canon also has built an optional Wireless File Transmitter R10-A that looks like a copy of the Battery Grip BG-R10 but includes 5 GHz 802.11ac support to enhance the signal, and an Ethernet port.

Bluetooth is also available on both. It allows you to have a continuous connection, connect automatically to a paired device, or add GPS information to your images.

The two cameras use an updated version of the LP-E6 battery (LP-E6NH) which increases the capacity from 14Wh to 16Wh.

Both cameras can be charged via USB but you need a high current charger.

Another small difference is that the EOS R5 has an Audio recording function built-in, with a dedicated button for it on the rear of the camera on the top left next to the menu button.

This is useful to record some quick memos while photographing people or other situations where you need to add notes about a particular shot or moment.

The EOS R5 and R6 look like great products on paper, and I admit I’m quite excited about trying them out. It certainly shows that Canon now wants to conquer the full frame mirrorless market.

We’ll have to see how the sensors compare against Sony’s, how well the new autofocus system works and if there are going to be overheating problems when recording video (especially for the R5). Regarding the latter, there is an interesting article on EOSHD that shares official information that Canon supplied to dealers: it looks like that camera could easily stop after 20min when recording in 8K. (Update: Canon also issued a statement regarding this matter.)

Canon is also putting in a lot of effort on the lens front. Although we need more affordable options (especially primes), the 2.8 zoom trinity is already available, there are gems such as those in the 1.2 series, and now we’re also getting extreme telephoto lenses, including two curious primes, the 600mm f/11 and 800mm f/11.

Granted, f/11 is not exciting, but they are compact and well-priced, plus it is a move that nobody else has made so far in the full-frame camera department, so I’m curious to see how much I can get out of them for wildlife photography.

Check price of the Canon EOS R5 on
B&H Photo

Check price of the Canon EOS R6 on
B&H Photo