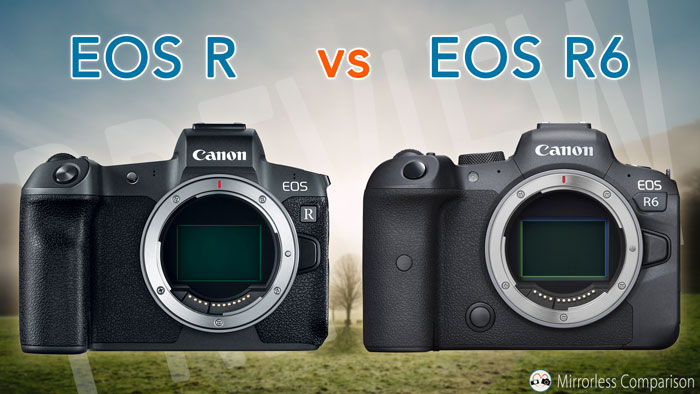 The EOS R was launched in 2018 and inaugurated Canon’s full frame RF system. I liked its design and ease of use, the image quality was good, the autofocus was full of potential, but the rest fell too short to impress the mirrorless market.

Two years later we meet the EOS R6 (along with its sibling the R5) with more promising specifications. Paired with all the latest lenses Canon has been developing for the system, the RF system suddenly looks mature and ready to compete.

Ethics statement: the following is based on our personal experience with the EOS R and official information about the EOS R6. We were not asked to write anything about these products, nor were we provided with any sort of compensation. Within the article, there are affiliate links. If you buy something after clicking the link, we will receive a small commission. To know more about our ethics, you can visit our full disclosure page. Thank you!

The two cameras have a similar design, so much that you might find them hard to distinguish at first, if not for the obvious name on the front.

The R6 is slightly larger but the weight is about the same.

The build comprises a magnesium alloy chassis and weather sealing.

The EOS R6 has a few extra buttons on the front and back, and a wheel on the rear instead of the 4-way pad of the R. There is also an AF Joystick.

On top of the EOS R you’ll find a small LCD screen that displays the settings in use. Instead of the traditional shooting mode dial, you press the M button in combination with one of the twin dials, the D-pad or touch screen to change the shooting mode.

Exclusive to the EOS R is the M-Fn touch bar that works with two gestures and can be programmed for different settings (I used it for the ISO). Canon didn’t receive a great feedback about this and as such, abandoned the idea on the R5 and R6.

The EOS R6 is shipped with a new battery called LP-E6NH that improves its capacity by 14%. It has the same form factor and connections as the older LP-E6N so it should work on the EOS R.

The EOS R has a single SD card slot (UHS-II) whereas the EOS R6 has two UHS-II slots. This is good news for any photographer disappointed by the single slot of the R model.

The EOS R and R6 viewfinders share the same characteristics: 0.5-in size, 3.69M dots of resolution, 0.76x magnification and a 23mm eyepoint.

The only difference, at least on paper, is the refresh rate: that of the EOS R is 30Hz by default, or up to 60Hz when you half press the shutter button. The R6 viewfinder can go up to 120fps.

The rear LCD screen offers touch sensitivity on both, but the specs are a bit different: the one on the R is slightly larger (3.15 vs 3.0 inches) and has more resolution (2.1M vs 1.6M dots).

The EOS R delivers good image quality but doesn’t have the best dynamic range or high ISO performance for this kind of product. We’re curious to see how the new 20MP sensor performs, despite the loss of resolution.

Also new on the EOS R6 is the image processor (Digic X) whereas the R model uses an older version (Digic 8). The R6 should have more processing power and speed, which also means faster sensor readout and hopefully less rolling shutter (the R suffers a lot from it).

Another addition to the EOS R6 is the possibility to take HDR photos (HEIF format) using the HDR PQ gamma curve, which delivers more tonal range in the shadows and highlights than standard JPG files.

This new format is not widely spread yet, but you can convert HDR photos to regular JPG in camera and retain more dynamic range than the standard JPG.

Both cameras feature an advanced autofocus system based on phase detection that Canon calls Dual Pixel CMOS AF. The R6 has the new version which debuted alongside the EOS R5.

When using face/eye detection or Tracking AF, the EOS R6 can follow your subject across the entire area of the sensor (100% coverage). With the other AF modes, it’s 90% horizontal and 100% vertical. The EOS R is not far off with 88% and 100% respectively for all AF modes.

When using the single point, the R6 lets you choose between no fewer than 6072 areas, whereas the EOS R has 5,655 areas. I can tell you that it takes a bit of time to move the AF point through all those areas if you don’t use the touch screen! But it adds a great level of precision when you need it.

More than AF points and area coverage, the most important improvement on the R6 is the new algorithm that includes deep learning technology. In addition to tracking the faces and eyes of people (like the R model), the R6 can also track the bodies, faces and eyes of various animals including birds. The AF locking speed is rated at 0.05s.

In our tests, the EOS R proved to have a very capable autofocus system and it has since received some improvements via firmware. That said, the overall slow speed of the camera in terms of processing doesn’t take full advantage of the potential. I have great hopes concerning the improvements on the EOS R6.

The EOS R doesn’t excel when it comes to continuous shooting speeds. The fastest frame rate of 8fps is fine with Single AF, but if you want continuous AF it drops to 5fps, or even 3fps with focus priority. Not really a sports camera.

The EOS R6 on the other hand can do 12fps (mechanical shutter) or 20fps (electronic shutter) with complete autofocus and exposure tracking. That certainly sounds promising, and if there is not a lot of rolling shutter, 20fps could be very interesting for wildlife.

As for the buffer capabilities, the R6 is also superior: it can save 1000 JPGs or 240 RAW files at 12fps, whereas the EOS R can only manage 100 JPGs or 47 RAWs at 8fps. Definitely no competition here!

The EOS R doesn’t have in-body image stabilisation (IBIS), so you must rely on lenses with IS (optical stabilisation). With the RF 24-105mm f4 IS for example, I can get a few sharp shots taken at half a second hand-held, but the keeper rate improves from 1/8s.

The EOS R6 plays in a different league. It features 5-axis IBIS with a maximum compensation rating of 8 stops (CIPA) when paired with select lenses. (See our R5 vs R6 article to read the exact compensation for each lens.)

The stabilisation on the sensor can work on its own, meaning you get stabilisation with any lens, including those that feature IS. In the case of the latter, three axes are used on the sensor (X, Y, Roll) and two on the lens (Pitch and Yaw). Camera and lenses communicate at high speed to improve the result with the additional help of acceleration and gyro sensors on the camera body.

8 stops of compensation is the highest rating seen from a stabilisation system and early testers have successfully taken shots at 1 second, 2 seconds and even four seconds hand-held. I’m really curious to see how well it is going to perform in my tests.

The EOS R can record 4K video up to 30p and 480Mbps (All-Intra codec) which doesn’t sound bad at all. However there are two caveats: there is a heavy sensor crop (more than 1.7x) and rolling shutter is severe. It’s a shame because otherwise I really like the colours and the Canon Log profile.

You will find a microphone input and headphone output on both products, as well as various focus assists (including my all time favourite Focus Guide which uses the Dual Pixel technology). The R6 also has Zebra patterns.

Prices are for the body only and as of July 2020. US prices exclude tax.

The EOS R6 has many interesting characteristics that make it superior to the EOS R in almost every way and far more competitive against the likes of Sony, Nikon and Panasonic.

The EOS R retains more resolution, which is probably the only thing that might still attract some users, as well as the lower price, but the 20MP chip on the R6 should provide better dynamic range and high ISO performance.

Check price of the Canon EOS R6 on
B&H Photo