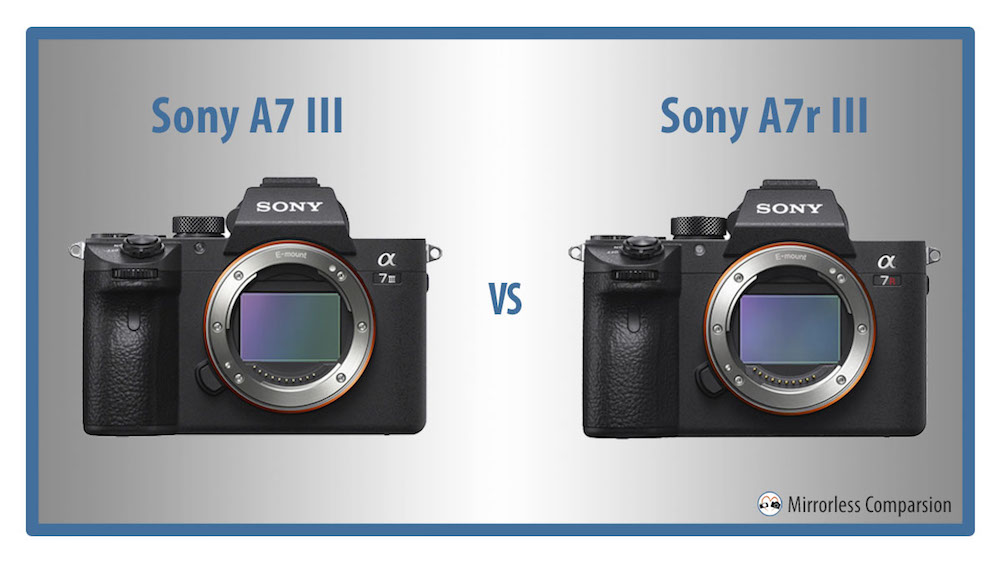 The Sony A7 mark III and A7R mark III have much in common, not least the design which would be identical were it not for the camera name on the front and rear.

But given that one is two-thirds the price of the other, we can’t help but ask: which is the better investment? We try to answer this question in the following comparison preview that lists the ten main differences between the two full-frame E-mount mirrorless cameras. Enjoy!

Update: our A7 III vs A7R III full comparison is now online!

Ethics statement: The information supplied in this article is based on the official specifications found on the Sony website and our experience with Sony E-mount cameras. For a more in-depth analysis, check out our A7 III vs A7R III complete comparison. We were not asked to write anything about these cameras, nor were we provided with any sort of compensation. Within the article, there are affiliate links. If you decided to buy something after clicking the link, we will receive a small commission. To know more about our ethics, you can visit our full disclosure page. Thank you!

The first relevant difference when it comes to image quality concerns the resolution: the A7 III has 24.2 megapixels while the A7R III has 42.4 megapixels.

The technology used on both full frame sensors is similar though: they both include a BSI structure which gathers more light than conventional sensors and a front-end LSI chip to improve the readout and processing speed of the cameras.

Both cameras record 14-bit RAW with uncompressed or compressed options.

The A7R III sensor is one of the best Sony has ever produced for its mirrorless cameras when it comes to dynamic range and resolution but in our full test we found out that the A7 III sensor is not inferior by any means.

The A7 mark III inherits the same number of phase detection areas seen on the A9: 693 points that cover 93% of the sensor surface. The A7R III has fewer points (399) that cover a smaller portion of the sensor (68% width and height, or 47% of the area). The number of contrast detection points is the same on both cameras however (425).

Both systems have a minimum sensitivity of -3Ev and include useful features such as Eye AF and the AF Track Sens setting to control the responsiveness of the autofocus in continuous mode.

The A7 III AF algorithm is based on the flagship A9. Its autofocus is reliable and one of the best in the mirrorless market. The A7r III is very good too but it struggles a little bit more with difficult subjects such as birds in flight.

Both cameras feature sensor stabilisation that works on 5 axes, but the A7r III features the most advanced of any E-mount camera to date with its 5.5Ev rating. This is only marginally better than the A7 III however (5Ev by CIPA standards).

Both cameras can work in conjunction with OSS lenses where three axes are used on the sensor and the remaining two on the lens.

The A7R III has a special feature all for itself called Pixel Shift Multi Shoot. It takes advantage of the sensor shift mechanism to capture four images in a row by moving the sensor a single pixel between each shot. You can then composite the four pictures into one shot that offers better detail and more colour accuracy. The resolution remains the same.

This technology does come with some limitations however: it won’t work hand-held, and because the cameras takes half a second to move the sensor, it won’t work with moving subjects either. Also bear in mind that the composite can’t be created in-camera, so you need to rely on the Sony Imaging Edge Software.

Below you can see an example taken with the FE 55mm lens.

Both cameras can shoot at a maximum of 10fps, but because the A7 III has less resolution, it can load more frames. More precisely it can record 177 JPG files or 89 RAW images.

The A7R III doesn’t do too badly given the 42MP resolution but it obviously can’t match the same performance. It saves 76 frames in JPG format or 76 compressed RAW format.

One thing the new A7 mark III doesn’t inherit from the higher end models is the electronic viewfinder: it keeps the same OLED panel as the A7 II with 2,360k dots of resolution and a 60fps refresh rate. The magnification is the same as the A7R III however (0.78x) thanks to a new optical design.

The A7R III has a 3,686k OLED panel and a faster refresh rate of 100/120fps. We found that the extra resolution combined with the sensor makes a big difference when focusing manually in stills mode, especially when using magnification.

As for the rear screen, they both feature touch sensitivity and a tilting mechanism, but the resolution on the A7R III is higher (1,440k vs 921k dots).

Both cameras can record 4K up to 30fps and 100Mbps using the X AVC S codec. However there are a couple of very important differences when it comes to quality and format.

The A7 III takes advantage of the full width of the sensor to perform full pixel readout without pixel binning, gathering the equivalent of 6K resolution that is then down-sampled to 4K. This works at 24 and 25fps, while at 30fps the camera crops the sensor by 1.2x, gathering 5K of resolution instead.

Because it has more megapixels, the A7r III gives you the best results in APS-C/Super35 mode, where it gathers 5K of data that is then downscaled to 4K. You can record 4K in full frame mode as well but the quality decreases, especially at high ISOs where there is more visible noise.

Other features such as picture profiles, S-Log2, S-Log3 and HLG gamma curves are included on both models. They also feature audio in & out and a clean 4:2:2 8-bit HDMI output.

The A7R III has an extra port dedicated to flash synchronisation.

The two cameras use the same battery, the new NP-FZ100. It is a significant improvement over the previous battery, which was both smaller and less efficient.

The A7 III is the most efficient of all A7 cameras: it can record up to 710 images – or 610 with the EVF – whereas the A7R III performs slightly worse at 650 shots (or 530 frames when using the EVF). As usual, in real world conditions, you’ll realise that these figures are actually fairly conservative estimates.

Both cameras can be charged via USB and unlike the A7 III, a battery charger is supplied with the A7R III.

Update: our A7 III vs A7R III full comparison is now online!

If the specifications are anything to go by, the A7 III definitely feels like a more balanced solution than the A7R III. It combines high quality stills and video with the most recent autofocus system, all in a very affordable package. We’re confident it will be the weapon of choice of many enthusiast photographers interested in switching to the FE system.

The A7R III may be more expensive, but its 42MP sensor does perform really well as our comparison with the medium format GFX clearly shows. Landscape, still life and fine art photographers in particular will certainly find the camera an excellent tool, so if this is where your main interests lie, it could be worth the investment.