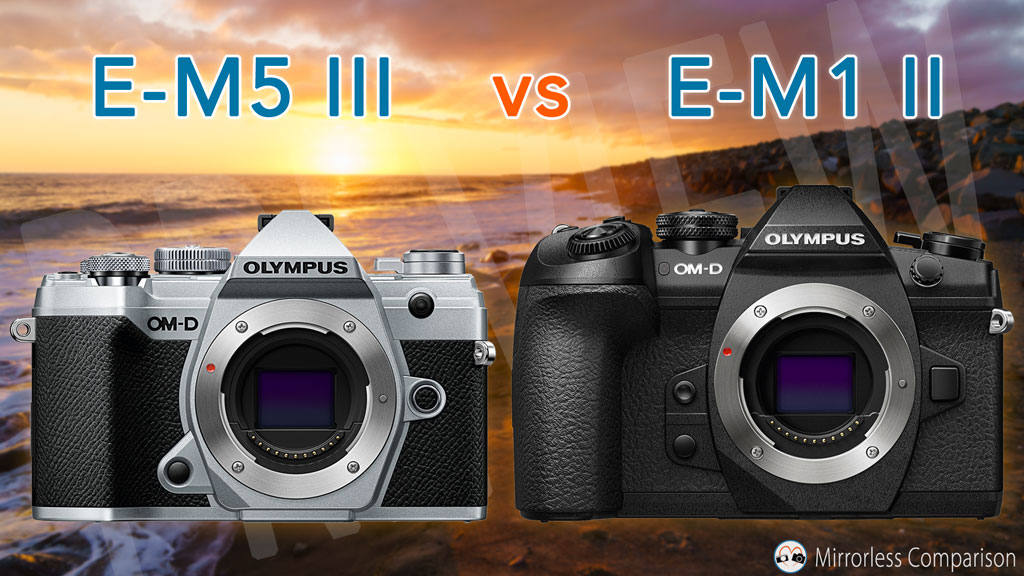 The E-M1 and E-M5 series have always been synonymous with innovation. One introduced the first 5-axis stabilisation system, while the other brought phase detection AF. Later on, they gave us High Res Shot modes and super fast continuous shooting speeds.

The E-M5 III is the third generation E-M5 model and the first not to introduce anything new. Rather it serves up a number of important updates that make the series more competitive in the ever evolving mirrorless market.

The E-M1 II is now three years old but it remains an appealing product thanks to continuous firmware updates and its reduced price. Let’s see how they compare.

Ethics statement: the following is based on our hands-on with the E-M5 III and our multiple tests with the E-M1 II. We were not asked to write anything about these products, nor were we provided with any sort of compensation. Within the article, there are affiliate links. If you buy something after clicking the link, we will receive a small commission. To know more about our ethics, you can visit our full disclosure page. Thank you!

One of the most important differences between the two cameras is the larger front grip found on the E-M1 II. To be honest it is one of my favourite designs: despite its relatively compact dimensions, the camera is very comfortable to hold with small and big lenses, and the grip feels very secure.

The E-M5 III grip is smaller by comparison and probably not as comfortable when using large lenses such as a 40-150mm f2.8 Pro or the 300mm Pro. However an optional landscape grip is available, the EGC-5, which is really good if you’re looking for extra space to put your hand. It has a shutter button and a front dial.

There is another difference concerning the build quality. The E-M5 III is mainly made of polycarbonate whereas the E-M1 II has a magnesium alloy frame. The former is lighter as a result. Despite the predominant use of plastic on the E-M5 camera, Olympus guarantees the same high level of weather sealing.

The button and dial layout is pretty much the same on the two cameras. The E-M1 II has two function buttons on front near the mount instead of one, and there are three custom modes selectable on the main dial on top instead of one.

On the rear thumb grip, the E-M5 has an ISO button by default rather than a focus area button but both are programmable. On the top left, the E-M1 has an AF mode button rather than a display button.

The E-M5 III has one slot for the SD card (UHS-II standard). The E-M1 II has two slots, the first one being UHS-II compatible.

Both cameras have a dedicated compartment for the memory cards on the right side of the body.

3. Battery: one of the very best inside the E-M1 II

When Olympus released the E-M1 II, it developed a new battery (BLH-1) with more capabilities than ever before. The official rating is 440 shots (CIPA) but I managed more than 1500 shots on a single charge without completely running out of juice.

For the E-M5 III, Olympus opted for the small BLS-50 battery which is the same used for the E-M10 series. The official rating is about 310 shots by CIPA standards, so it won’t be as good as the M1 model.

One advantage of the E-M5 III is the possibility to charge the camera via the USB port. The E-M1 II is the only one with an optional battery pack however.

The E-M5 III features an electronic viewfinder with 2.36M dots of resolution, a magnification of 0.69x and an eyepoint of 27mm. The eyepoint is longer than the length you usually find on other cameras. It helps people like me to see the entire frame when wearing glasses.

The E-M1 II has the same resolution but a larger magnification of 0.74x and a shorter eyepoint of 21mm.

The refresh rate is also different: the E-M1 II can work at 120Hz when the High mode is selected, whereas the E-M5 III does a maximum of 60Hz.

First introduced with the E-M1X, the updated Super Sonic Wave Filter has made it onto the E-M5 III: the mechanism produces 30,000 vibrations per second when you turn on the camera to eliminate dust on the sensor.

The E-M1 II also has a SSWF but it isn’t as fast as the one found on the M5 camera.

6. Autofocus algorithm: something extra for the E-M5 III?

The two cameras use the same autofocus system, which comprises 121 cross-type phase detection points. The minimum sensitivity is -6Ev (with a f1.2 aperture).

The performance on the E-M1 II has been improved with firmware 3.0. I found that it delivered better results for birds in flight and for video. (Before the camera only used contrast detection in movie mode.) It doesn’t reach the same level as the flagship E-M1X, but it isn’t too far behind.

From what Olympus told me, the E-M5 III has the same algorithm as the flagship E-M1X. One of the differences with the E-M1 II is that the camera analyses focus on the images taken, not just the live view, to improve accuracy and correction time.

Furthermore, the autofocus on the M5 camera has been tweaked to improve other things such as for example the camera switching too easily to the background in certain scenarios. I’m not quite sure what they mean by this but I do know that all Olympus cameras often mis-focus when there are specular highlights in the background (city lights, etc.). I’m curious to see if the E-M5 III is more capable in these situations.

It’s hard to tell you what and if there are concrete differences in performance between the E-M5 III and E-M1 II without performing side by side tests. In my quick hands-on with the new camera, I observed similar behaviour to the E-M1 II and E-M1X when it comes to C-AF in video mode.

Face and Eye detection seems a bit better as well but I only took a few shots so this needs further testing. Most of the shots were in focus and a few were slightly soft which seems to echo what I remember about the E-M1 II.

Most of the video specifications found on the two products are identical:

The first difference is that the E-M5 III can record up to 120fps in Full HD, whereas the E-M1 II stops at 60fps.

The second difference is that the E-M1 II has the OM-Log400 gamma profile, which was added with firmware 3.0, and allows you to record more dynamic range than with the Flat profile (although the difference is not huge).

Finally, the E-M1 II has a headphone output to monitor audio recording.

The E-M1 II offers impressive continuous shooting speeds when using the electronic shutter: up to 60fps in S-AF (High mode) or 18fps in C-AF (Low mode). The E-M5 III does 30fps and 10fps by comparison, which is still not bad.

The electronic shutter allows both cameras to use another function called Pro Capture to save images before the shutter button is fully pressed. The E-M5 III can save up to 14 frames whereas the E-M1 II can save 35 images with this mode.

With the mechanical shutter, the E-M1 II remains faster at 15fps in S-AF and 10fps in C-AF. The E-M5 III does 10fps and 6fps respectively.

The E-M5 III adds Bluetooth capabilities in addition to Wifi to allow the camera to pair with mobile phones and tablets and connect more quickly after the first installation. I have yet to try this on the new model, but in my experience with the E-M1X, I didn’t find that Bluetooth brought much of an advantage since after pairing, a WiFi connection is also required.

Wireless capabilities allow you to do a number of things including remotely controlling the camera and transferring images (including RAW files).

Various bundles with different lenses are available. Note that the price will certainly vary over time with reductions, instant rebates and special offers. See the links below for the latest price updates.

The differences between these two cameras are more subtle than you might think. We have the same sensor and autofocus system, albeit with a few software tweaks that could potentially give the E-M5 III a small advantage.

The E-M1 model offers better ergonomics by default, a longer battery life, faster continuous shooting speeds and a few extra settings for video. I think it will remain the preferred choice of sports or wildlife photographers.

The E-M5 II is more compact and might be more appealing from an aesthetic point of view. It is also less expensive which is always something to keep in mind. Given the unrivalled image stabilisation and the improvements in the AF and video department, it becomes a very interesting option for travel and vlogging.

Check price of the E-M5 III on
B&H Photo