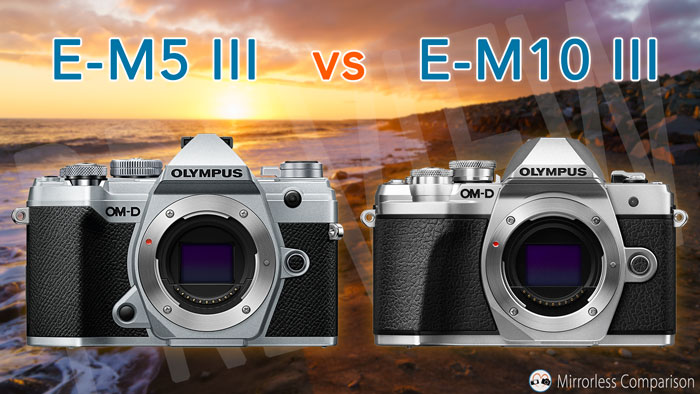 The E-M5 III arrives four years after its predecessor and brings some important upgrades such as phase detection autofocus and 4K video, features that are now commonly found on other cameras.

The E-M10 series has developed more rapidly than the E-M5 perhaps because of its more attractive price point. It is the entry level model in the OM-D range but retains some key features found on other cameras. Let’s see how these two mark III models compare.

Ethics statement: the following is based on our direct experience with the E-M10 III and the E-M5 III which we saw at a press event. We were not asked to write anything about these products, nor were we provided with any sort of compensation. Within the article, there are affiliate links. If you buy something after clicking the link, we will receive a small commission. To know more about our ethics, you can visit our full disclosure page. Thank you!

Both cameras feature a plastic construction for the most part but the E-M5 III is fully weather proof (dust, splash and freeze proof down to -10°C) whereas the E-M10 III is not.

The E-M10 model is a bit smaller but the weight is basically the same.

Out front, the E-M5 III has one function button located near the mount. On top, they feature a main shooting mode dial and twin dials for exposure. The M5 model has two extra buttons for the drive and display modes next to the on/off switch.

On the rear, the main difference is that the M10 lacks the Function toggle (1/2 position). The AEL/AFL button is replaced by an ISO button.

Neither camera has a large grip but you can buy an optional grip extender for the E-M5 III (ECG-5). Third party options can be found for the E-M10 III.

Each model has one slot for the SD card and supports the UHS-II standard. The difference lies in the location: the M5 model has a dedicated compartment on the side whereas the E-M10 III stores the card at the bottom inside the battery compartment.

The E-M5 III features a larger viewfinder with more magnification (0.69x vs 0.62x) and a longer eyepoint (27mm vs 19.2mm). The latter is useful for people wearing glasses because you maintain a better view of the entire frame. The resolution and refresh rate is the same: 2.36M dots and 60Hz.

On the rear, they both feature a 3-inch LCD monitor with touch capabilities but the mechanism is different. The E-M5 III has a multi-angle type that allows you to open the monitor to the side and rotate it 180°. The E-M10 screen tilts on two axes only (up and down).

The two cameras use the same battery, the BLS-50, and have a similar rating: 310 shots for the M5 and 330 shots for the M10. Note that in real life, you can get a higher score than this.

The advantage of the E-M5 III is that the battery can be charged via the USB port.

The E-M5 III gets the 20MP upgrade seen on many other micro four thirds cameras. The new sensor improves dynamic range and high ISO performance a little but nothing drastic in comparison to previous sensors. The E-M10 III uses an older 16.1MP chip.

Both uses the TruePic VIII image processor although the one on the M5 model is more advanced.

Both cameras have a Supersonic Wave Filter that shakes off the dust on the sensor when the camera is powered on. The mechanism on the E-M5 III is more advanced and can vibrate 30,000 times per second (like the flagship E-M1X).

Perhaps the most interesting thing to talk about when it comes to image quality is the High Res Shot mode which is only available on the M5 model.

It allows you to take a picture with more resolution that the native sensor (50MP with JPG and 80MP with RAW). Eight shots are taken with a half pixel movement of the sensor each time, and then composited in camera to create the final output. It also improves colour resolution and eliminates moiré.

To get good results, the camera needs to be on a tripod and you must avoid any sort of movement in the frame. The E-M5 III can minimise small movements such as flowing water but the result will still not be as good as a single shot.

The OM-D E-M5 III inherits the same autofocus system found on the flagship E-M1X. It has 121 contrast and phase detection points, and the phase points are all cross-type. Phase detection improves continuous autofocus and tracking with fast subjects and busy backgrounds, both of which confuse contrast detection systems.

In my brief time with the camera, I saw the same reactivity I found with the E-M1 II and firmware 3.0 and the E-M1X, so it is a welcome upgrade to the E-M5 series. Low light sensitivity has been improved as well.

The E-M10 III has 121 contrast detection points. The camera focuses fast, especially in S-AF, but it can reach its limit more quickly with fast moving subjects and in low light conditions. It is slower when recording videos too.

Face and Eye detection is available on both cameras but once again phase detection will help you achieve more consistent results for stills and video on the E-M5 III.

Both cameras can record 4K up to 30fps and 102Mbps. However the bitrate is variable on the E-M10 III and while testing the camera a few years ago, I noticed that it would often stay below 50Mbps.

The E-M5 III has extra settings that will interest more advanced users:

The E-M10 III is slower with a maximum burst of 8.6fps in H mode (S-AF only) and 4.8fps in L mode (C-AF available), regardless of the shutter type used (mechanical or electronic).

The new camera has the Pro Capture mode that allows you to save images before fully depressing the shutter release button. It is useful to capture unpredictable moments or very fast action. It works at 30fps or 10fps with continuous autofocus, and can save up to 14 frames before the shutter button is pressed down completely.

Finally, the E-M5 III receives an anti-flicker mode that keeps a constant exposure under artificial light when using burst shooting.

If there is one thing Olympus keeps doing better than everybody else, it is 5-axis image stabilisation. The E-M10 III doesn’t have the best version the company has to offer with a compensation rating of 4Ev (CIPA), yet I find it more reliable than many other cameras. A 1 second shot hand held is far from impossible and the keeper rate improves a lot from half a second. It works well for video too.

The E-M5 III gets the same level of stabilisation seen on the E-M1 II (at least on paper), with a compensation of 5.5Ev. Furthermore, the camera is compatible with Sync IS where both sensor and optical stabilisation are used, and the rating goes up to 6.5Ev with the 12-100mm Pro. I managed a 2s shot hand held at the press event and I might be able to do better with more time. A 1s photograph is easy to achieve.

The E-M5 III does really well for video too as you can see below.

The E-M5 III is more advanced and more recent than the E-M10 III, and packs some extra functionalities as a result. You will find:

Note that focus stacking works with select Olympus lenses only.

The E-M10 III has a built-in flash whereas the E-M5 III is supplied with the small FL-LM3 flash that you can attach to the hot-shoe.

Another thing to point out is that the E-M10 III has a simplified graphic interface that is more beginner friendly. In the process though, they’ve limited some functionalities. For example, the silent mode (electronic shutter) can only be accessed via the Scene mode and not when using full manual controls.

The difference in price is significant, especially if you consider buying the camera with one kit lens, and I feel those on a budget will probably go for the E-M10 III. After all, the camera delivers good performance, has an excellent image stabilisation system, decent 4K video quality and a simplified menu interface that is easier to navigate for those just starting out.

The E-M5 III can improve the quality of your results in different ways. First there is phase detection autofocus, which will give you much better speed for video and with continuous autofocus. Then you get weather-sealing, a more advanced stabilisation system (with Sync IS compatibility), faster continuous shooting speeds and extra settings to play with. Whether you feel it is worth the extra money depends on how much you need these features.

Check price of the E-M5 III on
B&H Photo