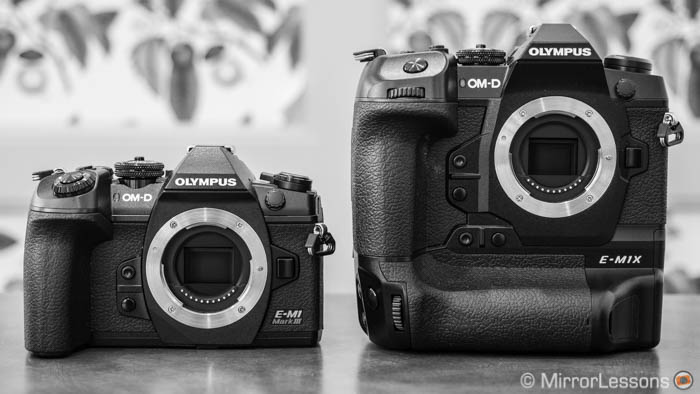 The OM-D E-M1 mark III is the latest high-end model to join the Olympus fleet. It incorporates the most recent features the brand has to offer, many of which were inherited from the flagship E-M1X.

Looking at the E-M1X, it is easy to see that it is an entire different beast. For one, it is the first Micro Four Thirds camera (and actually the first mirrorless camera) with an integrated vertical grip. But there is more than just the size that differentiates these two models as we’ll find out below!

First, here is a quick recap of the many characteristics they share:

Ethics statement: the following is based on our brief time with the E-M1 III at the press event, and our full review of the E-M1X. We were not asked to write anything about these products, nor were we provided with any sort of compensation. Within the article, there are affiliate links. If you buy something after clicking the link, we will receive a small commission. To know more about our ethics, you can visit our full disclosure page. Thank you!

The size of the E-M1X has been a controversial topic since the camera was released. We are so used to associating Micro Four Thirds with compactness that in a way, the dimensions of this new camera look horribly wrong.

But there is a simple reason the E-M1X looks so big: its design incorporates the vertical grip that you usually buy separately for other cameras (such as the optional HLD-9 grip). Granted, the E-M1X is slightly bigger even compared to the normal E-M1 with the grip attached, but the difference is less noticeable.

Designs like this are common on flagship DSLRs (Nikon D, Canon EOS 1D series) and Olympus simply took a gamble on wildlife photographers being interested in a compact system that embraces this specific camera design. (Although the X model is large, the lenses remain small).

Another thing worth mentioning is that the E-M1X feels very solid, more than any other m4/3 model. Both are completely weather-sealed, but the X is said to guarantee the sealing even when there are cables plugged into the remote, headphone or microphone sockets.

Finally, the flagship has a different (and more efficient) heat dissipation structure.

The E-M1 III and E-M1X share the same EVF panel: it is OLED with 2.36M dots and a decent resolution. However it feels a bit outdate now that we’re seeing viewfinders with more than 5 million points.

The main difference is the optical design that changes the magnification: 0.74x on the E-M1 III and 0.83x on the E-M1X. The flagship also has a larger eyecup.

Other characteristics remain the same: a 5ms lag and a 120fps refresh rate.

The larger size of the E-M1X allowed Olympus to include a few extra controls.

On top, there is a bracketing button next to the AF and Drive buttons. On the rear, there is a CARD button that allows you to switch between the two slots. The flagship has two extra function buttons as well (12 vs 10). Some of the buttons are larger, or have a different textures that allow you to differentiate them better by touch.

Another difference is that the E-M1X has a second AF Joystick placed at the bottom so you can continue to use it when you hold the camera in vertical mode. However, the same joystick is not present on the HLD-9 battery grip compatible with the E-M1 III (it was designed before Olympus started to add the joystick to its cameras).

Finally, the flagship has an extra step on the Lock lever to disable a selection of buttons (which you can customise in the menu).

Both cameras can work with two cards, but while both slots on the E-M1X are compatible with the UHS-II standard, only one is on the E-M1 III. (Olympus told us that the UHS-II motherboard for the second slot would have required additional space).

The flagship also has a different type of mechanism to access the cards: there is a lever to unlock the cover, whereas on the E-M1 III you simply slide it backwards.

With the E-M1X, Olympus introduced impressive new features such as the high res shot mode hand-held and Live ND, as well as new AF settings. The explanation was that by adding two TruePic VIII processors instead of one, the camera had enough processing power to make these functions a reality.

Of course technology advances and processors become faster. The E-M1 III has the brand new ninth generation TruePic IX that allows the camera to incorporate most of these advanced features.

The E-M1X introduces the most advanced AF system to date in the OM-D series. The E-M1 III uses the same technology and adds an updated face / eye tracking algorithm. The camera can recognise the eyes sooner while the subject is approaching, and I found it more reliable when the person moves the head rather than looking straight into the camera.

This difference might not last for long however: I wouldn’t be surprised if Olympus releases a firmware update for the X to equalise the performance.

The E-M1 III might have the same AF as the E-M1X, but there is one thing that Olympus left out: Intelligent Subject Detection.

This special AF Tracking mode uses Artificial Intelligence to recognise different types of subjects automatically and focus on them. Currently, the E-M1X can detect cars, bikes, airplanes and trains. In my tests, it didn’t always make a difference versus the normal Target mode, but I’m sure there is margin for improvements.

I’m also curious to see if more subjects can be added to this technology. Sony and Panasonic cameras can recognise animals for example and that would be a neat thing to have on OM-D products too. Let’s hope that Olympus is working on something like that.

One entirely new feature Olympus has released with the E-M1 III is called Starry Sky AF. As the name suggests, this function lets you focus automatically on the stars in the night sky. It uses an elaborate algorithm to scan the zone in the AF Target selected and acquire focus.

There are two modes available: a faster one designed to be used hand-held, and a slower one that does a more in-depth scan of the image and is recommended for tripod work.

This idea is not entirely new (Panasonic has a similar option called Starlight AF), but it looks more advanced and the first reviews have talked positively about it. I’m curious to try it myself later on.

Here as well, I can see this mode coming to the E-M1X via firmware at some point.

The E-M1X has integrated field sensors including a GPS, a barometer and a compass. There is no need to connect to your smartphone or external device to record location data.

The information is saved in a log file and can be included in the EXIF data of the image (latitude, elevation direction, temperature), or saved to the SD card.

The E-M1X is more expensive and can be found for $2600, £2200 or €3000. (Note that the American and British prices are discounted at the time of publishing this article.)

When Olympus released the E-M1X, there were more things to talk about in our comparison with the E-M1 mark II. Now that the E-M1 III is out however, there are so many things the two cameras share that in the end, it really is a question of design and size.

If you like the integrated grip of the E-M1X and don’t mind the higher price, the flagship will serve you well and you’ll appreciate the extra buttons and the built-in GPS.

If you’d rather spend less and have a more compact body, the E-M1 III is the answer. Plus you can always add the optional grip later if you need to (although you won’t have an AF joystick when working in portrait mode).