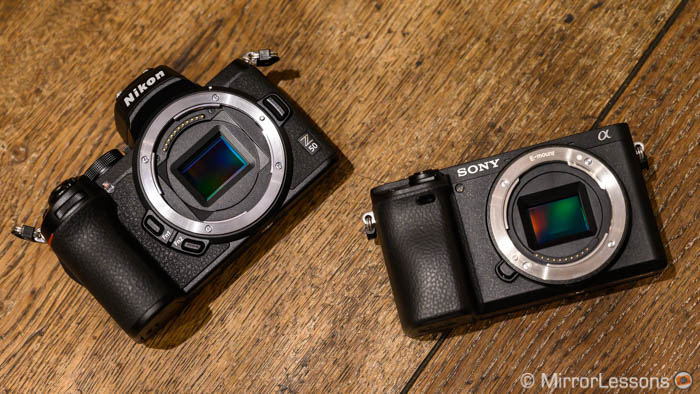 The Nikon Z50 is the company’s first APS-C mirrorless camera. Part of the growing Z system, it enters a crowded segment where Sony, Fujifilm and Canon have been competing for some time now.

Sony is one of the most aggressive brands in this segment thanks in part to the number of models it has on sale. In this comparison preview, we take a look at how the Z50 stacks up against two of the most recent models with a similar price tag.

Ethics statement: We own the a6400 and we saw a pre-production Z50 at a press event. We were not asked to write anything about these products, nor were we provided with any sort of compensation. Within the article, there are affiliate links. If you buy something after clicking the link, we will receive a small commission. To know more about our ethics, you can visit our full disclosure page. Thank you!

I have based this comparison around the Z50 and the A6400 because I had the Sony camera with me at the event and was able to take side by side shots. The A6100 is extremely similar to the A6400 including the dimensions, weight and button layout. I will state throughout the article what the more evident differences are.

There are a number of differences that become evident straight away when looking at the design of these two cameras.

The Z50 is taller because of the centrally placed EVF protruding from the top. It also has a larger front grip. I can already tell you without a doubt that the Z50 is more comfortable to hold and feels more steady in the hand. The Sony grip isn’t bad with small lenses but not as comfortable when you start to mount larger glass.

You can appreciate the extra controls on the Nikon body such as the dedicated ISO button on top, the twin dials (there is no front dial on the Sony) and the two function buttons on the front.

One advantage of the A6400 is that it has a magnesium alloy body and is dust and moisture resistant. The Z50 has magnesium top and front plates and Nikon says it is weather sealed albeit not at the same level as the Z full frame cameras. The A6100 is not weather sealed.

You will find a touch LCD screen on all three products.

The advantage of the Nikon solution is that you can mount a microphone or other accessories to the hot-shoe on top. However you can’t use the screen that way with a tripod, unlike the A6400 and A6100.

Concerning touch capabilities, the Z50 offers more controls. In addition to moving the focus point – which is something you can also do with the Sony cameras – you can also take a shot and navigate the menu.

The three cameras have an APS-C sensor (called DX on the Nikon).

The Sonys use the same 24.2MP chip whereas the Z50 has a 20.9MP chip. In real world use, this difference should not be a cause for concern.

All three mirrorless cameras use a hybrid autofocus system with contrast and phase detection points.

The Z50 uses 209 phase and contrast detection points present across 90% of the sensor area.

The A6100 and A6400 have 425 phase and contrast detection points, which is more than double the number the Nikon has. Sony also claims the world’s fastest acquisition time of 0.02s. Nikon hasn’t disclosed this information which probably means it is not as fast.

The Z50 has a minimum sensitivity of -4Ev when using the Low Light AF setting. In my experience with the Nikon Z6, this mode helps but the performance is much slower. I didn’t have enough time to verify how the Z50 behaves. The Sony cameras have a low light sensitivity of -2Ev.

The two Sonys have an advanced AF algorithm that includes Ai when Tracking is activated. It works in real time and the cameras analyse different levels of the image such as faces and eyes, brightness, depth and colours. After testing the A6400, we concluded that it is the best tracking mode we have ever reviewed on any mirrorless camera. It’s too early to judge the Z50, but it gave a me good impression at the launch event.

Eye detection autofocus has become a popular features and we have to thank Sony for pushing this technology to new levels of speed and accuracy. The A6100 and A6400 have the latest software which means Eye AF works in real time and with animals in addition to humans!

The Z50 also has Eye AF but it isn’t as advanced as the one found on the Sony cameras. In my brief time at the press event, the Nikon detected eyes very well but we have yet to see how accurate the performances is. And it only works with people, not animals.

The three cameras can record 4K video up to 30p and Full HD video up to 120p, with the option of having the slow motion footage prepared in camera directly.

The A6400 has two distinctive advantages. First it offers the possibility to record with Log and HDR gamma curves, which gives you the best dynamic range the sensor has to offer (colour grading in post is required). With the other cameras, you can use the normal profiles designed for stills.

Second, it can record for an unlimited time, even in 4K, bypassing the 30 minute limitation that is common on many other cameras (often because of European laws).

If you like time-lapses, then you’ll be glad to read that an intervalometer function is present on the three cameras.

The Nikon Z50 gives you an extra option: to produce a time-lapse as a 4K video file directly in camera. Note that the maximum length is 20 minutes.

The A6100 and A6400 are part of the Sony E-mount system. It started with APS-C nine years ago before expanding to full frame as well, which means there is a vast selection of lenses. More precisely, there are 19 lenses from Sony, and several from Sigma and other third-party manufacturers. Add to that the full frame selection and you’ll likely find what you need.

To be honest, the APS-C lens selection from Sony is not the best. There are many slow aperture zooms, and some of them are quite old as well. Recently the brand released its first 2.8 constant zoom, the 16-55mm, to show commitment to the APS-C lineup.

You can adapt DSLR lenses to the three cameras via adapters (FTZ for Nikon, several for Sony) but on compact products such as these, I normally wouldn’t bother.

The Z50 has been launched with the following retail prices:

The A6100 is the most affordable model at:

The A6400 can be found for the following prices:

As you can see, these prices are very similar. The A6100, despite being an entry level model, is close in price to the A6400 because the latter has been around for longer. I suspect that the A6100 will go down in price as well. As for the Nikon, we’ll just have to wait and see.

Please note that prices can vary over time due to special promotions and discounts and may also differ from country to country.

Nikon has been selling APS-C/DX cameras for years in DSLR format, so it should come as no surprise that have begun to do the same with their mirrorless system following the release of the first two full frame models.

The main advantage of the Z50 over its Sony competitors is the ergonomics. I already prefer the Nikon grip after just a half an hour of playing with a pre-production model.

I can’t really comment on image or video quality yet. The autofocus seemed pretty fast but what’s inside the A6100 and A6400 is the best you can find, so the Z50 really needs to excel.

Sony has the lens advantage for now, which is normal given how much younger the Z system is. And it’s going to take some time to change that.

For now, I can say pretty much the same thing I said when the Z6 and Z7 were released one year ago. The Z50 doesn’t bring anything new to the table. With time and following a number of in-depth tests, I’ve come to like the Z6 more than the A7 III. Perhaps the same will happen with the Z50. After all, ergonomics and design do matter.

Check price of the Nikon Z50 on:
B&H Photo