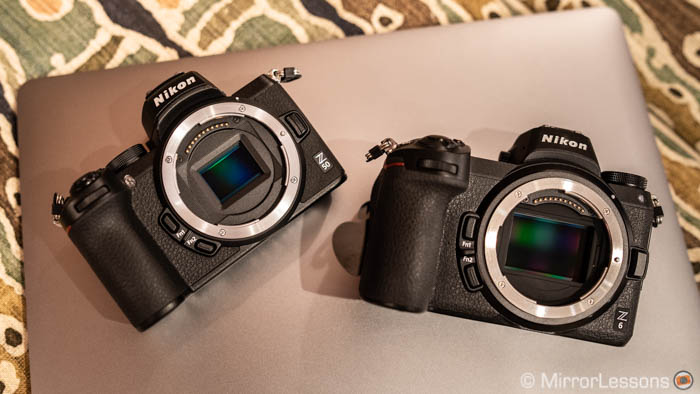 In 2018, Nikon launched its full-frame mirrorless system, starting with the Z6 and Z7. Now, one year on, the brand has announced its first APS-C mirrorless camera, the Z50. Since it uses the same Z-mount as the full-frame models, you can attach both the new full-frame lenses as well as the new DX lenses that Nikon has designed for this camera and its APS-C format.

It looks as if Nikon is aiming to grow the mirrorless Z system with both FX and DX products just as it did with its DSLR line-up. Considering that they’re both part of the same system, let’s see how the new Z50 compares with the Z6 full-frame camera!

Ethics statement: We own the Z6 and we saw a pre-production version of the Z50 at the UK press event. We were not asked to write anything about these products, nor were we provided with any sort of compensation. Within the article, there are affiliate links. If you buy something after clicking the link, we will receive a small commission. To know more about our ethics, you can visit our full disclosure page. Thank you!

The Z6 has a larger sensor equivalent to the 35mm format (full frame) with 24.5MP. It has a BSI structure (back-illuminated). Note that the camera also has a DX mode that allows you to save pictures with a resolution of around 10MP.

Both models have a low pass filter and use the 6th iteration Expeed image processor.

In our tests and comparison with the Sony A7 III, the Z6 proved an excellent performer in terms of dynamic range and sensitivity at high ISOs. Unfortunately we weren’t able to take any images with the pre-production Z50 so we have yet to see how it performs. That said, the specifications look promising for an APS-C sensor, especially concerning the ISO range, and the difference between 20MP and 24MP isn’t huge.

The Z50 has 209 hybrid points (phase and contrast detection) that work across 90% of the sensor area.

The Z6 has 273 points that cover 90% of the sensor surface as well, but keep in mind that the Z6 sensor is larger. In DX mode, the camera uses 91 points.

The minimum sensitivity is -2Ev or -4Ev when selecting Low Light AF. Bear in mind however that this mode slows down the acquisition time.

The Z6 did very well in our tests for sports and birds in flight (using DSLR lenses with the FTZ adapter). Eye AF also proved fast and reliable, even with fast apertures lenses such as the Nikkor AF-S 105mm 1.4. During my brief time with the Z50, I found that it focused very fast indoors with the 16-50mm kit lens. It was a bit slower with the 50-250mm DX lens.

The Z50 has a faster maximum shutter speed of 1/4000s, whereas the Z6 can go up to 1/8000s. They both have a silent mode (electronic shutter) and an auto shutter mode that switches automatically from mechanical to electronic first curtain shutter depending on the speed used.

The DX camera can shoot up to 11fps with AF and AE tracking with the H extended mode. With the normal H mode, the maximum speed is 5fps and you get a live view with blackouts. The Z6 is slightly faster and offers 12fps and 5.5fps respectively.

The buffer isn’t great on the Z6 – it slows down after 3 or 4s depending on the file format used. Official information about the Z50 buffer wasn’t disclosed. In my hands-on, it proved a bit deeper but further tests need to be performed.

The Z50 and Z6 can record 4K video up to 30fps using the entire width of the sensor. Once again the Z6 has a DX crop mode.

In Full HD, they can go up to 120fps and you can choose to record with sound, or have the slow motion result already created in camera.

Internal recording is 8-bit 4:2:0 on both but the Z6 can also output 10-bit 4:2:2 via HDMI output. Furthermore, a firmware update will bring 12-bit Prores RAW capabilities with the Ninja V external recorder. Note that it will be a paid upgrade and the camera will have to be sent to Nikon.

You can work with the Picture Controls (including the Flat profile) and special effects such as Bleached, Dramatic, and so on. The Z6 has an N-Log gamma curve for more dynamic range but once again you need an external recorder.

The Z50 has a more limited ISO range for video, starting from 100 and stopping at 25,600. The Z6 on the other hand can use the entire sensitivity range available for stills (but it displays a lot of noise at the highest values).

Concerning audio, the Z50 has a 3.5mm input, whereas the Z6 has a mic input and 3.5mm headphone output.

Finally, both cameras allow you to take 8MP JPGs while recording video and save any frame from 4K footage. A 4K Time-Lapse mode is also available.

The Z50 doesn’t feature in-body stabilisation. It relies on the optical VR of Nikkor lenses. Nikon explained during the presentation that the newly developed 16-50mm and 50-250mm DX lenses have a Dual Detect Optical VR mechanism. Data from a gyro sensor inside the body is analysed by the camera and combined with the optical VR to improve the result.

The Z6 features 5-axis stabilisation and can compensate up to five axes: X, Y, Roll, Pitch and Yaw. The biggest advantage over the Z50 is that stabilisation is available with any lens, including non VR lenses. With Nikkor DSLR lenses and the FTZ adapter, only three axes are used (yaw, pitch, and roll). In our tests, the Nikon camera did well, proving a little more reliable than the A7 III.

The Z6 can use the sensor shift mechanism for video too. Both cameras offer an Electronic VR option (digital stabilisation) which crops the sensor a little as a result.

The Z50 is visibly smaller than the Z6 as you can see from the images. It is lighter too:

Despite the smaller grip, I have to say that I found the Z50 very comfortable to hold. Surely with larger and heavier lenses the Z6 will be the better choice, but otherwise the Z50 is a nice camera to hold and the reduced weight is noticeable too.

The Z6 has a magnesium alloy body and is fully weather-sealed, whereas the Z50 has magnesium top and front plates. Nikon claims some degree of weatherproofing on the DX camera as well but it isn’t as advanced as the that of the Z6 and Z7.

We can notice some differences in the button layout. On top, the shooting mode dial is in a different position on the Z50 and it lacks the unlock button in the middle. The handy still / video switch has been moved from the rear on the Z6 to the top on the Z50.

On the rear, there is no AF-ON, DISP, Drive or Zoom buttons on the Z50. I’m glad that Nikon kept the ISO, exposure compensation and video buttons in the same location on top however. Also present are the same Fn buttons on the front near the mount.

Some of the missing buttons on the Z50 have been replaced by the touch interface on the right side of the LCD monitor.

The Z50 features a built-in flash with a Guide Number of 7/22. You can pop it out by pressing the dedicated button.

The Z6 doesn’t have a built-in flash and an external unit isn’t supplied in the box.

On the rear, both products have a 3.2-inch LCD display. The Z6 has more resolution once again (2.1M vs 1.04M dots) which will help with things like manual focus. Both screens are touch sensitive and allow you to take a picture, move the AF point, start tracking a subject and navigate through the menu. They’re very reactive and precise to use.

One thing you won’t find on the Z6 is the ability to tilt the screen all the way down to 180º for selfie shots. In that mode, all buttons are locked except for the shutter release and multi-selector. You can take a selfie by simply touching the screen.

Only the Z6 has a top LCD to check settings on the fly however.

The Z50 uses a single SD card slot which is compatible with the UHS-I standard. It’s a shame that Nikon didn’t make the effort to add UHS-II compatibility.

The Z6 uses the faster, thicker and more expensive XQD cards. There is one slot only, a choice that has drawn some criticism. I personally don’t mind the XQD card but given the more affordable price of SD cards, I feel it would have been a better choice to give the Z6 two SD slots instead.

The Z6 doesn’t have a great rating if we look at the official specifications (310 frames with the EVF, 380 when using the monitor). In my experience, you can easily get around 700 or 800 shots. The specs for the Z50 battery mention a lifespan of 300 shots, so expect it to be a bit lower than the Z6 unit.

Both cameras can be charged via USB (the Z6 has a Type C port whereas the Z50 uses a Micro 2.0 connection).

It’s too early to judge the Z50, but for now I have to admit that I don’t see anything exciting in comparison to what other brands have to offer in the same segment. That being said, it is the first affordable Nikon Z mirrorless camera, so it can certainly play an important role for the brand.

What I like the most for now is the nice design and how Nikon managed to make it almost as comfortable as the Z6 despite its reduced dimensions. This could be an attractive selling point. The autofocus seemed very fast and the sensor specifications are promising.

The Z6 has more advanced features, 5-axis stabilisation and of course, a 35mm format sensor. Naturally it is more expensive so if you’re interested in mirrorless cameras and have a soft spot for Nikon, the Z50 is a compelling proposition.

As things stand, I don’t find the two native DX lenses very exciting, especially given their slow aperture range (16-50mm f/3.5-6.3 and 50-250mm f/4.5-6.3). Yes, you can adapt DSLR lenses but the small size of the Z50 doesn’t really inspire me to do that. Plus after everything we’ve heard about the benefits of the large Z mount, I would have expected something a bit more audacious. At least they’re small, lightweight and come at an attractive price in kit with the camera, which means that you get a vast range of focal lengths for a reasonable cost.