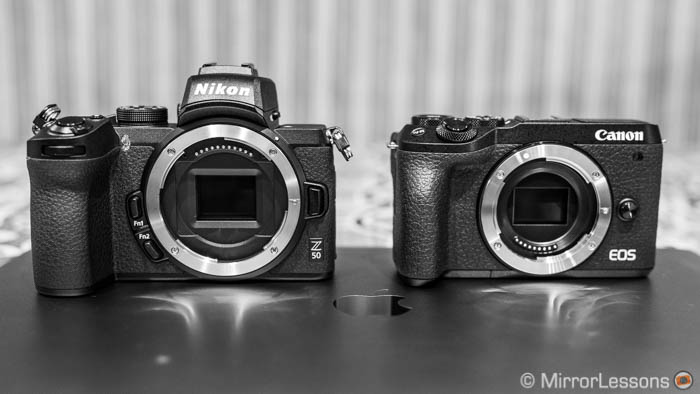 Canon and Nikon have been direct competitors for many years and have dominated the DSLR industry for decades. In 2018, they started to compete in the mirrorless segment (alongside Sony) with the release of their respective full frame systems.

This rivalry has now expanded to the mirrorless APS-C segment. The Canon EOS M line-up has been around for some time, whereas Nikon has only just joined the crowd with the release of the Z50.

In this article, we take a look at how Nikon’s first DX mirrorless camera compares to Canon’s latest EOS M release, the M6 mark II.

Ethics statement: The following is based on our hands-on with the Z50 at the press event and official information concerning the M6 II. We were not asked to write anything about these products, nor were we provided with any sort of compensation. Within the article, there are affiliate links. If you buy something after clicking the link, we will receive a small commission. To know more about our ethics, you can visit our full disclosure page. Thank you!

The Nikon Z50 is bigger than the M6 II. The front grip and the EVF that sticks out on top make the Nikon camera appear even larger.

The deeper grip of the Z50 is immediately noticeable and provides a more solid hold when working with the camera. The absence of an EVF allows the Canon to have more compact dimensions.

In terms of controls, both products have twin dials for the exposure and a shooting mode dial on top. The front dial is embedded into the front grip on the Nikon, whereas both dials are on the top plate of the Canon.

The M6 II has a nice AF/MF toggle on the rear but the Nikon has extra buttons including the two Fn keys on the front.

There is no weather sealing on the M6 II whereas Nikon claims some degree of dust and moisture resistance.

One of the major differences between these two models is the lack of an electronic viewfinder on the EOS M6 II. There is the optional EVF-DC2 EVF (0.39-in 2,360k dots) that attaches to the hot-shoe and it is included with the camera and kit lens bundle.

Both cameras feature an LCD screen with 180º tilting capabilities to facilitate selfie shooting and videos.

Nikon and Canon have chosen opposite directions for the mechanism: on the Z50, it tilts down whereas on the M6 II it swivels up.

The Z50 screen is useful because it allows you to attach an accessory to the hot-shoe such as a microphone. The downside however is that it becomes useless on a tripod.

Both screens are touch sensitive and allow you to perform a number of operations on the camera including moving the focus point and navigating the menu.

The Z50 features an APS-C CMOS sensor with 20.9MP. The M6 II has more resolution – 32.5MP to be precise – which is a significant difference. It is the first APS-C sensor to pass the 30MP cap.

The Z50 has 209 phase and contrast detection points. They cover approximately 90% of the sensor area.

Both cameras feature face and eye detection and can work in Single and Continuous autofocus.

The M6 II has a minimum sensitivity of -5Ev with a 1.4 aperture, which is similar to the -4Ev with a f2 aperture on the Z50. Note however that the latter works when activating the Low Light AF mode. Otherwise the default rating is -2Ev.

Both cameras can record 4K video up to 30fps without cropping the sensor.

In Full HD, they can record up to 120fps but the Canon does so without recording sound, disables the autofocus and applies a crop on the sensor.

The Z50 can record a 4K video in Time-Lapse mode.

The EOS M6 II can shoot up to 14fps with continuous autofocus, whereas the Z50 is a bit slower at 11fps.

The Canon has a Pre-burst mode that saves images before you fully depress the shutter button.

The M6 II uses UHS-II SD cards which have a faster writing speed than the UHS-I type of the Nikon Z50. The Canon can shoot at full speed for 54 frames in JPEG or 23 frames in RAW. The buffer specifications for the Z50 haven’t been disclosed.

Both cameras have a maximum speed of 1/4000s with the mechanical shutter. With the electronic shutter (silent mode) activated, the M6 II goes up to 1/16000s.

The Nikon Z-mount system began in 2018. Nikon launched the first two DX lenses (16-50mm f3.5-6.3 and the 50-250mm f4.5-6.3) with the Z50 so the choice is limited for now. Of course there is always the option of using full frame lenses designed for the Z-mount on the camera. The current selection includes fast primes that can work well on the Z50 too.

The EOS M series was launched in 2012 so the lens selection is much richer. One important thing to keep in mind however is that unlike Nikon, the mirrorless APS-C and full frame systems use different mounts. For this reason you cannot attach Canon’s RF lenses to the M6 II.

Both systems allow you to adapt DSLR lenses but keep in mind that on compact cameras such as these, the ergonomics will be somewhat compromised.

The Z50 was launched with the following retail prices:

The M6 II is available for:

The Z50 is a competitive product from Nikon whose ergonomics are its main selling point. The large front grip really makes a difference. The M6 II on the other hand is characterised by its more compact, modular design.

In terms of performance, the main difference is the sensor resolution. Although the 32MP chip on the M6 II may currently lead the way in terms of megapixel count, the Z50 20MP sensor might come out on top in the realm of low light performance.

One current advantage of the Canon is the wider selection of native lenses designed for the APS-C format. However you can’t attach the Canon RF full frame lenses to APS-C bodies, so in the long run, the Z-mount will offer more versatility because it is used for both formats (DX and FX).