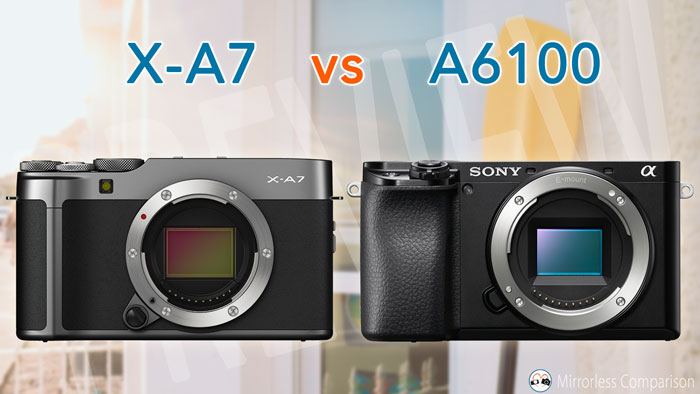 The Fujifilm X-A7 is the latest addition to the X-A line-up, Fujifilm’s entry level segment, and is also the most advanced iteration yet. Technically this model is a more logical competitor for the Sony A5100 which has more similar characteristics in terms of design (lack of EVF). However since that model is quite old now, we thought it would be more interesting to see how it stands up against the recently announced A6100 since they both target an amateur crowd.

Ethics statement: The information supplied in this article is based on official specs. We were not asked to write anything about these cameras, nor were we provided with any kind of compensation. Within the article, there are affiliate links. If you decided to buy something after clicking the link, we will receive a small commission. To know more about our ethics, you can visit our full disclosure page. Thank you!

One of the main differences between the two cameras is that the X-A7 lacks a built-in viewfinder, unlike the A6100 that features one on the left-hand side of the body.

The Sony EVF has a magnification of 0.7x and a modest resolution of 1,440k dots.

Another relevant difference concerns the rear LCD screen. The X-A7 may lack an EVF but it has a large 3.5-inch monitor with a fully articulated mechanism that allows you to open it to the side and rotate it up 180˚. The resolution is also really good at 2.7 million dots.

Both screens offer touch capabilities but here as well the Fuji camera goes a step further. Whereas on the Sony you mainly use it to move the AF point or activate AF tracking, on the X-A7 you can take a picture and adjust settings. In fact Fujifilm has designed a new interface that lets you adjust parameters very easily, in addition to previewing and comparing different effects such as the Film Simulation modes.

The dimensions are similar because the viewfinder on the A6100 doesn’t protrude from the rest of the body. The X-A7 is the lighter of the two, whereas the A6100 has more depth thanks to the larger front grip. This should make the camera more comfortable to hold.

The X-A7 goes on sale in four different colour variations: silver, dark silver, camel and mint green. The A6100 can be found in black or silver.

On top, we can notice twin dials on the X-A7, one of which has a function button in the middle. There is an On-Off button whereas the A6100 can be turned on or off with the classic switch around the shutter button.

On the rear, the large screen provides less space for buttons, and the X-A7 has the minimum required. The traditional D-Pad has been replaced by a joystick that can also be used to move the AF point. The Sony has more buttons but no joystick. Instead there is a common command wheel that can also be pressed in four directions.

The X-A7 features a similar AF system to the flagship X-T3 with 117 points that can be divided into 425 with certain settings. The software has been improved, as have the low light capabilities.

The A6100 features the same system found on the more expensive A6400 and A6600, which is one of the best we’ve ever tested. It uses 425 phase/contrast detection points and the real time tracking (which uses AI and machine learning technology) is impressive in terms of speed and accuracy. The Sony also has a faster acquisition time (0.02s).

Both cameras feature face and eye detection modes for the autofocus. The X-A7 has an improved algorithm that is supposed to be better than the one found on the X-T3 and X-T30. (I’m sure that a firmware upgrade for these two is coming soon.)

The A6100 has the latest real time Eye AF version which is the most reliable I’ve tested to date. Not only does it work really well for human beings, but it is very good for animals too!

The X-A7 doesn’t impress as far as continuous shooting speeds are concerned, with a maximum of 6fps and a slower 3fps option. It is not clear yet if continuous AF is available at all speeds or at 3fps only.

The A6100 can record in continuous mode up to 11fps with AE and AF tracking. Up to 8fps, it shows you a live view with blackouts. With the electronic shutter, the maximum speed is 8fps.

One advantage the X-A7 has over the A6100 is that it can increase the shutter speed to 1/32000 of a second with the electronic shutter. Both have a maximum value of 1/4000 with the mechanical shutter.

As mentioned in the introduction, both cameras can record 4K up to 30fps, and they do so with full pixel readout using the entire width of the sensor. This means they process about 6K of data that is then downsized to 4K to improve the quality (sharpness especially).

The Sony has another advantage when it comes to the recording limit. 4K and Full HD go up to 30 minutes per clip whereas on the X-A7, 4K is limited to 15min.

Both cameras have a microphone input but the X-A7 port is smaller (2.5mm vs 3.5mm on the Sony) which means you’ll need an adapter.

There isn’t a lot to say about the sensors without side by side images. They both have the same resolution but the ISO range is different.

Similar to Live Composite on Olympus cameras, the Light Trail mode on the X-A7 allows you to record multiple frames continuously while only saving the brightest pixels. This becomes useful to capture scenes such as star trails or even fireworks.

Sony has a similar version available for download from its PlayMemories app store, where you can add more functionalities to your camera (often for a small price). However the latest models have lost compatibility with these apps and the A6100 is among them.

The Fujifilm X-A7 is a welcome improvement to the X-A series. I’m glad to finally see good video capabilities, and hopefully the updated autofocus won’t disappoint. It lacks a viewfinder, but the large screen and multiple touch screen gestures could be appealing for beginners who want to start to experiment more seriously with stills and video.

In addition to the small but useful built-in EVF, the a6100 has one of the best autofocus systems there is and the faster burst speeds certainly make the camera more interesting for action.