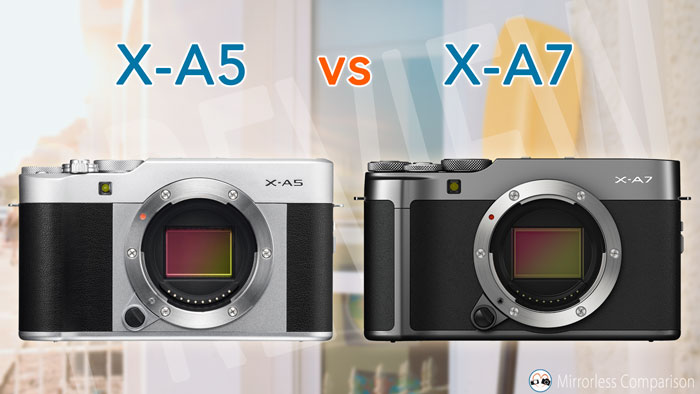 The X-A series is the entry level range in the Fujifilm X-mount system. Their elegant and simplistic design targets beginners and amateurs looking for a straightforward camera. Unfortunately the series has long suffered from poor video specifications and slow autofocus capabilities – that is, until now.

The new X-A7 might be the first camera in the line-up capable of raising the series to new heights. The video specifications are (finally!) at the minimum you would expect from a camera in 2019, and the improved autofocus system looks very good on paper. Is the X-A7 a worthy upgrade? Let’s see how it compares to its predecessor, the X-A5.

Ethics statement: The information supplied in this article is based on our direct experience with the X-A5 and official specifications. We were not asked to write anything about these cameras, nor were we provided with any kind of compensation. Within the article, there are affiliate links. If you decided to buy something after clicking the link, we will receive a small commission. To know more about our ethics, you can visit our full disclosure page. Thank you!

The X-A5 and X-A7 feature an APS-C sensor with a resolution of 24.2 megapixels, but the chip found inside the X-A7 has been re-designed.

In addition to having more phase detection points (see second chapter below), it uses copper wiring rather than aluminium which improves speed and noise performance while allowing for a thinner design that improves light gathering.

The native ISO range goes from 200 to 12800 on both cameras, with expanded values up to 51200 ISO. With the extended values, the X-A5 only produces JPGs whereas it is unclear if the X-A7 can also record in RAW format.

Both cameras use a hybrid system with phase and contrast detection. The X-A5 has a maximum of 91 phase detection points, whereas the X-A7 has a total of 117 areas that can be subdivided into 425 with certain settings (like the X-T3). Having more points increases the precision of the autofocus, also because they cover a larger portion of the sensor.

The X-A7 comes with an updated face and eye detection algorithm that is supposed to be the most advanced to date from Fujifilm. Performance in low light has also been improved.

The X-A5 didn’t impress us when we tested it last year. It struggled more than we would have expected. The new AF system and the improved algorithm should be good news for the X-A7. Perhaps the performance of this line-up can finally come a bit closer to that employed by Fuji’s X-Trans sensor cameras.

The X-A5 was the first camera in the X-A series to offer 4K video recording, but at a disappointing 15fps. The quality, while decent, didn’t impress us either and the maximum recording time was just 5 minutes.

The X-A7 brings the maximum frame rate up to 30fps, which means you can now record at conventional speeds. Furthermore, the camera does full pixel readout using the entire width of the sensor which should improve the footage quality thanks to crisper details. You can record 4K continuously for up to 15 minutes.

The faster readout speed of the sensor should reduce rolling shutter compared to the X-A5.

Fujifilm has included a new mode called Countdown Video that allows you to record a short clip of 15, 30 or 60 seconds and upload it quickly to social media.

The X-A7 is a more interesting camera for video because it is the only one with a microphone input. It is a 2.5mm mini jack type, which means you’ll likely need a 2.5mm to 3.5mm adapter to use common microphones. Still, it’s better than nothing!

Another difference is the USB port: the X-A7 uses the model Type C standard whereas the X-A5 has the older micro USB 2.0. Before you get too excited though, the X-A7 USB port speed is 2.0.

Fujifilm has tried more than once to come up with alternative solutions for tilting/flipping rear monitors. With the X-A7, they’ve decided to adopt the standard solution seen on many cameras for many years: a fully articulated LCD that swings out to the side and rotates up 180˚. The one on the X-A5 tilts up and down only (up to 180˚).

The screen is also bigger at 3.5 inches, has a stunning resolution of 2.7M dots and a 16:9 aspect ration which suits video recording well (you’ll get black bars on the left and right when shooting stills since photos have a 3:2 ratio).

Both cameras have a touch sensitive screen that allows you to perform different operations including taking a picture or moving the AF point. You have more possibilities on the X-A7 thanks to the addition of more touch screen controls, including the new Smart Menu.

The Smart Menu of the X-A7 is a new GIU interface that allows you to select settings on the touch screen and preview them in real time. You can change the picture profile (film simulation mode), the depth of field (background blur), the brightness (exposure) and other things. It is a clear reminder of who this camera is targeting.

The X-A7 features a new Bright Mode that you can find when the camera is in the Advanced SR Auto mode. The camera picks the ideal settings to automatically create HDR-like images, or images with bright and vivid colours.

Light Trail is a new addition to the Scene shooting modes of the X-A7. It lets you capture light trails and see the effect in real time. Useful applications can be car headlights, star trails or fireworks.

The X-A7 has received a few design upgrades in comparison to the X-A5. Dimension wise, they’re nearly identical but the X-A7 has been made even lighter:

On top, there is a new on/off button that substitutes the switch around the shutter release button. In its place, there is a front dial for better control of exposure settings. The rear dial also has a customisable button at the centre.

On the rear, the button layout has been reorganised and because the screen is bigger, Fujifilm opted for an 8-way joystick rather than the conventional 4-way D-Pad.

The X-A5 can be found in a silver, brown or pink finish. The new X-A7 has a new set of colours that includes silver, dark silver, camel and mint green.

The Fujifilm X-A7 is an entry level camera worth considering for a few reasons: in addition to the good looking design, it has a large touch screen with what looks like a very user-friendly interface. The quality of the 4K video seems really good and the improved autofocus is a welcome tweak.

The X-A5 is less expensive and its price might decrease even further before it eventually gets discontinued. If you’re looking for a less expensive option for casual use, there is no reason not to consider it. Otherwise, the X-A7 is most certainly the better proposition.