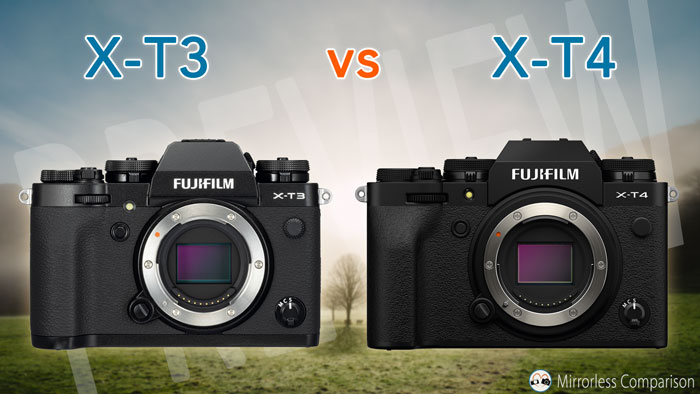 Over the years, Fujifilm has gone from catching up in various departments (autofocus, video, overall speed) to equalling if not surpassing some of its direct competitors.

The new X-T4 follows the same path. It fixes some of the last things that needed to be addressed (IBIS, battery) and further improves the performance, which makes this new model one of the most exciting and complete APS-C cameras you can find today.

It doesn’t replace the X-T3 (for now), which means that its predecessor remains on the market at a lower price. Let’s see how they compare.

Ethics statement: the information shared in this article is based on official specifications and our personal experience with the X-T3. We were not asked to write anything about these cameras, nor were we provided any compensation of any kind. Within the article, there are affiliate links. If you decided to buy something after clicking the link, we will receive a small commission. To know more about our ethics, you can visit our full disclosure page. Thank you!

This is the biggest upgrade to the X-T series. Up until now, Fujifilm had produced only one camera with in-body stabilisation, the X-H1. At the time, their argument for the bigger body was to accommodate the space needed for the sensor shift unit.

Less than two years later, the X-T4 incorporates a smaller and lighter unit (30% decrease in size and 20% less weight according to Fujifilm). Instead of springs, the new mechanism works with magnetic force and has an improved structure to absorb shock. The new gyro sensor is supposed to improved the detection accuracy by 8 times in comparison to the X-H1.

Compensation, which works on 5 axes, works up to 6.5 stops with a good number of Fujinon XF lenses (18 out of 29 according to Fujifilm). With the other lenses, the compensation is 5Ev.

The internal image stabilisation works for video too and you can add software stabilisation (electronic), which Fuji calls DIS (Digital Image Stabilisation). The field of view is cropped (1.1x), but the degree of stabilisation is improved. There is also a new IS Boost mode that is designed to stabilise the image for fixed shots when you’re not using a tripod.

The X-T3, as you may already know, doesn’t have any sort of stabilisation. You have to rely on lenses with OIS, or external supports.

Fujifilm has used the same battery type, the NP-W126, for a long time. It then introduced the S variant (NP-W126S) that improved the performance a little, but it remained inferior to the better batteries seen in other systems (Sony and Olympus).

The new battery introduced with the X-T4 (NP-W235) has a higher amperage of 2350mAh, which is almost double the capacity of the previous one (1260mAh).

By CIPA standards, the X-T3 can take around 390 shots with a fully charged battery, whereas the X-T4 can manage around 500 shots. In the real world, these numbers can be higher of course but it definitely looks like a good improvement.

In addition to the Normal and Boost modes, Fuji has added a new Economy mode that can save even more power.

There is a new battery grip designed for the new camera, the VG-XT4, to accommodate two NP-W235 batteries.

Although the stabilisation unit is smaller than the one found in the X-H1, Fujifilm still had to make some room for it in comparison to the X-T3, and that led to a small increase in size and weight. But that also allowed them to include a bigger battery, so overall I would say it is for the best.

As you can see below, the width and weight have increased a little, and the new camera is thicker as well.

The grip is a bit bigger, and so the button and dial layout appears to be the same. The only difference is how some buttons are marked on the body, and the AEL and Q buttons have switched positions.

The sub-dial under the shutter speed dial doesn’t control metering anymore, but allows you to switch from still to video mode which is handy. The rear command dial has a slightly different design too.

On the rear, the eyecup on the X-T4 has a locking mechanism so that it won’t dislodge itself.

The X-T3 has an unusual 3-way tilting mechanism: in addition to tilting up and down, it can be oriented by about 70˚ when working in vertical orientation.

The rear monitor on the X-T4 has a multi-angle mechanism, which is found on many other cameras and gives you more possibilities including a 180˚ rotation on the side.

Both screens are touch sensitive and allow you to perform different operations such as taking a shot, moving the focus point, selecting specific settings and so on.

Fujifilm has added new Boost options that allow you to prioritise the refresh rate, the resolution or boost the brightness when working in low light. It works for the EVF too.

The X-T4 features a new shutter mechanism that is rated at 300,000 actuations and has a quieter sound. Fujifilm never disclosed the one on the X-T3 (probably 200,000 but it’s a guess).

The X-T4 shutter has a new design that allows it to be faster, reaching a maximum speed of 15fps in continuous mode (with AF/AE tracking). The shutter lag is 0.035 seconds. (Imaging Resource calculated the one on the X-T3 at 0.051s).

With the mechanical shutter, the X-T3 can go as fast as 11fps. If you want a live view (with blackouts), you need to decrease the speed to 5fps, whereas the X-T4 can do this at 8fps.

The X-T4 has a new algorithm where in addition to distance, color and shape data are also analysed to improve accuracy. Tracking has been improved and Fujifilm says that the success rate should be two times more accurate in comparison to the X-T3. Low light sensitivity is -6Ev versus -3Ev on the X-T3.

The speed has increased, with the company claiming a locking speed of 0.02s, which is the same world’s fastest rating claimed by Sony for the A6600. Face and Eye detection have the same tweaks introduced to X-Pro3 and given to the X-T3 via firmware.

The technology inside the cameras is the same: they both have a hybrid system with contrast and phase detection points (117 or 425 areas depending on the settings used). This means that the X-T3 could receive some of the new software improvements via firmware later on. (Fingers crossed!)

The X-T4 introduces a new film simulation mode (colour profile) called Eterna Bleach Bypass, which emulates a traditional processing method for silver halide film. It is low in saturation but high in contrast.

There is also the Classic Neg profile introduced with the X-Pro3 and the Color Chrome Effect Blue mode (the X-T3 has the normal Chrome Effect).

Other tweaks have been added for other settings. For example, highlights and shadows can be controlled in 1/2 steps instead of 1, and White Balance has a new White Priority and Ambience priority depending on the type of artificial light you’re working with. Then you’ll find Tone Curve and Clarity, which are new settings introduced with the X-Pro3.

Finally, a Compressed option has been added to the RAW settings in addition to uncompressed and lossless compressed found on the X-T3. Furthermore, with the built-in RAW Converter, you can export 8-bit and 16-bit TIFF files as well as JPGs.

Other improvements on the new camera include the possibility to record video on both cards at the same time, and the F-Log View Assist which allows you to display normal contrast and colours when recording with Log (F-Log is available on the X-T3 as well).

Another interesting new option allows you to even the crop applied to the sensor for all the various video modes. This means that a 1.29x crop is applied regardless of the video settings, so that you can have a constant field of view when recording 4K/30p and slow motion video for example.

Both have a 3.5mm audio input that can be used for microphones. On the X-T4 it doubles as a line input for other types of audio equipment.

Note that there isn’t a 3.5mm headphone output on the X-T4, but you can use a USB-C adapter instead (included in the box). It seems that Fujifilm is adopting this solution more and more after first introducing it on the X-T30.

There are no drastic changes to the menu system, but here as well we find a few tweaks that just like the button layout, facilitate hybrid shooting.

The most important change is that now, stills and video have a separate menu depending on the position of the switch.

Note that the X-T3 has a similar setting called Movie Silent Control that allows you to control all the settings via the touch screen.

The X-T4 is a complete camera in many ways, with the list of negatives and missing features becoming shorter and shorter with every new iteration. But whether you choose the predecessor or the successor ultimately depends on what you plan to shoot.

Photographers who have managed to live without in-body image stabilisation or a bigger battery won’t find the new camera revolutionary, meaning that they can probably skip the upgrade and keep their money. The sensor is the same, the image processor is the same, and some of the software upgrades on the X-T4 could make their way to the X-T3 via firmware update at some point.

Those looking for a powerful mirrorless camera at an attractive price should also consider the X-T3: not only is it less expensive now, but its price could continue to decrease thanks to the usual instant rebates, cash-backs and other deals of that kind.

However if you’re in the market for a new camera and are looking for a complete solution that can give more expensive products a run for their money, then you should give the X-T4 some serious thought. It is still quite compact and provides everything you could possibly need, and then some, in terms of performance and quality.

Check price of the Fujifilm X-T4 on
B&H Photo