Are you looking for X-T4 vs X-H1? Then head on over to our latest preview!

When the flagship Fujifilm X-H1 arrived on the scene in 2018, it differentiated itself from all other X Series models by becoming the first Fujifilm camera to incorporate 5-axis in-body stabilisation. Not even the X-T3, which was just recently announced, inherited this feature even though it is relatively commonplace on cameras from other mirrorless brands, including entry-level models.

The X-H1 also features a larger body with a more substantial grip and additional video settings, making it the most advanced model designed by Fujifilm for video-makers … until now! The X-T3 is a stunning step forward for movie recording not only within the X-Series but the mirrorless market in general. Add to this a new sensor and autofocus system and it soon becomes clear that the X-T3 is the more advanced camera. If you’re curious to find out more, keep on reading as there’s a lot to cover!

As we mentioned in the introduction, the X-H1 is the first and only X-Series camera so far to feature 5-axis in-body stabilisation. It works on its own with non-stabilised lenses or in conjunction with the OIS of Fujinon lenses.

The maximum compensation is 5Ev by CIPA standards but the performance will vary from lens to lens. For example Fujifilm claims 5.5Ev of compensation with the XF 35mm f1.4 (and we can confirm that it did perform better with this lens in our tests) whereas the XF 18-55mm will only provide 3.5Ev. 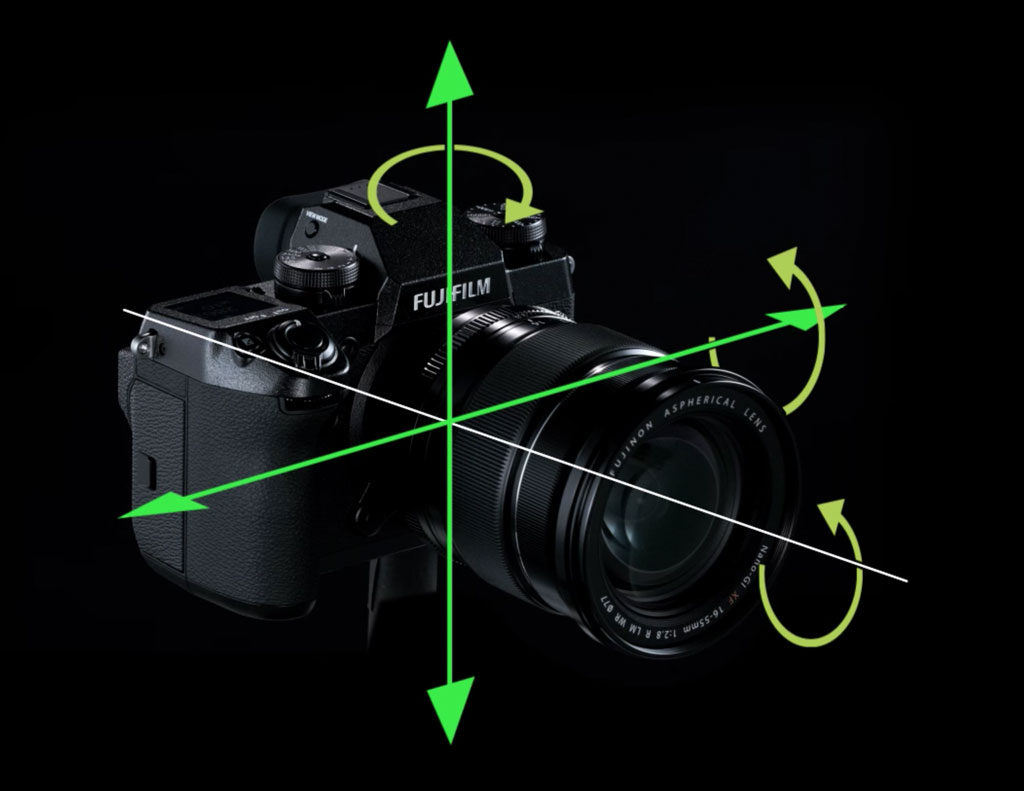 With adapted lenses that lack electronic control or the MCEX-11/MCEX-16 macro extension tubes, three axes are used (pitch, yaw, roll) and the focal length must be inserted into the menu.

Despite being announced after the X-H1, the X-T3 hasn’t inherited its in-body stabilisation system. For now it seems that Fujifilm is keeping this technology exclusive to the X-H1, perhaps because it requires a larger body than the X-T camera. Therefore to have any kind of stabilisation on the X-T3, you must use Fujinon OIS lenses or a tripod to achieve good results at slow shutter speeds.

Despite being the flagship, the X-H1 houses the older 24.3MP X-Trans III sensor whereas the X-T3 has the brand new X-Trans IV sensor with 26.1MP and BSI (backside illumination) technology. According to Fujifilm, sensor readout is now 1.5x faster than previous models which should improve rolling shutter amongst other things. 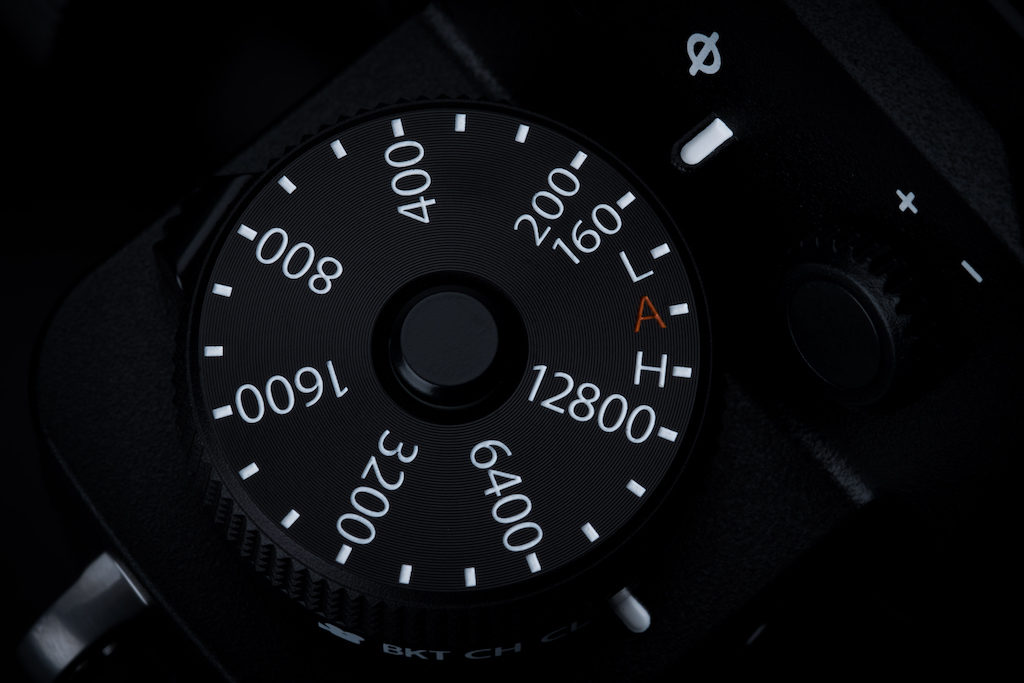 The X-H1 finds itself on the back foot in the autofocus department too, as the X-T3 comes equipped with the most advanced version of Fujifilm’s hybrid autofocus system to date.

Unlike the X-H1 whose phase detection pixels are confined to the central portion of the sensor, the X-T3 offers full coverage (99% of the width and height). Phase detection autofocus in low light is also two stops more sensitive than the X-H1 (-3EV vs -1EV). The powerful X Processor 4 also allows the X-T3 to refocus and meter 1.5x more frequently than the X-H1.

Face and eye detection are twice as effective on the new model, with the latter being accessible in C-AF and movie mode. This is a welcome change as we sometimes found this function unreliable on the X-H1 and other previous Fujifilm models.

Both models are complete with Fujifilm’s AF-C Custom Settings which allow you to customise the behaviour of the autofocus system according to the movement of the subject. There are five presets and a sixth one that can be configured manually with three different settings.

Our experience with the X-H1 didn’t reveal any major improvements to the autofocus performance in comparison to the X-T2 and other X-Trans III cameras, mainly because Fujifilm put them all on the same level via firmware updates. The X-T3 brings more significant improvements in this department.

The X-H1 is able to shoot up to 8fps (mechanical shutter) or 14fps (electronic shutter). By attaching the VPB-XH1 battery grip, you can push the mechanical speed up to 11fps.

With the new camera you can shoot in continuous mode using the electronic shutter while maintaining live view. Simply put, the X-T3 becomes the second mirrorless camera after the Sony A9 to have enough power to maintain live view in the EVF/LCD while shooting at high speeds. Of course in this case we’re talking about a smaller sensor but it is nevertheless interesting to see that more than one brand is now working on this feature.

Finally, we come to the new pre-capture mode which isn’t dissimilar from the Pre-Burst mode of the Lumix G9 or the Pro Capture mode of the Olympus OM-D E-M1 II. When you half-press the shutter button, the camera preloads frames to the buffer memory but it will only save the most recent images when you fully depress the button. This means that even if you have a delayed reaction to a fleeting moment, such as a bird taking off or a bee leaving a flower, you should still be able to capture the action.

One of the most measurable differences between the X-T3 and X-H1 is the enlarged grip on the flagship model, whose purpose is to facilitate the use of large telephoto lenses. This grip is partially responsible for extra size and weight:

The X-H1 also sports a more robust chassis which is 25% thicker than that of the X-T3 and features scratch resistance equivalent to 8H surface hardness.

Only the X-H1 makes room for a monochrome display on the top plate which shows all the most important settings currently in use, while only the X-T3 has a USB 3.1 Type C port.

The X-H1 may be the flagship Fujifilm camera but the new X-T3 actually has far better video specifications. It can record at a higher frame rate in 4K with a faster bitrate and more choice when it comes to codecs and the types of compression. It also becomes the first mirrorless camera (actually the first camera, period) to offer 4K/60p at 10-bit. To make it easier to see the differences, take look at the two columns below:

The X-T3 offers internal 10-bit recording, which means it records 64 times more colour depth than the X-T2 in 8-bit. Now this doesn’t necessarily mean that you’re going to see better colours on your everyday monitor but it offers more leeway for colour correction in post. The main advantage of All-Intra compression is that it encodes each frame individually and requires less power to be decoded on your computer while editing.

To record 4K video, the X-H1 crops the sensor by approximately 1.17x which means your field of view is narrower. The X-T3 performs a marginally larger crop of 1.18x when recording 4K at 50 or 60fps, but uses the entire width of the sensor up to 30p.

In 1080p, both can record up to 60fps or 120fps in High Speed mode to offer better slow motion footage. In this case as well, the X-T3 uses a higher bitrate of 200Mbps (vs 100Mbps). There is a more significant crop of 1.29x to preserve better quality. Indeed the 120fps mode of the X-H1 didn’t impress me much due to the drop in sharpness and excessive aliasing.

There is also a difference concerning the maximum duration per clip:

Both cameras feature the Eternal film simulation mode (designed for Video) and are able to record Fujifilm’s F-Log flat profile internally. A firmware update due in 2018 promises hybrid log gamma support for the X-T3. F-Log on the new camera has a minimum ISO of 640 (versus 800 on the X-T2).

Below: a video shot with the X-H1 and the Eterna profile

Other differences found on the X-T3 include the addition of zebra pattern, improved rolling shutter and AF performance, magnification during video capture, face detection in 4K and up to 12 stops of dynamic range when using the DR400% setting at ISO 640.

Both cameras have a silent mode feature that disables buttons and dials, allowing you to operate the camera silently by using the touch screen. It also gives you the opportunity to use different settings for stills and video.

Two firsts for the X-Series are the Monochrome Adjustment function, which tweaks the warm and cool tones of the Monochrome and Acros film simulation modes, and Colour Chrome Effect, which was first introduced on the medium format GFX 50s. The latter is based on Fortia reversal film and gives tonality to high contrast images.

There are a couple of additional features found on the X-T3 that aren’t available on the X-H1, though nothing precludes them from coming via firmware update later on.

First we have Digital Microprism, which is a new manual focus assist that simulates focusing through an old-school SLR viewfinder.

Second is the Night Vision mode whose job is to help preserve your night-adapted vision by turning the background of the LCD grey and the text red.

The third option is the new Sports Finder mode. The camera crops the sensor by approximately 1.25x which gives you 16.6MP of resolution to work with. The EVF keeps the native view of the sensor but displays bright frames to show you the limit of the cropped area, which means you can actually see what’s happening outside the scene and anticipate the action better.

A small difference worth mentioning is the battery life. Although both use the NP-126S battery, the X-T3 can take 390 shots on one charge whereas the X-H1 delivers a less impressive result of 310 shots (CIPA standards).

When shooting in 4K, the X-H1 has enough juice to last 35 minutes whereas the X-T3 can squeeze in an extra five. However you can extend the battery life of either camera by attaching the vertical battery grip.

Of course CIPA ratings only give a rough idea of the difference. In the real world, it is almost always possible to take more than that on a single charge, though the X-T3’s video specifications may be a significant drain on the battery power.

Although the X-H1 is officially the flagship camera in Fujifilm’s range of X Series cameras, the X-T3 brings many new and superior features to the table such as 4K recording at 60fps/10-bit, a brand new sensor with BSI technology, and improved autofocus and burst capabilities with the electronic shutter.

The official retail price may be higher but it is now possible to find the X-H1 at a fairly similar price to the X-T3. In a way, it becomes difficult to recommend the X-H1 over the new model given the latter’s advanced specifications, but let’s not forget that 5-axis in-body stabilisation is a very useful feature and some of you may prefer the larger and more prominent grip as well.

Once thing is easy enough to say: the X-T3 looks like a very promising camera for video and may be the one that puts Fujifilm in a much more credible position to compete against Sony and Panasonic.

Check the price of the X-T3 on

Check the price of the X-H1 on