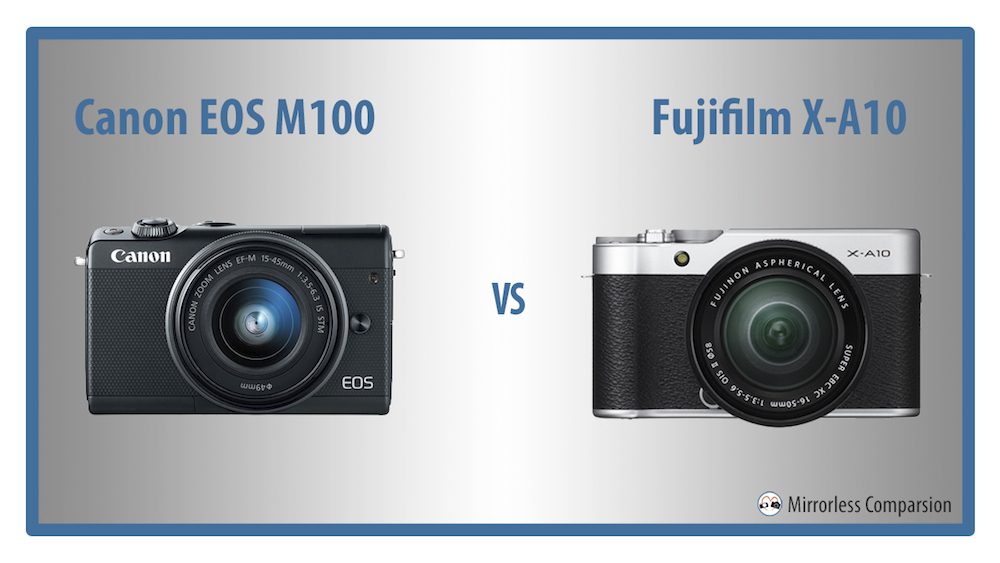 Canon and Fujifilm are two of the most well-known camera brands on the market today, so it is little wonder that potential users want to find out more about the differences between their competing models before taking the plunge.

In this comparison preview, we’re going to be looking at how two entry-level models from each system compare. On one hand, we have the brand new Canon EOS M100 and on the other, the Fujifilm X-A10, the most affordable camera in the X series range. Let’s get started!

Ethics statement: The information supplied in this article is based on official specifications and our personal experience with Fujifilm cameras. If we get the chance to test the two cameras side-by-side, we will publish a full comparison. We were not asked to write anything about these cameras, nor were we provided with any sort of compensation. Within the article, there are affiliate links. If you decided to buy something after clicking the link, we will receive a small commission. To know more about our ethics, you can visit our full disclosure page. Thank you!

Although both the M100 and X-A10 use a Bayer-type APS-C CMOS sensor, the resolution is higher on the Canon camera.

The M100 is the first entry-level mirrorless model from Canon to receive a 24.2MP CMOS chip. Combined with the new DIGIC 7 processor, it promises better image quality, low light performance and AF speed than its predecessor, the M10.

The X-A10 inherits the same 16MP chip as the X-A2. The difference in resolution is likely to interest you more if you frequently crop your images or make large prints.

An important difference between the M100 and X-A10 concerns their respective autofocus systems.

Canon’s Dual Pixel CMOS AF system, which relies on phase detection autofocus, has been lauded as one of the best of its kind for both still shooting and video. In addition to having an AF area of 49 points, there is also an AF Zone with 9 points. Face/Eye detection and Tracking are also available.

The AF system of the X-A10 is based on contrast detection and is decidedly less advanced. It can handle slow moving or static subjects but struggles more when tracking fast and unpredictable action. You can select between Single and Multi modes, and like the M100, it features 49 AF points across the frame and Face/Eye detection.

Related to the topic of autofocus are the continuous shooting speeds and buffer depth.

Truth be told, the difference in speed isn’t all that significant. The M100 is a little faster, capable of shooting up to 6.1fps with one-shot AF or 4fps with Servo AF while the X-A10 can manage up to 6fps in High mode or 3fps in Low mode regardless of the AF mode you choose.

As for the buffer, the Canon is definitely more capable. It can fire off 89 JPG/21 RAW frames at its fastest speed as opposed to just 20 JPG frames with the Fujifilm. At their slowest speeds, however, they can both shoot indefinitely.

A curious omission from the EOS M100 is the electronic shutter. A commonplace feature on most of today’s mirrorless cameras, it is useful if you want to remain discreet or use large apertures in bright daylight.

Both cameras can shoot at a maximum speed of 1/4000s with the mechanical shutter.

Whereas the M100’s screen is touch sensitive and can be used to perform numerous actions such as changing the AF point, taking a shot, scrolling through and selecting items in the menu, zooming and more, the X-A10 has been saddled with a non-touch LCD. This isn’t a surprise, however, as the majority of Fujifilm cameras – including the flagship models – lack a touch sensitive monitor.

The way in which the two screens tilt is identical: both can be tilted down 45° for low-angle photography and up 180° for selfie shooting.

The X-A10 has a plastic build and retro appearance whereas the body of the M100 is made of polycarbone, which is both tough and lightweight. The difference is size and weight is as follows:

Neither model is weather-sealed, so it is best to protect them in inclement weather conditions.

Turning to the front, we can see that the X-A10 has a pronounced grip which contrasts with the flat profile of the M100. However, both have a thumb rest on the rear.

Physical controls are fairly sparse on both models. The ones they have in common are a control dial on top for exposure, a dedicated movie button, a playback button, and a button to enter the menu. Four of the buttons on the M100 are customisable as opposed to just one on the X-A10.

In the place of the PSAM Mode dial found on the X-A10, the M100 has a dial to switch between stills/video/Auto.

Because both models lack a viewfinder, you have to rely on the rear monitor for all your shooting, which shouldn’t be too problematic if you are accustomed to shooting images with a smart device.

Neither the M100 nor the X-A10 has a hot shoe, so using an external viewfinder or speed light on these cameras is out of the question.

Finally, the M100 comes in three colours (black, silver, white) while the X-A10 is only available in a black/silver combination.

Neither camera is particularly suited to video work but it is worth pointing out the differences in their capabilities nonetheless.

The M100 can shoot in Full HD at a maximum of 60fps while the X-A10 is limited to 30fps. The continuous recording time of the Canon camera is just short of 60 minutes whereas the Fujifilm is limited to 14 minutes.

A very small difference between the M100 and X-A10 is that the M100 uses 3-axis digital stabilisation for video recording, whereas the X-A10 completely relies on the optical stabilisation of its lenses.

The battery life of the Fujifilm camera better than the Canon (410 vs 295 on one charge) but if you switch the Canon into Eco mode, it matches the performance of its competitor.

As far as mirrorless cameras go, it is difficult to find a more affordable model than the Fujifilm X-A10. Purchased with the 16-50mm kit zoom, it will only set you back around $500, which is $100 less than the EOS M100.

Summarising what we’ve seen, it is safe to say that the Fujifilm X-A10 is the less advanced model of the two. Not only is the resolution of its sensor lower than the M100, but it also has a less robust construction, lacks a touch sensitive screen and uses a slower contrast detection AF system.

The appeal of the Fujifilm camera lies in its low price point. In fact, it is one of the most affordable mirrorless cameras on the market today if we exclude discount bundles and second-hand products.

Another alternative to the M100 and X-A10 is the slightly more expensive X-A3 (see our full comparison between these two Fujifilm cameras here). It too is an entry-level model but could be considered the more logical competitor for the M100 due to its 24MP sensor, slightly more advanced contrast detection AF system, hot shoe, touch sensitive screen and identical price point of $600.

Check price of the Fujifilm X-A3 on