You are here: Home / Preview / The 8 Main Differences Between the Fujifilm X-A3 and X-A10 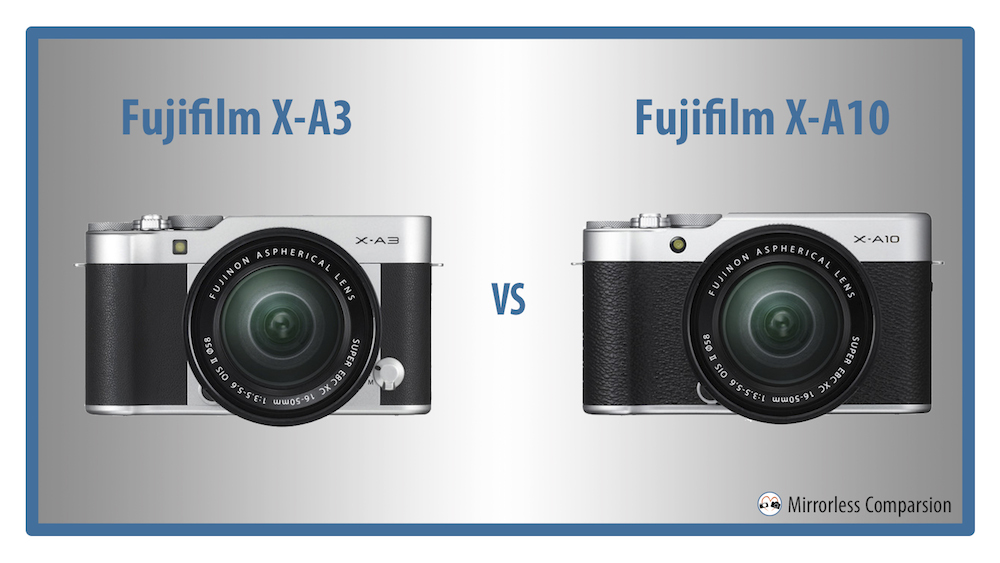 Earlier this year, Fujifilm announced the X-A3, the third member of the entry-level X-A family. Its announcement was expected, as over a year and a half had elapsed since the release of the X-A2.

What wasn’t expected was the announcement of the Fujifilm X-A10 only a few months later. Though it is also part of the X-A family, the extra zero places it a step below the other models, effectively making it Fujifilm’s most basic and affordable interchangeable lens model thus far.

If you are wondering how these two entry-level models differ, look no further than this comparison preview. We’ve picked out all the main differences, both big and small, so you don’t have to!

Ethics statement: The information supplied in this article is based upon the official specifications found on the Fujifilm website and our personal experience with Fujifilm cameras. We were not asked to write anything about these cameras, nor were we provided any compensation of any kind. Within the article, there are affiliate links. If you decided to buy something after clicking the link, we will receive a small commission. To know more about our ethics, you can visit our full disclosure page. Thank you!

The first difference regards the sensor resolution. Although both cameras have a Bayer APS-C sensor, the X-A3’s has a resolution of 24MP while the X-A10’s is only 16MP. The difference isn’t enormous in real-world terms but the extra resolution of the X-A3 will give you more leeway if you wish to make large prints or crop in post-production.

Although the continuous shooting capabilities of the two cameras are identical, the X-A10 has a slight advantage in terms of buffer depth according to the official specifications.

Both cameras have a contrast detection autofocus system but there are some differences concerning the AF points and AF modes.

The X-A3 has 77 AF areas. You can use the Single Point with five different sizes, Zone AF with three optional grids (3×3 / 5×5 / 7×7) and the Wide/Tracking mode available on the 9 central points.

The X-A10 has 49 AF points and you can only switch between Single and Multi modes.

Both cameras come with face and eye detection which is useful for selfies and group shots.

Film Simulation Modes is what Fujifilm calls its series of colour and monochrome profiles. They are widely recognised as some of the most attractive camera profiles you can find on the market.

On the X-A10, these modes are limited to Provia, Velvia, Astia, Classic Chrome, Monochrome and Sepia.

However, only the X-A3 offers touch sensitivity, which can be handy if you want to take a picture, change the AF point/focus area, or digitally zoom on the fly.

6. Body design and ease of use

Placing the two cameras side-by-side reveals a series of minor differences in design.

The most obvious difference concerns the various colour combinations. The X-A3 is available in three variations: brown/silver, black/silver and pink/silver, whereas the X-A10 in only available in black/silver. On the X-A10, the silver accents are restricted to the top and bottom plates, while on the X-A3, silver surrounds the mount as well.

Another noticeable physical difference is the lack of a hot shoe on the X-A10, making it the only interchangeable X series camera not to have one. The X-A3 has a hot shoe that is TTL flash compatible.

Finally, the front of the X-A3 makes room for a focus dial, which facilities switching between single, continuous and manual focus. To do this on the X-A10, it is necessary to enter the menu.

The X-A3 comes with a couple of extra features that aren’t found on the X-A10.

The first is the Pre-AF mode whereby the camera continuously focuses even before you press the shutter button halfway down. This is an effective option when you don’t want to miss a shot.

The second is the Release priority / Focus priority setting that lets you tell the camera whether to prioritise the shutter response or wait until a focus is achieved to take a picture.

Another smaller difference is that the X-A3 supports the PictBridge portable printer and Exif Print while the X-A10 does not.

That said, you can often find some of Fujifilm’s older mid-range models, such as the X-E2 or X-T10, for a similar price if you keep an eye out for second-hand deals.

Putting subjective aspects such as design and colour to one side, there are four main factors that might convince you choose the X-A3 over the X-A10: the additional sensor resolution, slightly better autofocus system, touch sensitive screen, and hot shoe. If you feel you might benefit from one or more of these features, it could be worth paying the extra $100.

Otherwise, the two models are almost identical, barring a few minor differences such as the number of Film Simulation Modes and buffer performance.

Check price of the Fujifilm X-A3 on