You are here: Home / Preview / The 8 Main Differences Between the Canon EOS M100 and M6 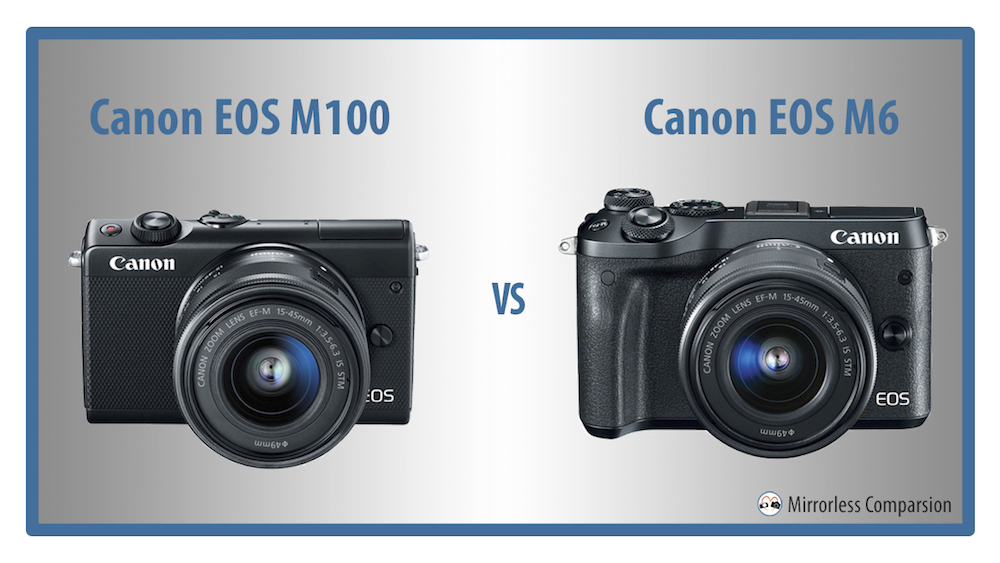 Despite belonging to the entry-level category, Canon was happy to furnish it with many of the best features found on the mid-range EOS M6. These include the latest 24.2MP sensor and DIGIC 7 image processor, Dual Pixel AF system, Full HD video at 60p, and Bluetooth connectivity, just to name a few.

Now, similarities are all fine and dandy, but if you’re visiting this article, you’re probably more curious to know about the main differences given the $300 price gap between the two cameras. Let’s take a look!

Ethics statement: The information supplied in this article is based on official specifications, press releases and our personal experience with Canon cameras. If we get the chance to test the two cameras side-by-side, we will publish a full comparison with high resolution image samples. We were not asked to write anything about these cameras, nor were we provided with any sort of compensation. Within the article, there are affiliate links. If you decide to buy something after clicking the link, we will receive a small commission. To know more about our ethics, you can visit our full disclosure page. Thank you!

The first difference that will immediately catch your eye concerns the size and design of the two cameras.

One reason for the larger dimensions of the M6 is the contoured grip out front, which makes the camera more comfortable to hold than the M100 which only has a thumb rest on the rear.

The M6 has a few extra features in comparison to the M100 including twin control dials, a proper mode dial, an exposure compensation dial (±3 EV) and a total of 13 customisable buttons/dials around the body. The M100 only has one control dial, a dial that lets you choose between stills/movies/Auto, and customisable shutter and movie record buttons with four custom functions.

Both cameras benefit from a tilting touch sensitive 3-inch LCD screen and pop-up flash but only the M6 has a hot shoe for accessories. 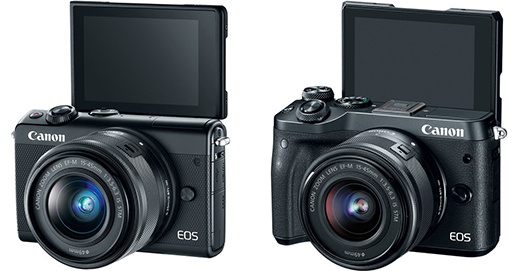 The M6 comes in two colour combinations – pure black or black with a silver top plate – while the M100 comes in three colours – black, silver and white. There are also seven colourful cases available for the latter.

Unlike the flagship M5 model, neither the M100 nor the M6 comes with a built-in electronic viewfinder.

However, because the M6 has a hot shoe on top, you have the choice of mounting an external electronic viewfinder such as the EVF-DC2 if you grow tired of relying on the rear LCD screen for all your shooting. 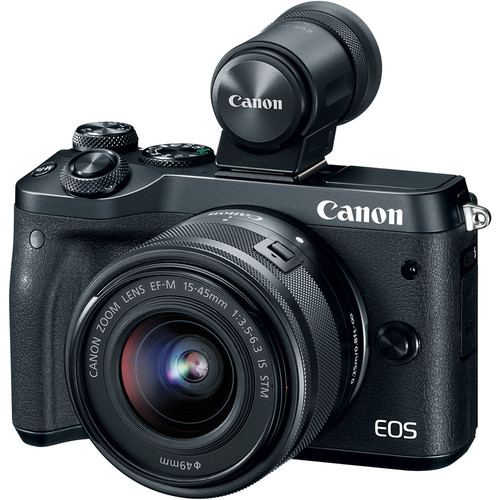 The M100 lacks a hot shoe and therefore cannot be used with an external viewfinder.

The M6 definitely has more going for it when it comes to continuous shooting capabilities but where the M100 lacks in speed it makes up for with a better buffer depth.

With the AF fixed on the first frame, the M6 can fire off approximately 9 shots for up to 26 JPG frames or 17 RAW frames. With Servo AF, this drops to 7fps. (Canon doesn’t provide any specifications about the buffer at this speed.)

The M100 can manage approximately 6.1fps for up to 89 JPG frames or 21 RAW frames with One-shot AF or 4fps for up to 1000 JPGs with Servo AF. (Once again, there is no information about the RAW performance at this speed.)

The two cameras don’t have in-body sensor stabilisation so you must rely on lenses with optical stabilisation when shooting stills.

For video however, there is a function called Digital IS which adds software (electronic) stabilisation. On the M6, it can work on its own or in conjunction with the optical stabilisation of select lenses (Canon calls it 5-axis Digital IS). The M100 can activated Digital IS only when a compatible IS lens is mounted (Canon refers to it as 3 axes Digital IS, which suggests it uses a less advanced algorithm). Note that in each case, the Digital IS mode applies an extra crop to your field of view.

As I mentioned above, both cameras come with a built-in pop-up flash unit but their specifications differ ever so slightly.

The first difference is the recycle time. Whereas the M6’s flash only takes three seconds to recharge, the M100’s takes five.

Second, you get Manual Flash On/Off with three flash power output settings on the M6 in addition to the Auto (E-TTL II) mode found on both cameras.

Thanks to its hot shoe, the M6 is also compatible with external EX series speed lights.

The M100 is targeting the selfie-loving generation, which is the reason for its new Smooth Skin feature. Adjustable in five levels, it brightens the image and washes out the imperfections from your complexion.

This feature isn’t available on the M6 even though it has a 180 degree tilting screen that is useful for selfies. Perhaps it will come via firmware update at some point!

The two cameras are both capable of taking approximately 295 shots on one charge (or just over 400 with the Eco mode) but they use different batteries to achieve this result.

The M6 takes the larger LP-E17 battery whereas the M100 uses the LP-E12, the same battery as its predecessor.

While the price of the M100 is more or less what you’d expect from a camera with these specifications, the high price tag of the M6 is somewhat difficult to justify considering that there are cheaper mirrorless cameras out there that boast both a viewfinder and 4K video.

Besides the various differences we’ve seen above, there isn’t much that sets these two Canon EOS M models apart.

The primary difference that could seriously impact your decision is the design – namely the larger grip and extra controls on the M6 – followed by the presence of a hot shoe on the mid-range model if you think you might like to try using a viewfinder or external flash unit at some point in your photography career.

The price is also something to consider, as the additional $300 required to buy the M6 might be better spent another lens or accessory for the M100.

Check price of the EOS M6 on