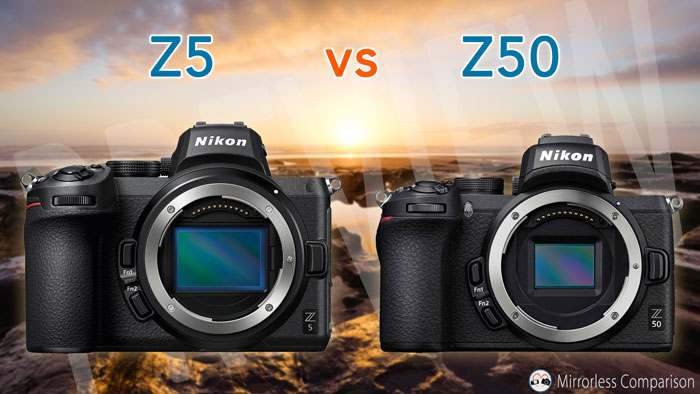 The Nikon Z5 is the fourth instalment in the brand’s Z-mount system, the third with a full-frame sensor and the least expensive. But there is another model that sits below it, and that is the DX format Z50.

The price is enough to set the two cameras apart, but is there anything the smaller camera does better than the bigger one? Let’s find out!

Ethics statement: We saw a pre-production Z50 at the press event. Information about the Z5 comes from various official sources online. We were not asked to write anything about these products, nor were we provided with any sort of compensation. Within the article, there are affiliate links. If you buy something after clicking the link, we will receive a small commission. To know more about our ethics, you can visit our full disclosure page. Thank you!

The Z50 uses a smaller APS-C sensor (DX format) with 20.9MP. The image below gives you an idea of the different size. A low-pass filter is included on both.

Note that the Z5 has a DX mode that crops the sensor by 1.5x, which results in an area the same size as the Z50 sensor. The resolution drops to 10MP.

The Z50 doesn’t have sensor stabilisation and therefore your only option is to use a lens with VR. When using a lens like this, the Z50 can use its gyro sensor inside to analyse the movement and combine this information with the optical stabilisation to improve the performance.

The Z5 can use its image stabilisation system for video as well. An Electronic VR option (digital stabilisation) is available on both cameras.

The Z50 is faster when it comes to continuous shooting speeds: it can go up to 11fps, whereas the Z5 has a mediocre 4.5fps.

The Z5 uses the same system found in the Z6 with 273 phase detection points distributed over 90% of the sensor area.

The Z50 also has a fast AF system with phase detection and uses 209 points across 90% of its sensor.

Face and eye detection is available on both, as well as Eye AF for animals (dogs and cats).

The minimum sensitivity is the same at -2Ev with an f/2 aperture. It goes down to -3Ev on the Z5 and -4Ev on the Z50 when the Low Light AF setting is selected.

Both cameras can record 4K video up to 30fps, but the Z50 can do this by using the entire width of its DX sensor. However the Z5 applies a heavy 1.7x crop, which is more than the 1.5x crop of the DX mode available on the full frame camera.

Concerning audio, the Z5 has two 3.5mm ports for in and out, whereas the Z50 only has a 3.5mm microphone input.

On the rear there is a large 3.2-in LCD screen with touch sensitivity. The tilting mechanism is different however: the one on the Z50 can tilt down to 180˚, whereas the one on the Z5 stops at about 45˚.

The Z50 is lighter and smaller than the Z5 as you can see below:

Despite the smaller size, the Z50 retains a large and comfortable grip that is not too dissimilar from the one on the Z5, except for the height.

The Z5 features a magnesium alloy body and comes with weather-sealing, whereas the Z50 uses magnesium for the top and front plates. There is weather sealing on the DX camera but it is not as advanced as the Z5.

A few differences concern the button layout as well. For example the still / video mode switch is found on top on the Z50 and on the rear on the Z5. On the back, the smaller camera lacks the AF-ON, DISP, Drive and Zoom buttons. Some of the missing keys are found on the right side of the LCD screen.

One thing you won’t find on the Z5 is the built-in popup flash.

The Z50 uses only one slot with the UHS-I standard.

The Z50 uses a smaller battery with less amperage (EN-EL25): the rating is about 300 shots per charge (LCD/EVF is not specified).

Both batteries can be charged via USB but the Z5 can also be powered via USB while the camera is in operation.

The difference in price and sensor size clearly puts these two cameras in different categories. Yet the Z50 manages to have the upper hand for certain aspects such as video and continuous shooting speeds. The 180˚ tiling screen might be useful for some too.

The Z5 has the advantage of sharing many things with the more expensive Z6, including a better viewfinder and 5-axis image stabilisation. And of course there is the larger sensor which is always tempting.

We also need to consider the lenses: right now only two have been developed specifically for the DX format, whereas more are available for the full frame Z5, although not all are affordable. Of course you can use FX lenses on the Z50 since the mount is the same, but if you are also considering adapting some DSLR F lenses, perhaps the larger body of the Z5 will suit the task better.