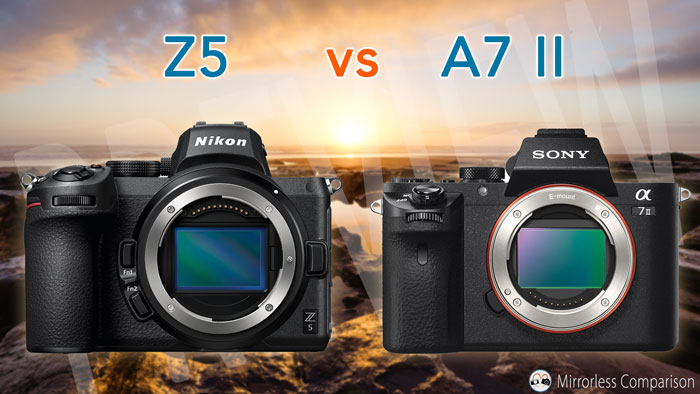 The A7 II came as a surprise in December 2014, just one year after the release of the original A7 camera that marked the beginning of Sony’s mirrorless full-frame adventure. To this day, the camera is still on sale, now with a very attractive price.

Sony’s strategy has inaugurated a new segment of affordable full-frame cameras. Canon and Nikon are the latest to join the trend but rather than letting an old model loose value over time, they decided to each introduce a new model at a lower starting price.

The Z5 is Nikon’s offering in this segment and it has to contend with the cheaper A7 II which, despite being older, is still worth considering. Let’s see how they compare.

Ethics statement: the following is based on our direct experience with the A7 II and official information about the Z5. We were not asked to write anything about these products, nor were we provided any other compensation of any kind. Within the article, there are affiliate links. If you buy something after clicking one of these links, we will receive a small commission. To know more about our ethics, you can visit our full disclosure page. Thank you!

The Nikon Z5 is the larger and heavier of the two. That said, the larger design comes with some benefits such as the bigger grip at the front that makes the camera nicer and sturdier to hold.

The Z5 design is basically identical to the Z6 that we own, and it’s one of my favourite mirrorless designs. It is reasonably compact yet comfortable to hold with all the buttons and dials in the right place.

The A7 II has an older design and is not my favourite. There is no AF joystick and the buttons are smaller.

Both cameras feature weather-sealing and have a magnesium alloy frame.

The Z5 is equipped with two SD card slots that are compatible with the UHS-II protocol, so you can use the latest cards available with faster writing and reading speeds.

The A7 II has only one slot, and works up to the UHS-I standard.

The Z5 has a better EVF with more resolution 3,690k dots and a magnification of 0.8x.

The A7 II viewfinder uses 2.36M dots and has a lower magnification of 0.71x. It has a slightly longer eyepoint however (22mm vs 21mm).

Concerning the rear monitor, both cameras have a tilting solution (2 axes up and down) but the A7 II has slightly more resolution (1.2M vs 1.04M dots). The Z5 screen is larger (3.2 vs 3.0-in) and has touch sensitivity.

The Nikon Z5 has 273 phase detection points that cover approximately 90% of the sensor area. It has a low light sensitivity of -2Ev (measured at f/2) which becomes -3Ev when using the Low-Light AF mode.

The A7 II features 117 phase detection points and 25 contrast detection areas. The phase different points cover a smaller portion of the sensor. The minimum sensitivity is lower at -1Ev / f/2.

The A7 II AF system is more than decent but it is older and not as fast or reliable as the latest Sony cameras.

Eye detection technology has made important progress in the last couple of years and has become a great tool for portraits. The Z5 has Eye AF in addition to face detection, and it works on cats and dogs too.

The A7 II has Eye AF but it works in S-AF mode only and doesn’t work with animals. Face detection works in Single and Continuous AF.

Both cameras feature an electronic first curtain shutter (the mechanical curtain is used only to end the exposure), but the Z5 also has a full electronic / silent shutter.

The Z5 records 4K video up to 30fps but with an annoying 1.7x crop on the sensor, so your field of view will change drastically. For example if you film with a 50mm lens, you’ll get the same angle of view of an 85mm lens. In 1080p, it uses the entire width of the sensor and can record up to 60p.

The A7 II doesn’t have 4K capabilities. It can record Full HD up to 60p. It does have more settings for video including the Picture Profiles with S-Log2 however.

The Z5 has a CIPA rating of 470 photos with the rear monitor or 390 photos if you use the viewfinder.

I can’t speak for the Z5 yet as it uses a new battery, but the one on the A7 II is not great so you’ll definitely want to buy some spares.

Both cameras can be charged over USB but only the Z5 can be powered while turned on.

As usual, it is important to consider the lenses and not just the camera body.

Nikon has released 14 lenses so far, with a decent selection of fast primes, high quality zooms and more affordable zooms. More is coming including the first super telephoto lenses.

With the A7 II you have access to no fewer than 30 native lenses from Sony, plus a lot more if we include third party brands such as Sigma, Tamron, Samyang etc.

Nikon has developed its own adapter to let you use the F-mount lenses and it works really well. With Sony, you have access to multiple adapters that make it possible to use Nikkor and Canon DSLR lenses (performance varies depending on the lens and adapter).

Note: prices as of July 2020. US prices don’t include taxes.

I prefer the ergonomics of the Z5, the autofocus is probably better (if it is like the Z6) and you’ll like the viewfinder as well as the touch screen. It is everything you’d expect from a more recent model.

That said, buying the latest product on the market isn’t always the best solution. The truth is that if you are after a full-frame camera at a bargain price, the A7 II is still worth considering. The image quality is excellent and the E-mount system has more lenses to offer for every need and budget.