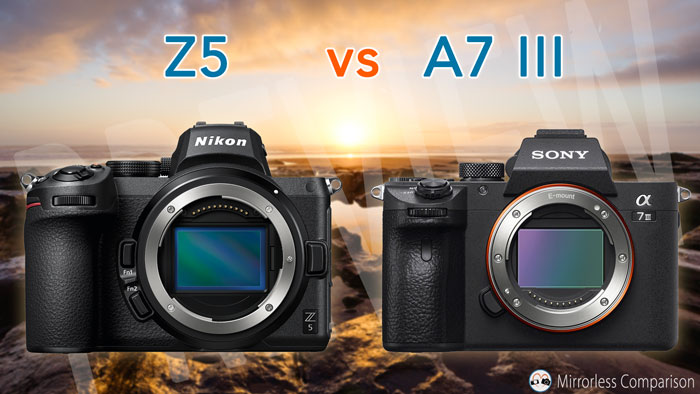 By leaving its older models on the market, Sony has started a trend of affordable full-frame cameras. The A7 II body for example can be found for less than $1000.

First Canon, then Nikon tried to respond by launching a more affordable camera, which is exactly what the Z5 is – though of course older A7 cameras are less expensive due to their age.

But how does the Z5 stack up against the more recent A7 III? And is the price all that different? Let’s find out!

Ethics statement: the following is based on our long-term experience with the A7 III and information about the Z5 found from official sources online. We were not asked to write anything about these products, nor were we provided any other compensation of any kind. Within the article, there are affiliate links. If you buy something after clicking one of these links, we will receive a small commission. To know more about our ethics, you can visit our full disclosure page. Thank you!

The Nikon Z5 is larger and is slightly heavier than the A7 III. Also noticeable is the larger front grip.

The Z5 has a very similar button layout and ergonomics to the Z6 that I currently own, and this is my favourite aspect of the camera. I’m pleased to see that the Z5 also has the handy still/movie mode switch and large buttons.

Both cameras feature a good number of custom buttons (although the A7 III should have more if the Z6 is any indication) and an AF Joystick on the rear.

Both cameras feature two SD card slots with UHS-II compatibility (although slot 2 on the Sony is UHS-I).

The EVF on the Z5 is the same as the Z6 and is excellent: it has a good resolution of 3,690k dots (OLED panel) and a large magnification of 0.8x.

The viewfinder on the A7 III has outdated specifications now: the resolution is lower (2,360k dots), as is the magnification (0.78x).The eyepoint is longer however (23mm vs 21mm) and both have a maximum 60Hz refresh rate.

Both screens are touch sensitive and you can do various things like move the focus point. On the Z5 you can also navigate the menu and change settings, whereas on the Sony you can double tap to magnify the live view, or use the screen as an AF pad while composing with the EVF.

The chip on the A7 III has a back-illuminated structure (BSI) which means that the photodiodes that collect the light and transform it into an electric signal are closer to the micro lenses on the surface of the sensor. This helps to collect more light and improve image quality (dynamic range and high ISO for example).

This should give the excellent sensor of the Sony an advantage over the Z5.

The Nikon Z5 inherits the same AF system as the more expensive Z6. It features 273 phase detection points distributed across 90% of the sensor. The minimum sensitivity in low light is -2Ev with an f/2 lens, or -3Ev when Low-Light AF is activated. There is Eye AF for humans, cats and dogs.

The A7 III uses 693 phase detection points that cover 93% of the sensor, and 425 contrast detection points. The minimum sensitivity is -3Ev (f/2 aperture). Eye AF works for humans and a wider variety of animals than just cats and dogs.

We know the AF of the Sony very well, having tested it multiple times in various scenarios and it’s one of the best in this price range, even for sports, wildlife and birds in flight. Eye AF is class-leading.

We have yet to try the Z5, but if it performs like the Z6, then it too will have a good autofocus system. Not at the same level as the A7 model (especially concerning Eye AF), but not far off either.

Both cameras can be used with DSLR lenses. Nikon offers its own adapter, the FTZ. For Sony there are a lot of adapters, although the performance with Nikkor lenses is not as good as that with Canon EF lenses.

The Z5 has far from outstanding capabilities when it comes to burst speeds, with a maximum of 4.5fps.

The A7 III on the other hand can do 10fps and AF/AE tracking remain available.

The Z5 and the A7 III can record 4K video up to 30fps, but the way they do it is different.

The Z5 can’t read the entire width of the sensor fast enough, so it has to use a smaller area that results in a heavy 1.7x crop. This means that your field of view will be severely reduced when recording 4K (the same thing happens on the Canon EOS R and RP).

The A7 III records 4K with the full width of the sensor and with oversampling, meaning it uses 6K data and downscales it to 4K for improved sharpness and details.

Furthermore the Sony has more internal profiles to choose from including S-Log2, S-Log3, HLG and many others that allow you to customise your image very precisely.

Concerning stabilisation, the Z5 can add digital stabilisation (with a 1.1x crop) in addition to IBIS, whereas the Sony uses just the sensor.

The Nikon Z5 has a battery life rating of 470 shots (LCD) and 390 shots (EVF) which is not bad at all. This is thanks to a newly developed battery that is more efficient.

That said, the A7 III battery remains superior with a rating of 610 or 710 images. It is one of the very best batteries for a mirrorless camera.

Both cameras can be charged over USB or powered while in operation. Note however that the Sony is not supplied with a separate charger for the battery.

The two cameras are part of two different camera systems, so it’s worth reserving a few paragraphs to talk about the lenses.

Nikon launched the Z mount two years ago whereas Sony started its full frame mirrorless adventure in late 2013, although the E-mount has been around since 2010 with the Nex series. So obviously Sony has had more time to release more lenses and they definitely didn’t waste it: there are now more than 30 native lenses from Sony, plus a good selection of AF and MF lenses from other manufacturers such as Sigma, Tamron, Zeiss, Samyang and Voigtländer.

Nikon has released 14 lenses so far which is not bad at all, and six more are in the pipeline, including the first long telephoto lenses.

Of course with an adapter you can access all the Nikkor DSLR lenses, but the same is also valid for the A7 III, and actually, the Sony works well with Canon lenses too.

Curiously, Techart sells an adapter to use E-mount lenses on Nikon’s Z cameras. I have never tested it myself so I can’t comment on the performance. The contrary is not possible because of the different flange distance (sensor to mount) between the two cameras.

Price as of July 2020. US prices exclude tax percentage.

The lower price of the Z5 could easily be a determining factor in choosing the Nikon. While not as complete as the A7 III, it looks like a nice introduction to the full-frame segment. It has a lovely design, and what you save on the camera body you can invest in a nice lens.

However, the Sony is two years old and it is likely that its price will come down, especially if the company releases an A7 IV sometime in the near future. Even now you can buy the A7 III for less thanks to various offers. And when the price difference becomes only 100 or 200, the A7 model will be the one to get.