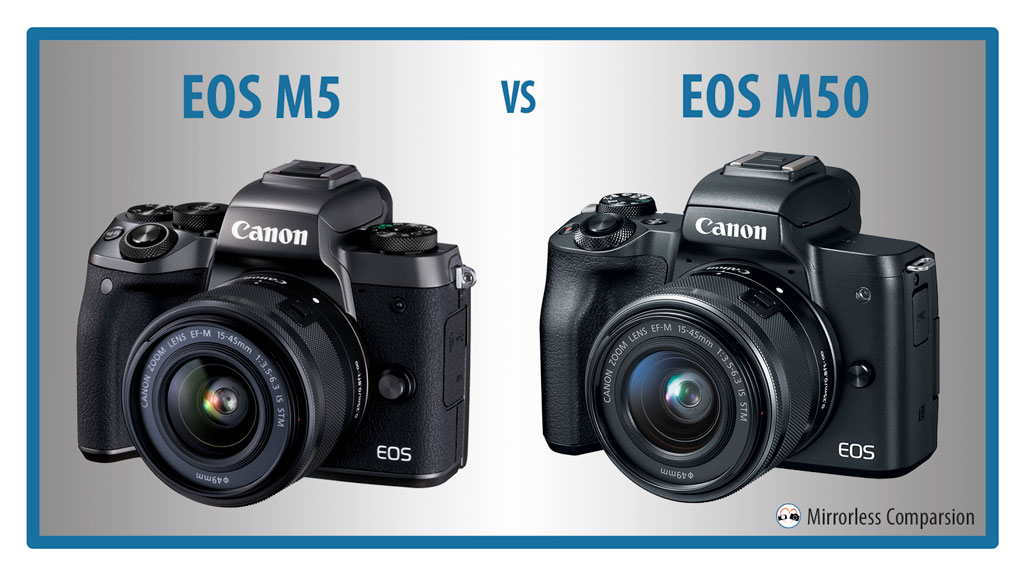 The Canon EOS M50 is the latest addition to the EOS mirrorless APS-C range. It’s the first camera in the line-up to feature the new DIGIC 8 image processor and 4K video, amongst other improvements. It sits within the entry-level range and targets smartphone and compact camera users. The M5 is the “flagship” model in the EOS series.

The two cameras share a 24MP APS-C sensor, 100-25600 ISO range, WiFi, NFC, Bluetooth, Microphone input and a very similar design that includes a built-in viewfinder. However the single digit that separates them implies that there are some important differences to consider, so let’s have a look at what they are.

Ethics statement: The information supplied in this article is based on the official specifications found on the Canon website. We were not asked to write anything about these cameras, nor were we provided with any sort of compensation. Within the article, there are affiliate links. If you decided to buy something after clicking the link, we will receive a small commission. To know more about our ethics, you can visit our full disclosure page. Thank you!

The EOS M50 is the first mirrorless camera from Canon to record 4K video. It can do so at a maximum of 25p (24p in North America) but the camera performs a 1.6x crop on the sensor so the field of view is narrower than in stills mode. The autofocus only works with contrast detection AF.

There are other 4K features including 4K Time-lapse and the possibility to save a frame from 4K footage into an 8MP JPG.

The M50 is the first Canon digital camera to benefit from the new DIGIC 8 image processor, which brings many improvements such as 4K (as seen above), an updated autofocus system (more information below), more highlight tone controls, and a better Auto Lighting Optimiser and Digital Lens Optimiser.

The M50 also receives a silent mode and an updated gyro sensor that interacts with the optical stabilisation of M lenses to improve shake compensation. It works for stills and video, but for the latter it crops the sensor further.

Perhaps the most important improvement concerns the autofocus.

The M5 uses 49 points covering 80% of the sensor’s surface and Zone AF can be set with a maximum of 9 points.

The new camera has more sensitivity in low light (-2Ev vs -1Ev on the M5), and in addition to face detection – which is available on both cameras – the M50 can use Eye AF in single focus mode.

The M50 can record at 10fps, which is a minor improvement over the 9fps capabilities of the M5. With continuous AF, both cameras top out at 7.4fps and 7fps respectively.

The M50 has slightly better buffer capabilities as well. Looking at the official specifications, it can record 33 frames in JPG and 10 frames in RAW at 10fps, whereas the M5 can do 26 frames in JPG at 9fps.

The EOS M50 is the first camera to feature the CR3 14-bit RAW file format from Canon, which also includes the C-RAW option (C stands for Compressed) that allows you to save files with a 30-40% smaller size.

They both feature touch sensitivity, including the Touch and Drag AF feature that allows you to move the focus point while composing with the EVF.

Although the two cameras look very similar, there is a tiny difference in size and weight:

The front grip has been re-designed on the M50 and we can find a few subtle cosmetic changes as well. The new camera is also available in white.

The M5’s main shooting dial is on the top left side and incorporates more options including two custom modes (C1 and C2). It also has an extra control dial on the top right side.

The On/Off switch has been moved to the top right next to the shooting mode dial on the M50.

The M50 also features more function buttons (12 vs 9). Both include a Micro HDMI output and a microphone input.

The two cameras come with different batteries: the M5 uses the LP-E17 while the M50 uses the smaller LP-E12.

The fact that the M5 battery is larger means that the camera has a better battery life. According to CIPA standards, it can record 295 shots or 420 with the ECO mode. The M50 manages 235 or 370 shots respectively.

Of course in real world use, you can exceed these specifications but they are a good indication of which should do better in terms of battery performance.

The EOS M5 can be found at the following retail prices:

Note that you might come across discounts and instant rebates on the M5 given its age.

The M50 is less expensive and starts at:

Despite the M50 being labeled an entry-level model, it features numerous specifications that render it superior to the M5 such as 4K recording, more autofocus points and a new image processor. For this reason, the new camera should also prove much more appealing to potential users, especially since it retains the built-in EVF and costs less.

The M5 didn’t really impress us in terms of its specifications, and now it has been surpassed by its own kin. Perhaps Canon will present a M5 successor later on with more advanced features, but for now, the additional physical controls and slightly better battery life don’t seem to be enough to recommend it over the M50 – although to be fair, only a proper side-by-side test can confirm this.