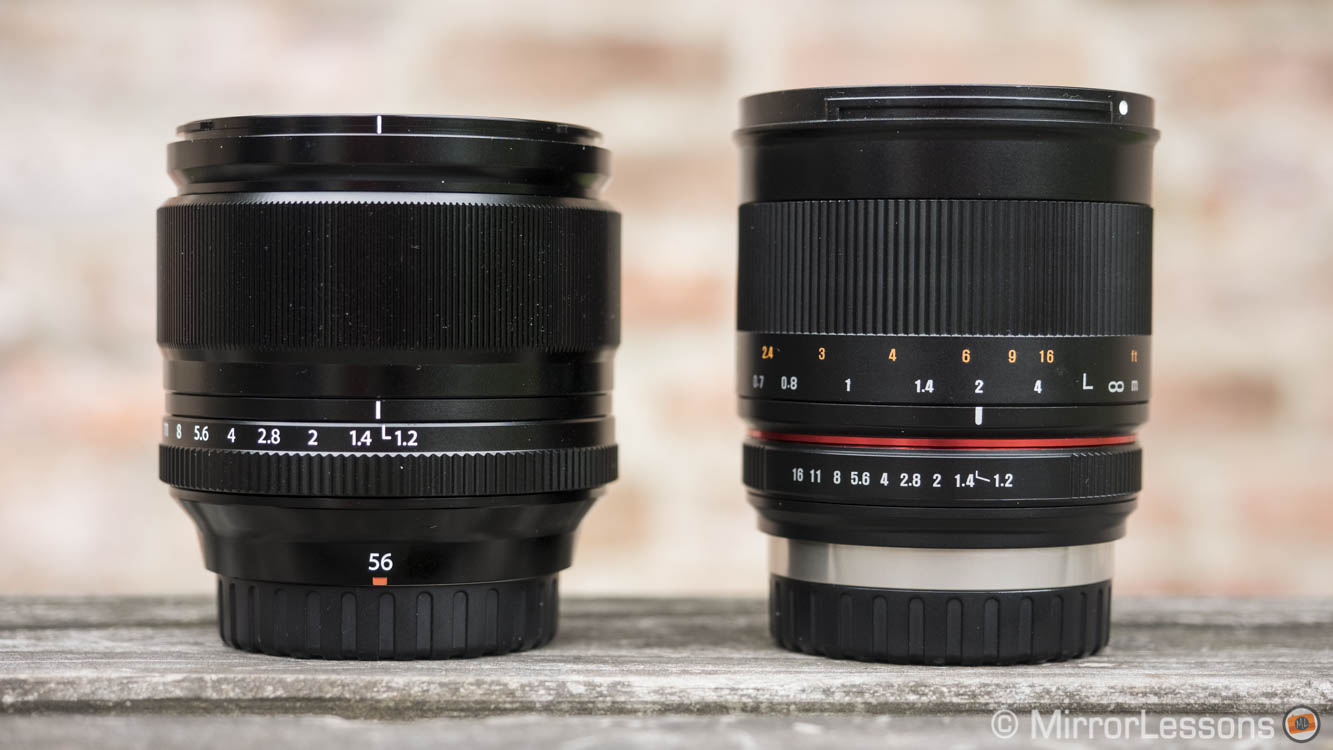 If you are looking for a portrait lens for the Fujifilm X series, the first choice that many photographers would recommend is the XF 56mm f/1.2. Released two years ago, it was the first lens designed specifically for portraits by Fujifilm and is one of my favourites from the brand.

However up until last year the system was lacking an alternative from third-party manufactuers. This is where Samyang comes in with its 50mm f/1.2 which was released in 2015.

Despite the slight difference in focal length, the two lenses have been designed for the same purpose and their common fast aperture of f/1.2 naturally pits them against each other. There are many differences that we are going to see in this article but the discrepancy in price in particular leads us to ask the following question: how big is the difference in optical quality? Let’s find out!

Ethics statement: This article was originally produced in 2016 for MirrorLessons, our original review website. We then transferred it over when the comparison section was upgraded to the very website you are visiting right now. Both lenses were loaned to us so that we could conduct this comparison. We were not asked to write anything about these products, nor were we provided with any sort of compensation. Within the article, there are affiliate links. If you decided to buy something after clicking the link, we will receive a small commission. To know more about our ethics, you can visit our full disclosure page. Thank you!

Note: the Samyang lens is distributed under the Rokinon name in certain countries. The lens has been designed for APS-C mirrorless cameras and is also available in E-mount, EF-M mount and micro four thirds mount.

The two lenses are very similar in size: the Samyang 50mm is slightly longer while the Fuji 56mm is a little bit larger and heavier. In the real world, these differences become irrelevant. Both lenses are supplied with a plastic hood and neither is weather-sealed. 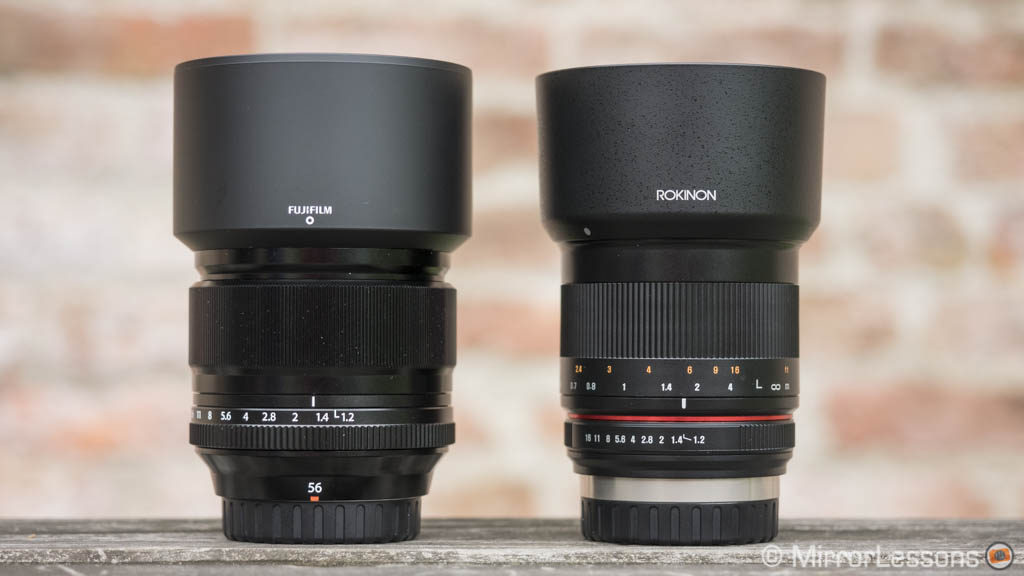 The Fujinon lens has an all-metal barrel that gives the product a premium feel.

However because the focus and aperture rings occupy most of the barrel’s surface, there is an annoying lack of space to grip onto when mounting or unmounting the lens (and having the hood attached doesn’t help either).

The Samyang lens gives you more grip and doesn’t feel any less robust than the Fuji lens, but most of the barrel is finished with plastic, including the aperture and focus rings.

The focus ring on the XF 56mm is a “fly by wire” type which gives you a decent manual focusing experience but it isn’t as pleasant or precise as the mechanical focus ring of the Samyang 50mm. 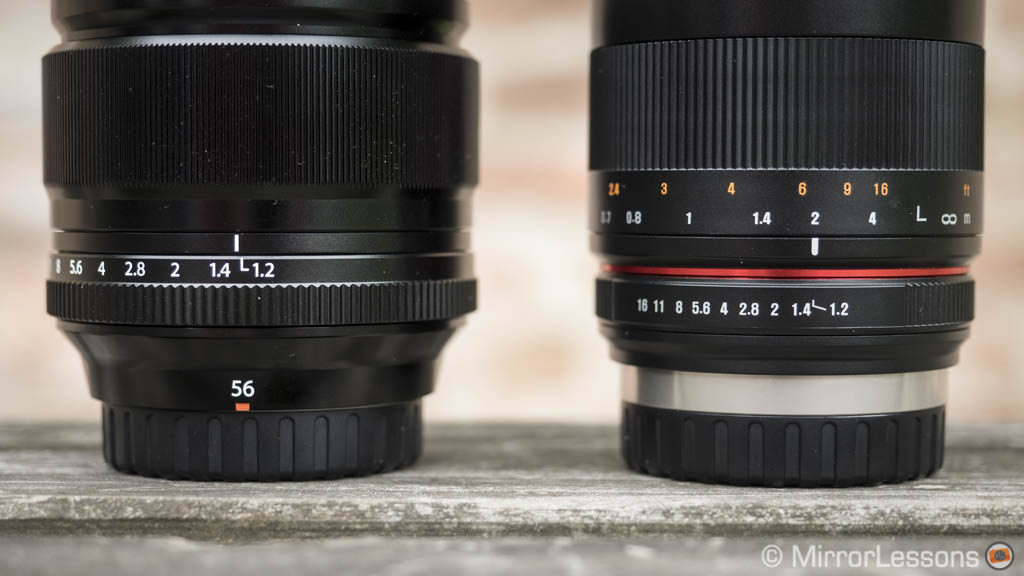 Both lenses feature an aperture ring. The one on the Fuji lens moves in 1/3 steps and features an A step at the end to switch to Shutter priority mode. The aperture ring on the Samyang lens moves in 1/2 steps. There isn’t an A option because the lens lacks electronic contacts on the mount. This also means that no EXIF data concerning the focal length, focus distance or aperture will be transmitted to the camera. 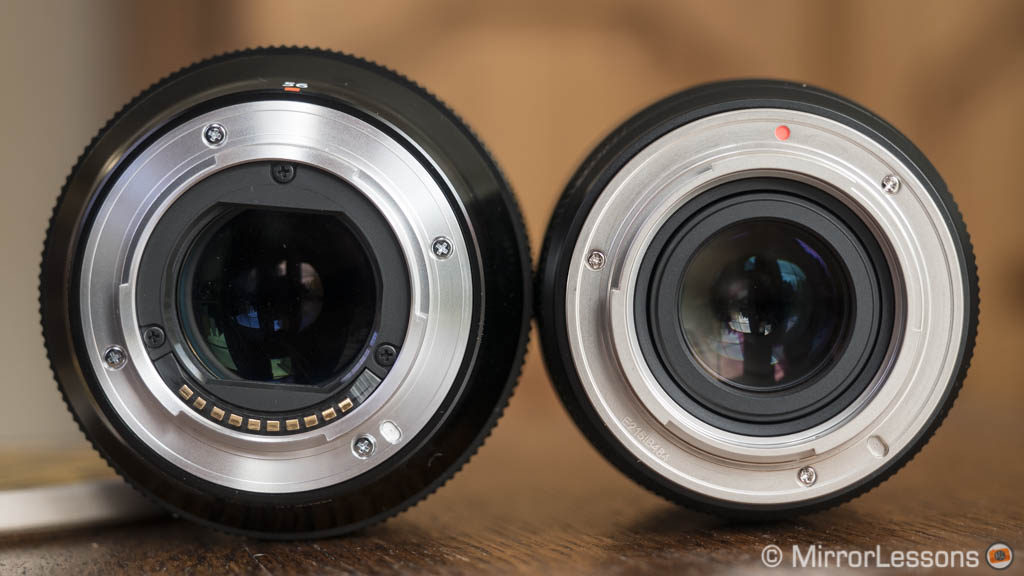 There is a tip to record the correct focal length, which is useful if you are using more than one manual focus lens. In the Menu you can find the Mount adapter setting that is meant to be used with the Fujifilm M-mount adaptor for Leica M lenses. If you set the focal length to 50mm, that input value will display in the EXIF data.

One of the main differences between these two lenses is the focusing system.

The Fuji 56mm is an autofocus lens with decent performance on the X-T1 and X-Pro2. The AF motor is a little bit noisy and it isn’t the fastest Fujifilm prime lens. For portraits, I use the smallest single AF point on the eye. The result is accurate most of the time but it is better to take at least two shots: the camera can occasionally misfocus and the eye will be slightly out of focus as a result.

The Samyang lens is manual focus only. The mechanical focus ring is smooth without being too loose so the experience is pleasant. Adjusting the focus distance at f/1.2 or f/1.4 is not easy however. I used the red peaking MF assist set to Low and the magnification feature to make sure I was nailing my focus correctly. The peaking MF assist on Fuji cameras is precise but at f/1.2 only the magnification can give you a precise idea of where your focus point lies.

Before showing some portrait examples, let’s assess the difference in sharpness. Note that I performed the test twice to make sure my focus was accurate.

The first test shows the optical performance at a close focus distance. We notice right away that at the fastest aperture, the Fuji lens is clearly superior.

The Samyang 50mm improves at f/1.4 but the 56mm remains slightly sharper. From f/2, the Fujinon lens becomes razor sharp and outclasses the Samyang lens at every aperture. I also noticed that the Samyang images are always slightly underexposed even when the exposure settings are exactly the same. It seems that the Fujifilm lens has more accurate light transmission.

Although the two lenses are not designed for landscapes or genres that require you to focus near infinity, it is always a plus when a portrait lens can perform well at long focus distances.

Here as well, the Fujinon lens wins while the Samyang lens appears softer at every aperture including f/5.6 and f/8.

The Samyang has more vignetting even with the correct profile applied in Lightroom which means you need to tweak the correction manually a little bit more. Concerning flare and chromatic aberration, the Samyang 50mm defends itself quite well. CA is absent from both lenses. The XF 56mm minimises colour flares a little bit better while the Samyang lens can produce a small rainbow flares in direct sunlight.

In the first set of pictures we can see the slight difference in angle of view because the two lenses don’t have the same focal length (28.5° vs 31.7°). Both lenses produce a pleasant shallow depth of field at f/1.2 with good separation of the subject from the background and foreground. Once again the Fuji lens is sharper overall while the Samyang 50mm produces a softer look. However in this real world example, I find the Samyang lens defends itself better in comparison to the sharpness test seen above.

At f/1.4 the results are very similar. From f/2, the superior sharpness of the Fuji lens becomes more relevant and from f/2.8 the difference in depth of field also becomes more noticeable. Of course I could have moved closer to my subject with the Samyang lens to reproduce the same composition but I find it more interesting to show the differences at the same distance.

We also notice a tiny difference in colour rendering. The Samyang lens seems to have a slightly warmer/yellowish tint than the XF 56mm.

Let’s move on to one of the characteristics portrait photographers are most interested in: bokeh.

At the fastest aperture, we can see that neither lens has perfectly rounded out of focus circles. The Samyang lens has more “cat eye” shapes at the edges and overall produces a more noticeable swirly effect in comparison to the XF lens.

At f/1.4 the results are more similar and the Samyang lens loses the swirly effect, producing more rounded bokeh circles.

From f/2, the Fuji lens start to render a hexagonal-type shape while the Samyang bokeh remains more circular. This is also noticeable at f/2.8. The circles in the Fuji version are plainer however, while the Samyang lens displays more of an onion ring effect.

Our last set of examples show the performance for a full-body shot. These show how well the lenses separate the subject from the background at a longer distance. At f/1.2 the performance isn’t dissimilar despite the Fuji lens having a longer focal length and therefore a slightly shallower depth of field once again.

This last example confirms the various findings seen up until now. The Samyang lens gives the best performance with short focus distances which means upper body and head shots. Sharpness is worse at longer focus distances. Even at f/2.8 the 56mm’s advantage is noticeable.

If sharpness is your main concern, there isn’t a lot to discuss: the Fujinon 56mm wins hands down. The amount of detail at f/1.2 is excellent and the lens performs well up to f/11 at short and long focus distances. The bokeh is more uniform at f/1.2 and f/1.4 and I don’t have to remind you of the advantage of having autofocus.

The Samyang 50mm must be seen as a cheaper alternative that still gives you a fast f/1.2 aperture. However I find its use limited to head and upper body shots (or in other words, short focus distances) if you want acceptable sharpness. At f/1.2, images can look very soft in some situations while the performance improves a little at f/1.4. The bokeh doesn’t look bad and actually from f/2 it is even more pleasant than the Fuji 56mm lens.

The price difference is relevant. The Samyang 50mm can be found for half the cost of the Fujinon 56mm (retail prices). That being said, the Fuji lens is now two years old which means you can find occasional discounts, interesting deals or second hand options. The price you find might not be as low as $500 but an extra $100 or $200 above that is definitely worth the investment in my opinion.

The Samyang 50mm can be a decent alternative if you really don’t want to invest a lot of money, need the fast aperture (but do you really?) and intend to use the lens for amateur purposes. Perhaps with a slightly lower price, this 50mm could be a more attractive solution.

All things considered, I wish that Samyang had designed an f/1.4 or even an f/1.8 lens. It could have been even less expensive and perhaps have had better sharpness, making it a more interesting alternative to the Fujinon 56mm.