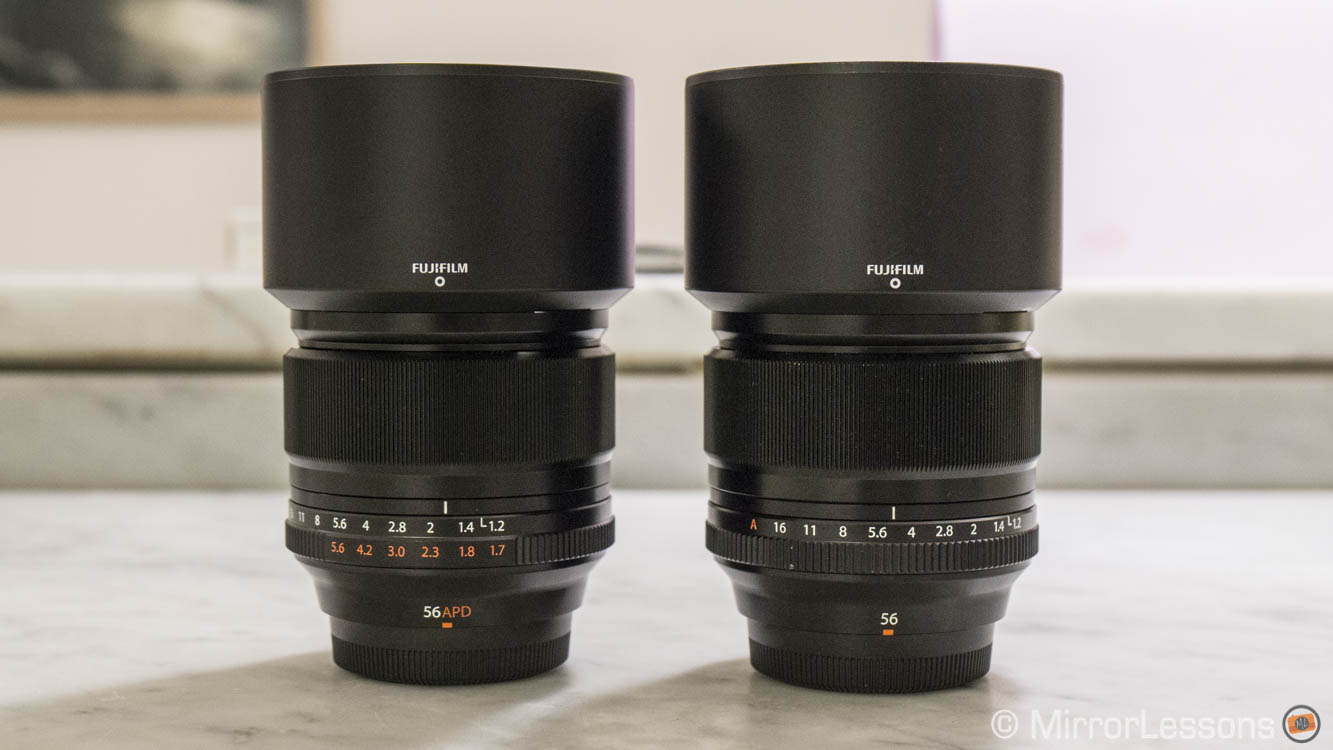 Since its release a few years ago, the Fujinon 56mm f/1.2 has been a popular and very logical choice for portraits thanks to its excellent sharpness and smooth bokeh rendering. Not too long after the first version was released, a second “APD” version hit the market which promised a superior bokeh rendering.

Some time ago in Turin, I had the chance to use these lenses side-by-side during two separate portrait sessions with a pair of young Italian actresses, Barbara and Lara. I had used the original 56mm several times before but this was the only time I had the chance to use the APD version and compare it to the normal version. Since I didn’t have enough time to test the 56mm APD in-depth, this article will focus on the main difference between these two lenses: the bokeh.

Given the difference in price, it is logical to wonder whether the APD version and its enhanced bokeh rendering is worth the investment. Let’s find out if this is the case!

Ethics statements: This article was originally produced in 2015 for MirrorLessons. We then transferred it over when the comparison section was upgraded to the very website you are on right now. The two 56mm lenses were provided to us by Fujifilm for two weeks. We were not asked to write anything about these lenses, nor were we provided any other compensation of any kind. Within the article, there are affiliate links. If you buy something after clicking the link, we will receive a small commission. To know more about our ethics, you can visit our full disclosure page. Thank you!

On the APD lens, you can notice that there are two f-stop values on the aperture ring: the ones in white indicate the iris aperture while the red numbers indicate the equivalent f-stops by taking into account the difference in light gathering produced by this anodisation filter. If you take a closer look at the markings, you can see that the fastest aperture is most affected (f/1.2 vs f/1.7 so almost a 1 stop difference). The more you stop down, the less light is lost by the APD filter until you reach f/5.6 where they equalise. Note that this equivalence only applies to light and not depth of field.

Concerning the build quality, the two lenses are identical: they have a metal barrel, large fly-by-wire focus ring and a 1/3 clicking aperture ring that are pleasant and precise to use. They lenses aren’t small but they aren’t excessively large or heavy either, so they fit a body like the X-T1 or X-T2 well.

Individual experience with each lens

I had the chance to review the first 56mm and use it on several occasions, and it has long been one of my favourite portrait lenses. It provides good results at f/1.2 and becomes razor sharp from f/2. The bokeh rendering can be spectacular and at f/1.2, the shallow depth of field is more than enough to detach the subject from the background even for half-body or full-body shots.

Because I knew I would use the APD version for two different portrait sessions, I decided to use it exclusively for the first shoot with Lara. I didn’t want to think about switching lenses all the time and making comparisons. Rather I wanted to see how the lens performed on its own and whether I would notice anything different. Most importantly, doing so gave me the opportunity to concentrate fully on my subject.

Working with the 56mm APD on its own, I didn’t notice any relevant differences in terms of optical quality. The lens feels exactly like the normal version.

Neither lens has an incredibly fast autofocus motor but the normal 56mm performs better overall. With the APD model, you lose phase detection capabilities, so the camera will use contrast detection instead. That being said, in good light conditions, it isn’t a deal breaker.

For the second session with Barbara a couple of days later, I switched between the two lenses a couple of times to get a more precise idea of where the differences lie. I should also specify that I didn’t perform a scientific comparison: I wanted to see if I would notice relevant differences for portrait work by concentrating on my subject rather carrying out precise sharpness tests.

The differences are rather difficult to spot but there is definitely something to talk about. At first, the 56mm seems to render a shallower depth of field, and the out-of-focus area seems blurrier. In reality, it is just the bokeh that is different on the APD lens: it has more distinctive contrast and the out-of-focus circles have smoother edges. The circles appear smaller on the 56mm APD but they are also softer, while on the 56mm normal lens, the circles can have a more distinctive border. It almost looks as if the bokeh circles on the APD lenses are more “spherical” while on the normal lens they appear more like discs.

Now I admit that a more scientific studio test would have probably better demonstrated this difference but I like these examples because they show how subtle the differences can be in an outdoor environment. We could say that the APD has more character and depth.

If we focus closer and stop down, the difference between the two lenses is far less noticeable as you can see from the two images below. So the so-called advantage of the APD is really at the fastest apertures.

The 56mm APD is a very specific lens that only certain portrait photographers who like to control the backgrounds and bokeh can appreciate. I don’t shoot portraits for work every day so perhaps I didn’t have the opportunity to fully appreciate the quality of this APD lens and tell you if it is worth the extra money.

If I go with my gut instinct, I can say that both are excellent lenses, but you are better off saving some money and getting the normal 56mm version. Once you start shooting with it and see the wonderful results, it is unlikely that you’re going to dwell on how much better the bokeh could be.

If you are a professional portrait photographer who pays as much attention to the background as to the subject, then the 56mm APD could provide that subtle improvement you’re looking for.