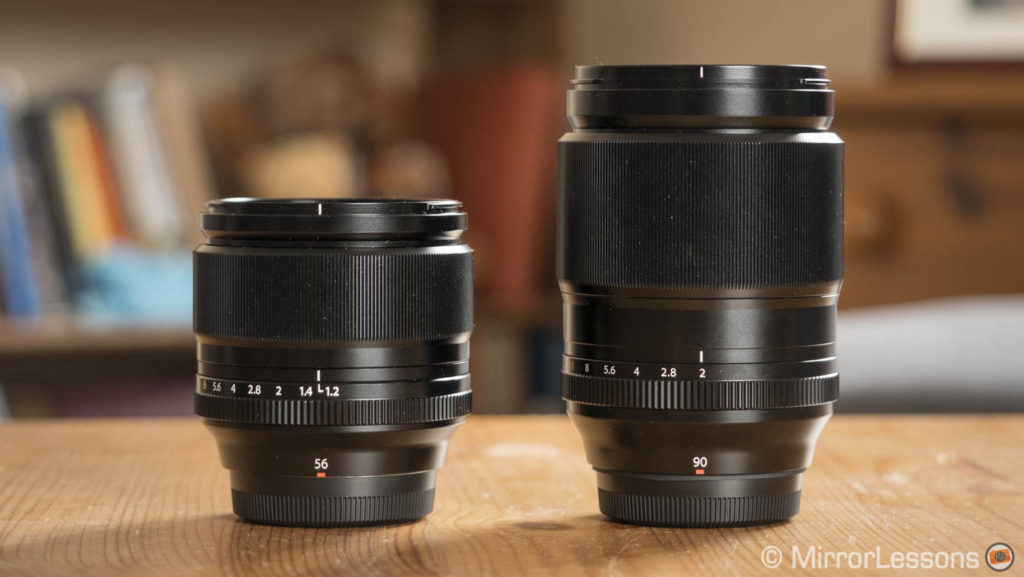 The Fujinon XF 56mm f/1.2 has long been one of the most popular lenses for the Fuji APS-C mirrorless system. It has a fast aperture, a lovely rendering for portraits and its size – while not the smallest in the line-up – fits most X-series cameras well. It would be my first recommendation to any serious portrait photographer.

There is however another more recent portrait lens that we must take into consideration: the XF 90mm f/2. It has a state of the art autofocus motor and is as sharp as the other premium XF lenses. The obvious difference in focal length might be enough clinch the decision for some but for those of you who are hesitating or are simply curious to find out how these two prime lenses compare, we’ve compiled this complete comparison. We hope you find it useful!

Ethics statement: We were loaned these two XF lenses for review purposes. We were not asked to write anything about the lenses, nor were we provided with any sort of compensation. Within the article, there are affiliate links. If you buy something after clicking the link, we will receive a small commission. To know more about our ethics, you can visit our full disclosure page. Thank you!

The first difference regards the size and weight. As you can see below, the 90mm is longer and while both lenses have a similar diameter, the 56mm remains 135g lighter. Factor in the plastic hood and the total length extends quite a bit. 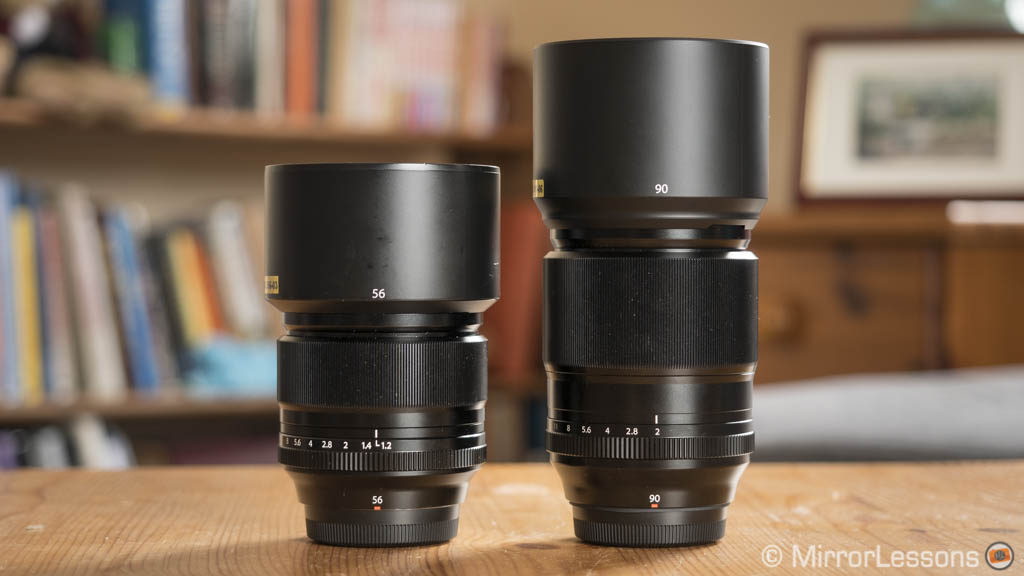 The 90mm has a more robust construction with weather sealing: the lens can stand up to moisture, dust and low temperatures of -10°C. The 56mm on the other hand is not weather sealed but has a solid metal construction.

Both lenses feature a clicking aperture ring that moves in 1/3 steps. The 56mm’s moves about a little more freely than the one of the 90mm.

Then we have two large “fly-by-wire” focus rings and here again the one on the 90mm feels a little more precise. Another nitpick is that on the 56mm, there is less space on the barrel to grab the lens when mounting or un-mounting it. The most space is found near the mount but it is uncomfortable to grab and turn the lens from there.

One final note concerning the XF 90mm: when the camera is turned off, you can feel the lens elements moving around inside. This is because the 4 linear motors are linked to four magnets that remain disengaged when the power is off, so it’s no cause for concern. 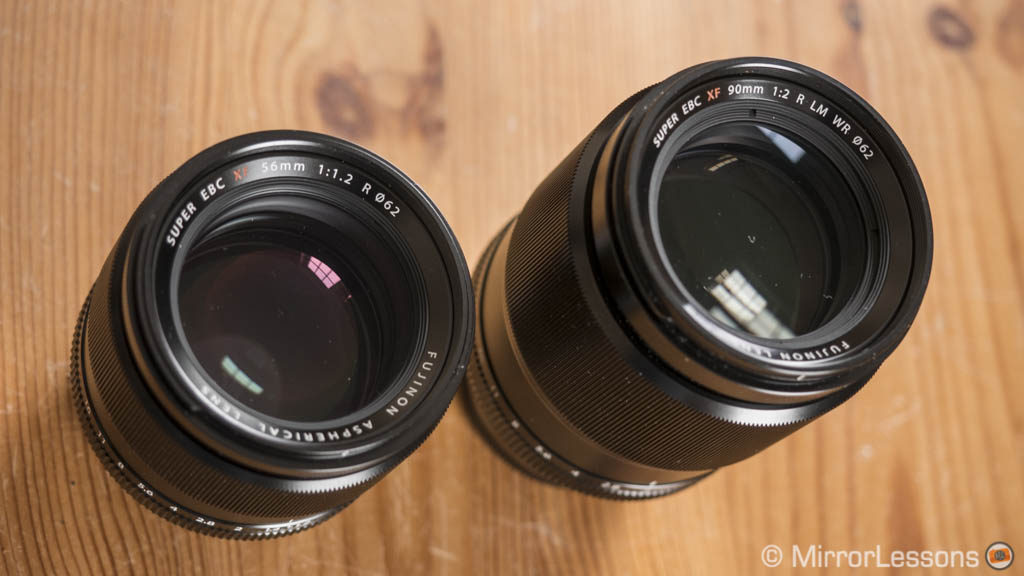 The difference in focal length can be a major factor when choosing between lenses. Here is one example that shows the difference in composition when shooting from the same distance. You will have the chance to see other examples in the sharpness and bokeh chapters.

Note that for some tests, I varied the distance from the subject on purpose to produce a similar composition. Doing so gave me similar magnification areas to analyse and made it easier to spot the differences. 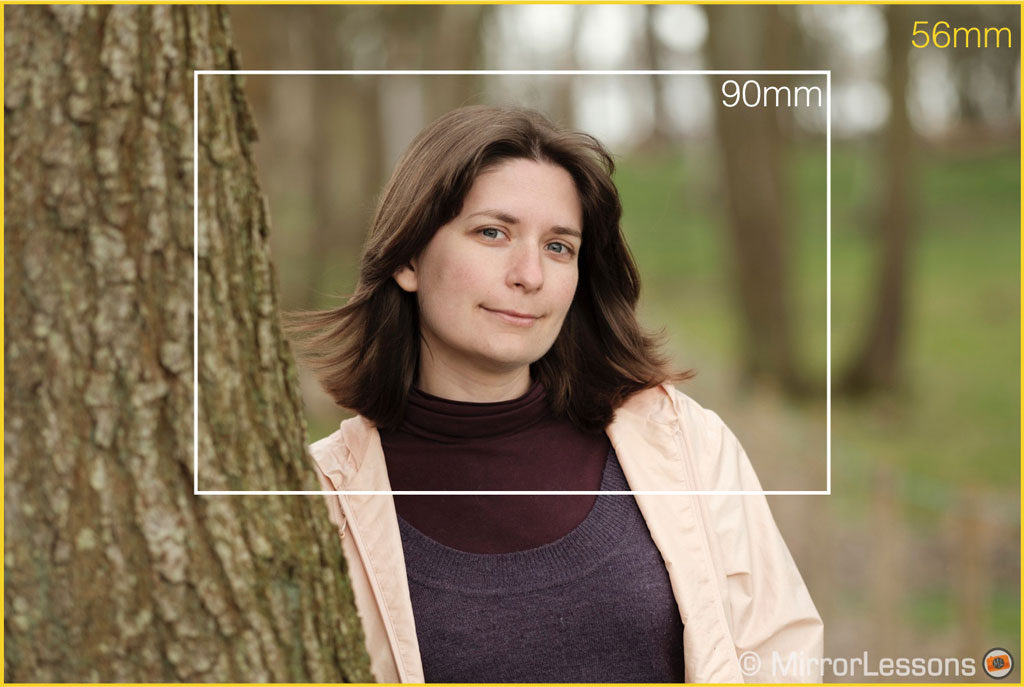 Let’s begin with the sharpness performance of the two lenses at a close distance. To make the side by side images easier to look at, I tried to create the same composition by backing up while using the 90mm.

The 56mm has a faster maximum aperture than the 90mm and while the performance is really good at f/1.2 and f/1.4, peak sharpness is reached at f/2, which is the first aperture shared with the longer lens. The 90mm retains slightly more sharpness wide open.

From f2.8 onward the results are more or less identical. Diffraction starts to kick in at f/11 but remains reasonably contained even at f/16, which is the smallest aperture available on both lenses.

In our second sharpness series, I took a landscape shot from the same distance so you can see how the field of view changes.

Here as well the 56mm appears softer up to f/2, whereas the 90mm retains a tiny advantage that is almost non-existent from f2.8 onwards. Obviously we perceive more details with the longer lens since everything is larger.

I won’t go into the corner performance too much but know that once stopped down, both lenses offer good results across the frame so they can serve other genres such as landscape photography very well.

Another point to observe from the examples above is that the 56mm has less contrast than the 90mm. This doesn’t come as too much of a surprise to me because the 56mm is designed for portraits more than anything else, and like many other portrait lenses, the goal is to render smoother skin tones. The 90mm on the other hand can serve more purposes beyond strictly portraits so seeing more contrast in the results make sense. Of course, contrast is an aspect you can easily control in post production.

When we talk about portrait lenses, bokeh, shallow depth of field and subject separation are always key selling points. Here again we have to consider the different focal lengths and this is a good opportunity to analyse how they behave.

Note: I skipped examples at f1.4 with the 56mm lens so as not to fill the article with too many images, especially considering that the rendering at 1.2 and 1.4 is similar.

If I start by showing you two portraits taken at the fastest apertures and from the same distance, we can see that the field of view is different but the amount of background blur looks similar: the fast f/1.2 aperture of the 56mm compensates for the shorter focal length. The 90mm has larger bokeh balls but that is simply because it magnifies them more.

However if I downsize the 90mm image to match the magnification of the 56mm picture, we can see that the latter has fewer in-focus details. For example, the hair around the head is blurrier in comparison to the 90mm version. It’s not a huge difference but it’s there and we can noticed that the 90mm delivers more sharpness as well.

With the 56mm, you can increase the depth of field a tiny bit by stopping down to f1.4 which gives you slightly more sharpness as well. It is also worth noting that at f/1.2, it is more difficult to set a precise focus point regardless of whether you use auto or manual focus as every micro movement of the subject can alter the result a little. (Note that the camera was on a tripod for these examples.)

If I set the two lenses to the same aperture, it’s the 90mm that gives a shallower depth of field this time thanks to its longer focal length. Sharpness and detail in the face are much more similar.

What happens if I change the distance to create the same composition? Well, with both lenses set at their respective fastest apertures, the background has a similar amount of blur but the 56mm has fewer details in focus on the subject’s face once again. As soon as I set them to the same aperture, it’s the 90mm that remains slightly shallower.

Below is another example at f2.8.

Another example I took was a full body shot for which I kept the same composition by varying my distance from the subject once again. The 90mm compresses the image more because of the longer focal length but in terms of subject separation, the 56mm defends itself well at f/1.2, although at that aperture the decreased sharpness becomes even more evident than in the previous examples. When both are set to f/2, sharpness is equal but the 90mm does a better job of separating the subject from the background.

By looking at all the previous images, you may have started to notice the bokeh characteristics of the two lenses which, to be honest, aren’t all that different.

The 56mm has a uniform rendering overall. At f/1.2 and f/1.4 we can see more oval shapes at the edges of the frame and a slightly swirly effect. At f/2 the bokeh balls start to lose their roundness and assume the heptagonal shape of the aperture diaphragm. This becomes more evident as you stop down. Aberrations as well as onion rings are well contained which contributes to the smooth and creamy effect.

The 90mm rendering is really good too. The shapes at the edges remain similar to the centre with a uniform rendering while the roundness of the bokeh balls starts to disappear from f/4.

The 90mm not only has a longer reach but also a shorter minimum focus distance in comparison to the 56mm. This means that it also has a higher magnification ratio (0.2x vs 0.09x). You can see a direct example below where I managed to get much closer to my subject.

You can find traces of mild chromatic aberration at the fastest apertures (especially from the 56mm) but they are not too invasive and easily removable with a post production software.

Vignetting is almost non existent on the 90mm and well-contained at the largest apertures on the 56mm lens. Some ghost and veiling flares can appear when direct light hits the sensor but otherwise the resistance is pretty good.

Here comes an important difference between these two lenses. The 90mm has been designed with a quad linear motor that makes it one of the fastest autofocus lenses in the Fujifilm X line-up. I tested it with moving subjects in both good and low-light conditions and I was always impressed by the quick and smooth performance.

The 56mm doesn’t perform poorly by any means, especially when used on recent cameras such as the X-T2. In our side by side tests, we found that it actually holds up quite well against the 90mm. But overall the response is a little slower and the AF motor isn’t as smooth nor as quiet as the 90mm.

If you are interested in manual focus, the focus ring on the 90mm is more precise in operation especially when trying to fine-tune a point. On the 56mm, it can be more difficult to focus on small details when using magnification and requires more trial and error, especially considering the shallower depth of field of the fastest apertures.

The XF 56mm f/1.2 and the XF 90mm f/2 are both excellent portrait lenses and in addition to being priced similarly, are definitely the very best the system has to offer in terms of optical quality. There are many differences however, starting from the obvious: the focal length.

The 56mm gives you the classic field of view of a portrait lens (85mm equivalent) and is usually the portrait photographer’s weapon of choice. It is easier to work with in tight spaces whereas the longer reach of the 90mm (137mm equivalent) can pose more of a challenge. For studio and indoor work, the 56mm is definitely the best choice and its fast 1.2 aperture makes it a good companion for low light work in spite of the slightly slower AF motor.

The 90mm is more versatile but for different reasons. For outdoor work or if you do lots of head-shots where you don’t go wider than the head and neck, it can be the perfect focal length to work with. Its higher magnification also allows you to get much closer if you want to hone in on a specific detail. Last but not least, it’s one of the fastest autofocus lenses from Fujifilm so it can be useful even with fast moving subjects.

Additional note concerning the 56mm lens: there is a second version called APD whose anodisation element gives you a different bokeh rendering while sacrificing one stop of light. Personally I would always advise the normal 56mm because the difference is so subtle but if you are curious to know more, you can check out our quick comparison here.