Up until 2017, Fujifilm users in search of a 35mm equivalent prime for the interchangeable series had all but one option: the XF 23mm f/1.4. With its fast aperture and excellent optical quality, it covered a variety of genres from landscapes and street to travel and documentary photography. Indeed, the only aspect that let it down was its large proportions relative to those of Fujifilm X series bodies, especially the smaller models such as the X-T20 or X-A3.

This is why the XF 23mm f/2 R WR was such a welcome addition to the series. Part of Fujifilm’s range of f/2 primes that also includes the XF 35mm f/2 and XF 50mm f/2, it can be considered a smaller, lighter and less expensive version of its f/1.4 sibling.

As always, we couldn’t help but be curious as to whether a tangible difference could be found between the two in terms of construction, optical quality, and speed. The results of our side by side tests can be found below!

Ethics statement:  We were provided samples of the two 23mm lenses for a month-long loan period. We were not asked to write anything about these lenses, nor were we provided with any sort of compensation. Within the article, there are affiliate links. If you buy something after clicking the link, we will receive a small commission. To know more about our ethics, you can visit our full disclosure page. Thank you!

The difference in weight between the 23mm f/1.4 and 23mm f/2 isn’t enormous – in fact, only 120g separates them – but the latter, having a smaller build, is certainly more comfortable to use on smaller Fujifilm X series bodies like the X-T20 or X-E3 for example. Most noticeable is the difference in barrel girth: the f/1.4 version is quite a stout lens whereas the f/2 version is slimmer, especially towards the end of the barrel.

As suggested by the WR abbreviation in its name, the 23mm f/2 is fully weather-sealed against dust, moisture and cold temperatures down to -10°C. The 23mm f/1.4, by comparison, lacks weather-sealing, so you’ll want to be careful if the weather conditions take a turn for the worse.

Although both lenses feature a high-quality metal construction complete with a metal lens mount, I tend to prefer that of the f/2 lens due to its neater, more streamlined design. 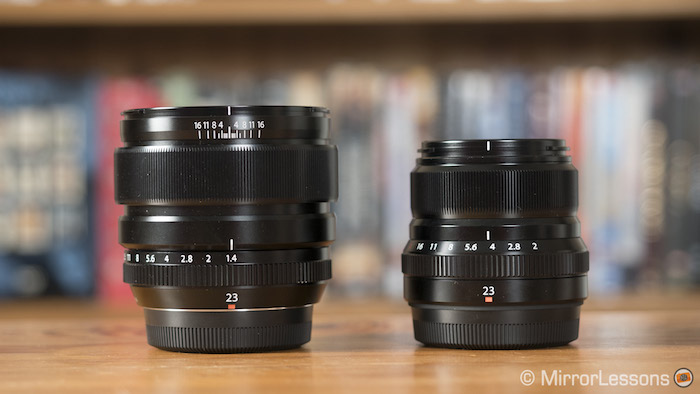 Both lenses come with a ridged aperture ring that turns in 1/3 steps and a smooth fly-by-wire focus ring. A special feature of the 23mm f/1.4’s ring is that it can be snapped back to engage manual focus, revealing a distance scale. (When it isn’t engaged, the ring doesn’t move.) With the 23mm f/2, the only way to enter manual focus mode is via the camera body by using either the physical focus switch (if available) or the menu. 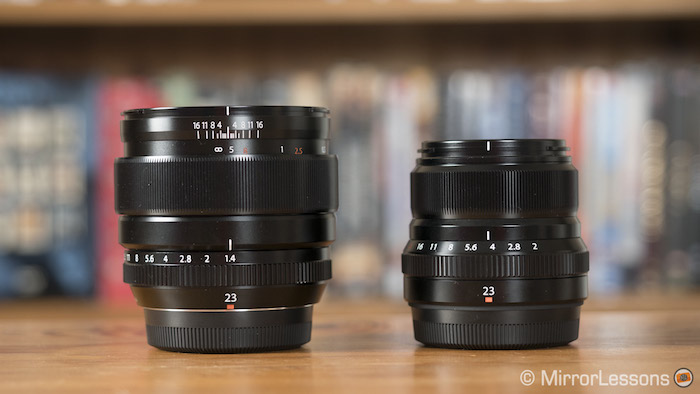 The 23mm f/1.4 has an optical arrangement that is a little more complex than that of the 23mm f/2 but the latter has two additional circular aperture blades (9 versus 7). 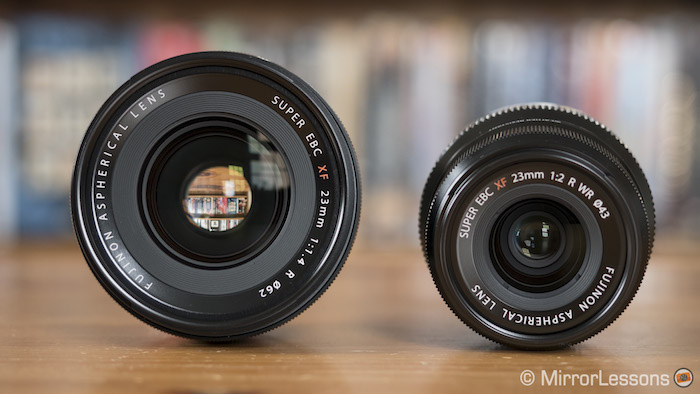 Both lenses utilise an internal focusing system that prevents the front element from moving back and forth. However, the 23mm f/2 benefits from a stepping motor that allows it to acquire focus more quickly and silently than the high-torque DC coreless motor of the 23mm f/1.4.

A filter thread is present on both lenses but that of the 23mm f/1.4 is larger. They each come with their own plastic lens hood and clip-on lens cap. The hood of the 23mm f/2 is round, compact and almost looks like an extension of the barrel, whereas the 23mm f/1.4’s is a large petal-shaped type. 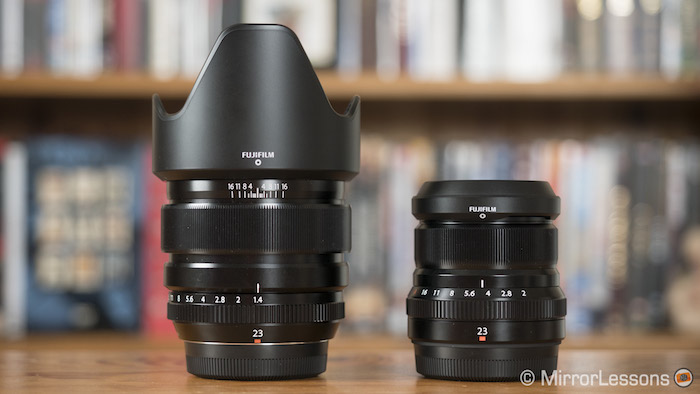 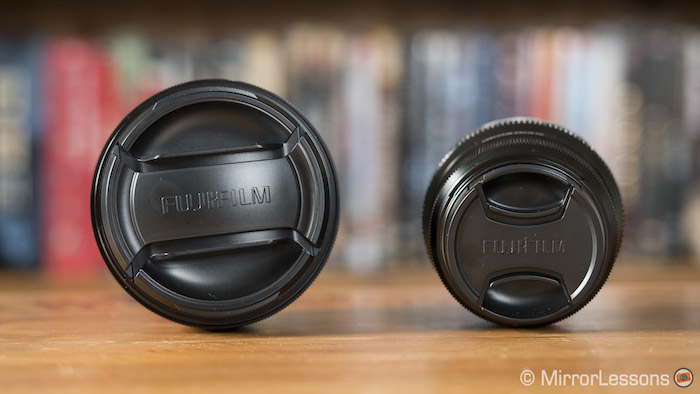 Sadly neither lens features any sort of optical stabilisation, so you’ll need to take care when using slow shutter speeds.

Sharpness is quite comparable from f/2.8 until f/4 where both lenses reach peak performance but from f/5.6 to f/8, the f/2 lens becomes a little sharper. Diffraction starts to become evident from f/11.

In the corners, the f/1.4 lens performs worse at the fastest apertures than the f/2 lens but catches up once both hit f/2.8. The best performance can be found at around f/4 in the case of either lens.

At a close distance, the f/1.4 lens has a clear advantage over the f/2 lens, especially at the fastest apertures.

Beyond f/4, the results look much more similar but the f/1.4 does seem to retain a little more sharpness overall.

Because both the XF 23mm f/1.4 and XF 23mm f/2 have relatively fast maximum apertures, it is worth taking a brief look at the quality of the out-of-focus rendering, or bokeh as it is more commonly referred to.

Comparing the out-of-focus areas (bokeh balls), we can see that those of the f/1.4 lens are larger and rounder when the two lenses are set to their respective maximum apertures (f/1.4 and f/2) and the same focus distance.

Not only do the bokeh balls of the f/2 lens lose their shape more rapidly the closer you get to the edges of the frame, but they also feature a heavier border and a darker centre than those of the f/1.4 lens.

Although the bokeh balls of the f/1.4 lens become smaller at f/2, they remain larger, rounder and generally more pleasing to the eye than those of the f/2 lens.

Due to the slightly faster aperture of the f/1.4 lens, you can also achieve a little more subject separation and shallow depth of field when both lenses are set to the same focus distance.

Chromatic aberrations appear up until f/2.8 in images taken with both lenses in the form of purple fringing in areas of the frame where there is great contrast such as the castle walls against the bright sky in the examples below. I don’t consider it a problem however, as it is quite easy to remove in post production with the dedicated tool.

Fujifilm provides correction for RAW files via lens-specific metadata, which is then accessed by your chosen RAW converter to correct or weaken common optical issues such as vignetting and distortion. For this reason, neither present a problem for real world shooting. The only thing you might notice is some mild corner shading at the fastest apertures but it ceases to show by f/4.

Both lenses feature Fujifilm’s EBC coating, which does a good job of reducing flare and ghosting but doesn’t eliminate it entirely. It can usually be mitigated by adjusting your composition. It generally assumes the form of bright streaks and a series of colourful orbs as you can see in the examples below.

Despite both lenses having a 23mm focal length on paper, we noticed that the f/2 lens produces a slightly wider field of view in the field.

When used on recent Fujifilm X series cameras with the latest 24MP sensor, both lenses are capable of delivering good results in S-AF but there is no doubt that the f/2 version is faster and more reliable overall. We noticed that the camera can sometimes fail to acquire focus with the f/1.4 version, which is something that rarely happens with the f/2 version.

In C-AF, we found that the autofocus mechanism of the f/2 lens was once again snappier and noticeably quieter than the older 23mm lens which also has the tendency to make a whirring noise when in use. The extra speed and silence of the f/2 lens can be attributed to the inner-focus autofocus system driving the lens elements via a quick stepping motor.

As for manual focus, both lenses feature a fly-by-wire focus ring with a ridged surface to give you a better grip but only that of the 23mm f/2 moves freely around the barrel at all times. This means that time it takes to travel from the minimum focus distance to infinity ultimately depends on how quickly or slowly you turn the ring. A slow turn may require multiple rotations whereas a quick turn can take you from one end of the scale to the other in an instant.

That of the 23mm f/1.4, by contrast, can only be turned when pulled back into MF mode. (You’ll always know when MF mode is engaged because pulling back the ring uncovers a useful but very small distance scale.) What’s more, it will only move between the focusing limits, which equates to just under a half rotation. Compared to the well-damped ring of the f/2 lens, it is both noisier and a little less precise in operation.

As with most lenses, these two 23mm primes each have their own set of strengths and weaknesses, some of which might be instrumental in swaying your decision.

The XF 23mm f/1.4, in addition to being a little sharper than the XF 23mm f/2 at close focus distances, also produces a nicer out-of-focus rendering and has a slightly faster aperture.

The XF 23mm, on the other hand, benefits from weather sealing, a more compact design, better close focusing capabilities, and a faster and more discreet AF motor. It is also almost half as expensive as the f/1.4 lens which isn’t a factor to be ignored.

Before settling on one or the other, it is important to reflect on which of these characteristics is important to your style of shooting. If you often work outdoors or own a small X series body, the f/2 probably definitely more sense, whereas those who take lots of environmental portraits may prefer the more pleasant bokeh and added sharpness of the f/1.4 lens.