You are here: Home / Preview / 10 Main Differences Between the Panasonic GH5 and Sony a6500 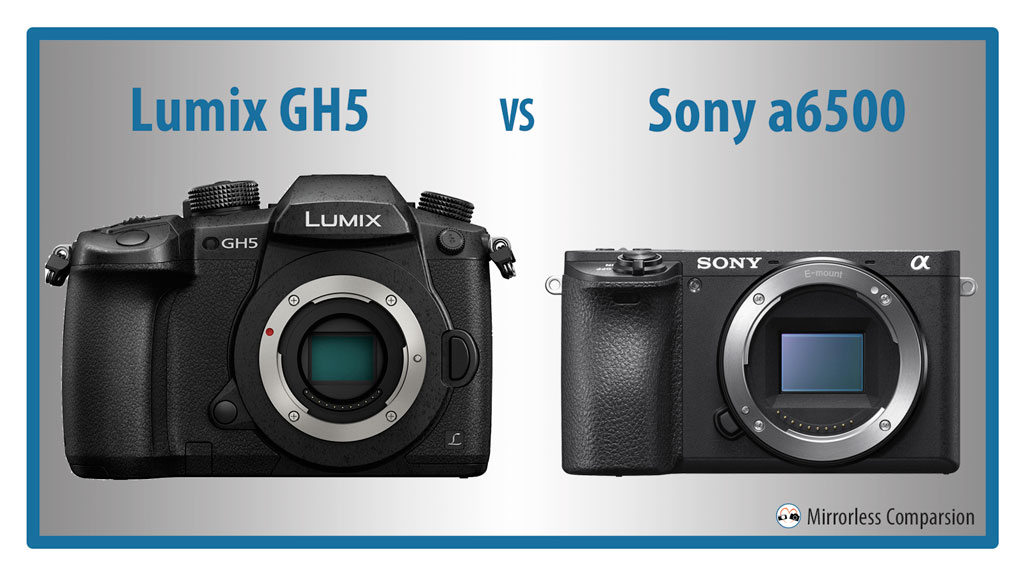 The newly-announced Lumix GH5 has once again placed the GH line-up a step ahead of the competition. In addition to superior video quality and compression, Panasonic has pushed the boundaries with 6K capabilities, a new autofocus system, a new sensor and a more robust body. Although the camera is surely able to deliver excellent results for stills, it is definitely on the video side that we find the most powerful arguments in its favour.

When talking about video and mirrorless cameras, it is impossible not to mention Sony, one of Panasonic’s direct competitors. Its recent line-up of APS-C and full-frame E-mount cameras have proven very popular thanks to the exceptional quality of its sensors. The a6500 is the latest addition and the most advanced APS-C camera released by Sony to date. Its main strength? It provides stunning 4K quality at a reasonable price.

These two cameras differ in many ways, though they also share a few similarities. The most obvious is image stabilisation: both features 5-axis sensor shift technology and are capable of blending sensor and optical stabilisation with select lenses, although with some technical differences in favour of the Panasonic system (Dual I.S. uses 5-axis on the sensor plus 2 axes on the lens as opposed to Sony which uses 3 axes on the sensor and 2 on the lens).

So, what about the main differences? In this comparison preview, we’ve highlighted ten of the most important to help you choose the right model for your needs. Let’s get started!

Ethics statement: The information supplied in this article is based upon the official specifications found on the Panasonic and Sony websites and our personal experience with Panasonic and Sony cameras. We were not asked to write anything about these cameras, nor were we provided any compensation of any kind. Within the article, there are affiliate links. If you decided to buy something after clicking the link, we will receive a small commission. To know more about our ethics, you can visit our full disclosure page. Thank you!

The GH5 incorporates a 20MP Micro Four Thirds sensor without an AA filter. The fast sensor readout coupled with the image processor should reduce rolling shutter when shooting with the electronic shutter and recording movies. It has an ISO sensitivity range of 200 to 25600 ISO with one extended value (100 – low).

The a6500 has an APS-C 24MP sensor with a thinner copper wiring layer that captures more light than traditional sensors of the same size. It also has a front-end LSI chip that increases the buffer capabilities. The ISO sensitivity goes from 100 to 51200. 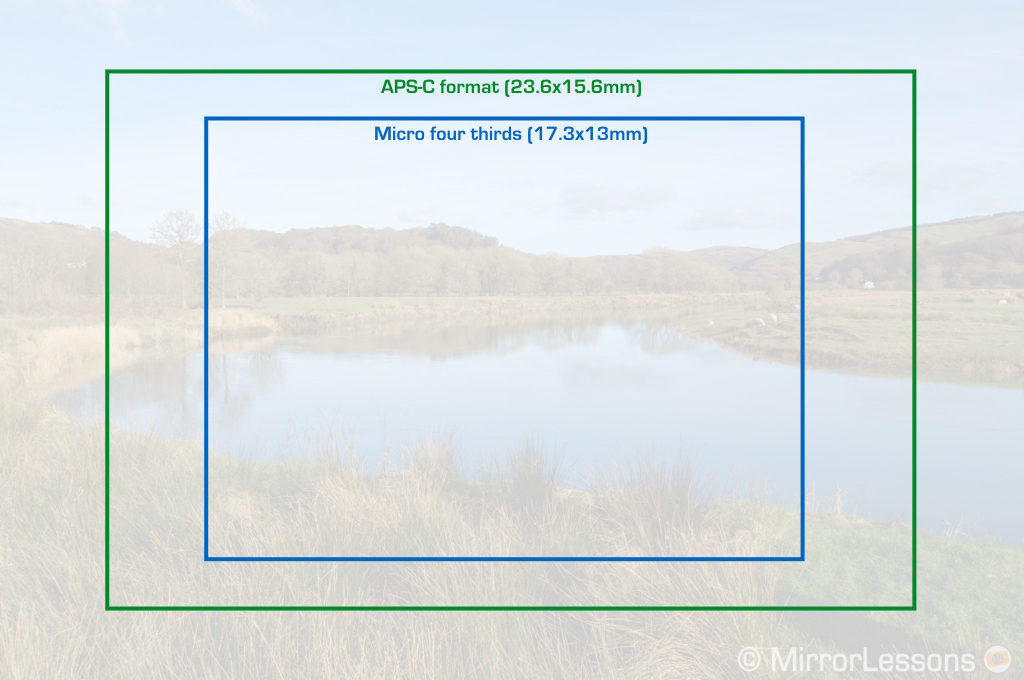 The larger sensor of the Sony camera may suggest better dynamic range and high ISO performance but we are curious to see the improvements made by Panasonic especially in the video department. One area where the GH5 could do better is rolling shutter, an aspect where the a6300 and a6500 can suffer quite a lot.

The GH5 has a newly developed DfD contrast detection AF system with 225 focus points and a 480fps drive speed. The camera has four sets of customisable settings to fine-tune the continuous AF performance (similar to the Fujifilm X-T2) where you can change AF sensitivity, AF area switching sensitivity and Moving object prediction.

The a6500 has a 4D Focus system with 425 phase detection points that cover almost the entire surface of the sensor. The camera utilises High Density Tracking AF technology that concentrates the AF points around the moving subject for better accuracy.

The a6500 (and a6300 that shares the same specifications) has proved to be the fastest mirrorless camera around (along with the Fujifilm X-T2) for both stills and video thanks to its advanced phase detection AF system. Panasonic on the other hand has never managed to catch up to the competition with its DfD technology when it comes to fast moving subjects. Whether the upgraded AF system introduced on the GH5 can reduce that gap has yet to be seen but there should be a definite improvement since the new system is 6 times faster than the first generation DfD.

Concerning burst shooting, the Panasonic can shoot at a maximum speed of 12fps in Single-AF and 9fps in Continuous AF. The buffer capabilities are 100 RAW images and 600 JPGs according to the official specifications.

The a6500 is slightly slower at 11fps but its fastest speed is available in both single and continuous autofocus. Its buffer capabilities are inferior to the GH5 with approximately 300 frames when shooting at 8fps in JPG Fine quality.

The GH5 is the first mirrorless camera to bring 6K resolution but its use is limited to two formats. First you can use the new 6K Photo mode to save an 18MP JPG from any video frame recorded at 30fps (the 4K Photo mode can now be used at 50 or 60fps). Then a firmware update scheduled for the summer of 2017 will bring a 6K anamorphic format at 24fps, allowing you to record a squeezed video using the entire 4:3 sensor that you can then conform to a cinema widescreen format in post production.

As for normal 4K Ultra HD video format, the Panasonic camera can record it at a maximum of 50 or 60fps but also includes a Cinema 4K mode at 24fps.

The a6500 has some hidden 6K capabilities as well, although the story here is different: the camera uses 20MP on the sensor which corresponds to 6K of resolution but it then down-samples the footage to 4K. This ensures full pixel readout and better quality with more details. The only format available is 4K Ultra HD with a maximum frame rate of 30p. The Sony camera also has a similar mode to 4K Photo that allows you to extract 8MP JPG from 4K footage, although the way it works is less intuitive than on Panasonic cameras.

Note that both cameras can record 4K video without any sensor crop, which means the native field of view of the sensor won’t be altered.

If the 6K capabilities of the Panasonic GH5 are exclusive to specific shooting modes, its 4K capabilities put it at the top of the food chain in terms of what you can find on the market today at this price. Thanks to two firmware updates that will come later on, the camera will have superior compression, bitrate and colour details in comparison to the a6500.

More precisely, the GH5 will be able to internally record 4K up to 30fps, Cinema 4K at 24fps and Full HD up to 60fps in 4:2:2 10bit for a maximum bitrate of 400mbps. The possibility to record internally in 4:2:2 10-bit means double the colour information and 64 times the colour depth in comparison to the a6500. The only option that remains 4:2:0 8-bit compression is 4K at 50 or 60fps. All these formats are based on the H264 compression standard.

Although the a6500 is an excellent 4K camera thanks to the sensor, it records 4K with the XAVC S Codec that remains 4:2:0 8-bit. To get better than that, you need to use the HDMI port and an external recorder but the signal output remains 8-bit.

Another important piece of information for filmmakers is that the Panasonic GH5 will be able to record 4K at 30fps or 60fps for an unlimited time like a real camcorder. It won’t have the 30 minute limitation you usually find on this type of product, the a6500 included.

The GH5 will have a rich selection of picture profiles for video including the new 4K HDR, a popular cine profile that can be found on modern TVs and BlueRay. The flat V-log profile will be a $100 paid upgrade however.

On the a6500 you don’t need to pay extra to use the S-Log2 and S-Log3 gamma curves and the camera is rich when it comes to picture profiles designed for video with 7 customisable sets and lots of settings inherited from Sony’s Cine-Alta professional camcorders.

The GH5 has a full-sized HDMI port, something that many filmmakers have been requesting so as to have a more secure and robust connection when attaching an external monitor for example. The a6500 has a micro HDMI port.

Finally, the GH5 comes with a Dual SD card slot that is UHS-II compatible. It will be able to record on both cards simultaneously including 4K video. The a6500 has just one slot and is UHS-I compliant.

The GH5 features an OLED EVF with 3.68 million dots and a magnification of 0.76x. It is centrally positioned at the top of the camera body.

The a6500 has a smaller (0.39-in) viewfinder positioned on the left in the style of a rangefinder camera. It has an OLED panel with 2.36 million dots, 0.70x magnification and a maximum refresh rate of 120fps.

The rear monitor of the Panasonic is a multi-angle type and is slightly larger at 3.2″ with 1.6 million dots and a 3:2 aspect ratio. It is touch sensitive and you can take advantage of this for any operation on the camera, from changing the AF point’s position to navigating the menu.

The a6500 has a rear LCD monitor that can only be tilted up or down. It is slightly smaller (3.0″) with less resolution (921k). Touch sensitivity can only be used to change the focus point.

The design is a relevant difference we can spot right away without touching the cameras or knowing all the specifications.

The Panasonic GH5 is tougher with its DSLR-esque design. It features a magnesium alloy chassis and is completely splash, dust and freeze proof down to -10°C. The grip is larger which should make the camera easier to use with larger lenses.

Concerning the ease of use, you can find 6 customisable function buttons, other buttons already assigned to specific functions like ISO and WB, additional virtual custom buttons on the LCD screen, a shooting mode dial, a drive dial, an AF mode selector and an AF Joystick.

The a6500 features similar capabilities but lacks freeze proofing. It has a smaller and more lightweight design. It features less dials and buttons in comparison to the Panasonic camera but has a handy quick menu (Fn button).

The GH5 is part of the Micro Four Thirds system that has been around for more than eight years now and features Panasonic, Olympus and third-party lenses that are directly compatible with the camera without the need for adapters. Outside DSLRs from Canon or Nikon, it is the system with the widest choice of lenses.

The a6500 doesn’t have a great selection of native APS-C lenses, excluding a few rather expensive gems, but because the E-mount system now includes the full-frame series, you have more choice than ever before. (That said, it should be mentioned that these full-frame lenses generally cost more than the equivalent for Micro Four Thirds.)

The Lumix GH5 is a powerful workhorse designed above all for professional filmmakers. It certainly has excellent still capabilities and can be a good tool for hybrid use, but if you are more interested in stills than video, there are other valid options on the market (although the new 6K Photo feature looks like a great step forward in hybrid photography).

The Sony a6500 has a few advantages like a larger sensor, a smaller form factor and most importantly, a lower price. If you don’t need all the professional video features the GH5 has to offer, the 4K output quality of the Sony is more than enough and has already been used in professional environments. You also get the fastest AF system currently on the market. However, a smaller body also means a smaller battery, less physical controls and a smaller grip than the larger GH5.