The E-M10 III is the latest addition to the OM-D series. Although it has been designed with beginners in mind, it retains most of the advanced features found on other Olympus mirrorless products.

The E-M5 II is a mid-range model that aims squarely at enthusiast photographers. Despite being two years old, it has no trouble standing up against the competition with one of the best image stabilisation systems on the market, a robust construction and a few features normally reserved for the flagship models.

The two cameras have a few things in common, the most important being the Four Thirds sensor: it has 16MP of resolution and a 200-25600 ISO range. The image processor is more modern on the E-M10 mark III however and brings new functionalities such as 4K video and an updated autofocus system.

Curious about how they compare? Then read on to discover the ten main differences between these two Olympus models!

Ethics statement: The information supplied in this article is based on official specifications and our personal experience with OM-D cameras. If we get the chance to test the two cameras side-by-side, we will publish a full comparison. We were not asked to write anything about these cameras, nor were we provided with any sort of compensation. Within the article, there are affiliate links. If you decided to buy something after clicking the link, we will receive a small commission. To know more about our ethics, you can visit our full disclosure page. Thank you!

The first difference concerns the build quality. Unlike the E-M10 III, the E-M5 mark II is fully weather sealed against water, dust and freezing (-10°C). The body is made of magnesium alloy while the E-M10 III has metal plates on the top and bottom. The E-M10 III is a little smaller and lighter than the E-M5 II but we’re talking about tiny differences here.

The E-M5 II has more function buttons including one on the front and four on top. The main shooting mode dial can be locked and you also find a function lever on the rear. The E-M10 III has fewer custom buttons because Olympus decided to assign default, non-changeable settings to many of them, including the 4-way pad on the rear.

Both cameras can be found in black or silver but only the E-M5 II comes in a special titanium edition.

The prominent front grip on the E-M10 III makes it more comfortable to hold with large lenses but renders it incompatible with accessories such as the ECG-3 grip. Olympus is not planning to update the grip so you will have to turn to future third-party products if the grip of the E-M10 III doesn’t satisfy you.

The E-M5 II on the other hand has two options. There is the ECG-2 landscape grip or the HLD-8G landscape grip. The latter features a headphone output and is required to attach the HLD-8 battery grip.

Speaking of batteries, the E-M5 II uses a larger type (BLN-1) in comparison to the BLS-50 of the E-M10 mark III. Although the official specifications are similar in terms of the number of recordable images, the E-M5 II has a Quick Sleep mode that can give you some extra juice. If you add the battery grip option to the equation, it becomes much more capable of lasting longer.

The two cameras use an electronic viewfinder with 2,360k dots but the one on the E-M5 II has better magnification (1.48x vs 1.23x) and a longer eyepoint (21mm vs 19mm). The default refresh rate for both is 60fps but there’s a setting to increase it to 120fps, albeit with a loss in resolution.

Both cameras use a contrast detection system but the E-M10 III features more points (121 vs 81) and a faster image processor that should make the new camera faster and more reactive in comparison to the E-M5 II.

The AF areas available remain the same (All, 9-Group and Single target) but only the E-M5 II has the small single target option. There is Eye and Face detection but on the E-M10 III you can’t select left or right eye priority, only near side priority.

The E-M5 II does better for continuous shooting: it can go as fast as 10fps in High mode and 5fps in Low mode with continuous AF. The E-M10 III does 8.6fps and 4.5fps respectively and has slightly better buffer capabilities as a result (22 vs 16 RAW frames).

The E-M10 III features 5-axis stabilisation just like the E-M5 mark II but the latter has a more advanced mechanism that gives you a 1 stop advantage (5Ev vs 4Ev by CIPA standards). In our real world testing, we easily managed a 1s shot hand held with the E-M5 while with the E-M10 III you do struggle more to get that result.

Furthermore, the E-M5 mark II is compatible with Dual IS and select Olympus lenses. It allows you to take advantage of both sensor and optical stabilisation at the same time, which improves the performance even more.

The stabilisation system of the two cameras can be used for video as well with two options: M-IS1 where only the mechanical shift of the sensor is used and M-IS2 where the camera adds software stabilisation as well. It works very well but more complex movements can exhibit distortion (jello effects).

The E-M5 II takes advantage of the sensor shift technology to increase the native resolution of its sensor. It does this by taking 8 shots in rapid succession and moving the sensor by half a pixel in between each shot. The images are then merged to create a 40MP (JPG) or 70MP (RAW) image. 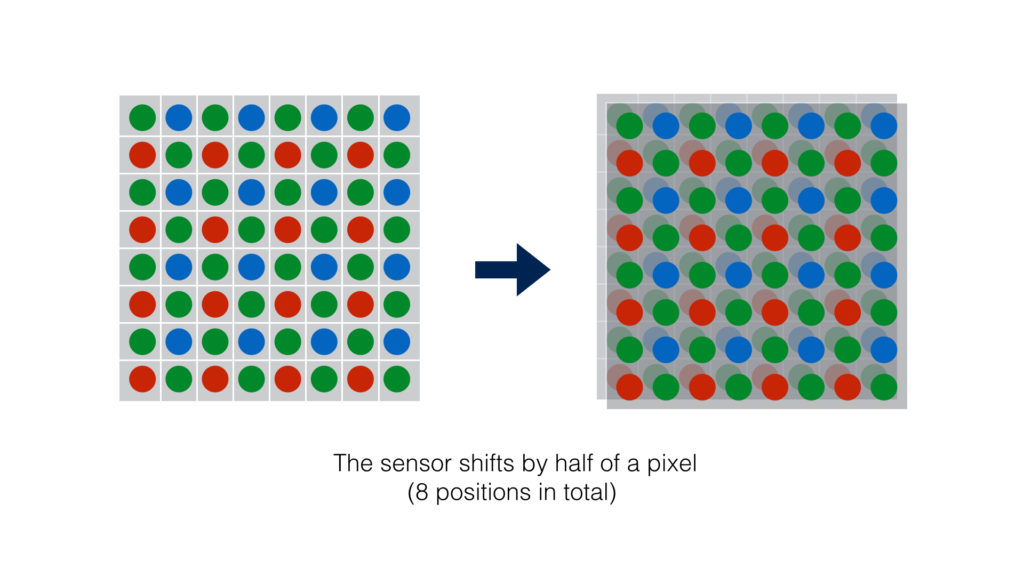 There are some limitations like artefacts when moving elements are in the frame and the need to place the camera on a tripod. For still life work or landscapes, it can be quite interesting however.

The E-M5 II was Olympus’ first attempt at creating a more serious camera for video. However the quality and options were still limited in comparison to the competition. The footage recorded in 1080p wasn’t bad but the 5-axis stabilisation remained the most attractive specification for video, despite having a few limitations of its own like distortion with dynamic movements. You can choose between a Super Fine/ALL-Intra codec at 77mbps (max. 30p) or a more standard Fine/IPB compression at 52mbps (up to 60p).

The E-M10 III benefits from 4K recording up to 30p at 102mbps and a 120fps slow motion option in 720p. It does this without cropping the sensor.

For both cameras the ISO range goes up to 6400. Unlike the E-M10 III, the E-M5 II has a Flat picture profile that increases the dynamic range but it’s not a real Log curve. It has a mic input built into the body but the only way to have a headphone output is with the optional landscape grip. The E-M10, by contrast, doesn’t feature any input or output at all.

Below you can see a quick video made by Cinema 5D in 4K with the new E-M10 III. Note that colour grading was applied in post production.

Missing from the E-M10 III is the RC mode that allows you to use off-camera flash via optical communication. The E-M5 II can work with 4 channels / 4 groups and the small FL-LM3 provided with the camera can trigger other units. You will find a flash sync socket on the front.

The E-M10 III has a built-in flash that is less powerful than the FL-LM3. Both cameras have a maximum sync speed of 1/250s and are compatible with High Speed Sync (FP mode).

The E-M5 mark II was Olympus’s most advanced camera for video before the arrival of the E-M1 II last year and now the E-M10 III with its 4K capabilities. It retains a few advantages like the mic input and the Flat profile but it is also true that you can find better video quality and features from the competition. So where does this leave us?

Well, unless you are keen on weather sealing, extra features like the High Res Shot or the possibility to use a battery grip, the appealing price point of the E-M10 III, along with the more advanced AF system, should be enough to clinch the decision. Or you can simply wait until the E-M5 III comes along! 😉

Check price of the Olympus OM-D E-M5 II on